A knee tear injury is on the rise among children and teens, particularly girls, who play sports, say pediatricians who recommend extra training before hitting the soccer field, gymnastics studio or basketball court. Injuries to the anterior cruciate ligament, or ACL, in athletes age 18 and younger have increased over the last 20 years. A report in Monday’s issue of the journal Pediatrics offers information for parents, young athletes and clinicians on preventing, diagnosing and treating the injury before and after puberty

The ACL is one of four major ligaments that hold the bones of the knee together. The ligaments also work to stabilize the knee during movement. It can tear when athletes quickly change direction, land from a jump incorrectly, or slow down or stop suddenly.

ACL injury rates increase sharply during puberty, especially for girls, who have higher rates than boys when playing similar sports. 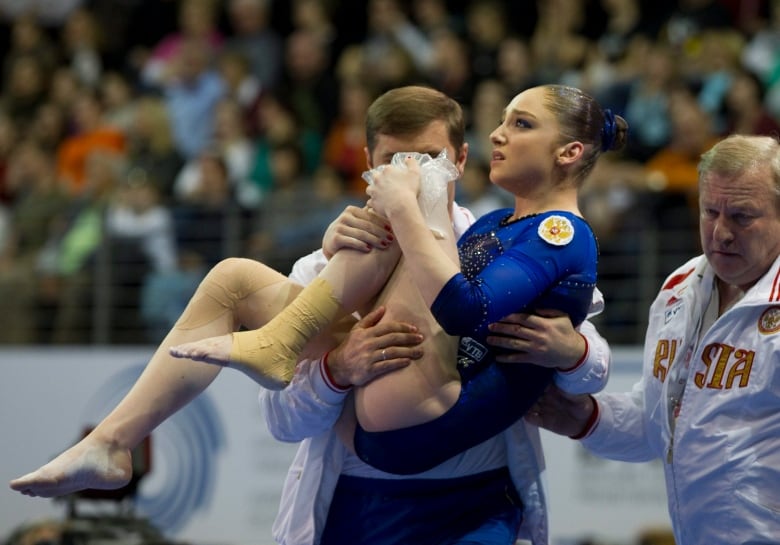 Aliya Mustafina of Russia gets assistance after suffering from an injury at the vault during the women’s individual all-around gymnastics final in 2011. Mustafina had surgery for an ACL injury, Gero Breloer, Associated Press

“After puberty, girls have a machine motor mismatch,” study author Timothy Hewett of the Council on Sports Medicine and Fitness said, in a release. “In contrast, boys get even more powerful relative to their body size after their growth spurt. The good news is that we’ve shown that with neuromuscular training, we can boost the power of girls’ neuromuscular engine, and reduce their risk of ACL injuries.”

A few other factors are thought to be behind the increasing ACL injury rates, including the growing number of kids and teens participating in organized sports, more intense training at younger ages and greater rate of diagnosis thanks to increased awareness and advanced imaging.

Female athletes between 15 and 20 years old accounted for the largest number of ACL injuries.

At the high school level in the U.S., girl’s soccer has the most ACL injuries, followed by boy’s football, girl’s basketball, girl’s gymnastics, and lacrosse for both. The study’s authors called the treatment of ACL in young athletes “challenging and controversial,” but that the tear is not a surgical emergency.

Ideally, surgical treatment would be postponed until the athlete’s skeletal structure is fully mature. Now, less invasive surgical techniques can be used and ACL surgery is about 90 per cent successful in restoring knee stability and patient satisfaction, they said.

Regardless of treatment, athletes with ACL tears are up to 10 times more likely to develop early-onset degenerative knee osteoarthritis that can lead to chronic pain and disability.

The authors suggested that pediatricians and orthopedic surgeons direct patients at highest risk of ACL injuries, such as adolescent female athletes or those with a family history, to resources such as the Pediatric Academy’s Council on Sports Medicine and Fitness.

It’s estimated that at least 70 per cent of ACL injuries are non-contact in nature.