Most telemark skiers worry the most about injuring their knees while earning their turns. The study certainly supports this concern, as the most common injury is to the knee (about 30-35% of all injuries reported). There are basically 2 groups of injuries: sprains and ligament tears. Mild sprains heal rapidly and may involve the medial collateral ligament (MCL). The more significant season-ending injuries are those that involve the MCL and/or the anterior cruciate ligament (ACL).

The combination of torsional stress and valgus force on the knee results in the common MCL/ACL injury shown in the animated sequence here on the right. This injury is commonly found when the skier catches the inner edge of a lightly weighted or non-weighted ski.

This can occur when the uphill ski—early in the initiation of a turn—is not weighted properly or is flat on the snow instead of being used to carve the early part of the turn.

Both of these injuries have one common feature, they evolve when the rear ski is not properly edged and/or weighted. In other words, the inside edge of the rear ski is cutting into the snow instead of the outside edge.

In the combined MCL/ACL injury, the front inside edge is caught then the ski is pulled out away from the body and center of balance, twisting the knee using the ski tip as the fulcrum.

In the pure ACL injury, the tail of the ski is usually weighted and contacting the snow, and as the skier falls back on to the tail, it pushes the lower leg forward, placing shearing forces across the flexed knee.

The following principles will very likely reduce your risk of injury if you can put them into practice.

Instead, try to fall along the fall line or to the side. Keeping hands forward will encourage you to fall forward and not sit down on your tails. This will prevent the majority of the forces that cause knee injuries from coming into play. It places the knee in a more stable position (less hyperflexed) and keeps the ankles and hips flexed as well. Unlike alpine skiing, the forward fall is quite a bit safer with a free heel boot.

The risk of sustaining a tibial fracture is neglible since the heel will readily lift off the ski and the toe flexes forward easily in tele gear.

This positions you to fall forward in the event of a sudden edge catching on the snow- a common cause of injuries at lift areas.

One exercise to help with this technique is to work on deliberately weighting your inside ski early in the turn, before you turn down the fall line, followed by weighting the downhill ski. [Do this on an easy slope, as it is an exercise that feels very awkward for most at first].

This will cause your inside ski to carve a tighter turn than the downhill ski, causing a slight flare with the tips of your skis. This feels very different from the stem turns that you learn on but forces you to edge, and therefore use, the uphill ski properly in your turn. Ideally, after you have mastered the use of the uphill ski, then you focus less on early turn initiation with the uphill ski and move back to using both skis together. But now, they will be weighted more equally and carve parallel to each other the entire turn.

If you unweight well between turns, you are less likely to catch your edge. Again, moderate flexion of the ankles, hips, and knees will allow for a light spring-like effect to unweight both skis when transitioning between turns. Also, once you feel a fall is inevitable, getting your skis out of the snow will keep them from getting caught and taking your knees with them.

In other words, when you know you are losing it, pop up out of the snow to lift your feet and edges out of the snow. Though you may feel that you are being asked to take all your falls head on, remember– you need your knees, not your head, to ski.

1. The relative risk of knee ligament injury is significantly lower among skiers with plastic boots. Controlling for experience (skill level) and bindings still showed this was a significant difference. My suspicion is that the greater stability of the plastic boot may prevent inadvertent falls involving the wrong edge of the ski catching the snow (a common mechanism of knee injuries).

2. Use of plastic boots was more common in the Expert and Extreme groups (>70%).

3. The use of plastic boot has increased dramatically in the past two years from 38% to 51%. Releasable bindings were used by 11.8% of the skiers, and these skiers had 11% knee injuries in the study groups. The survival analysis shows a definite trend to lower injury rates with the releasable bindings, though it is not statistically significant (but very close). It seems probable with a larger data set that it would be significant since this trend has been consistent. The 1997-8 ski season was particularly devastating among backcountry skiers with a higher rate of avalanche fatalities due to several group fatalities this year. The 1998-1999 season continued the trend of more backcountry deaths, particularly among snowboarders near ski areas. The routine use of avalanche beacons in the backcountry has become the standard practice of many skiers in the North America even though incidents involving skiers in this part of the country are quite low.

The number of deaths each year due to avalanche among backcountry skiers (not heli-skiers) in the US and Canada is usually less than ten (6 in 1996) and 40 percent occur during high avalanche risk periods. Avoidance of these situations is preferable to the use of beacons as a thin safety net. The beacon can’t dig you out. Beware of the group bravado effect—we tend to take more risk when we ski in a group but it is a false sense of security. Never ski a slope you wouldn’t ski alone.

In the past, skiing injuries have be described in terms of thousands skier-days, that is the number of injuries that occur for every 1000 skiers skiing one day each. Though there are different ways to describe the injury rate, this is conceptually one that most of us can relate to well.

The overall injury rate is 8.7/1000 skier-days, the vast majority occurring at lift areas. This may seem high compare to alpine skiing whose rate is quoted at 3-4/1000, but up to 60 % of those injuries go unreported to physicians or the ski patrol which is where those numbers came from in most of those studies. In self-reporting alpine skiing studies, the rate of injury is about 9.8/1000 skier-days in the late 70’s but with the decrease in alpine skiing injuries, the real rate is more likely to be 7/1000 based on more recent estimates. 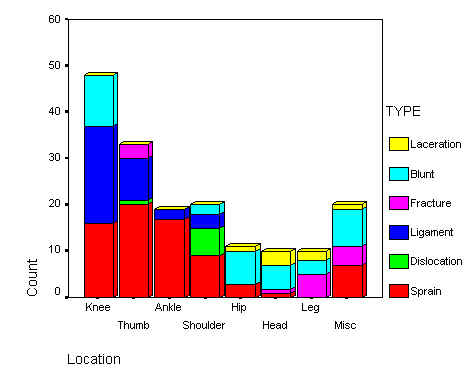 Snow conditions during which injuries happen cover the gamut of what skiers experience during the season.