A versatile, portable exosuit that assists both walking and running highlights the potential for lightweight and non-restrictive wearable robots outside the lab. 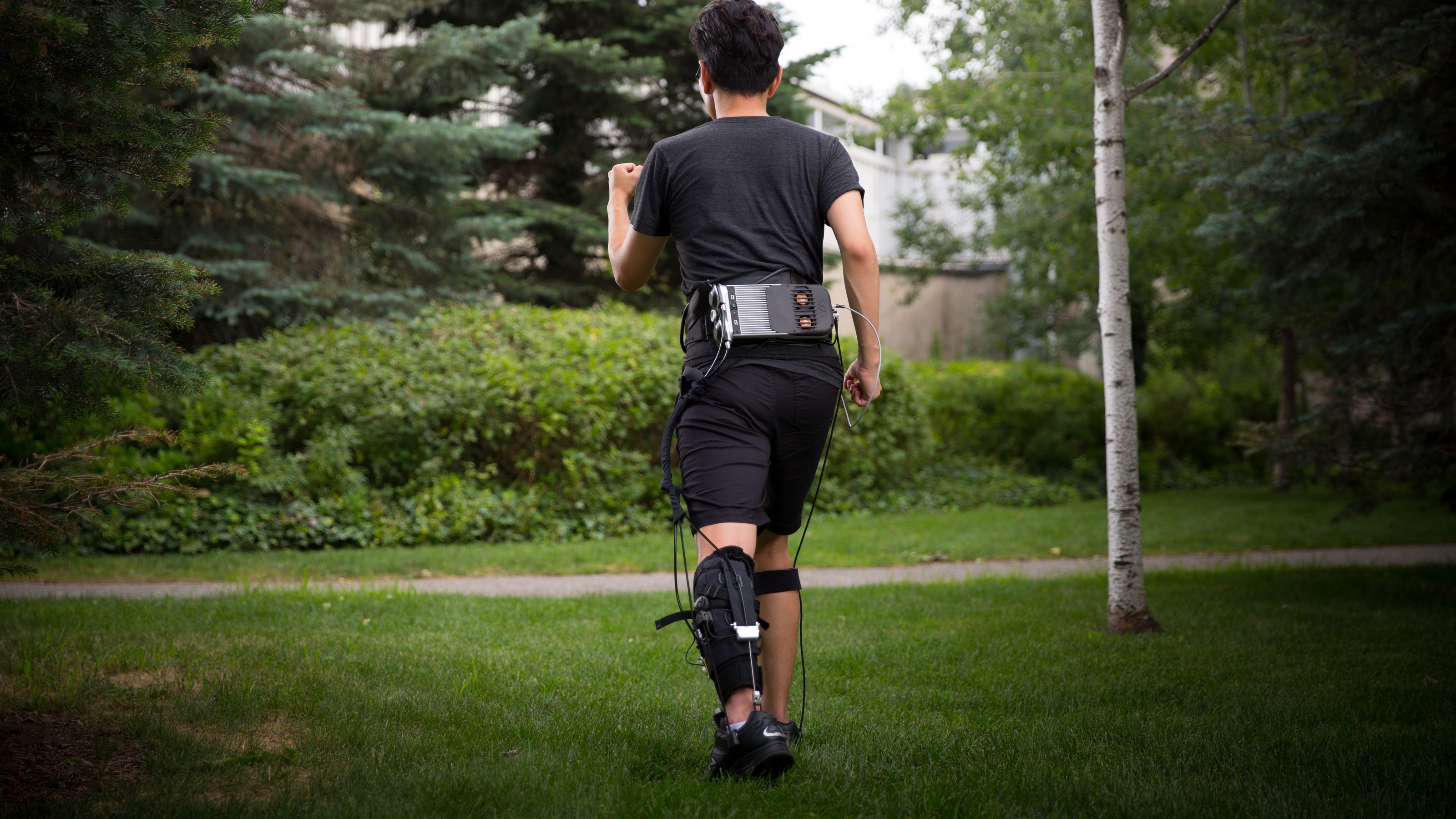 Cambridge MA – Between walking at a leisurely pace and running for your life, human gaits can cover a wide range of speeds. Typically, we choose the gait that allows us to consume the least amount of energy at a given speed. For example, at low speeds, the metabolic rate of walking is lower than that of running in a slow jog; vice versa at high speeds, the metabolic cost of running is lower than that of speed walking.

Researchers in academic and industry labs have previously developed robotic devices for rehabilitation and other areas of life that can either assist walking or running, but no untethered portable device could efficiently do both. Assisting walking and running with a single device is challenging because of the fundamentally different biomechanics of the two gaits. However, both gaits have in common an extension of the hip joint, which starts around the time when the foot comes in contact with the ground and requires considerable energy for propelling the body forward.

As reported today in Science, a team of researchers at Harvard’s Wyss Institute for Biologically Inspired Engineering and John A. Paulson School of Engineering and Applied Sciences (SEAS), and the University of Nebraska Omaha has developed a portable exosuit that assists with gait-specific hip extension during both walking and running. Their lightweight exosuit is made of textile components worn at the waist and thighs, and a mobile actuation system attached to the lower back which is controlled by an algorithm that can robustly detect the transition from walking to running and vice versa.

The team first showed that the exosuit worn by users in treadmill-based indoor tests, on average, reduced their metabolic costs of walking by 9.3% and of running by 4% compared to when they were walking and running without the device. “We were excited to see that the device also performed well during uphill walking, at different running speeds and during overground testing outside, which showed the versatility of the system,” said Conor Walsh PhD, who led the study. Walsh is a Core Faculty member of the Wyss Institute, the Gordon McKay Professor of Engineering and Applied Sciences at SEAS, and Founder of the Harvard Biodesign Lab. “While the metabolic reductions we found are modest, our study demonstrates that it is possible to have a portable wearable robot assist more than just a single activity, helping to pave the way for these systems to become ubiquitous in our lives,” said Walsh.

The hip exosuit was developed as part of the Defense Advanced Research Projects Agency (DARPA)’s former Warrior Web program and is the culmination of years of research and optimization of the soft exosuit technology by the team. A previous multi-joint exosuit developed by the team could assist both the hip and ankle during walking, and a medical version of the exosuit aimed at improving gait rehabilitation for stroke survivors is now commercially available in the US and Europe, via a collaboration with ReWalk Robotics. 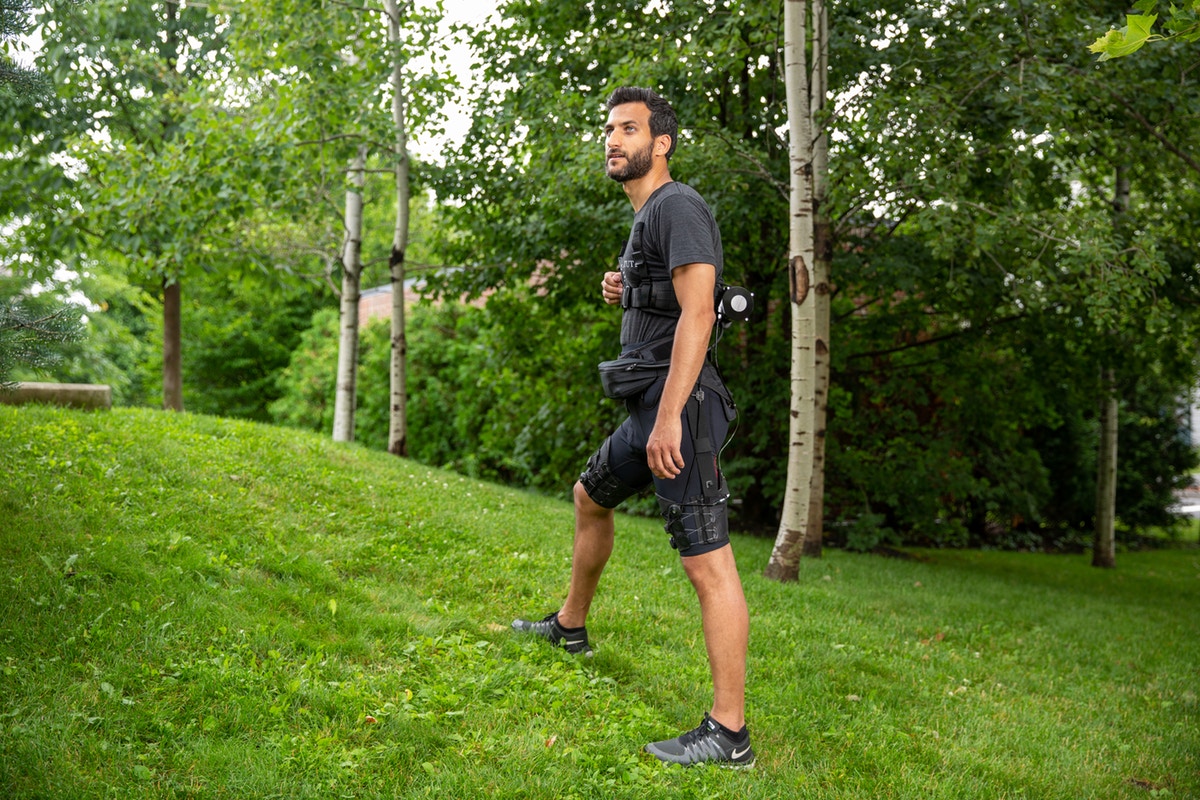 The team’s most recent hip-assisting exosuit is designed to be simpler and lighter weight compared to their past multi-joint exosuit. It assists the wearer via a cable actuation system. The actuation cables apply a tensile force between the waist belt and thigh wraps to generate an external extension torque at the hip joint that works in concert with the gluteal muscles.

The device weighs 5kg in total with more than 90% of its weight located close to the body’s center of mass. “This approach to concentrating the weight, combined with the flexible apparel interface, minimizes the energetic burden and movement restriction to the wearer,” said co-first-author Jinsoo Kim, a SEAS graduate student in Walsh’s group. “This is important for walking, but even more so for running as the limbs move back and forth much faster.” Kim shared the first-authorship with Giuk Lee PhD, a former postdoctoral fellow on Walsh’s team and now Assistant Professor at Chung-Ang University in Seoul, South Korea.

A major challenge the team had to solve was that the exosuit needed to be able to distinguish between walking and running gaits and change its actuation profiles accordingly with the right amount of assistance provided at the right time of the gait cycle.

To explain the different kinetics during the gait cycles, biomechanists often compare walking to the motions of an inverted pendulum and running to the motions of a spring-mass system. During walking, the body’s center of mass moves upward after heel-strike, then reaches maximum height at the middle of the stance phase to descend towards the end of the stance phase. In running, the movement of the center of mass is opposite. It descends towards a minimum height at the middle of the stance phase and then moves upward towards push-off.

“We took advantage of these biomechanical insights to develop our biologically inspired gait classification algorithm that can robustly and reliably detect a transition from one gait to the other by monitoring the acceleration of an individual’s center of mass with sensors that are attached to the body,” said co-corresponding author Philippe Malcolm PhD, Assistant Professor at University of Nebraska Omaha. “Once a gait transition is detected, the exosuit automatically adjusts the timing of its actuation profile to assist the other gait, as we demonstrated by its ability to reduce metabolic oxygen consumption in wearers.” 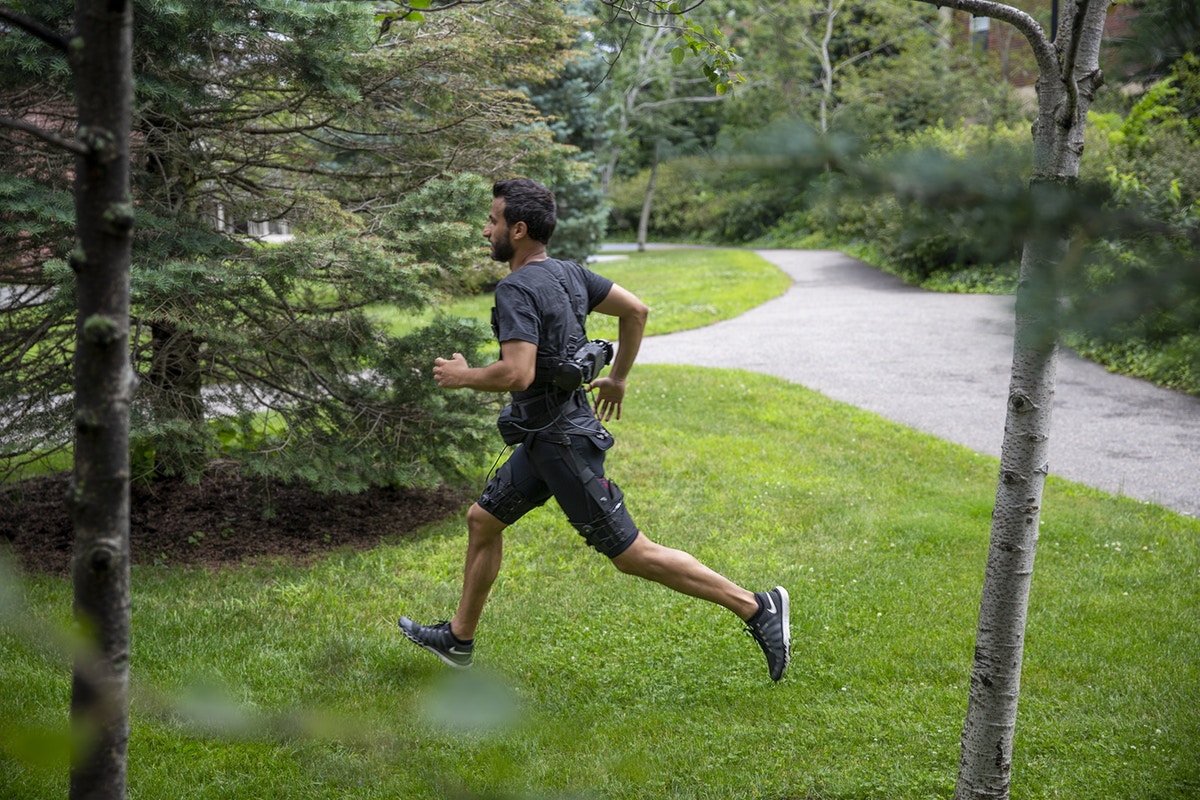 The team’s portable exosuit is made of textile components worn at the waist and thighs, and a mobile actuation system attached to the lower back which uses an algorithm that robustly predicts transitions between walking and running gaits. Wyss Institute at Harvard University

In ongoing work, the team is focused on optimizing all aspects of the technology, including further reducing weight, individualizing assistance and improving ease of use. “It is very satisfying to see how far our approach has come,” said Walsh, “and we are excited to continue to apply it to a range of applications, including assisting those with gait impairments, industry workers at risk of injury performing physically strenuous tasks, or recreational weekend warriors.”

“This breakthrough study coming out of the Wyss Institute’s Bioinspired Soft Robotics platform gives us a glimpse into a future where wearable robotic devices can improve the lives of the healthy, as well as serve those with injuries or in need of rehabilitation,” said Wyss Institute Founding Director Donald Ingber MD PhD, who is also the Judah Folkman Professor of Vascular Biology at Harvard Medical School, the Vascular Biology Program at Boston Children’s Hospital, and Professor of Bioengineering at SEAS.