MIT engineers have designed pliable, 3-D-printed mesh materials whose flexibility and toughness they can tune to emulate and support softer tissues such as muscles and tendons. 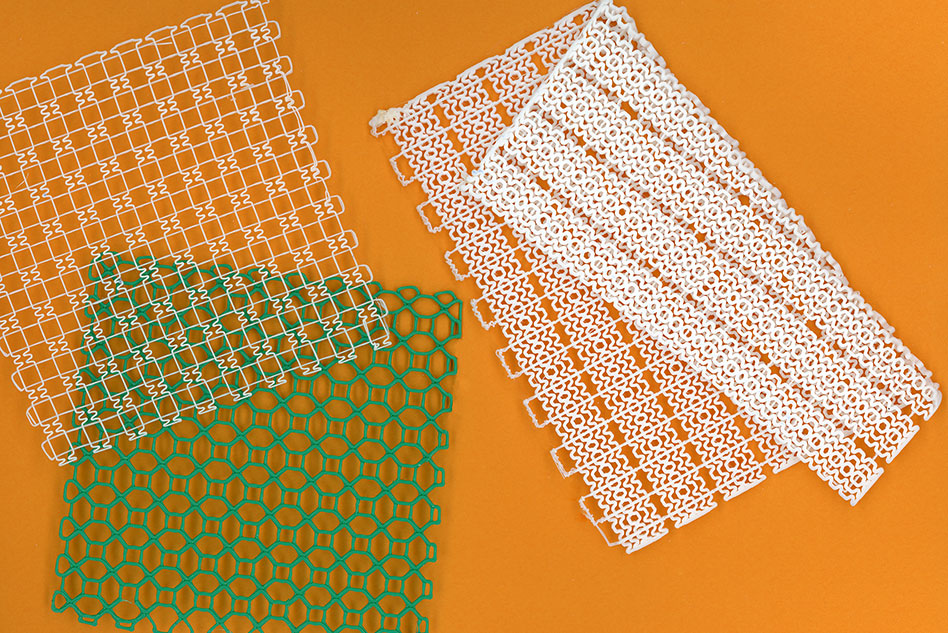 MIT engineers 3-D-print stretchy mesh, with customized patterns designed to be flexible yet strong, for use in ankle and knee braces. Felice Frankel, MIT 2019

Hearing aids, dental crowns, and limb prosthetics are some of the medical devices that can now be digitally designed and customized for individual patients, thanks to 3-D printing. However, these devices are typically designed to replace or support bones and other rigid parts of the body, and are often printed from solid, relatively inflexible material.

Now MIT engineers have designed pliable, 3-D-printed mesh materials whose flexibility and toughness they can tune to emulate and support softer tissues such as muscles and tendons. They can tailor the intricate structures in each mesh, and they envision the tough yet stretchy fabric-like material being used as personalized, wearable supports, including ankle or knee braces, and even implantable devices, such as hernia meshes, that better match to a person’s body.

As a demonstration, the team printed a flexible mesh for use in an ankle brace. They tailored the mesh’s structure to prevent the ankle from turning inward — a common cause of injury — while allowing the joint to move freely in other directions. The researchers also fabricated a knee brace design that could conform to the knee even as it bends. And, they produced a glove with a 3-D-printed mesh sewn into its top surface, which conforms to a wearer’s knuckles, providing resistance against involuntary clenching that can occur following a stroke.

“This work is new in that it focuses on the mechanical properties and geometries required to support soft tissues,” says Sebastian Pattinson, who conducted the research as a postdoc at MIT. 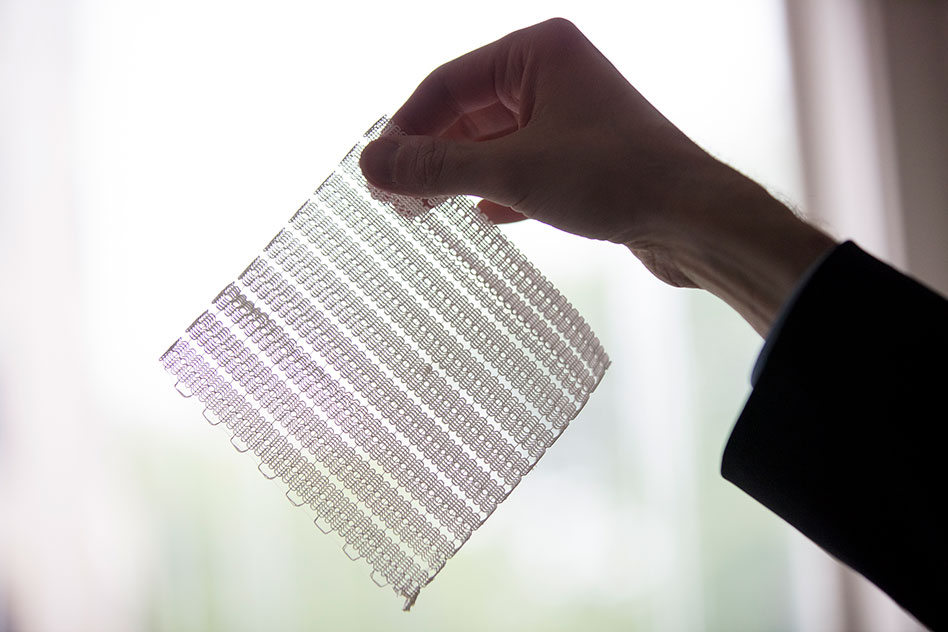 3-D meshes are designed to be lightweight and conformable, similar to fabric and textiles. M. Scott Brauer, MIT 2019

The team’s flexible meshes were inspired by the pliable, conformable nature of fabrics.

“3-D-printed clothing and devices tend to be very bulky,” Pattinson says. “We were trying to think of how we can make 3-D-printed constructs more flexible and comfortable, like textiles and fabrics.”

Pattinson found further inspiration in collagen, the structural protein that makes up much of the body’s soft tissues and is found in ligaments, tendons, and muscles. Under a microscope, collagen can resemble curvy, intertwined strands, similar to loosely braided elastic ribbons. When stretched, this collagen initially does so easily, as the kinks in its structure straighten out. But once taut, the strands are harder to extend.

Inspired by collagen’s molecular structure, Pattinson designed wavy patterns, which he 3-D-printed using thermoplastic polyurethane as the printing material. He then fabricated a mesh configuration to resemble stretchy yet tough, pliable fabric. The taller he designed the waves, the more the mesh could be stretched at low strain before becoming more stiff — a design principle that can help to tailor a mesh’s degree of flexibility and helped it to mimic soft tissue.

The researchers printed a long strip of the mesh and tested its support on the ankles of several healthy volunteers. For each volunteer, the team adhered a strip along the length of the outside of the ankle, in an orientation that they predicted would support the ankle if it turned inward. They then put each volunteer’s ankle into an ankle stiffness measurement robot — named, logically, Anklebot — that was developed in Hogan’s lab. The Anklebot moved their ankle in 12 different directions, and then measured the force the ankle exerted with each movement, with the mesh and without it, to understand how the mesh affected the ankle’s stiffness in different directions. 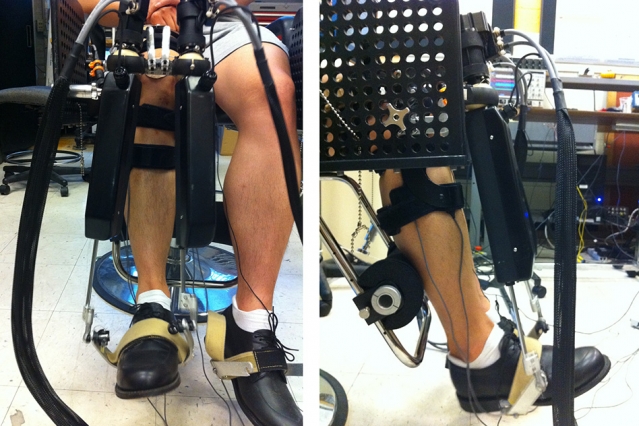 Anklebot helps determine ankle stiffness. A front and side view of a volunteer wearing the Anklebot in a seated posture. During experiments, the robot moved the ankle and recorded its stiffness in multiple directions. Hyunglae Lee, MIT 2013

In general, they found the mesh increased the ankle’s stiffness during inversion, while leaving it relatively unaffected as it moved in other directions.

“The beauty of this technique lies in its simplicity and versatility. Mesh can be made on a basic desktop 3-D printer, and the mechanics can be tailored to precisely match those of soft tissue,” Hart says.

The team’s ankle brace was made using relatively stretchy material. But for other applications, such as implantable hernia meshes, it might be useful to include a stiffer material, that is at the same time just as conformable. To this end, the team developed a way to incorporate stronger and stiffer fibers and threads into a pliable mesh, by printing stainless steel fibers over regions of an elastic mesh where stiffer properties would be needed, then printing a third elastic layer over the steel to sandwich the stiffer thread into the mesh.

The combination of stiff and elastic materials can give a mesh the ability to stretch easily up to a point, after which it starts to stiffen, providing stronger support to prevent, for instance, a muscle from overstraining.

The team also developed two other techniques to give the printed mesh an almost fabric-like quality, enabling it to conform easily to the body, even while in motion.

“One of the reasons textiles are so flexible is that the fibers are able to move relative to each other easily,” Pattinson says. “We also wanted to mimic that capability in the 3-D-printed parts.”

In traditional 3-D printing, a material is printed through a heated nozzle, layer by layer. When heated polymer is extruded it bonds with the layer underneath it. Pattinson found that, once he printed a first layer, if he raised the print nozzle slightly, the material coming out of the nozzle would take a bit longer to land on the layer below, giving the material time to cool. As a result, it would be less sticky. By printing a mesh pattern in this way, Pattinson was able to create a layers that, rather than being fully bonded, were free to move relative to each other, and he demonstrated this in a multilayer mesh that draped over and conformed to the shape of a golf ball.

Finally, the team designed meshes that incorporated auxetic structures — patterns that become wider when you pull on them. For instance, they were able to print meshes, the middle of which consisted of structures that, when stretched, became wider rather than contracting as a normal mesh would. This property is useful for supporting highly curved surfaces of the body. To that end, the researchers fashioned an auxetic mesh into a potential knee brace design and found that it conformed to the joint.

“There’s potential to make all sorts of devices that interface with the human body,” Pattinson says. Surgical meshes, orthoses, even cardiovascular devices like stents — you can imagine all potentially benefiting from the kinds of structures we show.”