Muscle composition and structure is altered in children with cerebral palsy — with greater amounts of collagen in the muscles’ network of proteins and sugars — making these patients more prone to stiffness and contractures that prevent normal movement, a study finds. The study was published in the journal Connective Tissue Research. 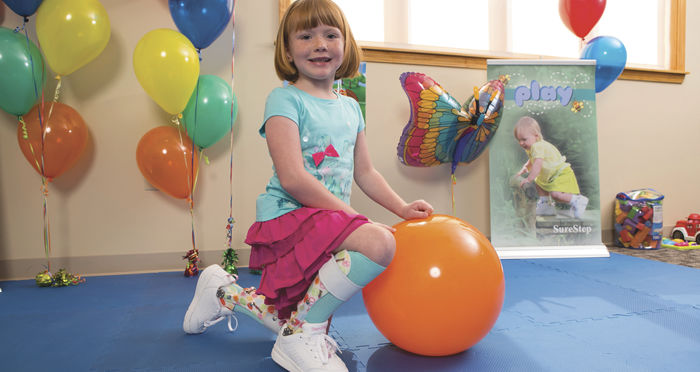 Joint contractures in children with cerebral palsy (CP), which affect range of motion and cause pain, are a highly disabling problem for which current treatments have limited efficacy.

When muscles or tendons remain too tight for too long, contractures occur, resulting in a shortening of these tissues. Contractures develop when otherwise normally elastic tissues are replaced by inelastic, fiber-like tissue, which make it hard to stretch the area.

The muscles of children with CP are stiffer than normal and endure greater strain, which contributes to the formation of contractures and prevents normal movement. Yet, the exact reason why this happens remains unknown. Prior research has shown no differences in the rigidity of individual muscle cells between patients with CP and healthy people (controls).

However, the extracellular matrix (ECM) — a mesh of proteins, sugars, water, and minerals that acts as a scaffold for tissues and cells — has been found to undergo drastic changes in CP, implicating it as the source of excessive stiffness in muscle contractures.

Based on these observations, researchers in the College of Biological Sciences at UC Davis sought to investigate whether changes in the composition and structure of the extracellular matrix could account for the increased stiffness observed in the muscles of CP patients.

The team also examined the architecture of the extracellular matrix, looking for changes that would explain an increased likelihood of contractures.

The researchers focused on collagens because they are the main load-bearing structures within the ECM. Collagen is the major connective-tissue protein and an integral constituent of muscles, tendons, and skin. Some collagen types, like collagen type I, join together in long and extremely stretchable fibrils that organize themselves in bundles, called collagen fibers. These fibers are crucial for allowing tendons to connect muscles with bones and withstand large loads.

Type I and III  are the most common type of collagens, with type I associated with high tissue stiffness and type III with tissue compliance. Other types of collagen link them to each other or to other matrix components, including type IV and type VI.

The team also measured collagen crosslinks: bonds that tie together two or more such molecules, further contributing to the strengthening and stiffening of collagen networks.

The ECM also includes abundant glycoproteins — proteins bound to sugars — including proteoglycans such as decorin and biglycan and other sugars like hyaluronic acid. These serve to hydrate and maintain the matrix’s viscosity and elasticity, while some also interact with collagens.

As expected, muscle fibers from patients with CP were about 50% stiffer than samples from typically developing children.

The amount of total collagen “had dramatically increased” in the muscles of children with CP compared with typically developing children, the researchers found. All collagen types showed 3–5 fold increases, as did collagen crosslinks, total proteoglycans, and uronic acid.

Type I collagen, total collagen, and total proteoglycan were good predictors of stiffness, whereas the amount of biglycan was linked with lower stiffness.

Importantly, the collagen I/III ratio was the critical predictor of muscle stiffness in children with cerebral palsy.

“These data emphasize that ECM components, including fibrillar collagens, are critical in determining stiffness and highlight potential negative regulators (biglycan) that may play a therapeutic role in increasing muscle compliance in contractures of patients with cerebral palsy and potentially other fibrotic muscle disorders,” the researchers said.

What happens to your shoulder when you use crutches?
Researchers call on province to fund genetic testing for cerebral palsy
Neurodevelopmental physical therapy improves spasticity in children with CP
‘This is not the end’ – Sledge hockey Paralympian shares hope, experience with injure...
Strenuous exercise is safe for people at high risk of knee OA
Virtual reality for wound care patients a Canadian first