Quantifying the effects of hypotonia starts in the clinic.

Effective management of children with hypotonia requires an understanding of how the condition affects gait. Clinicians typically rely on their professional experience when discussing the effects of hypotonia on gait in pediatric patients, partly because they trust that experience, but also because so little research has actually elucidated these effects. 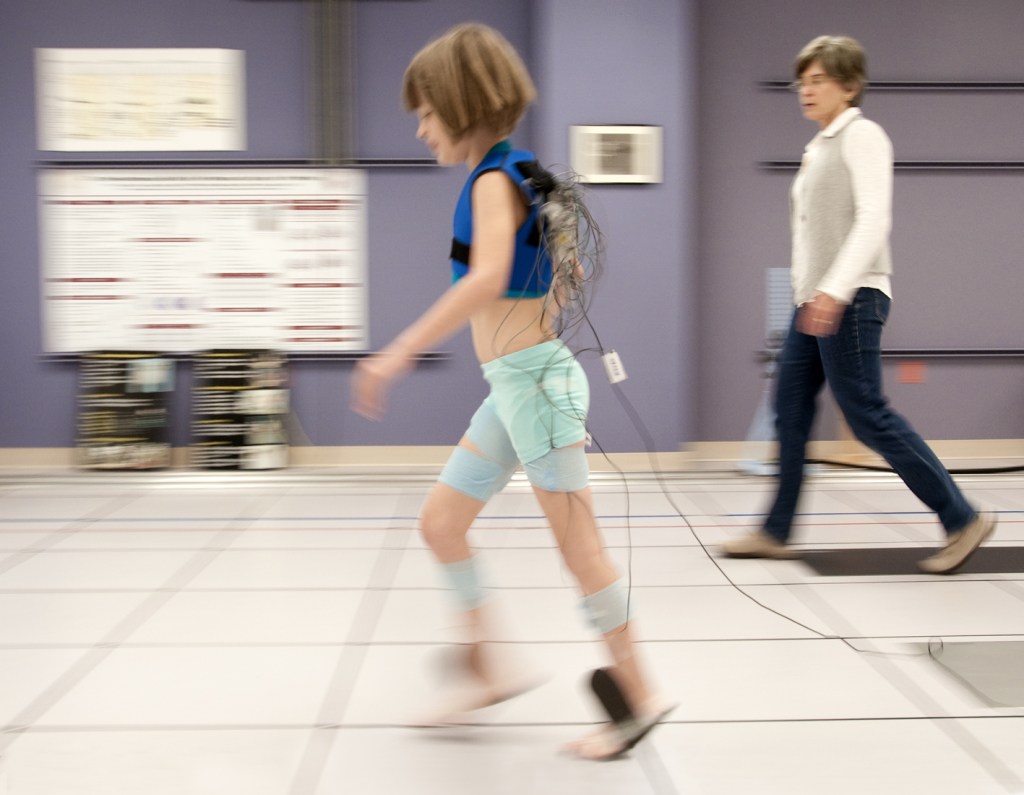 “This needs to be explored from a research standpoint because we really don’t know,” said Mark Holowka CPO, who practices at Children’s Healthcare of Atlanta. “It’s difficult to quantify hypotonia because muscle testing isn’t reliable in such young patients. As a result, we tend to rely on what we can observe and what we hear from the parents and the physical therapists on the team.”

Pending better funding for formal studies into hypotonia and associated hypermobility, many clinicians feel they should conduct informal research, as best they can.

“I think there has to be a real emphasis placed on gait analysis within clinical practice,” said Jason Henry MSPT LO, the practice manager at Hope Orthotics in Spring, TX. “We have to take the mindset that clinical practice is research. Many different aspects of gait can be analyzed even if you don’t have a gait lab, and that data has to be collected on a broader scale. We need more information about outcomes.”

According to Holowka, a grasp of the distinctions between pathologies associated with hypotonia is critical to clinical intervention, regardless of similarities in symptoms.

“For example, autism is more of a sensory issue, whereas in a Down syndrome patient, it’s important to focus on their joints and joint laxity,” he said. “You have to understand what is associated with each pathology, because these kids will have different developmental and physiologic concerns.”

Holowka added that performance inside the lab can differ significantly from that outside—a phenomenon he’s found more prevalent with autism patients than others. Parents are often the best source of insight about such disparities.

Kathy Martin PT DHS, a professor and director of the Doctor of Physical Therapy program at the University of Indianapolis, agreed that clinicians must rely on their own observations and measurements to characterize gait in children with hypotonia. And, despite the paucity of formal studies, most clinicians seem to agree about the outlines of those characteristics.

“My opinion is that hypotonia affects gait, in that I see kids with a wider base of support and more cocontractions, who are trying to artificially create stability,” she said. “These kids are using everything but the kitchen sink to keep themselves upright because they have to work so hard to control their body against gravity.”

Such patients may be less able to adapt to environmental obstacles than typically developing children, Martin explained, and have to change their ambulatory strategies when confronted with such obstacles.

“Children with Down syndrome may drop to their knees and crawl over an obstacle rather than stepping over it,” she said. “Down syndrome also includes issues related to balance and postural control, of course; it’s not just hypotonia. That raises the issue of what is the limiting factor, why they feel they can’t step over the object—but hypotonia contributes to that.”

In the scant literature that does address hypotonia in pediatric patients, a few key points are worth noting. First, though hypotonia is often thought of as muscle weakness, researchers point out that it is more accurately described as reduced resistance to passive range of motion in joints. Weakness, by contrast, is defined as a reduction in the maximum muscle power that can be generated.[1]

Many neurological conditions have been associated with hypotonia; the most commonly studied connection is with Down syndrome (DS), but others include Prader-Willi syndrome (PWS) and Ehlers-Danlos syndrome (EDS). Although hypotonia does occur in children who do not have a specific neurological diagnosis, the difficulty of categorizing such children means they are less likely to be included in scientific studies.

According to Faye McNerney PT DPT, a pediatric physical therapist in Troy, OH, DS has become the research standard because hypotonia is more consistent in that patient group.

“There is no gold standard for describing hypotonia, and because everyone with Down syndrome has some degree of hypotonicity, they are chosen as research subjects,” she said. “Children with low muscle tone typically have joint hypermobility, which results in various biomechanical effects. Hypermobility of the foot-ankle joint allows the feet to pronate, and with time you’ll see shortening of the peroneal muscle, lengthening of the posterior tibialis, medial rotation of the tibia, genu valgum, and hip internal rotation. As a result of these issues and poor balance, patients typically use a wide base of support during stance and ambulation.”

“When I talk about hypotonia, I think about Down syndrome patients, because those are the quintessential hypotonic patients,” he said. “They have a hard time with advanced ambulation skills—climbing stairs, negotiating ramps, and running.”

Indeed, because DS has been studied more than other syndromes, a review of the literature can shed at least some light on hypotonia and gait. For example, early research in DS patients reported that characteristic gait deviations included increased variability, out-toeing, flat foot at initial contact, a wider base of support, and poor foot control.[2]

In a 2012 study of foot-ground interaction during upright standing, some of the same researchers found that 99 children with DS (mean age 9.7 years) exhibited larger midfoot and reduced forefoot contact areas, increased arch index values, and increased average contact pressures in the midfoot and forefoot than controls.[4] Of course, standing measures don’t necessarily predict gait mechanics, but the authors noted that the prevalence of flatfoot in DS patients, associated with higher contact pressures, suggested the importance of clinical observation and intervention to reduce balance and gait impairment. Some gait impairments, however, would appear to be less affected by foot posture. For example, Brazilian researchers compared gait in toddlers with DS with controls and reported no differences in stiffness or lower limb cocontraction indices (CCIs) during stance; however, DS patients showed greater CCIs during swing phase.[5]

In 2011, Italian researchers also evaluated gait patterns in Ehlers-Danlos and Prader-Willi syndromes. Although this research was conducted in adults, the rare conditions have been so infrequently studied that results are worth noting here.

The two conditions were associated with different gait strategies. Patients with PWS showed some functional limitations at every level of the lower limb joints, whereas those with EDS had greater limitations that were nevertheless found mainly at the distal joints.

The authors recommended that PWS patients be encouraged to walk to improve muscle mass, strength, and energy balance, while rehabilitation for EDS patients should focus on improvement of ankle strategy.[6] Another Italian study comparing gait patterns in adult PWS and DS patients reported a cautious abnormal gait in both groups that was even less stable in DS patients. Those with DS also demonstrated significantly less hip flexion, knee flexion, and ROM in all joints compared to PWS patients. Both groups had significantly weaker push-off than controls.[7]

Finally, Canadian researchers reported in 2011 that children with autism had significant differences in cadence and peak hip and ankle kinematics and kinetics compared with controls. The children with autism also had reduced plantar flexor moments and increased dorsiflexion angles, which may have been associated with hypotonia.[8]

As noted, clinicians have long observed similar patterns in their patients with hypotonia.

“The disruption in neurology between the feet and the brain leads to an inefficient, dysfunctional gait,” said Jim Bauman, CO, who is in private practice at Edge Homecare Prosthetics and Orthotics in Edison, NJ. “For children with low tone, gait is more staggering and appears clumsy because of what they need to do to get their bodies to move through space.”

As noted, hypotonia is often associated with joint hypermobility, which presents its own challenges.

“Hypotonic patients end up with hypermobility, first and foremost in the foot-ankle complex,” said Curt Bertram. “These children overpronate right at initial contact, then once they get to midstance, the foot-ankle complex can’t stabilize, so their toe lever is shortened and they lose propulsion. With time and repetition in that position, they develop bony modeling that enhances the pronatory deformity.”

According to Jason Henry, ligamentous laxity and the associated lack of coordination lead to the kind of balance deficits for which DS patients try to compensate during gait with strategies such as wider stance.

“You see delays in milestones such as cruising,” Henry said. (Cruising in this case doesn’t refer to muscle cars or girls, but rather the strategy of holding onto furniture or other stabilizing objects while learning to walk.) “You’re going to see high guard, a lot of pronation, recurvatum, genu valgum, things like that. It goes all the way up, because hypotonia is global, so you see hyperlordosis, an anterior center of mass, and so forth.”

Researchers and clinicians acknowledge that they are somewhat baffled by the connection between hypotonia and hypermobility. Muscles contain motor neurons but ligaments don’t—they provide primarily proprioceptive feedback—so the physiological correlation between the conditions isn’t clear. Nevertheless, the connection is obvious in the clinic.

“Either problem can affect the development of motor skills, but it’s even worse if you put them together,” said Kathy Martin. “The ligaments are the primary stabilizers of your joints, and if they aren’t working well, your muscles are the second line of defense. Kids with low tone don’t have either, and I think that’s what leads to the delay in the acquisition of motor skills and the gait deviations we see.”

A few researchers have investigated hypermobility and gait. In a 2011 study, 29 pediatric patients with hypermobility syndrome had greater passive knee ROM but less peak knee flexion during walking than 37 healthy controls (mean age of participants was 11.5 years). Midstance knee extension during walking was increased in the hypermobile children, but gait speed was not significantly different between groups.[9]

Another study found decreased lateral trunk stability during walking in hypermobile children and adults.[10] Research into the hypermobile type of EDS (in this case, in adults), moreover, reported significantly impaired balance and gait; 95% of patients fell during the course of a year.[11] And British researchers have reported that, when joint hypermobility syndrome overlaps with genetic disorders such as EDS and Marfan syndrome, children report relatively high levels of neuromuscular and motor development problems.[12]

Further complicating the picture, however, is that hypermobility can exist by itself, absent the neurological conditions associated with hypotonia. In a study of 8-year-old schoolchildren with generalized joint hypermobility or benign joint hypermobility syndrome, but without other problems, Danish researchers reported that neither condition reduced motor competence or physical activity.[13] A study from the Netherlands reached a similar conclusion.[14]

Even though research into pediatric flexible flatfoot (PFF) is sometimes used as a proxy given the scarcity of data about hypotonia and hypermobility, the clinicians LER spoke with for this article generally downplayed the idea of a correlation. Depending on severity and factors such as patient and clinician preferences, most cases of PFF are treated with watchful waiting or simple orthotic strategies. And PFF is not, in any case, a neurological condition.

“The problem with Down syndrome children is that they have hypermobility associated with hypotonia, and they end up in a severely overpronated position,” explained Curt Bertram. “It’s a rotary deformity and very difficult to correct with mild treatment like a foot orthosis. Neither hypotonia nor the associated hypermobility is going to go away in kids with Down syndrome or Prader-Willi syndrome, whereas flexible flatfoot will typically resolve as the child develops and matures.”

Clinicians will continue to recognize and treat the manifestations of hypotonia and hypermobility regardless of etiology. That’s good news for patients and their parents.


The Development of Gait: Back to the Basics, Megan Smith CO, Director of Clinical Research, SureStep