Adolescent girls are more likely than boys to have idiopathic scoliosis, or curvature of the spine from no known cause. Rigid bracing is worn to restore spine alignment by external force. It is a demanding treatment at a vulnerable time of life. Catherine Saint Louis, The New York Times. Maddie Houser, 13, at home in Iowa City with the brace she wore for three years. Her mother, Becky, was opposed to surgery. Photo credit Daniel Acker for The New York Times

The Hospital for Sick Children September 19, 2013

A time-honoured treatment for spinal curvature, bracing of the spine, was the subject of an international trial to determine if it is more effective than “watching and waiting” in eliminating the need for surgical correction. The study, published today in The New England Journal of Medicine, brought scrutiny to the traditional treatment of bracing of the spine for at least 18 hours per day.

Bracing proved to be so effective in reducing the teens’ need for eventual surgery that the trial was halted mid-way through, says co-author Dr. James Wright, Surgeon-in-Chief at The Hospital for Sick Children (SickKids). “This definitive finding is good news for families seeking to halt the progress of scoliosis before surgery becomes necessary.”

This study presents important evidence addressing the fundamental question facing families and clinicians dealing with the diagnosis of AIS – to brace or not to brace. Now we can say with confidence that bracing prevents the need for surgery. Stuart Weinstein, of the University of Iowa and lead study author.

The research into adolescent idiopathic scoliosis (AIS) was an international multi-centre study led by collaborators from SickKids, the University of Iowa, Washington University School of Medicine and St. Louis Shriners Hospital for Children. The research involved 242 patients, of whom 146 received a brace and 96 underwent observation only.

The youngsters in the bracing group wore them for at least 18 hours a day, seven days a week, even while sleeping, often for many years until they finished growing. While the commitment of adolescents to wear the brace is enormous, the alternative of major spinal surgery is also daunting for teens and families.

“This study shows the power of clinical trials. The results will have a major impact on clinical practice. It’s never too late to shine the light of science on the practice of medicine,” Dr. Wright adds.

The success of bracing in preventing the need for surgery was 72 per cent, compared to the observation group at 48 per cent. “When we see a positive effect that is this powerful, medical ethics require that we stop the trial in order to advise all participants,” says Dr. Wright. At SickKids, Dr. Wright is also Chief of Perioperative Services, Orthopaedic Surgeon and Senior Scientist. He is also Professor of Surgery at the University of Toronto. 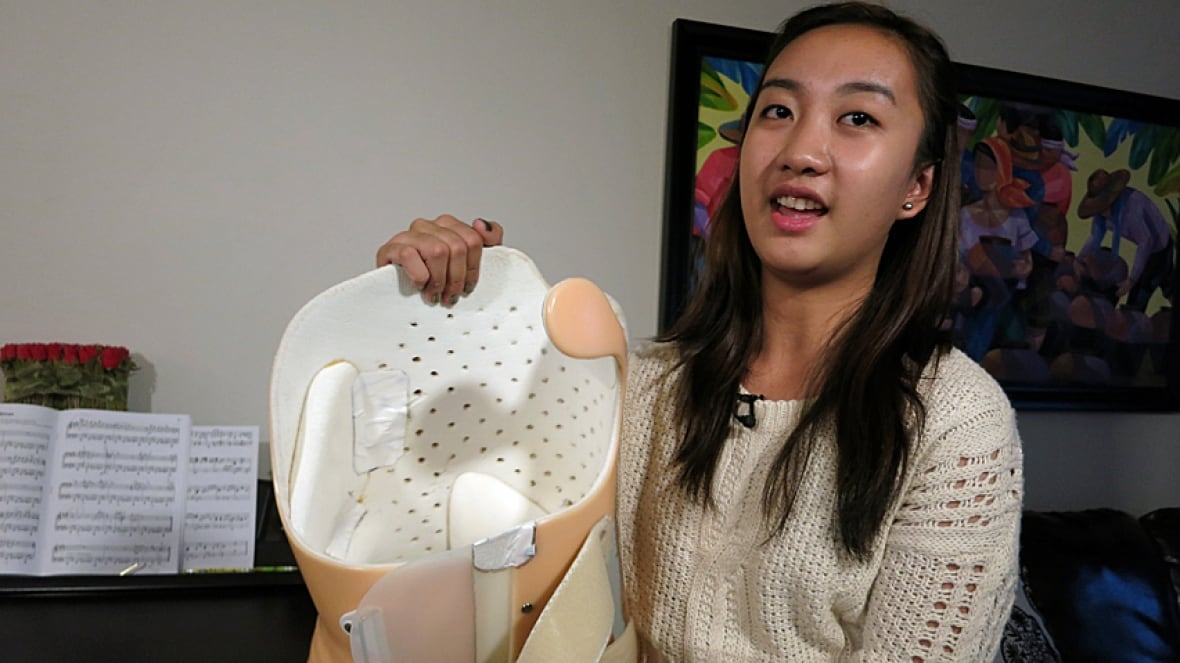 Mary-Louise Palogan wore a back brace for scoliosis, a condition she developed at the age of 12. CBC Health. David MacIntosh CBC

AIS is a spinal curvature that can progress through early adulthood so that surgical correction becomes necessary. It is typically diagnosed in children aged 10 to 15 years, affecting up to three per cent of children and teens in Canada.

“Currently 10 per cent of youngsters with AIS will require surgery in young adulthood. Our challenge as physicians is that we can’t predict which children will experience this progression,” says Dr. Wright. “Now we have definitive advice to offer those who want to ensure that they can stop progression before the spine reaches its adult size.”

Bracing has long been part of the treatment picture for AIS, but no previous study as demonstrated whether it is better than simple observation at preventing progression.

Wearing a rigid braces for 18 hours a day is not easy, but now we can advise patients and parents that wearing braces does work compared to a watch-and-wait approach,” he says. Further work is needed to fine-tune physicians’ ability to predict which children are not at risk of their curvature progressing, he adds.

Source The Hospital for Sick Children

Order the Braceworks Pectus Brace
Boy, 6, with scoliosis is first to get magnetic spine lengthening treatmen...
Girl, 3, is Orange family’s inspiration to change the world of pediatric w...
Students showcase their award winning accessibility related designs
Gene therapy shows early promise as Angelman syndrome treatment
In the debate over ‘SIDS monitors,’ evidence is thin all around