Flat head syndrome, or plagiocephaly as the condition is medically known, occurs when a flat spot develops on the back or side of a baby’s head. 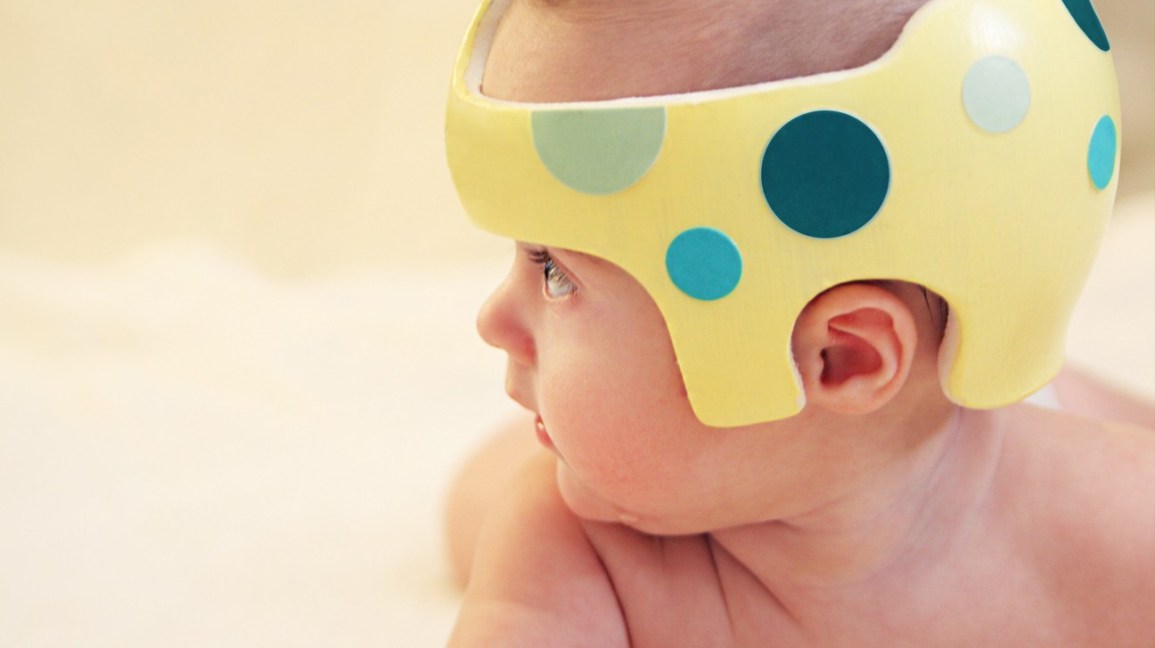 The condition can cause the baby’s head to look asymmetrical. Some describe the head as looking like a parallelogram when observed from above.

The soft bones also mean that a baby’s head can change shape. One common cause for flat head syndrome is regularly sleeping or lying in the same position.

Read on to learn more about this condition.

Congenital plagiocephaly, also known as craniosynostosis, is a rare birth defect. In babies with this condition, the fibrous spaces between the skull bones, known as sutures, prematurely close. This results in an abnormally shaped head.

Congenital plagiocephaly occurs in one out of every 2,000 to 2,500 births.

It may take several months for signs of flat head syndrome to appear. Check for signs of plagiocephaly during bath time when your baby’s hair is wet and their head shape is most visible.

Signs to look for include:

Congenital plagiocephaly is thought to occur by chance during fetal development. It can also run in families and is sometimes a part of inherited disorders.

According to a review published in the Indian Journal of Human Genetics, more than 180 syndromes, including Apert syndrome and Crouzon syndrome, can be associated with congenital plagiocephaly.

There are several possible causes for positional plagiocephaly:

Putting your baby to sleep in the same position day after day, for example, on their back or with their head facing right or left, puts consistent pressure on the same parts of the skull.

Babies are most at risk of positional plagiocephaly in the first four months of life, before they have the ability to roll over by themselves.

It’s recommended to always put your baby to sleep on their back to reduce risk of sudden infant death (SIDS).

To reduce risk of plagiocephaly, give your baby ample tummy time while they are awake. Spending time carrying your baby, either in your arms or a carrier, instead of having them lie down for extended periods of time. A bouncer or baby seat can also help to reduce their risk.

Plagiocephaly is more likely the more time your baby spends on their back. Adequate tummy time while you are awake and watching them can help reduce their risk of this condition.

Your baby may cry when you put them on their tummy, but it’s important to offer several tummy-time sessions a day.

When your baby is awake, place them on their tummy atop a blanket or mat. Start with a few minutes per session, and a few sessions a day. As your baby develops more muscle strength and neck control, you can increase the session duration.

Tummy time can also help your baby to build strength and muscles necessary for rolling over, crawling, sitting up, and, eventually, walking.

When womb space is tight, a baby’s skull has a greater than normal risk of being compressed. This can result in plagiocephaly.

Babies born prematurely have softer bones than those born at term. They are also more likely to have lengthy hospital stays where they spend much of their time lying on their backs.

These instruments put pressure on the skull and its malleable bones, which could lead to plagiocephaly.

This is a condition in which an infant’s neck muscles are stiff or imbalanced. It’s often caused by limited space in the uterus or being in a breech position.

Reduced space in the uterus or being in a breech position makes it harder for the baby to twist their neck and move their head. That can cause them to favor one side, which may lead to plagiocephaly or another skull deformity.

Positional plagiocephaly is considered more of a cosmetic issue than a medical one. In the majority of cases, it doesn’t affect brain development or growth. Most cases improve as the child gets older and spends more time sitting, crawling, and standing.

In a 2004 study where head circumference was regularly measured in 200 babies from birth to 2 years old, the incidence of positional plagiocephaly was:

A more recent study indicates an increased percentage: a little over 46 percent for babies who are 7 to 12 weeks old.

This increase may be due to the Back to Sleep campaign (currently known as the Safe to Sleep campaign), started in 1994, which advises placing babies on their back to sleep to reduce risk of SIDS.

Any lasting changes to the skull are generally mild and camouflaged by hair.

Surgery is usually necessary in a baby with congenital plagiocephaly when sutures in the skull have prematurely closed. Surgery can help relieve pressure in the skull and allow the brain to grow normally.

Surgery may also reduce the risk of complications like these:

The earlier plagiocephaly is recognized and steps are taken to reduce it, the better the chances are for the condition to be resolved.

Signs of plagiocephaly can become apparent to parents when their babies are about 6 to 8 weeks old, and many pediatricians examine a baby for skull deformities at every checkup during infancy.

Tell your child’s doctor right away if you notice any irregularities to your baby’s head, including:

Treatment will depend on the seriousness of your child’s condition and the suspected cause for plagiocephaly.

While it’s important to always put your baby to sleep on their back to reduce the risk of SIDS, be mindful of changing their position.

For example, if your baby favors sleeping with their left cheek flat against the crib mattress, position their head so that they sleep on their right cheek.

Molding helmet therapy involves having the baby wear a custom-molded helmet or band that will gently help reform the skull into a symmetrical shape.

According to the American Association of Neurological Surgeons, the optimum age of helmet therapy is 3 to 6 months. It can take about 12 weeks for the skull to be reshaped using this therapy.

Molding helmet therapy is usually reserved for those with more moderate to severe cases of plagiocephaly.

You’ll need a medical prescription to obtain a molding helmet, and your baby will need to wear the helmet all the time, except while they’re bathing.

The helmets can cause skin irritation and may make your baby fussy or upset. There’s also inconclusive evidence on the effectiveness of these devices.

Discuss the benefits and risks of this method with your doctor before moving forward with treatment.

You won’t be able to prevent all incidences of plagiocephaly, but there are some things you can do to reduce your child’s risk of some types of positional plagiocephaly:

Plagiocephaly is common in babies. While it can temporarily cause a misshapen head and possible misalignment of ears and eyes, the effects are generally mild and tend to resolve as a baby ages and becomes more mobile.

Positional plagiocephaly doesn’t affect brain development and, in many cases, it needs no medical intervention and resolves on its own.

How can I reduce the risk of SIDS? Eunice Kennedy Shriver National Institute of Child Health and Human Development NICHD