FES is used to achieve a direct orthotic effect during gait, for example, by triggering the dorsiflexors to lift the foot in swing or to trigger the quadriceps to extend knee in stance. Probably the most common application, at least in the adult stroke population, is FES applied to the dorsiflexors during the swing phase to prevent drop foot which could lead to tripping and falls.

A 2009 UK National Institute for Health and Clinical Excellence (NICE) guidance states that current evidence on safety and efficacy of FES for improving drop foot of central neurological origin is adequate to support the use of this procedure. However, the studies reviewed for this guidance were mainly on the adult stroke population.

Currently, ankle foot orthoses (AFOs) are most commonly prescribed for children with CP with insufficient dorsiflexion in the swing phase (drop foot), although as also discussed in the literature, children often dislike wearing them. In addition, AFO use is also often associated with weakness and atrophy of the lower limb muscles and this may lead to a poorly developed foot structure.

A recent review with regard to electrical stimulation for children with CP only found five small-scale studies with 12 participants or less. Only two studies used gait analysis to quantify the change in gait kinematics due to the application of FES. As a result, recent reviews called for appropriately powered studies with more rigorous research designs into the effects of FES in children with CP. 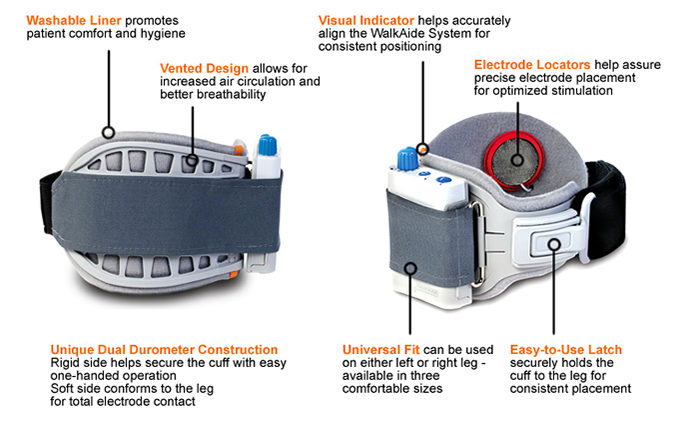 The research by Prosser et al., is therefore an important addition to the evidence for FES of the tibialis anterior muscle in children and adolescents with CP. Nineteen participants enrolled in this study, and a statistically significant improvement of dorsiflexion during swing was found with FES. In addition, the authors report clinically relevant information such as the average time the device was used and how many participants continued to use the device after 3 months (18/19).

Calgary Herald's 'Life with Emily' documentary a finalist for internationa...
For articular cartilage injury, a holistic approach is best
Home is where the heart is for Alana Ramsay
Philips launches clinically validated consumer health devices
‘The Good Doctor’ gets boost from real MD with disability
Why getting more people with disabilities developing technology is good fo...