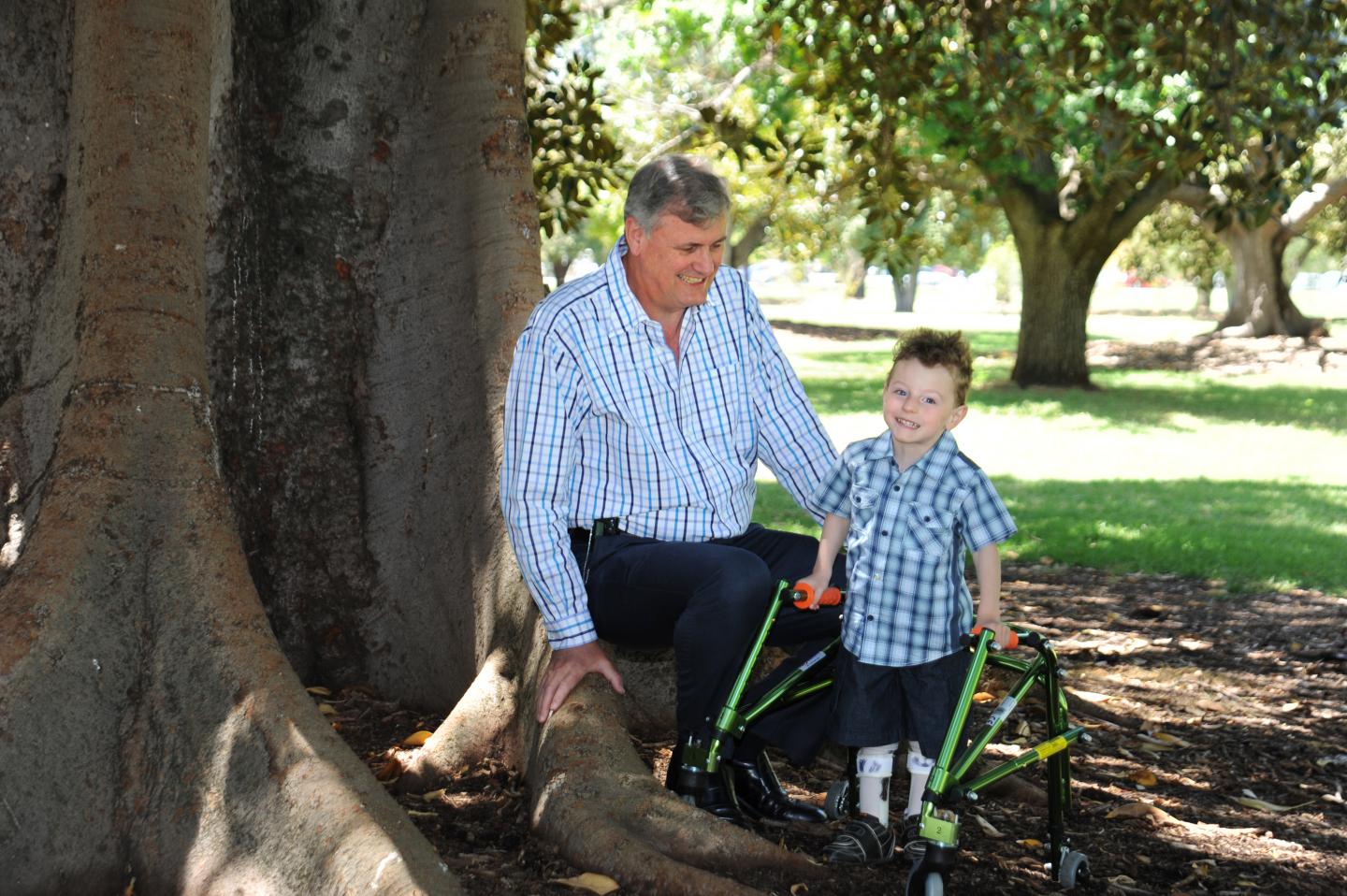 Co-author, Emeritus Professor Alastair MacLennan with Mathew Reinersten, from Adelaide, who is an ambassador for the group’s cerebral palsy research. University of Adelaide

In an article published in Nature Genetics, researchers confirm that about 14% of all cases of cerebral palsy, a disabling brain disorder for which there are no cures, may be linked to a patient’s genes and suggest that many of those genes control how brain circuits become wired during early development.

This conclusion is based on the largest genetic study of cerebral palsy ever conducted. The results led to recommended changes in the treatment of at least three patients, highlighting the importance of understanding the role genes play in the disorder. The work was largely funded by the National Institute of Neurological Disorders and Stroke (NINDS), part of the National Institutes of Health.

“Our results provide the strongest evidence to date that a significant portion of cerebral palsy cases can be linked to rare genetic mutations, and in doing so identified several key genetic pathways involved,” said Michael Kruer, MD, a neurogeneticist at Phoenix Children’s Hospital and the University of Arizona College of Medicine – Phoenix and a senior author of the article. “We hope this will give patients living with cerebral palsy and their loved ones a better understanding of the disorder and doctors a clearer roadmap for diagnosing and treating them.”

Cerebral palsy affects approximately one in 323 children in the United States. Signs of the disorder appear early in childhood resulting in a wide range of permanently disabling problems with movement and posture, including spasticity, muscle weakness, and abnormal gait. Nearly 40% of patients need some assistance with walking. In addition, many patients may also suffer epileptic seizures, blindness, hearing and speech problems, scoliosis, and intellectual disabilities.

Since its first official description in 1862, scientists have hotly debated whether cerebral palsy is caused by problems at birth. For instance, it is known that babies born prematurely or who experience a lack of blood flow or oxygen during birth have a greater chance of suffering from the disorder. Later though, researchers concluded that a majority (85-90%) of all cases are congenital, or born with the disease, and some studies had suggested that cerebral palsy could be inherited. Despite this, the causes of many children’s cases had remained elusive.

Then in 2004, scientists discovered the first genetic mutation known to cause cerebral palsy. Since then several more mutations have been identified and depending on how an experiment was performed, scientists have estimated that anywhere from 2 to 30% of all cases may be linked to a misspelling in a patient’s DNA. In this study, the researchers provided support for a previous estimate and highlighted which genes may play a critical role in the disorder.

“Cerebral palsy is one of neurology’s oldest unresolved mysteries. The results from this study show how advances in genomic research provide scientists with the hard evidence they need to unravel the causes behind this and other debilitating neurological disorders,” said Jim Koenig, PhD, program director at NINDS.

The study was led by Sheng Chih (Peter) Jin PhD, assistant professor of genetics at Washington University School of Medicine, St. Louis, and Sara A. Lewis PhD, a post-doc in the lab Dr. Kruer leads. 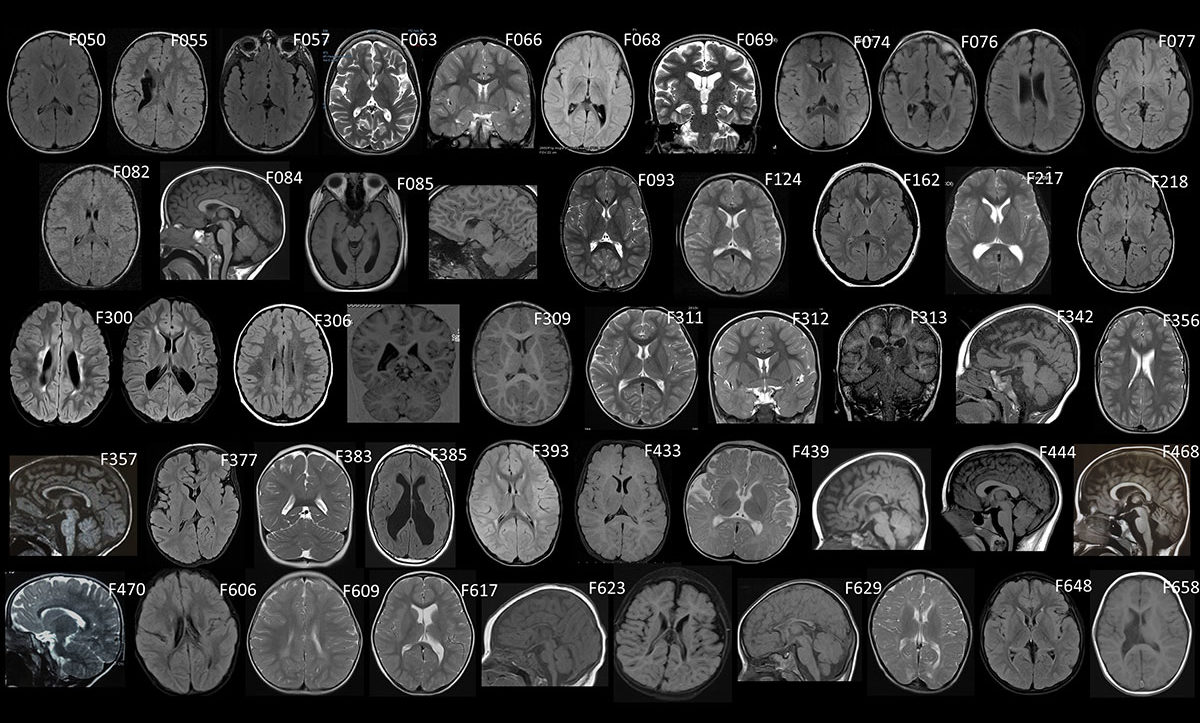 Cerebral palsy also has genetic underpinnings. Pictured is a set of MRI scans of brains of patients with the neurodevelopmental disorder cerebral palsy. For many patients with the disorder, doctors can’t pinpoint the cause. Researchers at Washington University School of Medicine in St. Louis and their colleagues at other institutions have identified mutations in single genes that can be responsible for at least some cases of cerebral palsy. Kruer Lab, Washington University School of Medicine.

The researchers searched for what are known as “de novo,” or spontaneous, mutations in the genes of 250 families from the United States, China, and Australia through a collaboration made possible by the International Cerebral Palsy Genomics Consortium. These rare mutations are thought to happen when cells accidentally make mistakes copying their DNA as they multiply and divide. An advanced technique, called whole exome sequencing, was used to read out and compare the exact codes of each gene inscribed in the chromosomes of the patients with that of their parents. Any new differences represented de novo mutations that either happened while a parent’s sperm or egg cell multiplied or after conception.

Initially the researchers found that the cerebral palsy patients had higher levels of potentially harmful de novo mutations than their parents. Many of these mutations appeared to be concentrated in genes that are highly sensitive to the slightest changes in the DNA letter code. In fact, they estimated that about 11.9% of the cases could be explained by damaging de novo mutations. This was especially true for the idiopathic cases which had no known cause and represented the majority (62.8%) of cases in the study.

Approximately another 2% of the cases appeared to be linked to recessive, or weaker, versions of genes. This raised the estimate of cases that could be linked to genetic problems from 11.9% to 14%, as has been previously reported.

Moreover, the results led to recommendations for more tailored treatments of three patients.

“The hope of human genome research is that it will help doctors find the best, most personalized, matches between treatments and diseases. These results suggest that this may be possible for some patients with cerebral palsy,” said Chris Wellington, program director in the Division of Genome Sciences at the NIH’s National Institute of Human Genome Research, which also provided support for the study.

When the researchers looked more closely at the results, they found that eight genes had two or more damaging de novo mutations. Four of these genes, labeled RHOB, FBXO31, DHX32, and ALK, were newly implicated in CP while the other four had been identified in previous studies.

The researchers were especially surprised by the RHOB and FBXO31 results. Two cases in the study had the same spontaneous mutation in RHOB. Likewise, two other cases had the same de novo mutation in FBXO31.

“The odds of this randomly happening are incredibly low. This suggests that these genes are highly linked to cerebral palsy,” said Dr. Jin.

The researchers also looked at the genes behind other brain development disorders and found that about 28% of the cerebral palsy genes identified in this study have been linked to intellectual disability, 11% to epilepsy and 6.3% to autism spectrum disorders. In contrast, the researchers found no significant overlap between cerebral palsy genes and those involved with the neurodegenerative disorder Alzheimer’s disease which attacks the brain later in life.

“Our results support the idea that cerebral palsy is not one narrow disease but a spectrum of overlapping neurodevelopmental problems,” said Dr. Lewis.

Further analysis of the results suggested that many of the genes they found in this study, including six of the eight genes that had two or more de novo mutations, control the wiring of neural circuits during early development. Specifically, these genes are known to be involved in either the construction of protein scaffolds that line the perimeters of neural circuits or in the growth and extension of neurons as they wire up.

Experiments on fruit flies, formally known as Drosophila melanogaster, supported this idea. To do this, the researchers mutated fly versions of the wiring genes they identified in the cerebral palsy patients. They found that mutations in 71% of these genes caused flies to have problems with movement, including walking, turning, and balancing. The results suggested that these genes play a critical role in movement. They estimated that there was only a 3% chance these problems would happen if they had blindly mutated any gene in the fly genome.

“Treatments for cerebral palsy patients have not changed for decades,” said Dr. Kruer. “In the future, we plan to explore how these results can be used to change that.”

Exercise: Not a miracle cure, just good medicine
Christmas BA magic for Finlay!
Publicly funding drugs for all Canadians could save over $4 billion a year
Brennan Ryan: With AFOs and cool sneakers, this 10-year-old can be a regul...
Calgary girl with Down syndrome stuck at home due to lack of school suppor...
David, now 17, had to wait almost four months for an ankle foot orthosis