The first demonstration of a fully print-in-place electronics technique is gentle enough to work on surfaces as delicate as human skin and paper. 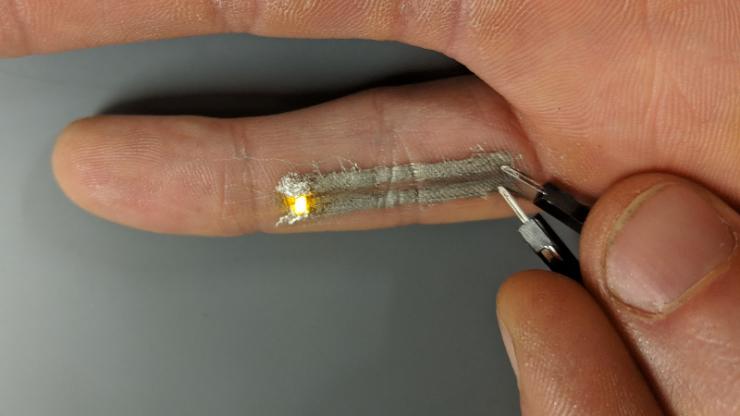 Electrical engineers at Duke University have devised a fully print-in-place technique for electronics that is gentle enough to work on delicate surfaces including paper and human skin. The advance could enable technologies such as high-adhesion, embedded electronic tattoos and bandages tricked out with patient-specific biosensors.

“When people hear the term ‘printed electronics,’ the expectation is that a person loads a substrate and the designs for an electronic circuit into a printer and, some reasonable time later, removes a fully functional electronic circuit,” said Aaron Franklin, the James L. and Elizabeth M. Vincent Associate Professor of Electrical and Computer Engineering at Duke.

“Over the years there have been a slew of research papers promising these kinds of ‘fully printed electronics,’ but the reality is that the process actually involves taking the sample out multiple times to bake it, wash it or spin-coat materials onto it,” Franklin said. “Ours is the first where the reality matches the public perception.”

The concept of so-called electronic tattoos were first developed in the late 2000s at the University of Illinois by John A. Rogers, who is now the Louis Simpson and Kimberly Querrey Professor of Materials Science and Engineering at Northwestern University. Rather than a true tattoo that is injected permanently into the skin, Rogers’s electronic tattoos are thin, flexible patches of rubber that contain equally flexible electrical components.

“Some of the more exotic applications include intimately connected electronic tattoos that could be used for biological tagging or unique detection mechanisms, rapid prototyping for on-the-fly custom electronics, and paper-based diagnostics that could be integrated readily into customized bandages.”

The thin film sticks to skin much like a temporary tattoo, and early versions of the flexible electronics were made to contain heart and brain activity monitors and muscle stimulators. While these types of devices are on their way to commercialization and large-scale manufacturing, there are some arenas in which they’re not well suited, such as when direct modification of a surface by adding custom electronics is needed.

“For direct or additive printing to ever really be useful, you’re going to need to be able to print the entirety of whatever you’re printing in one step,” said Franklin. “Some of the more exotic applications include intimately connected electronic tattoos that could be used for biological tagging or unique detection mechanisms, rapid prototyping for on-the-fly custom electronics, and paper-based diagnostics that could be integrated readily into customized bandages.”

In the July paper, Franklin’s lab and the laboratory of Benjamin Wiley, professor of chemistry at Duke, developed a novel ink containing silver nanowires that can be printed onto any substrate at low temperatures with an aerosol printer. It yields a thin film that maintains its conductivity without any further processing. After being printed, the ink is dry in less than two minutes and retains its high electrical performance even after enduring a 50 percent bending strain more than a thousand times.

In a video accompanying the first paper, graduate student Nick Williams prints two electronically active leads along the underside of his pinky finger. Toward the end of his finger, he connects the leads to a small LED light. He then applies a voltage to the bottom of the two printed leads, causing the LED to stay lit even as he bends and moves the finger.

In the second paper, Franklin and graduate student Shiheng Lu take the conductive ink a step further and combine it with two other printable components to create functional transistors. The printer first puts down a semiconducting strip of carbon nanotubes. Once it dries, and without removing the plastic or paper substrate from the printer, two silver nanowire leads that extend several centimeters from either side are printed. A non-conducting dielectric layer of a two-dimensional material, hexagonal boron nitride, is then printed on top of the original semiconductor strip, followed by a final silver nanowire gate electrode.

With today’s technologies, at least one of these steps would require the substrate to be removed for additional processing, such as a chemical bath to rinse away unwanted material, a hardening process to ensure layers don’t mix, or an extended bake to remove traces of organic material that can interfere with electric fields.

But Franklin’s print-in-place requires none of these steps and, despite the need for each layer to dry completely to avoid mixing materials, can be completed at the lowest overall processing temperature reported to date. 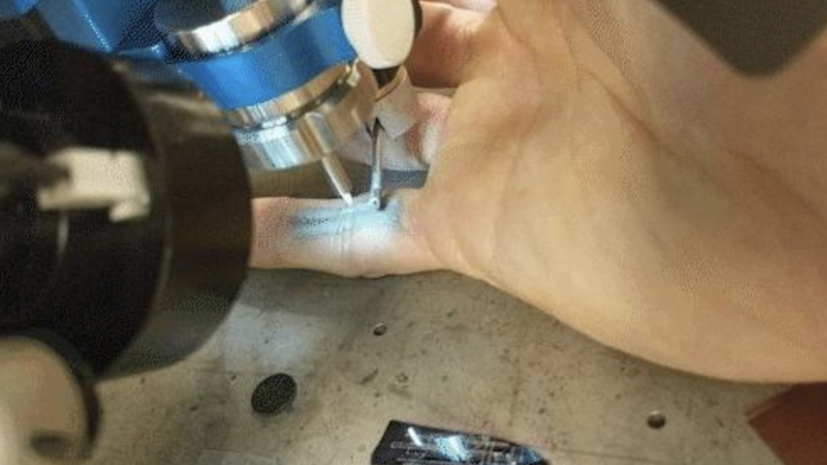 Duke graduate student Nick Williams prints two electronically active leads along the underside of his pinky finger, places small LED light between them, and applies a voltage to show the circuit stays intact even when he bends his finger. Nick Williams, Duke University

“Nobody thought the aerosolized ink, especially for boron nitride, would deliver the properties needed to make functional electronics without being baked for at least an hour and a half,” said Franklin. “But not only did we get it to work, we showed that baking it for two hours after printing doesn’t improve its performance. It was as good as it could get just using our fully print-in-place process.”

Franklin doesn’t see his printing method replacing large-scale manufacturing processes for wearable electronics. But he does see a potential value for applications such as rapid prototyping or situations where one size doesn’t fit all.

“Think about creating bespoke bandages that contain electronics like biosensors, where a nurse could just walk over to a work station and punch in what features were needed for a specific patient,” said Franklin. “This is the type of print-on-demand capability that could help drive that.”