Luke Anderson has thought a lot about designing accessible spaces. And he’s come to an important conclusion. 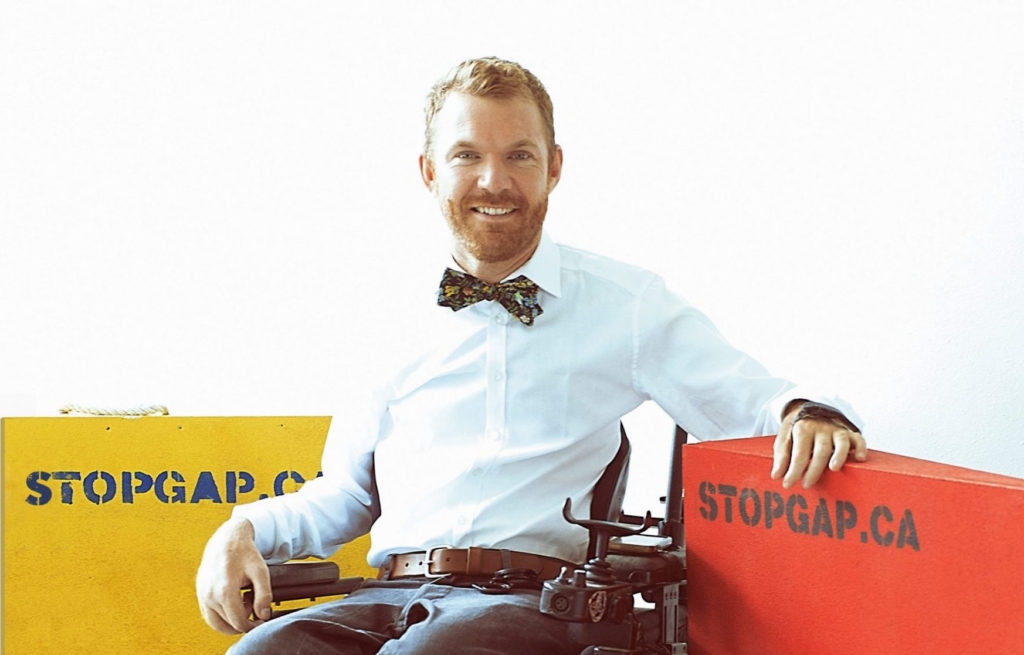 “It’s not us that have disabilities, but it’s the places we live, work and play that are disabled,” Anderson told Tapestry guest host Christa Couture.

In his early twenties, Anderson injured his spine in a mountain biking accident. Suddenly, he faced new barriers between him and his favourite places.

“My favourite ice cream shop has a step. I’m fully able to buy an ice cream, but I can’t because of that step,” said Anderson.

Experiences like this led Anderson to create StopGap — a project that aims to eliminate access limitations for people with disabilities by installing removable, brightly coloured ramps at businesses with steps.

“I always point out curb cuts at intersections,” said Anderson.

Curb cuts are the small dips at intersections that allow for a smooth transition between the sidewalk and the road.

“For someone in my situation who uses a wheelchair, or a delivery person, or a parent pushing a stroller, they’d be really challenged to get around many cities without those curb cuts,” said Anderson.

Anderson believes demand for accessible design will increase because, in his view, all people are “T.A.B.s.”

T.A.B. is an acronym that stands for “Temporarily Able-Bodied.”

“Inevitably we will encounter a change in our ability to move around, whether we become a parent, sprain our ankle, or just age,” said Anderson. “So it’s in our best interests to make sure that our communities are set up to help someone move around independently.”

For Anderson, accessible design is ultimately about empowering individuals but he says we can also empower people with language.

Anderson uses person-first language, which emphasizes the person before their disability.

While person-first language is the preferred style for most publications, there is debate about it within disability communities.

“For me it feels so integrated into who I am. I’m Indigenous, I’m queer, I’m a quarter Norwegian and I’m disabled, and that’s not a negative thing,” said Couture.

We have adopted the dynamic #accessibility symbol!
What is it? The new design shows a person in a wheel chair leaning forward, with arms raised in the air as to power their chair forward. pic.twitter.com/MbJpStGzsB

While she and Anderson differ in how they identify, both agree asking for and respecting people’s preference is the most important thing.

“As long as we’re moving away from language like handicapped or cripple — ‘handicapped parking’ becomes ‘accessible parking’. That just feels better, there’s a totally different tone there. And then we can start to play within our own desires of how we would like to be referred to.”

Also see
StopGap’s Luke Anderson on the barriers within us Broadview
My cerebral palsy isn’t a problem to be cured, says writer Eli Clare Tapestry CBC Radio
Rethinking disability Tapestry CBC Radio
U of G Expert to Discuss Women With Disabilities With CBC Univeristy of Guelph

Syrian woman with cerebral palsy gives back to Calgary community that supp...
Parents say they can't afford their disabled children under N.L. health sy...
A majority of nurses believe that connected medical devices can reduce med...
CPAA online programs in December 2020 – Register NOW
When to be concerned with your child’s development
Gear hacks: setting up a DIY workspace