Construction already underway on some sites which will give children of varying abilities space to play. 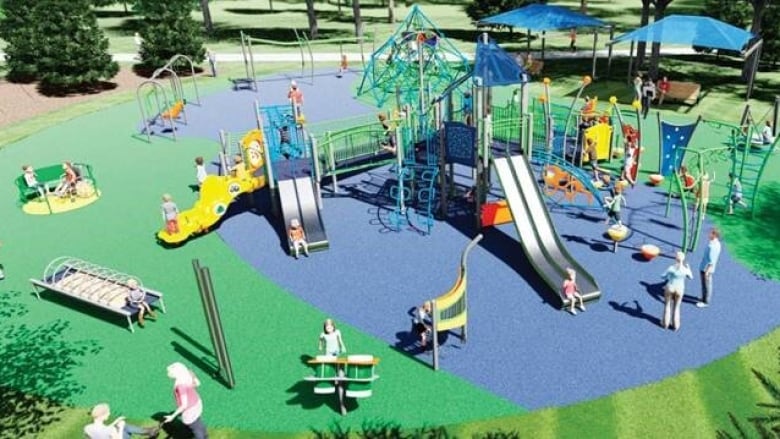 A rendering of the inclusive playground to be built in Elliston Park in southeast Calgary. City of Calgary

The city is rolling out ten new inclusive playgrounds in different parts of Calgary this year.

Inclusive playgrounds provide the opportunity for children of all abilities to play safely.

Typically, she said there’s accessible parking or transit close by, a pathway will allow all kids to easily get to the play structures and parents will appreciate that there’s a washroom or a water supply close at hand.

“Play is part of a child’s social and physical and cognitive development and playgrounds offer that opportunity for play to happen. An inclusive playground offers the same play benefits to kids of any ability,” said Macdonald.

The city is partnering with the Calgary Parks Foundation on funding the ten sites. Macdonald said they’ll cost $4.2 million.

Besides being wheelchair accessible, Macdonald said the playgrounds are accessible in other ways.

For kids who are blind or have vision impairment, the paths through the playgrounds might be different colours and handrails might be differently coloured than stairs. At some locations, braille signs will indicate the structure’s name.

She said there will also be cozy places to sit or semi-private areas where children with sensory issues can take a break from the action.

Each of the ten new playgrounds will have unique features.

For example, the playground being built at Edworthy Park will have features that tie into the park’s history.

“There’s some reference to the history there with the sandstone quarry and the market garden. So we asked to have a theme that might reflect that,” said Macdonald.

“There you’ll see kind of a farmer theme, some climbing stones, things like that.”

There are some inclusive playgrounds in the city but the city wants to expand the list of places that are welcoming to all kids.

In 2017, Farrell convinced her council colleagues to support a motion calling for city play spaces to be more inclusive.

“The city can show leadership by just making sure that all of our playgrounds are welcoming to kids of all sizes and abilities,” said Farrell.

“I’ve heard too many sad stories of children who are forced to the sidelines because of their abilities, different abilities.”

Some of the sites are already under construction and all ten playgrounds are expected to be open later this year.