Engineering couldn’t cure a devastating illness, but it could still help someone cope with it.

We were spending a week on California’s Pacific Crest Trail, traversing a part of the Sierras north and west of Lake Tahoe. The terrain was rugged, the weather was hot and dry, and both the fitness level and experience of the 20 people involved varied greatly. Greg was our leader. 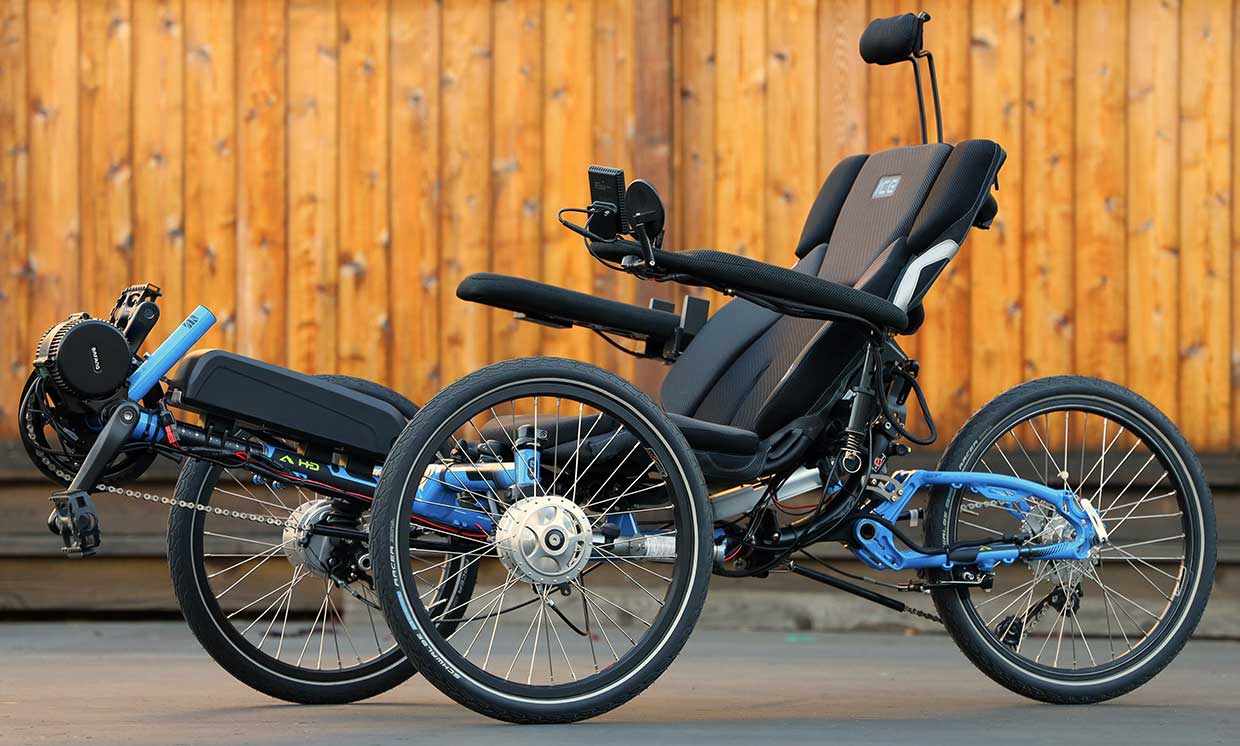 Greg stood at the base of the tall granite crag, his climbing harness arrayed with carabiners, anchors, and rope, his ever-present Tilly hat crumpled under an orange climbing helmet. As usual, he had a flock of novice climbers in attendance, all nervous about what the day would hold. It was July of 2017, and I was one of them. The most reassuring item by far was not any of the safety gear, but the impish grin on Greg’s face, which conveyed a reassuring message: It’s okay; this will be fun; I’ve got you.

We were spending a week on California’s Pacific Crest Trail, traversing a part of the Sierras north and west of Lake Tahoe. The terrain was rugged, the weather was hot and dry, and both the fitness level and experience of the 20 people involved varied greatly. Greg was our leader.

Some context is probably useful. Every year, the American Leadership Forum curates a class of 20 to 25 people. The goal is to have people with a mélange of skills, backgrounds, and perspectives study and interact in hopes that in the end the group will be more enlightened, aware, and cohesive—and thus more capable of effecting positive change in the community.

Greg was not only our guide up the mountain, he was also the leader of our broader journey. Together we learned about mindfulness, aikido, compassion, drumming, the structure of cities, culture in America, and the obligation of the individual in a collective. He rang the gong, gently nudged the conversation, and slowly but surely became a trusted and dear friend.

One night I was helping with dinner preparation after a long day on the trail. Greg sat down next to me and began massaging his right arm. He was one of the most vigorous people I knew—whether biking, hiking, or climbing—so I assumed he just had a bit of muscle soreness. I asked him about it, and he said that it had been bothering him for a few weeks. Greg went on to say that he had a surgical procedure scheduled to address the underlying pinched nerve when he returned home to Oregon.

I didn’t see Greg for a couple of months, until well after his surgery. When we reconnected in class, I was surprised to see him squeezing an exercise ball and reporting that his arm wasn’t feeling better. If anything, the pain and weakness were getting progressively worse. More ominously, he said, the doctors wanted to run some additional tests.

A week later we all heard the devastating news: Greg had ALS, and it was the faster moving of the two varieties.

Amyotrophic lateral sclerosis is a disease that affects nerve cells in the brain and spinal cord, causing progressive loss of muscle control. In North America, it’s often called Lou Gehrig’s disease, after the baseball player of the 1920s and ’30s who was famously diagnosed with it in the prime of his career. Medical professionals usually don’t know why ALS strikes, although some cases are inherited. It often begins with muscle twitching and weakness in a limb, or slurred speech. Eventually it affects the muscles needed to move, speak, eat, and breathe. There is no cure: It is invariably fatal.

This diagnosis, obviously, was an enormous gut-wrenching shock, and the exigencies of Greg’s life were instantly and inexorably altered. He would need increasing amounts of care, his livelihood was in doubt, and his family had to prepare for his inevitable downward trajectory.

Greg’s disease progressed quickly. The next time I saw him he couldn’t lift either arm and needed assistance balancing. His daughter moved home to accompany him on select work assignments, but it was clear that his life as an independent person was drawing to a close.

Being an engineer, a tech entrepreneur, and most recently a venture capitalist, I was maddeningly unqualified to assist with anything medical. But I felt compelled nonetheless to try and improve Greg’s quality of life. My initial idea was vague: to help Greg regain a bit of independence and get him back into the outdoors, where in the past he had so thrived.

After I ruminated for a few days, a solution began to emerge. I would build Greg a recumbent tricycle that could accommodate his declining abilities. It would be a trike rather than a bike, so balance wouldn’t be needed. It would be electrified to augment his weakened but still functioning leg muscles. And (here’s where my special contribution came it), it would have joystick controls, because his only remaining granular dexterity was in two fingers on his left hand. A higher-order goal was to create an integrated solution that was simple to operate and maintain, so that he’d be able to use it as much as possible.

After researching the various recumbent trikes available, I settled on a frame from Inspired Cycle Engineering (ICE) in the UK. I chose the company’s “Adventure” model which has underslung steering linkages, and a fairly traditional drum brake setup. I ordered one, which showed up at my doorstep three weeks later.

At this early point of the design phase, I enlisted some help from Greg, who was very clear about the extent and nature of his disability. The right side of his body was almost completely impaired, but the large muscle groups in the shoulders still functioned and would remain working for the longest time in the future. We settled on the idea that gear selection would somehow be controlled by a shift of his shoulder. Steering and braking would be handled by two fingers on his left hand. 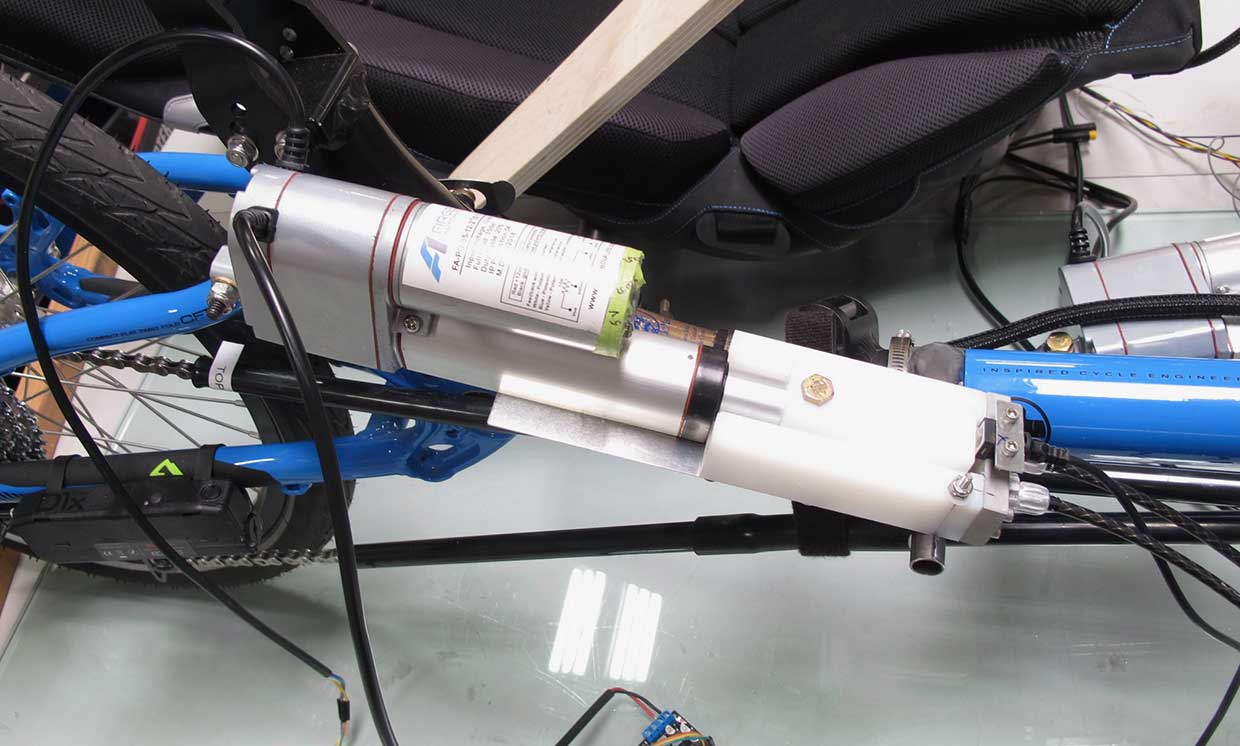 This linear actuator is used to operate the drum brakes attached to the front wheels. It does that in the usual fashion: by tugging on brake cables. Adam Grosser photo

My original idea for shifting was to adapt an electronic derailleur from Shimano—the company’s Di2 system. But I discovered that it was totally proprietary, which would have made it difficult to reverse engineer. Fortunately, I found a company in California named Archer Components that sells a system to automate a manual derailleur. It comes complete with open APIs and Bluetooth, so it was easy to interface wirelessly with paddles on the left arm rest that Greg could operate by moving his shoulder. 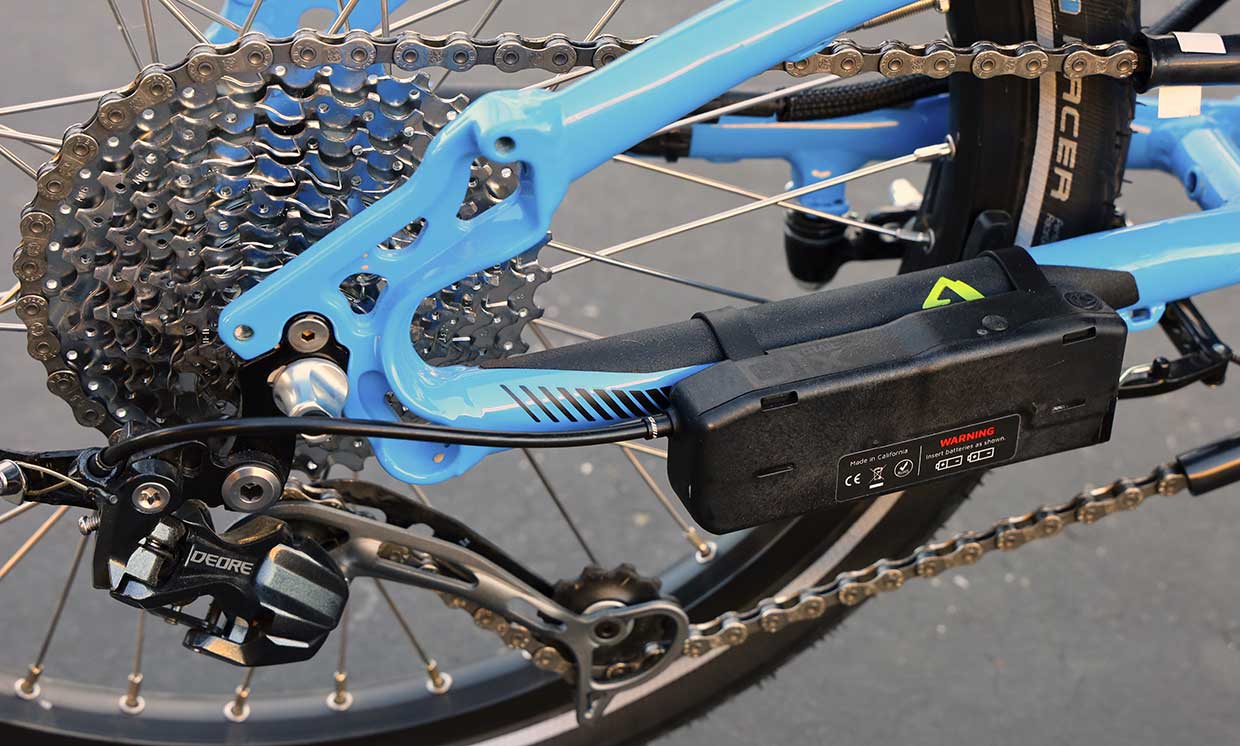 This device, from Archer Components, converts a normal rear derailleur into an electronically operated one. Adam Grosser photo

I next turned to consider steering and braking. Fortunately, the force profiles and absolute travel required for both are well within the range of off-the-shelf linear actuators, which I purchased from Firgelli Automations. Still, I had a bunch of decisions to make: Should the control of steering and braking be open or closed loop; should the brake on each front wheel be operated by its own actuator, or should a single one control both. And what would be the best way to translate the motion of the joystick into braking and steering action so as to give Greg a safe and fully useful trike.

After numerous design iterations and test rides around the parking lot, I settled on open-loop controls with one actuator operating both front brakes following a fairly linear displacement curve. That is, the amount each brake cable is pulled is roughly proportional to amount Greg displaces the joystick. For steering, though, I programmed in an exponential response curve, meaning that small deflections of the joystick to the left and right would give Greg fine-grained steering control, but he’d still be able to generate plenty of throw when he moved the joystick farther to the side. This arrangement seemed to best match the dexterity of his left hand. And in any case, these curves could be quickly adjusted with a software update.

For the electric-assist, I used Bafang’s mid-drive system. (It’s called “mid drive” because in a normal bike, the motor is mounted in the middle where it turns the chain, rather than powering the front or back wheel directly.) This choice came with several advantages. First, it allowed Greg to select a level of pedal assistance from almost nothing, to fully electric. Second, it has a relatively large battery pack, which could be used to power the entire system and still provide a 50-mile cruising range. Powering steering and braking off the same battery, though, could have created a special kind of range anxiety. So I engineered a battery-management system that cut power to the drive motor when the battery was depleted, ensuring there’d always be enough power for steering and braking. 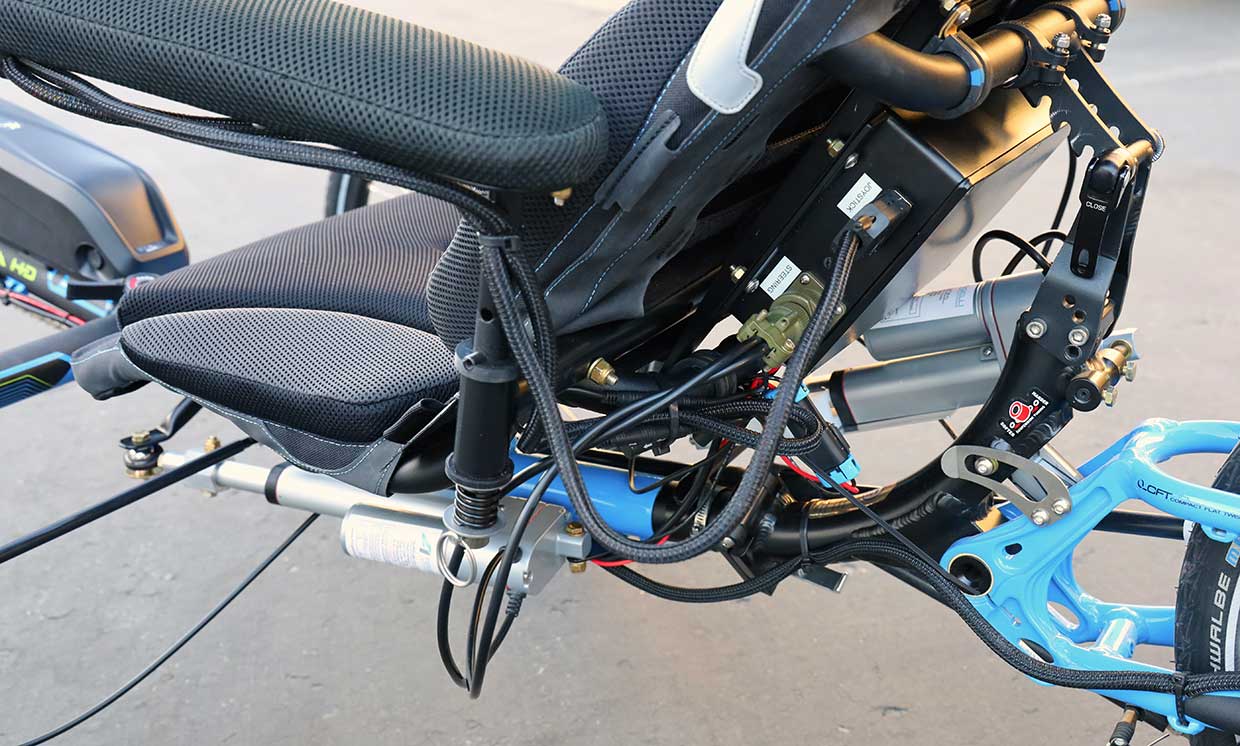 Beneath the seat is a second linear actuator, for steering. Behind the seat is an enclosure for the control electronics. Adam Grosser photo

Integrating these various components was straightforward. I flashed the software onto the boards, packaged the electronics in a water-resistant case, wired things up, and fabricated a custom seat, armrest, and left-hand controller. The only thing left was to ship it to Greg in Oregon and hope for the best. 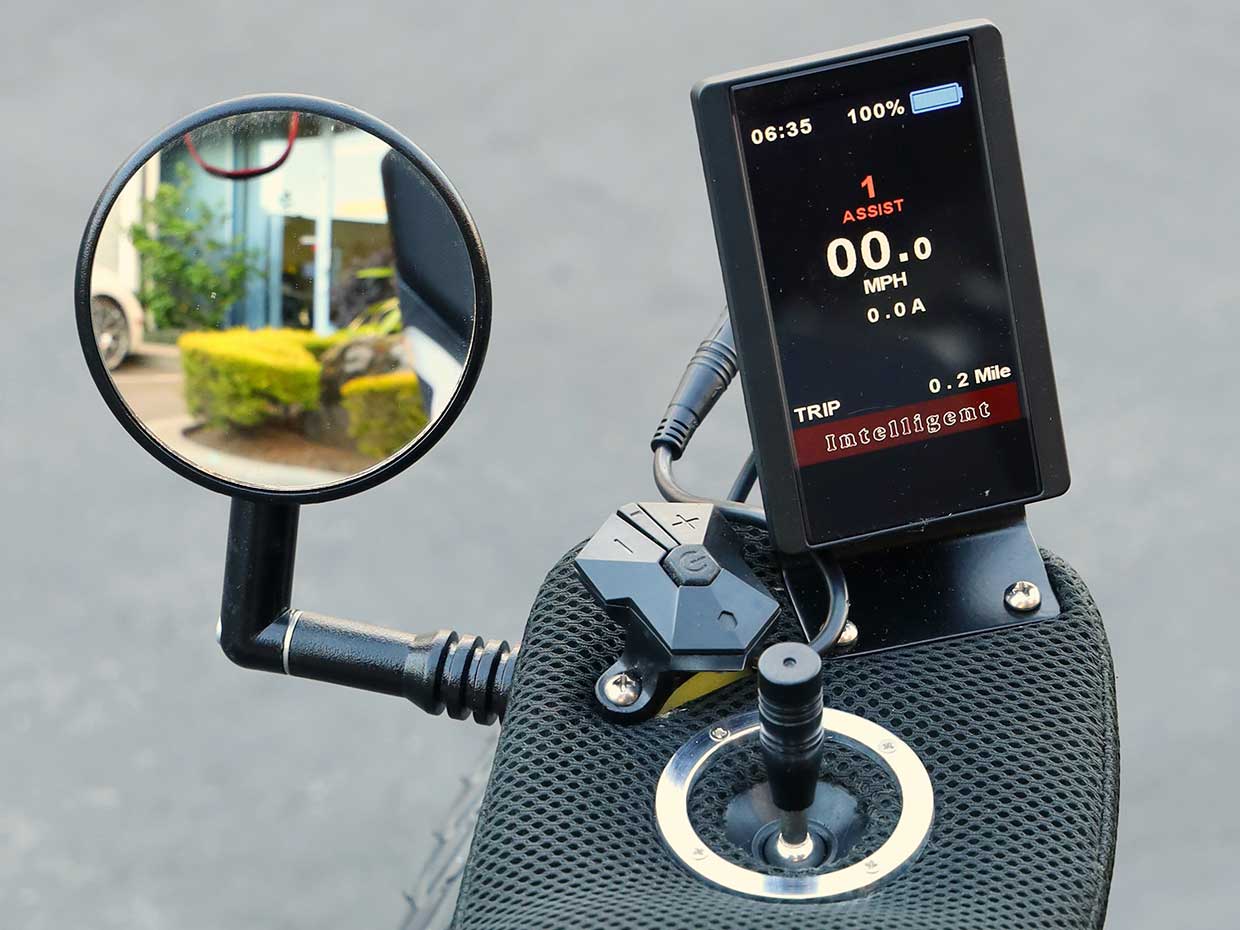 The controls are located on the left arm rest. These include a joystick for steering and braking, and a paddle for shifting gears. Adam Grosser photo

Three days later, I received a message from Greg saying that he had received the big box and was getting some help assembling the trike, which I had to dismantle in part for shipping. A few days after that, he reported the results of his first ride: “OMG! I am still basking in the glow of that first test drive! You guys don’t know how grateful I am. The freedom, ability to move, adventure I am imagining on the bike fills me with so much joy. Thank you. Thank you. Thank you.”

Greg’s ALS has continued to progress. His speech is now slurred, and walking is becoming a challenge. But he is still able to take his trike out on nearby trails for an hour a day, thanks to its various cycle-by-wire modifications.

This project is the perfect example of why I’m proud to be an engineer. To identify a problem, conceptualize a solution, build it, refine it through testing, and deliver something of value to the end user is a reward unto itself. In this particular case, I was also able to do a much-appreciated favor for a friend in need. While I wish I could have somehow helped Greg medically, that was beyond my skill set. Getting him back cycling, though, was right up my alley.

I should mention that after Greg posted some images of the finished trike on social media I was immediately deluged with expressions of interest from other people with ALS and also from some manufacturers of recumbent tricycles. While I have no desire to produce such trikes commercially, I have offered my CAD files, source code, and thoughts to anyone who has approached me in hopes that other people with disabilities may benefit from this project. I know it would please Greg no end if it did.

Finding one’s way home
Staff restrictions, lack of PPE endangering Albertans with disabilities
Canmore figure skater with Down syndrome finds expression, recognition on ...
Orthosis use in children with Down syndrome
CERB helped Canadians during COVID-19 — but not the most vulnerable
FREE! Adaptive Sports Program