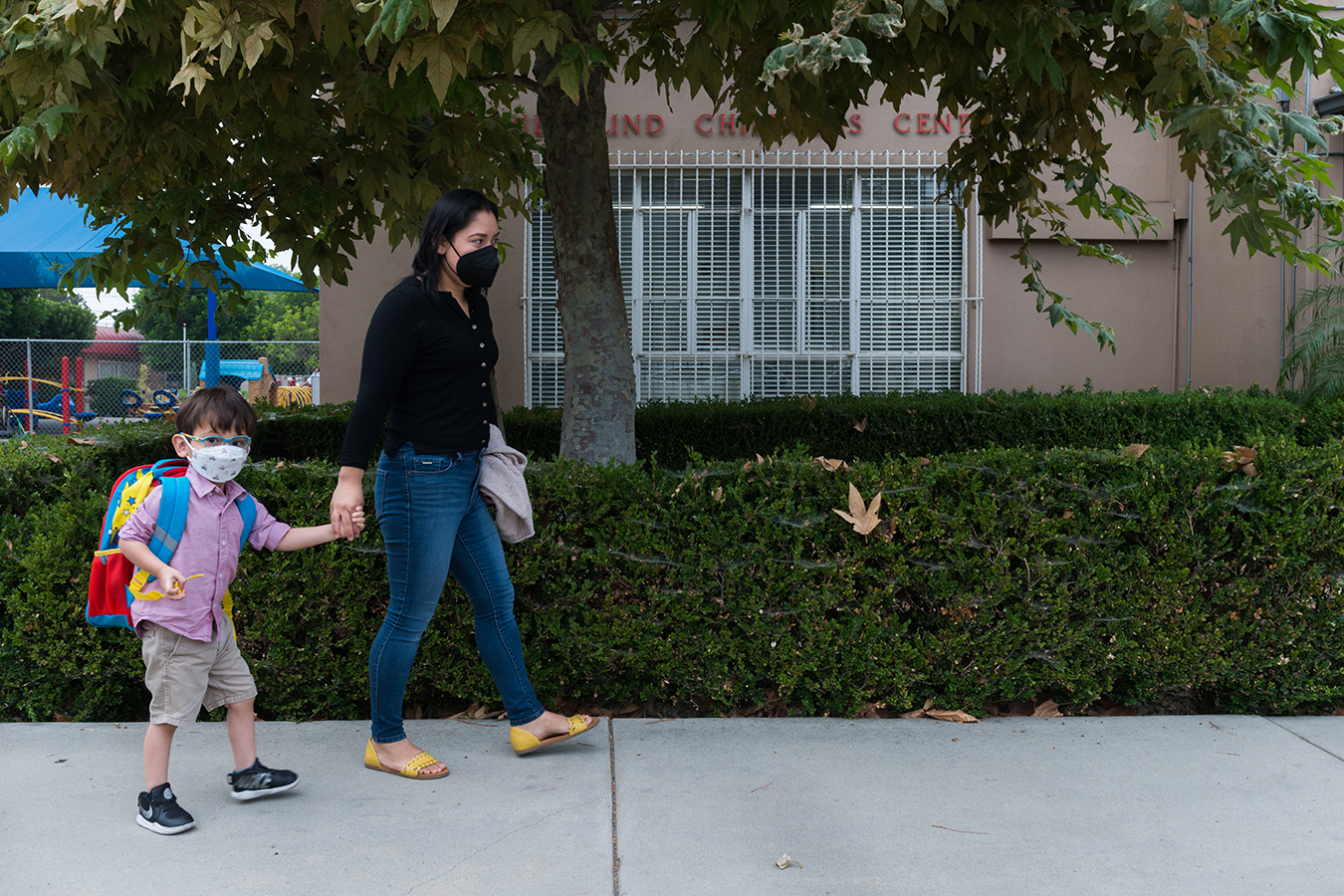 Martha Manzo drops off Christopher at his school, the Blind Children’s Center, in the East Hollywood neighborhood of Los Angeles. The center is a free preschool for children who are blind or visually impaired. Heidi de Marco, KHN

LOS ANGELES — Christopher Manzo, a boy with curly brown hair and bright-blue-and-yellow glasses, has lived a third of his five years at home because of the pandemic.

And he is more than ready for kindergarten.

Hand in hand with his mother, Martha Manzo, he walks into the Blind Children’s Center, a low-rise building nestled among apartment complexes in East Hollywood. In the brightly colored hallway, filled with paintings of animals, Manzo kneels to hug Christopher before he scurries unsteadily to his cubby.

Born with congenital hydrocephalus that damaged his brain and left him with severely impaired vision, cognitive difficulties and a lack of coordination, Christopher hasn’t missed only school the past 18 months — he’s missed out on a host of vital occupational, physical and language therapies, as well as socialization with other kids.

At home, Christopher couldn’t look at a computer screen long enough to attend therapies or classes on Zoom, said Manzo, in an interview conducted in Spanish. “He would strain his eyes, look away, and his attention would falter,” she said. “He couldn’t devote the same attention as a kid without disabilities.’’ 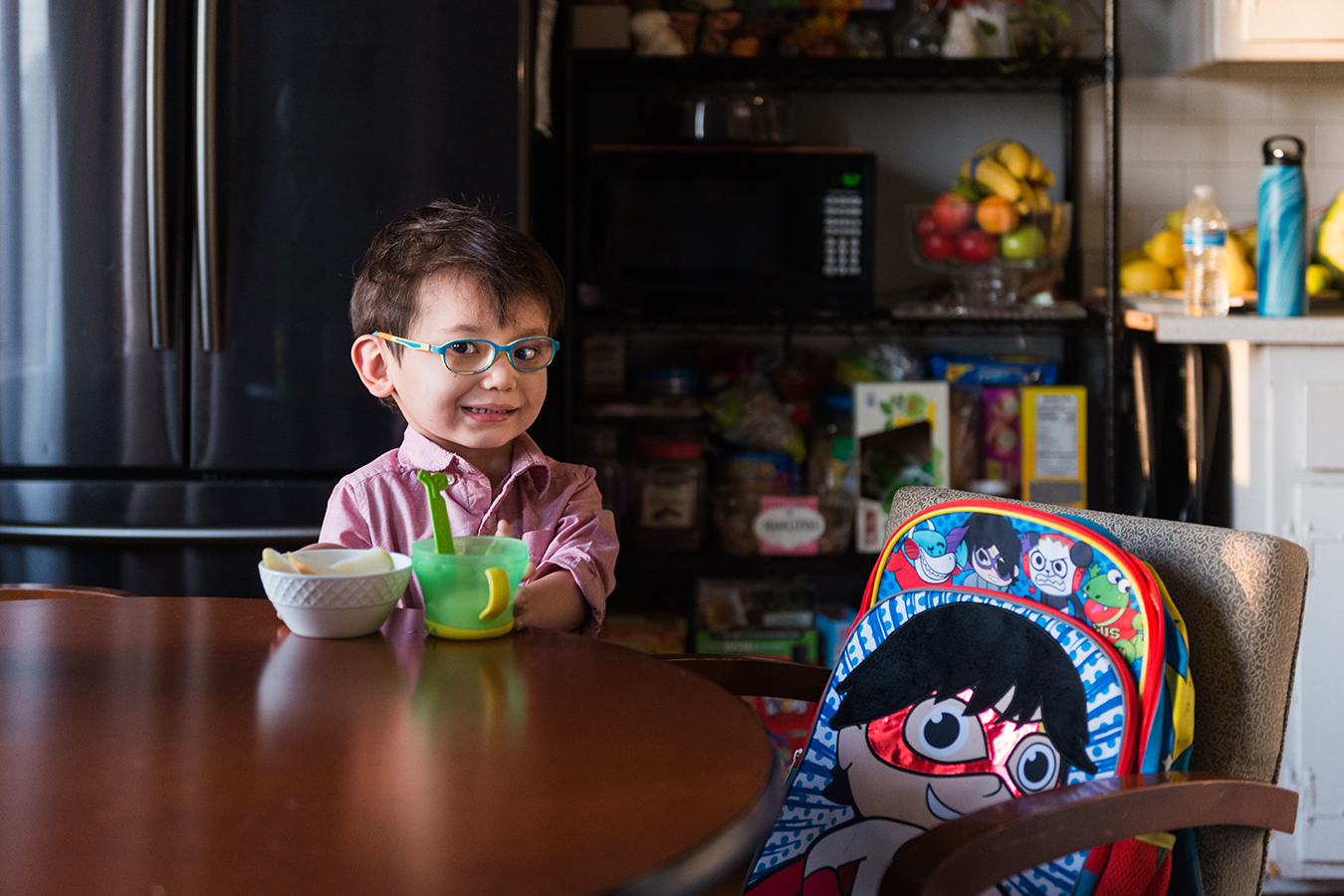 Christopher Manzo was born with congenital hydrocephalus and has severely impaired vision, cognitive difficulties and loss of coordination. He’s had five surgeries, all related to his diagnosis. Heidi de Marco, KHN

Christopher “could have advanced much more” since the pandemic hit if he hadn’t missed so much school, said Manzo, who is 36 and has three other children, ages 12, 10 and 8, whom she also has had to guide through months of home-schooling.

Yet the return to school raises particular health issues for Christopher and other children with disabilities who are at increased risk for serious bouts of covid-19, said his pediatrician at Children’s Hospital Los Angeles, Dr. Liza Mackintosh. Though he isn’t immunosuppressed, Christopher has trouble coughing up secretions, which leaves him vulnerable to lung and respiratory infections, she said.

Compared with other adults in contact with children, his parents, teachers and therapists “have to be more vigilant about mask-wearing, hand hygiene and social distancing,” she said. 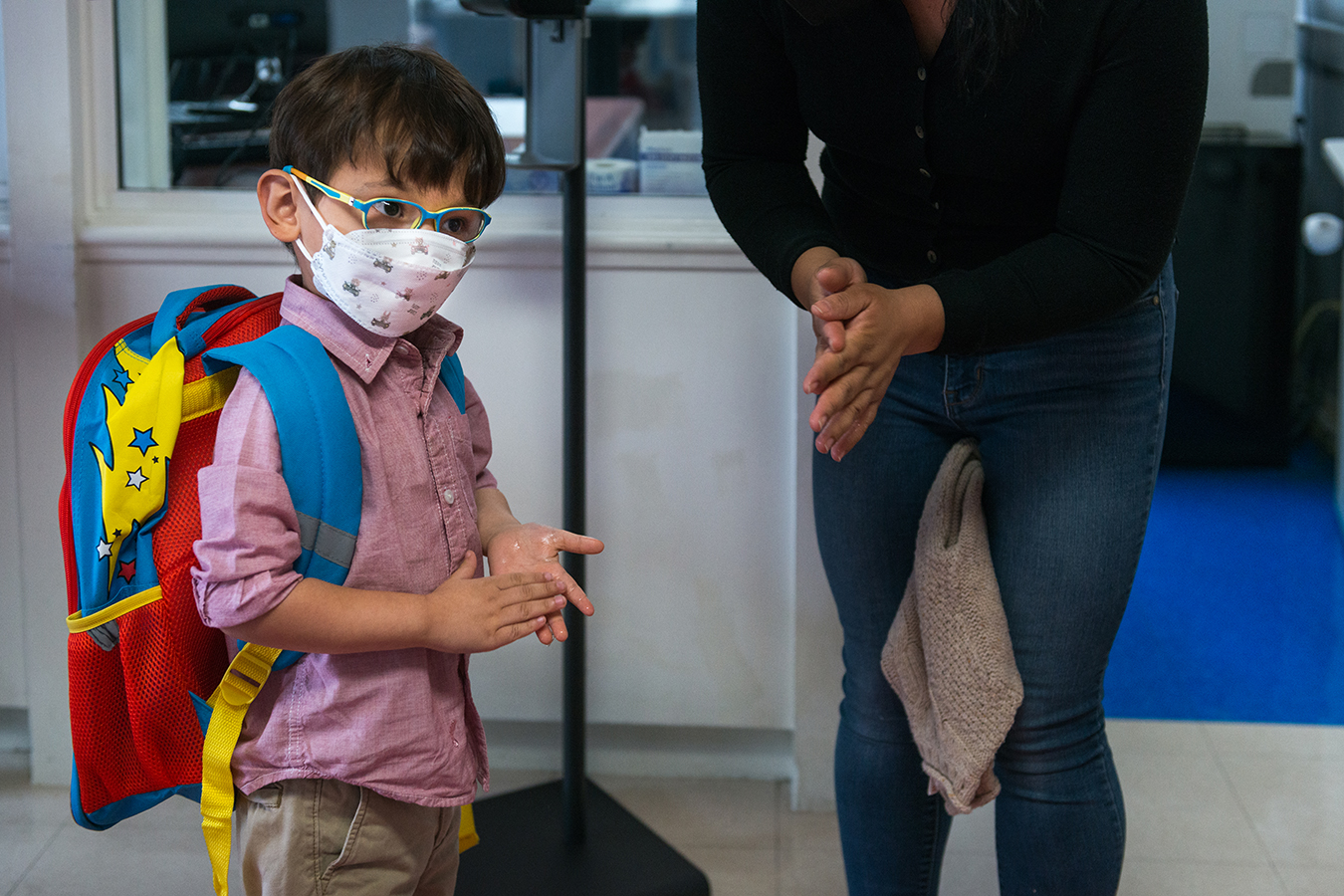 In short, Manzo was deeply worried about the threat of covid exposure Christopher faced at school. But it was a risk she felt he could no longer avoid, to get on with his life.

Trying to learn from home was “really hard on him,” Manzo said. “He couldn’t understand why he couldn’t go to school or the park or to his therapies.

“I know covid is still among us, but I also can’t keep him at home like he’s a crystal bubble and protect him,” she said. “He needs contact with other kids and his teachers.”

The challenges faced by Christopher during the pandemic have been shared by many of the roughly 7 million U.S. children and young adults, ages 3 to 21, with special needs. Online platforms usually don’t work for them. For example, Christopher needs to feel Braille letters to read — he can’t do that on a computer screen.

Students with disabilities had “sort of this double hit where it was very hard to access school services and very challenging to continue to work on developing new skills,” said Dr. Irene Koolwijk, a specialist in developmental-behavioral pediatrics at UCLA Health.

It took a lot of preparation to get Christopher and the 40 or so other children attending the Blind Children’s Center back into the building of the private, infant-to-kindergarten school. All the children are blind or visually impaired, and most also have disorders ranging from autism and albinism to cerebral palsy and epilepsy. The school practices reverse mainstreaming, in which a few children with typical development share the classroom with children with disabilities. 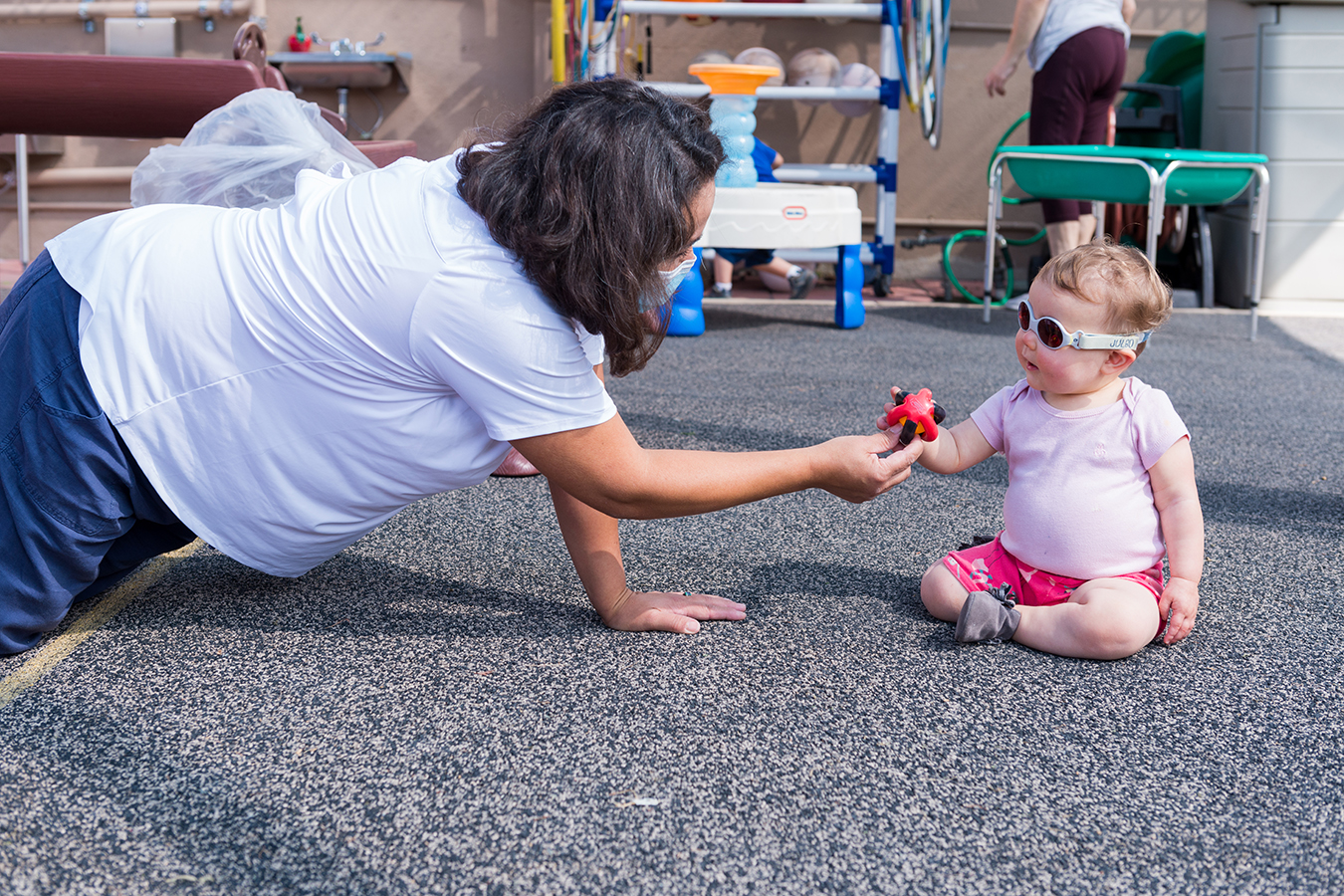 Alicia Marquez, a teacher for the infants at the Blind Children’s Center, hands Molly Baskin,1, a toy. Marquez says the school now provides more toys for the students so that sharing is limited. Heidi de Marco, KHN

Months before the school doors reopened, the center started teaching the students about wearing masks.

“Little by little, we started training the kids to wear masks on Zoom. It started off with the duration of a song, then two songs,” said Rosalinda Mendiola, adaptive services specialist at the Blind Children’s Center. “Our goal was that by the time we opened back up, they would be used to them.”

But it was difficult. Many children with special needs have a hard time wearing their masks and understanding the concept of distancing, said Mackintosh. Children with some forms of autism, in particular, have sensory issues that make it bothersome to have something on their faces. 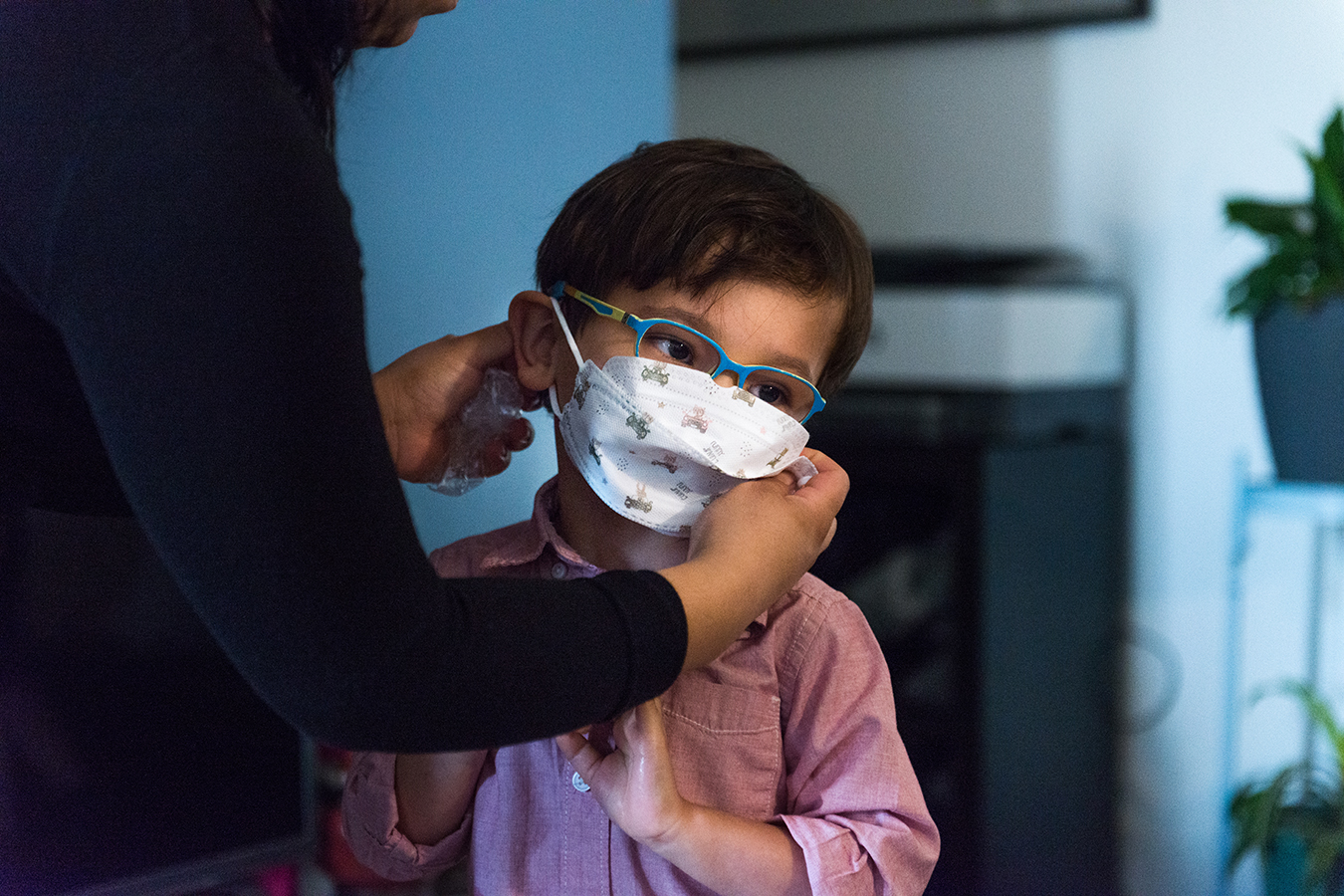 Christopher Manzo is now comfortable wearing a mask after months of refusing it. Experts say sometimes children with underlying medical conditions and developmental delays, like Christopher, have a much harder time wearing their masks and understanding the concept of distancing. Heidi de Marco, KHN

“Children learn the most from modeling. They watch their parents, their teachers, their friends,” said Bianca Ciebrant, the center’s director of early childhood education. “But children who are visually impaired and blind can’t see the mask-wearing. That’s probably one of the harder barriers.”

It took Christopher seven months to start wearing a mask. “At first, he didn’t even want it in front of his face,” said Manzo. “He started to slowly accept it when he saw his siblings wear it.”

To reopen in September, the school also adopted new covid safety protocols. All 30 staff members are vaccinated, temperature checks are performed at drop-off, and parents aren’t allowed inside classrooms.

All students wear masks except for three of them who have limited motor ability and couldn’t safely remove a mask or don’t understand the mask-wearing process “and therefore it becomes sensory overload and behavior breakdown,” Ciebrant said. 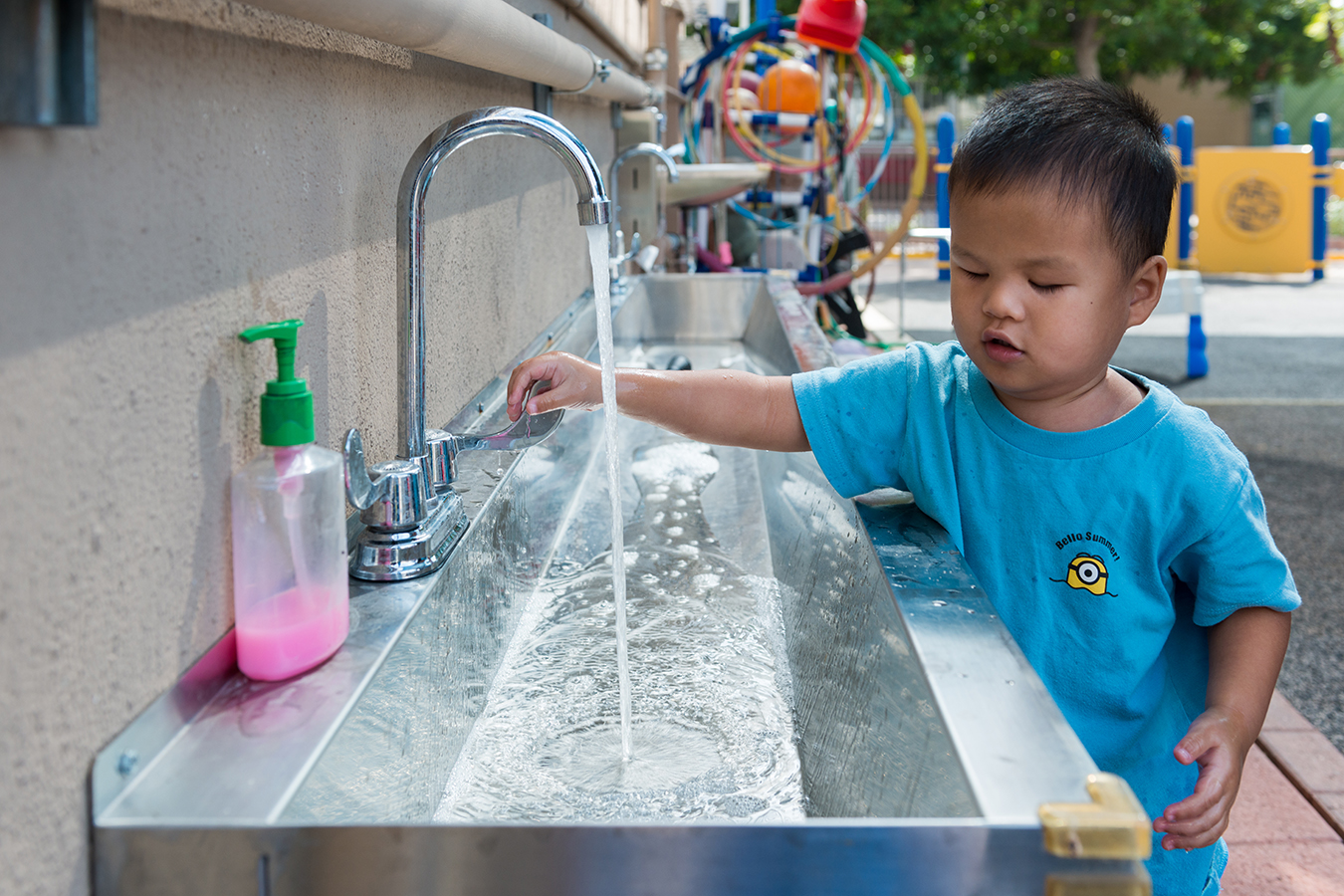 Oscar Kao, 3, washes his hands during recess using the outside sinks that were a pandemic-driven addition to the playground. Heidi de Marco, KHN

There are six kids in each class, overseen by a teacher and two assistants. Christopher needs someone near him to remind him where to walk and to hold on to the banister for balance.

With so many staffers around, “creating a shield of vaccinated individuals around the child is important to making the transition back to school as safe as possible,” said Dr. Christine Bottrell Mirzaian, a pediatrician at Children’s Hospital Los Angeles.

Martha and her husband, Fausto Manzo, were vaccinated last March, and their 12-year-old daughter, Samantha, also has been immunized against covid.

“Our health is important to be able to continue taking care of him,” Martha Manzo said. 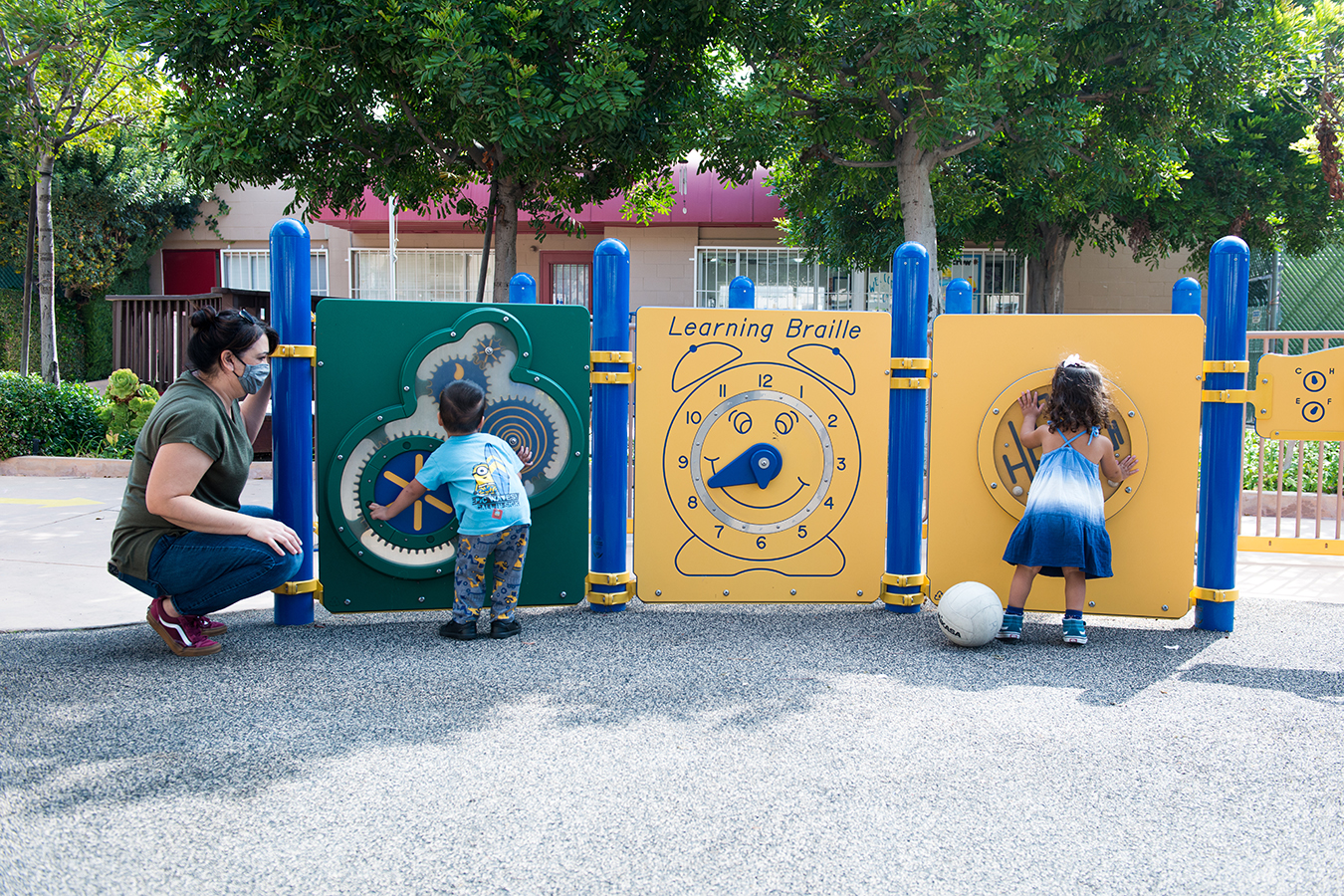 backpack to school. This is his last year at the center. When he started, he was only 2 and hadn’t learned to walk.

“He has received a lot of help,” Manzo said. “His movements have improved, and his communication skills.”

Christopher toddles around the playground during recess and greets his friends with a wave. “His balance is off, but he’s walking now,” his mother said. “I always wanted to see him run and explore.”

School staff members were happy to have their students back.

“We all felt this little warmth in our heart to hear their voices back in the hallway, whether it was crying or laughing or talking to their friends,” said Ciebrant. “This is what we’ve been waiting for, to hear those moments.

Christopher rests after running around the playground, waving at his classmates from a safe distance. Heidi de Marco KHN

New online tool predicts individual risks and benefits of joint replacemen...
The secret world of disabled gamers
Joint injury increases the risk of knee osteoarthritis
David, now 17, had to wait almost four months for an ankle foot orthosis
VERA: Virtual physical therapy in the comfort of your own home
AFOs for stroke: Early use does not limit long-term benefit