Around the world, over 17 million people have limited control of their bodies due to cerebral palsy (CP). A diagnosis of CP can be terrifying for new parents, as they wonder whether their child will ever sit, stand, walk, feed themselves, or have a normal life.

To support children in their quest for mobility, doctors often prescribe orthoses that are intended to correct disorders of the limbs or spine by correcting alignment or providing support. But while the field of medicine has advanced dramatically thanks to modern technology, orthoses have been manufactured the same way since the 1950s.

Faced with a choice between a standard, pre-made orthosis that would have been inadequate and uncomfortable for his son, or an expensive custom solution that would take weeks or months to be delivered, only to be made quickly obsolete by a growing child, one father took matters into his own hands.

Seven years ago, Matej’s and Mateja’s son Nik was born one month prematurely. Due to difficulties during childbirth, he suffered severe brain damage that led to cerebral palsy. Despite the grim initial outlook, Nik was tremendously motivated to be mobile, but the symptoms of his condition prevented him from standing or walking on his own.

Matej set out with a simple goal: to enable Nik to walk. Months of research and development followed, resulting in a custom-made, 3D printed orthosis that provides support and correction exactly where Nik needs them, which finally helped him take his first steps independently.

Inspired by the immediate improvement, the young parents teamed up with experts and set out on a bigger mission to help improve the quality of life of other children and change the status quo in the healthcare industry by offering truly custom, patient-matched orthotics.

“When you’re looking at your child, you instinctively know what to do in order to help him,” said Matej. “When Nik was unable to turn on his side, I decided to build a ramp so that he could easily flip on his belly. When he found out that this was fun, he was trying to do it all by himself.” Later, when he was trying to stand up, Nik’s parents put him in ski boots to stabilize his ankles.

In two or three days he was walking and we were not needed to care of him, so that he doesn’t fall anymore. The change was immediate, it was unbelievable. – Matej, Nik’s father

“He instantly felt confident, and you could see it in his eyes that he loved it and that he wanted to progress. This is what kept us going.” But Nik’s enthusiasm was soon hindered by his low muscle tone and short Achilles tendon, which forced him to walk on his toes.

“He was afraid of walking because his feet were in a really bad position. If he had tried to walk longer like that, he would have injured the bones and the joints,” said Petra Timošenko, Nik’s physiotherapist, who suggested trying out an ankle-foot orthosis (AFO) to help stabilize Nik’s foot

When he’d been using the orthosis for two or three months, for the first time, I saw Nik smiling, After four or five months, he became faster and faster. His steps became longer and his walking more smooth. He actually started to dance. – Petra, Nik’s physiotherapist

Pre-made orthotics are available off-the-shelf in standard shapes and sizes, and while some of them can be slightly adapted to the patient, trying to tackle multiple symptoms with the same device has limitations.

On the high-end, custom-made orthoses are handmade and CNC machined based on a plaster or foam box impression of the patient’s foot, but they have a lead time of several weeks and still require additional adjustments after fitting. Ankle-foot orthoses on the market today are generally uncomfortable to wear and only high-end, expensive models offer a custom-fit. Custom devices can cost thousands of dollars and take weeks for patients to receive. Formlabs

The current solutions are generally uncomfortable to wear and have a tendency to cause pain and skin irritations—often so much that children are unwilling to use them. Prices can easily run into the four figures, making orthoses cost prohibitive for most families, even those with top-tier insurance coverage. The issue is compounded as children outgrow the orthoses as quickly as they outgrow clothing.

“Based on my knowledge, I knew that a piece of plastic could not cost so much money,” said Matej, who has an engineering background and had worked as an R&D manager in the telecom industry for 12 years.

“The lack of comfort and high price combined with all the other cons were enough that I decided to do something about it. I didn’t have the solution at that time, but I wanted to find a better way to design it. I was just trying to help my son the best possible way.”

We’re surrounded by products made in limited, uniform sizes as businesses standardize products to make them as cost-effectively as possible. Manufacturing products with a custom fit is either impossible with traditional tools or requires complex processes that lead to high prices. While for most of us this results only in minor annoyances, like shoes that hurt your feet for the first few days, it seriously limits the effectiveness of devices in healthcare.

“I didn’t know how orthoses are produced currently, so I was able to look outside of the box,” said Matej. Having heard of 3D printing at work, he first tackled the point of manufacturing. After some research, he was convinced that the technology would provide the combination of high accuracy needed to achieve the perfect fit with the design freedom to create a custom device. Next, he tried multiple methods to digitize his son’s feet and learned 3D modeling to design the orthosis.

After six months of research and experimentation, he pieced together an innovative new workflow that is now patent pending: With Matej’s workflow, the patient’s feet are placed on a vacuum bag in the corrected position and 3D scanned. FormLabs

The first prototype Matej designed reached almost to the knee, just like traditional AFOs, but following Petra’s advice, he realized that this only hindered his son from walking more freely. He quickly iterated and designed a prototype that was barely taller than an insole, and fit entirely within a shoe. Often, patients who wear traditional AFOs are also forced to buy special extra-wide shoes, which are hard to find for children. At last, prototype number 13 was a full success.

“Now I can do much more sophisticated exercise with him. We can run on a treadmill, we can jump, because I know that his feet are in the right position and I can’t cause any deformation to his bones or joints, that might, on the long term, require an operation to correct. If he didn’t have this orthosis, his feet would be in danger.”

The orthosis keeps Nik’s foot in the corrected position—just as a cast keeps the broken bone aligned—and Petra can use physiotherapy to strengthen his muscles and ligaments. Orthoses are most effective at a young age when the children’s bodies can adapt as they grow. With the help of a series of custom devices that treat only the symptoms, Nik can improve faster and reach overall better results.

“The first version gave him confidence and stabilized him. The second version improved his overall walking smoothness. Then the third helped him get better posture, and that’s when he really started to enjoy the walking and started to play around. The fourth orthosis corrected his right foot that was off the center of his body, so now he’s able to stand with his feet together in a straightened, upright position,” said Matej. Nik’s orthosis is barely visible from the outside and fits inside his regular shoes. FormLabs

To obtain feedback from an expert, Matej presented his workflow to Dejan Tašner, a certified orthotist and prosthetist. After taking static and dynamic measurements of Nik’s feet both with and without the new orthoses, it was clear that Matej’s solution represented a novel approach in the field of orthotics.

“3D printing allows us to create orthotics with different thicknesses in different areas. We can apply a more thick area where it’s needed and minimal thickness to the areas where correction is not required. This is not possible with current solutions,” said Matej.

From 3D scanning to 3D printing, Matej can manufacture a custom-made orthosis in less than 24 hours for a fraction of the cost of traditional orthoses. 3D printing also allows him to manufacture more compact orthotics that fit into the children’s regular shoes, so they’re barely visible from the outside. Thanks to the highly precise, custom fit, the devices are comfortable to wear, without the skin irritation caused by traditional custom orthoses. “Orthoses don’t need to hurt, only without pain can the children accept them,” said Matej. 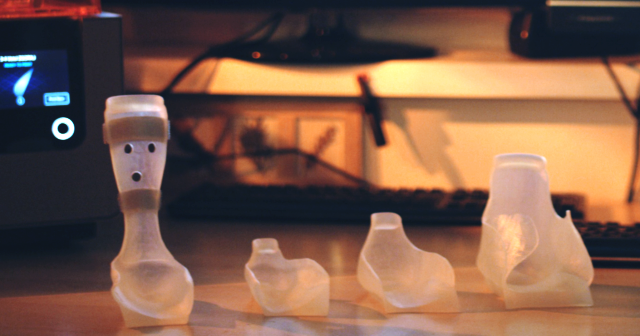 Following the encouragement from Dejan and Petra, Matej and his wife, Mateja, decided to patent and certify the workflow. This allows the process and components to meet standard requirements for medical devices, enabling clinical trials with other children.

After maintaining his day job for months and burying himself in legal and regulatory paperwork for most nights, Matej left his job and, alongside Mateja, Dejan, and Petra, formed the company aNImaKe—named after Nik—to focus full time on providing precise, patient-specific 3D printed orthotics to help other children in need.

“At the moment, we are testing with several patients with different pathologies from age three to 11. We already see improvements in terms of biomechanics, which is the main goal. But also, crucially, a positive change in sentiment that the parents see in the daily life of their children because they need to feel comfortable to use the orthosis often enough to improve their walking,” said Dejan. In the future, Matej and his team want to expand their technique to other areas of the body. They’re already experimenting with a hand brace that helps children with cerebral palsy and high muscle tone to spread their fingers so that they can crawl, grasp objects, and feel the world around them.

“We want to enlighten others in the medical industry about the tools that are available today to provide better options to the children,“ explained Matej.

Orthotics should be built for a person, and that should treat only the symptoms, not be standardized solutions that put them in boxes. – Matej, Nik’s father

New tools and advanced technologies like digital scanning and 3D printing are rapidly becoming affordable and accessible, bringing doctors closer to patients, and allowing them to deliver treatments and devices customized to better serve each unique individual. By showing a successful example, Matej and his team are working to inspire others and make precise, personalized, and affordable orthotics a reality.

Meanwhile, Matej’s first patient and source of inspiration can now walk and play with ease together with his brother. Over one and half years, Nik has used four different orthoses. His father is confident that the fifth won’t be needed.

Novel 3D imaging for chest wall anomalies in Calgary
Spooking up wheelchairs for Hallowe'en
Alberta school boards lobby to reinstate funding program for children with...
Parkinson's results beyond researchers' wildest dreams
Out on a limb: Valuable testimony
What is torticollis and deformational plagiocephaly?