‘This will, I believe, serve as a destination for many families.’

An inclusive playground to be built outside the Clareview Community Recreation Centre will be the first of its kind in Edmonton and only the second in Alberta. Construction is expected to start in the spring.

“This certainly represents a wonderful opportunity for growth and development and engagement and just getting to enjoy play… and the benefits can’t be overstated,” says Gary Dewar, Edmonton’s director of community recreation centres.

“[The playground] has been designed uniquely and specifically for people with all kinds of challenges.”

The 16,000-square-foot park will include double-wide ramps, a roller slide, a bucket seat with harness swing and a quiet zone designed for children with spectrum disorders.

“[Designers] have incorporated the needs of a disabled child, but disabled adults as well so they can interact with their children throughout the play areas,” Dewar said.

“This will, I believe, serve as a destination for many families.”

Dewar said 13 sites around the city were considered for the new playground.

The Clareview District Park location was chosen because it is surrounded by amenities like washrooms and is near a hospital and transit. The location was also due for an upgrade, according to a city report.

The $2-million project is a partnership between the City of Edmonton and Canadian Tire Jumpstart charity.

Jumpstart also comes with expertise and a network of suppliers which helps to keep the cost down and timeline short, he said.

Trish Bowman with Inclusion Alberta is glad to see steps taken to ensure accessibility, but would like to see it become more common.

“In 2020, it would be my expectation that any spaces we’re building for community are thoughtful of everyone, so that they’re all being constructed in a way that not only allows access, but invites access,” Bowman said.

“It says not just, ‘We’re adapting things for you,’ but actually, ‘We’re thinking about it before you’re here.’ Because we want you here.”

Many families with a child with special needs can become isolated, Bowman said. The Clareview park will not only help children form friendships, but adults too.

“While their kids are playing, they’re sitting on the bench and they start to get to know each other,” she said. “That’s a really important thing as well in creating community and neighbourhoods.”

Construction is expected to start this spring, with a large event planned for the opening of the park once it’s completed in the fall.

This will be the second Jumpstart playground built in Alberta. The first is in Calgary. 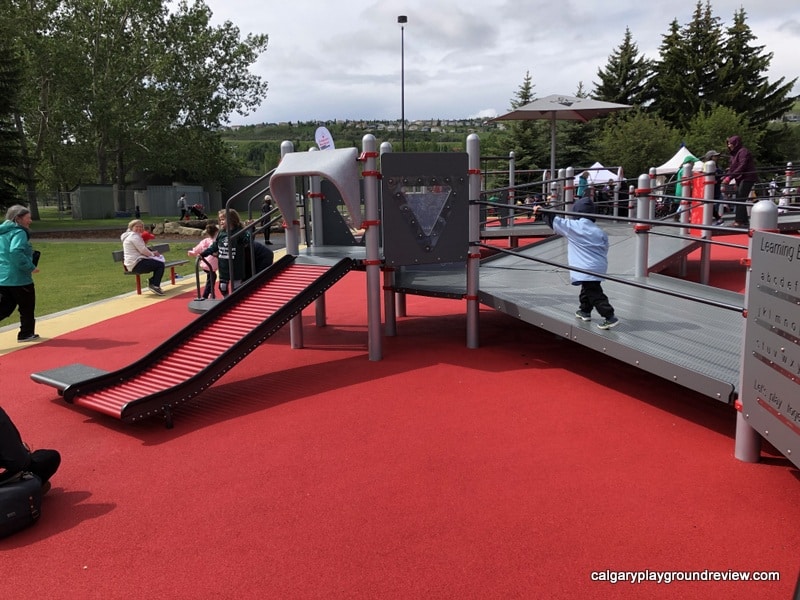 The ramp system at Shouldice Park is extensive. The ramps are wide and there are things to do and places to go. There are also sun shades but they weren’t up when we went in April. Calgary Playground Review

Also see
Accessible Parks for Kids and Families New York Times
As Playgrounds Start to Reopen, Here’s How to Keep Kids Safe New York Times
I redesigned a school playground for my PhD – and the children got better marks learning outside The Converstion
Scotland’s outdoor play initiative has some lessons for the rest of the world The Converstion
Canadian Tire Jumpstart Charities Brings Inclusive Play to Calgary City of Calgary
Jumpstart Inclusive and Accessible Playground Opens at Shouldice Park Habitat Systems