A decade ago young children who missed key developmental milestones — like walking or talking — too often fell through the cracks in northern Colorado’s Grand and Jackson counties. 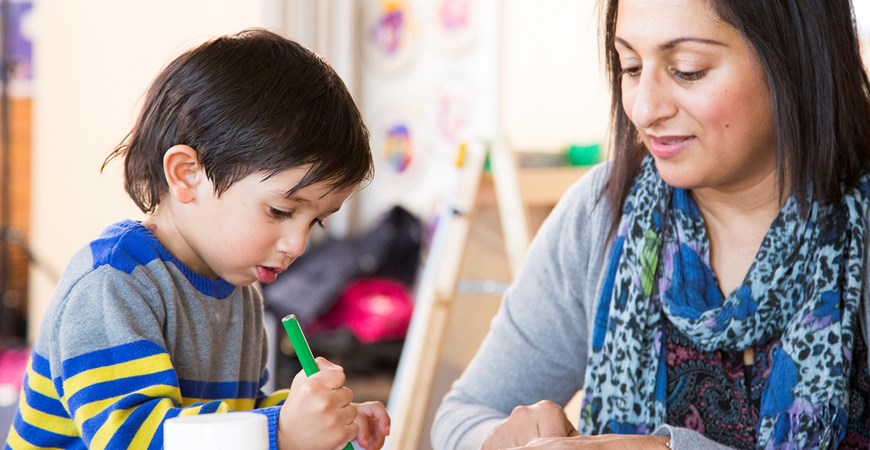 British families spend less than an hour of quality, focused time together per day. Action for Children

Some were never screened for delays as babies or toddlers. Others were screened, but not referred to the right place for a full evaluation. Many parents didn’t know that their children should be screened or that they could receive free therapy if significant delays were discovered.

In short, the local early intervention system was a mess.

Today, that’s changed because of a regional effort to get doctors, child care providers, therapy providers, and school officials on the same page as they work to meet a federal mandate requiring early intervention for children with developmental delays.

Members of the coalition that spearheaded the $320,000 Meeting Milestones Initiative say the project has boosted screening rates dramatically in the region. In 2014, only about 30% of children 5 and under got routine developmental screenings in Grand and Jackson counties. Now, nearly 80% do, and in some years the number has been close to 100%.

Catching delays and providing therapies to help children catch up in their earliest years not only capitalizes on a key period of brain growth, but can reduce the need for special education services later on.

Meeting Milestones relies in part on a software application that project leaders say is the first of its kind in Colorado. The app makes it easy to administer screenings electronically and share the results with key parties across the two counties — a rural area larger than Delaware and Rhode Island combined.

Plus, for those children identified as having worrisome delays, there’s a clear path for getting them help and a system of checks and balances to make sure they don’t fall by the wayside.

Katy Lois, the project manager for Meeting Milestones at the Grand Beginnings Early Childhood Council, said the project has led to a culture shift in the community.

“Five years later, after all that sweat, blood, and tearrs… [and] lots of technical assistance and marketing to families,” she said, “screening is just something everybody does.”

Lois said local data — which wasn’t consistently collected or tracked before Meeting Milestones came along — show that 3.6% of babies and toddlers in Grand and Jackson counties are identified as having delays, a bit higher than the national average of 2.8%.

The screening tool now used throughout the two counties is the “Ages and Stages Questionnaire,” a series of age-specific checklists that take parents 10 to 15 minutes to complete. For example, the version for a 16-month-old asks, “Does your child stack three small blocks or toys on top of each other by herself?” and “Does your child play with a doll or stuffed animal by hugging it?”

The scoring system flags children who aren’t hitting enough milestones so they can be referred for comprehensive evaluations. The Ages and Stages screenings are most often given at the doctor’s office during routine check-ups, but may also be offered at preschools or other community locations.

The idea for Meeting Milestones crystallized about eight years ago after a handful of local leaders raised the alarm about the inconsistencies and confusion surrounding the early intervention process.

At the time, referrals were increasing across the state, but Grand and Jackson counties didn’t seem to be experiencing the same bump.

“Our numbers were lower than what we were thinking they should be,” said Rhonda Hill, preschool director at Granby Elementary School in the East Grand school district.

Federal law, specifically the Individuals with Disabilities Education Act, IDEA requires that intervention services be provided to infants and toddlers with disabilities or certain kinds of developmental delays. The law also requires special education services for preschool-aged children with disabilities. A combination of federal and state funding, and sometimes local dollars or health insurance payments, covers the cost of the services.

In 2013, Lois was hired by Grand Beginnings to help lead the early intervention improvement process. She collaborated with other community leaders to bring every primary care practice and licensed child care provider to the table, first in Grand County and later in Jackson County. The group worked with a Littleton company, Patient Tools Inc., to develop the software application it envisioned.

In a rural area where dropping off paperwork can mean a 60-mile drive, a cohesive system of real-time alerts and notifications was especially appealing.

“That’s why we looked at leveraging some sort of technological tool,” Lois said.

There were plenty of stumbling blocks along the way, she said. Besides getting the app to work with different medical records systems and adhere to privacy rules, they also had to ensure that even if parents transmitted their child’s screening results to the wrong doctor or practice, they would still get the help they needed.

Alan Malik, president of Patient Tools, said the app helped bridge the divide between the medical establishment, which serves children 0-3 most regularly, and the early education community, which comes in later but fills an important role in preparing those children for school.

“That’s a big systemic problem at a national level right now,” he said. “You’ve got to knock down the barriers between these different groups at a real local level.”

Success in 3D bio-printing of cartilage
Canada as single-payer exemplar for universal health care in the United States
Dr. Peter Nieman: Reflecting on 30 years as a pediatrician in Calgary
Twin babies get helmets from Mary Free Bed
Revolutionary technology allows brain surgery without breaking the skin
Why is exercise important?