Young kids with various genetic disorders often have limited walking ability, requiring them to use wheelchairs. Yet, traditional wheelchairs can be too hard to push, while motorized ones tend to be expensive, heavy, and very bulky. Now a team of students at Brigham Young University have developed a lightweight powered wheelchair for two young brothers who have spinal muscular atrophy. 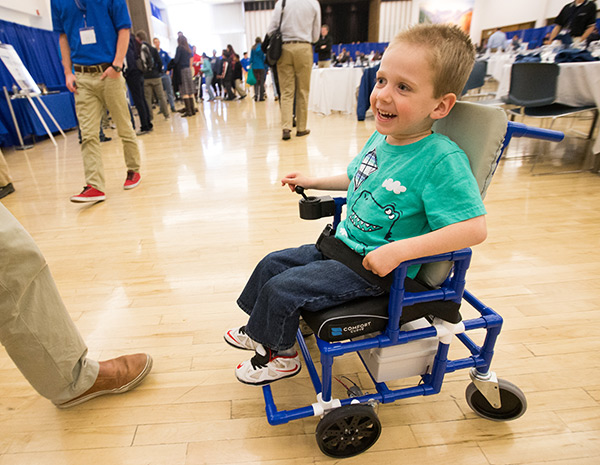 The frame of the chair is made out of cheap and readily available PVC pipes, allowing the whole device to weigh in at just over 20 lbs. There’s a battery under the seat and two electric motors power the front wheels. These are activated using a joystick on the hand-rest, allowing the kids to intuitively navigate wherever they want to go. Each of the two wheelchairs was built for under $500 using off-the-shelf components, a considerable savings compared to commercially available powered wheelchairs.

Most interestingly, the students will soon be releasing the parts list and construction plans for the wheelchairs, allowing just about anyone anywhere to build cheap and highly practical motorized wheelchairs.

Read more at Medgadget and Gizmodo

Seven medals for Team Canada at the CP World Games
We live with a cloud over our heads: Québecers say home care services fall...
Jacob Reichbart, Research Director
Biometric gloves coming to F1 racing in 2018
How Stephen Hawking reclaimed his voice—and helped others do the same
Relieving foot pressure with shoe fixes