With its practice bar, mirrored walls and lush orchestral music, the small dance studio in Bayside, Queens, seems like countless other ballet schools that nurture the dreams of little girls.

Parents peek in from a crowded waiting room as a patient teacher demonstrates first-position to little girls proud simply to be wearing tights, tutus and ballet slippers.

But this studio holds one special class a week for dancers whose movements do not exactly exhibit the refined control of a prima ballerina. There are no lithe leaps, perfect pirouettes or pointed toes here. Most girls cannot walk or stand, much less make a shallow curtsy. Their crutches and walkers lie nearby and their customized ballet slippers are stretched over leg braces. 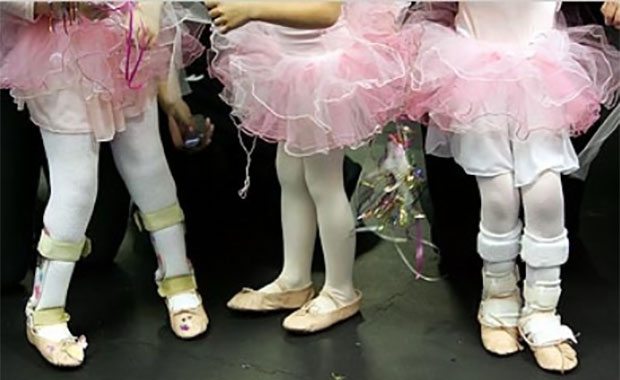 The eight little ballet students, who have cerebral palsy and other debilitating physical conditions, are assisted in class by teenage volunteers with strong healthy bodies and infinite patience. The teacher is Joann Ferrara, a physical therapist who owns and runs Associated Therapies, where most of the girls go for treatment.

Even at a tender age — the girls range from 3 to 7 — they grasp that they will never romp in a playground or flip onto a gym mat, let alone play hopscotch, tag or hide-and-seek. But being little girls, they are not immune to the dream of being a glamorous ballerina swathed in frilly pink, gliding gloriously on a stage in front of everyone.

“Every little girl wants to be a ballerina, and my daughter wanted to know why she couldn’t,” said Maria Siaba, whose daughter Veronica, 7, is in the class. “I would bring her into a ballet school and they said, ‘We can’t accommodate her.’ Outside, I’d have to explain to her that she couldn’t do what all the other girls are doing.”

For an hour a week, Veronica and seven other girls from Queens escape a world plagued by awkward physical motion and enter a room where elegant music is played and they get a taste of movement that is graceful, smooth, supple and refined. Ms. Ferrara teaches only the basics of ballet. The girls do not perform full pliés or pirouettes, and they are lifted for leaps. While she coaches the girls to lower and raise themselves and turn slowly, Ms. Ferrara constantly reminds them to smile and “be proud.” 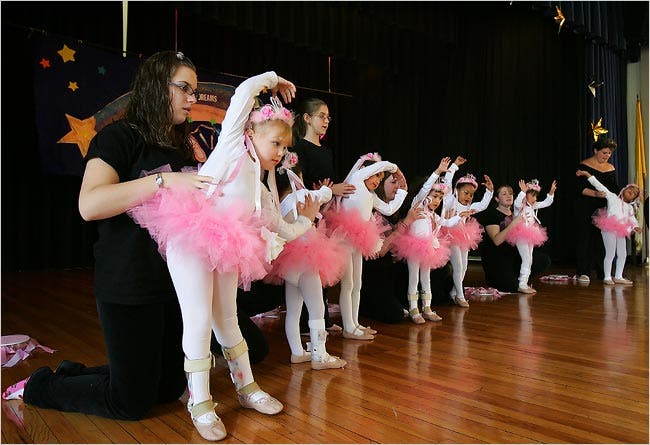 Young girls who have cerebral palsy and other debilitating physical conditions rehearsed for their annual recital, held on Sunday at Mary Louis Academy in Queens. One girl said she loved “Swan Lake” because “it’s about a girl who works very hard and never, ever gives up.” Photo: James Estrin, The New York Times.

And even if the limbs do not obey, the dancers have absorbed the traditional ballet ethic of disciplined hard work. One day all too soon, they will leave their ballet lessons behind and will work simply to stand or walk or move without being too ungainly.

“I just want them to feel the sheer joy of moving and to be proud of themselves,” Ms. Ferrara said. She began the dance class three years ago after hearing repeated laments from the families of girls she treated. “The parents all said their daughters wanted to take ballet like all the other girls, but no ballet schools would accept them,” she said.

She recruited a group of teenagers to assist the dancers and paired them up. Most pairs have been together ever since. When Monica Chaffardet, 5, began the class, her left side was so weak that she was barely able to use a walker. Heather O’Halleran, 16, of Flushing, has been so persistent with her that Monica is just about ready to stand with the use of a cane, and doctors hope that she will walk one day without any help.

“She’s dying to walk,” Ms. Ferrara whispered the other day in class as Monica danced to her favorite ballet, “The Nutcracker.” 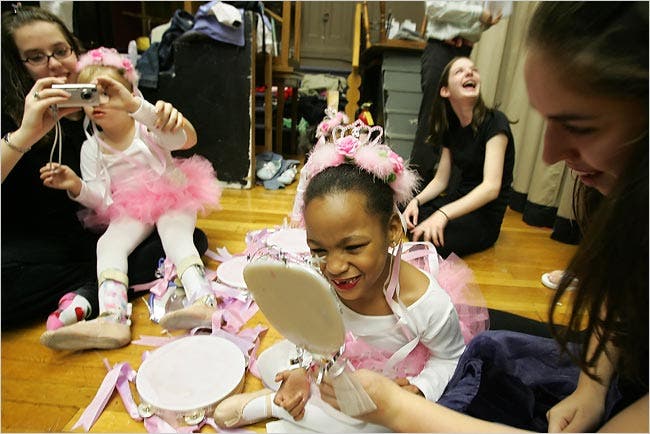 Shekinah Tiabo having her makeup applied before performing in a ballet recital. Photo: James Estrin, The New York Times.

Monica’s mother, Joann Chaffardet, said: “She’ll never be a prima ballerina. This isn’t about that. She just wants to be like everyone else. She doesn’t see the difference. When she saw her cousin, who’s the same age, taking ballet, she kept saying she wanted to do it, too, but the schools said it was an insurance risk to take her.

“We all know these girls are different, but this is to help them get up there and be like the other girls. Even if for a short time, they’re up there feeling like real ballerinas.”

Sophia Clarke, whose daughter Jessica is a student, said the class had helped Jessica’s self-esteem. “I never thought I’d say, ‘I’m taking my daughter to ballet class,’ ” she said. “I could never put her in a regular class because she falls easily and no one has the patience for her.”

The girls had their annual recital last Sunday in the auditorium of the Mary Louis Academy in Jamaica Estates. Backstage, assistants were pulling ballet slippers over the bulky plastic sheathing and hinges of leg braces, and helping the girls put on white tights and pink tutus. Pink fuzzy tiaras were adjusted and pink tambourines and fairy wands were distributed. The dancers were bursting with excitement as they checked their makeup and hair in the mirror. 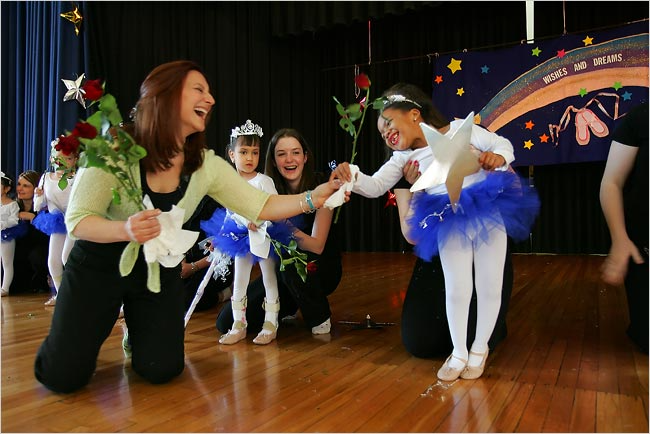 Shekinah Tiabo gets a rose from Joann Ferrara, a physical therapist who teaches a ballet class to girls with cerebral palsy and other debilitating conditions. Photo: James Estrin, The New York Times.

Monica resolved that during the recital she would try to stand for the first time in front of her dad, John Chaffardet, who was in the audience.

Veronica sat in the lap of her helper, Christina Arfsten, 16, of Flushing, and said her favorite ballet was “Swan Lake” because “it’s about a girl who works very hard and never, ever gives up.”

She continued: “Ballet made me realize I can still do stuff that other kids can do. It’s a great opportunity to do something new and keep trying and realize you can do something you thought you couldn’t do. Even if you feel scared, it’s the same for anything: If you don’t try, you’ll never know what you can do.”

The recital show, called “Wishes and Dreams,” featured the dancers of Associated Therapies performing to excerpts from “Swan Lake” and “The Nutcracker.” The girls stood in a line onstage, supported by their assistants behind them, lifting and turning them to the music.

The audience included some of Ms. Ferrara’s other patients, who watched proudly and shed tears of pride, not pity. For the finale, “When You Wish Upon a Star,” the dancers held shiny paper stars. When the music stopped, Jessica held hers aloft and yelled, “Yea, we did it.”

The audience bathed the girls in cheers as Ms. Ferrara handed each ballerina a red rose. Monica held her rose in one hand and used the other to steady herself with her ribbon-wrapped cane. Heather gently released her and beamed as she stood by herself, held up by applause and her father’s quivering smile.