Tuning of ankle foot orthoses (AFOs) and AFO footwear combinations can significantly improve gait in patients with neuromuscular impairments. Even so, some pat­ients still prefer their untuned devices, which has led researchers and clinicians to re-examine their approach to intervention. As researchers and clinicians have continued to refine the tuning of ankle foot orthoses (AFOs) and AFO-footwear combinations, recent findings suggest an occasional disconnect between biomechanical results and patient satisfaction.

The research is still preliminary, and the extent to which its results are anomalous, or may instead affect future tuning protocols, remains to be seen. Nevertheless, experts have taken notice, and deeper inspection of the phenomenon is already leading to new revelations about the effect of tuning on the whole patient, particularly his or her comfort levels and happiness.

Consider a small study presented at the annual meeting of the American Academy of Orthotists and Prosthetists (AAOP) earlier this year.[1] Clinicians from the Rehabilitation Institute of Chicago (RIC) examined the effects of tuning AFOs on dynamic balance in six patients (one of whom subsequently dropped out) with hemiparesis following a stroke, all of whom had worn untuned AFOs since their rehabilitation began an average of six months earlier. Although the tuned AFOs were associated with stable balance scores and less knee hyperextension than the untuned devices, only one of the five patients who completed the study preferred the tuned AFO to the existing one. 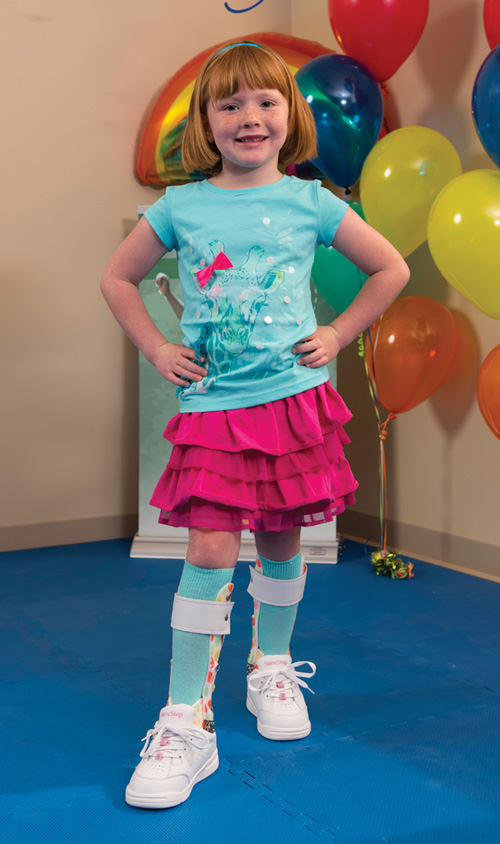 “Initially, we did a full evaluation to assess patients’ range of motion and muscle strength,” said Johnson, who has since moved from RIC to Mary Free Bed Rehabilitation Hospital in Grand Rapids, MI. “We wanted to create the AFO, with shoe modifications, to get what we wanted from gait—a nice rollover with a good entrance to and exit from stance phase, with ten to twelve degrees of shank-to-vertical angle at midstance. We had subjects walk in their original AFO, so we had a baseline for that and barefoot walking, then fit them with the new AFO, tuned them, and videotaped them then and a month later.”

Although, as noted, the tuned AFOs offered some biomechanical improvements to gait—the patients even saw them on video—their confidence in their balance capabilities decreased.

“I think there was such a big difference between the original and the tuned AFOs, we were pushing them outside of their comfort zone,” Johnson acknowledged.

For Donald McGovern, CPO, who also practices at RIC (he had worked with Johnson previously but was not involved in this study), the research raised interesting questions about the best way to approach stroke rehab.

“This suggests that the motor pattern a person gets into, when they first get up after a stroke, is what they’ll continue to be comfortable with—whether it’s a good pattern or a bad one,” McGovern said. “Katie found that tuning can definitely improve ambulation in individuals, but if a patient has already established a motor pattern and they’re not comfortable changing it, they’re going to go back to what they’re used to.”

Another recent study suggests the importance of the first intervention. This June, researchers in Scotland published research concluding that custom-tuned AFOs, which controlled shank and ankle in eight early stroke patients, contributed to significant improvements in walking speed, step length, and cadence, versus walking with shoes only.[2] The study didn’t compare tuned AFOs to untuned ones, so it’s difficult to extrapolate conclusions in that regard, but it got the attention of other clinicians, including McGovern.

“It indicates that, if we can get people up in the tuned AFO sooner, we could probably have much better results,” he said.

Elaine Owen, MSc, MCSP, a pediatric physical therapist at the Child Development Center in Bangor, North Wales, UK, attended Johnson’s AAOP presentation. She was particularly struck by the fact that the one study participant who preferred the tuned AFO had complained of extreme pain related to knee hyperextension in the untuned model. This made perfect sense to her.

“He was willing to tolerate a big change because it got rid of his pain,” Owen said. “When you tune an AFO to make the gait more normal, from heel strike until the toes are flat on the floor, you have to do knee flexion in loading stance—and to do that, you have to have strong quadriceps. If the subjects had been walking on hyperextended knees for years, they probably had very weak quads. With a tuned AFO, they’ll worry that they’ll collapse. Ideally, you’d improve the alignment and strengthen the quad gradually, to let them get acclimatized. You also want to do motor learning, do things in tiny increments until you get where you want while allowing them to learn a different walking pattern that feels normal to them again.”

Katie Johnson agreed, noting that patients needed to relearn how to walk, not only after the stroke, but also after an intervention with an untuned AFO.

“If they’re already used to that, do we start them out slowly, then build them up to the optimal angle?” she asked. “Do we need to get physical therapy involved? Can we begin this right away, so they don’t get into that hyperextension pattern? There are a lot of factors, and I’d love to keep going with this research, because we do see kinematic improvement.”

Another small study presented at the AAOP meeting reported similar conclusions. In that case, researchers from Northwestern University in Evanston, IL, found that although two children with cerebral palsy experienced improved kinematic and balance functions with a tuned AFO, only one was satisfied with it.[3]

“It’s fair to say that for [the unsatisfied] child, there was a disconnect between the biomechanical and functional improvements,” said lead author Stefania Fatone, PhD, BPO(Hons), a research associate professor in physical medicine and rehabilitation at Northwestern. “It’s possible to be less than fully satisfied with some aspects of an orthosis such as fit, comfort, freedom from skin abrasions, and pain, even if it provides improved function in terms of its biomechanical aspects.”