Five men with complete motor paralysis were able to voluntarily generate step-like movements thanks to a new strategy that non-invasively delivers electrical stimulation to their spinal cords, according to a new study funded in part by the National Institutes of Health. The strategy, called transcutaneous stimulation, delivers electrical current to the spinal cord by way of electrodes strategically placed on the skin of the lower back. This expands to nine the number of completely paralyzed individuals who have achieved voluntary movement while receiving spinal stimulation, though this is the first time the stimulation was delivered non-invasively. Previously it was delivered via an electrical stimulation device surgically implanted on the spinal cord.

In the study, the men’s movements occurred while their legs were suspended in braces that hung from the ceiling, allowing them to move freely without resistance from gravity. Movement in this environment is not comparable to walking; nevertheless, the results signal significant progress towards the eventual goal of developing a therapy for a wide range of individuals with spinal cord injury. A 42-year-old man who was paralyzed following a wrestling injury was able to voluntarily move his legs, thanks to the new approach.

“These encouraging results provide continued evidence that spinal cord injury may no longer mean a life-long sentence of paralysis and support the need for more research,” said Roderic Pettigrew PhD MD, director of the National Institute of Biomedical Imaging and Bioengineering at NIH. “The potential to offer a life-changing therapy to patients without requiring surgery would be a major advance; it could greatly expand the number of individuals who might benefit from spinal stimulation. It’s a wonderful example of the power that comes from combining advances in basic biological research with technological innovation.”

The study was conducted by a team of researchers at the University of California, Los Angeles; University of California, San Francisco; and the Pavlov Institute, St. Petersburg, Russia. The team was led by V. Reggie Edgerton PhD, a distinguished professor of integrative biology and physiology at UCLA and Yury Gerasimenko PhD, director of the laboratory of movement physiology at Pavlov Institute and a researcher in UCLA’s Department of Integrative Biology and Physiology. They reported their results in the Journal of Neurotrauma. 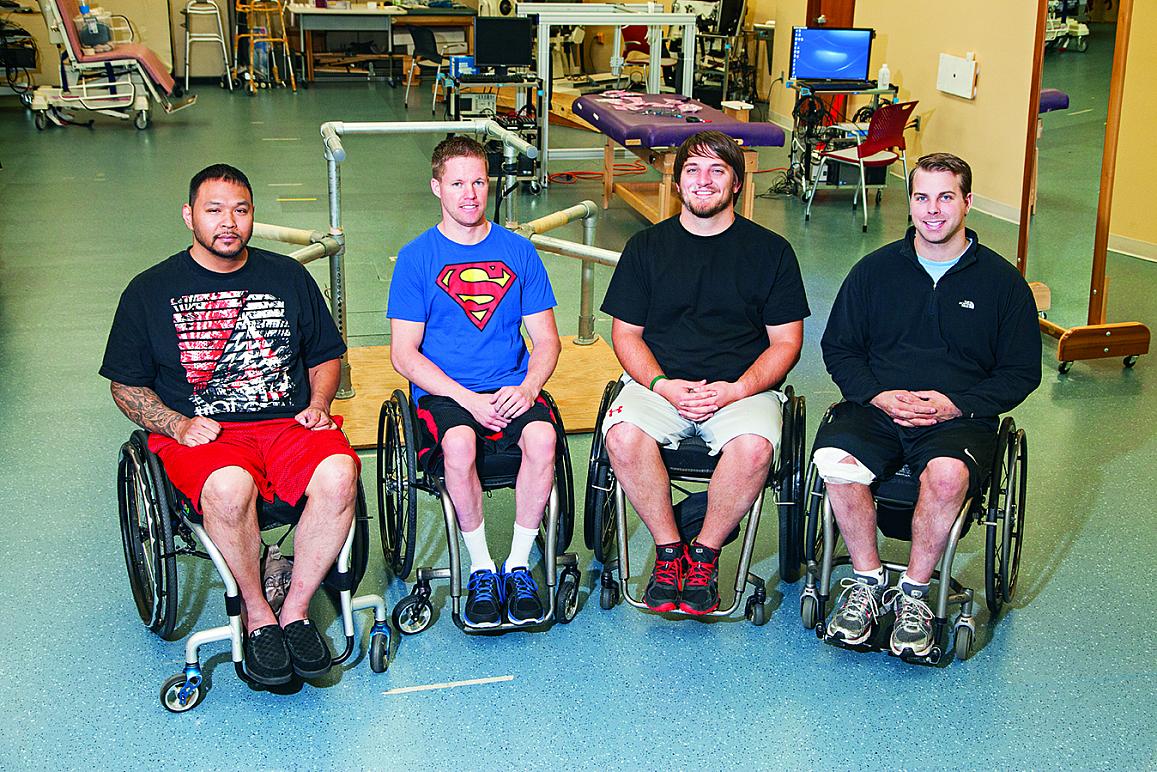 In a study published a little over a year ago, Edgerton—along with Susan Harkema PhD, and Claudia Angeli PhD, from the University of Louisville, Kentucky—reported that four men with complete motor paralysis were able to generate some voluntary movements while receiving electrical stimulation to their spinal cords. The stimulation came from a device called an epidural stimulator that was surgically implanted on the surface of the men’s spinal cords. On the heels of that success, Edgerton and colleagues began developing a strategy for delivering stimulation to the spinal cord non-invasively, believing it could greatly expand the number of paralyzed individuals who could potentially benefit from spinal stimulation.

“There are a lot of individuals with spinal cord injury that have already gone through many surgeries and some of them might not be up to or capable of going through another,” said Edgerton. “The other potentially high impact is that this intervention could be close to one-tenth the cost of an implanted stimulator.”

During this most recent study, five men—each paralyzed for more than two years—underwent a series of 45 minute sessions, once a week, for approximately 18 weeks, to determine the effects of non-invasive electrical stimulation on their ability to move their legs.

In addition to stimulation, the men received several minutes of conditioning each session, during which their legs were moved manually for them in a step-like pattern. The goal of the conditioning was to assess whether physical training combined with electrical stimulation could enhance efforts to move voluntarily. For the final four weeks of the study, the men were given the pharmacological drug buspirone, which mimics the action of serotonin and has been shown to induce locomotion in mice with spinal cord injuries. While receiving the stimulation, the men were instructed at different points to either try to move their legs or to remain passive.

Surprisingly, by the end of the study, and following the addition of buspirone, the men were able to move their legs with no stimulation at all and their range of movement was—on average—the same as when they were moving while receiving stimulation.

“It’s as if we’ve reawakened some networks so that once the individuals learned how to use those networks, they become less dependent and even independent of the stimulation,” said Edgerton.

The researchers also made extensive recordings of electrical signals generated in the calf muscle and the muscle directly below the calf while the men attempted to flex their feet during stimulation. Over time, these signals increased with the same amount of stimulation, further supporting the hypothesis of re-established communication between the brain and spinal cord.

Edgerton has already initiated a new study to see whether these same men can be trained with non-invasive spinal stimulation to fully bear their weight, a feat that the four men with surgically implanted stimulators have already achieved. In addition, he is interested in determining whether, similar to epidural stimulation, non-invasive stimulation can help individuals regain some autonomic functions lost due to paralysis such as the ability to sweat, regulate blood pressure, and control bladder, bowel, and sexual function.

The hope is that further research can help determine whether non-invasive stimulation can restore function that will truly impact patient lives.

Edgerton also wants to test non-invasive stimulation on individuals who have partial paralysis. “We have focused on individuals with complete paralysis throughout this whole process because we knew that was going to be the toughest patient population to see changes in. We’ve always thought, and we have every reason to believe, that those individuals with partial injuries have even more room for improvement,” said Edgerton.

Though a non-invasive stimulation could offer advantages over a surgically implanted device, Edgerton says both need to continue to be developed. For example, a non-invasive stimulator might be useful in determining whether a patient will be receptive to neuromodulation, which could then help determine whether undergoing surgery to implant a stimulator is warranted. Alternatively, Edgerton speculates it may be possible early after an injury for non-invasive stimulation to help patients achieve a certain level of motor control that then allows them to continue to improve with physical rehabilitation and avoid surgery altogether.

“All patients are going to need something slightly different, and maybe non-invasive stimulation is going to be best in some cases and epidural stimulation in others,” said Edgerton. “What we need to do is maximize the clinical tool box that we have so that the physician and the patient can select a therapy that is best for them.”

Edgerton estimates that cost to patients of the new approach could be one-tenth the cost of treatment using the surgical epidural stimulator (which is also still experimental) — and, because no surgery is required, it would likely be more easily available to more patients.