Although physical therapists and parents often strive for attaining normal gait in children with neuromotor disorders, a new study from researchers at the University of Alberta in Edmonton, Canada, indicates that children undergoing robotic gait training therapy may not share the same enthusiasm for this goal. When Carson was born he was a very healthy infant. With around 15 months Cerebral Palsy was diagnosed based on an inverted right foot and leg. Today, Carson is a patient at the Cincinnati Children’s Hospital where he improves his mobility with the Lokomat therapy.

Over about 10 weeks, the children underwent 16 sessions of robotic gait training, which involved stepping over blocks, active hip extension against resistance, and playing with a ball while walking. The sessions also included video games in which children had to do specific movements to advance in play.

The study underscores the need for research that focuses on the opinion and voices of young patients, who often get mixed messages. 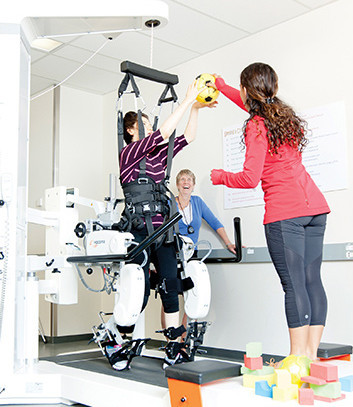 Researchers interviewed children and parents after the child’s last robotic training session. They asked parents about their expectations, experiences, and perceived outcomes with regard to the robotic trainer and walking goals for their child. Questions for children were designed to get their perspective on walking, as well as how they felt about using the trainer.

Parents generally expressed interest in continuing robotic gait training, felt it made their children more confident, and assumed their children found the games engaging and that they valued being able to walk like a typically developing child.

The children had more mixed impressions of the robotic trainer, finding it alternately “fun,” “boring,” and even “uncomfor­table/painful.” Young respondents also did not echo their parents’ point of view on “normal” gait, said lead author Shanon Phelan, PhD, assistant professor of occupational therapy at the University of Alberta. “They often equated normal walking with their typical gait, weren’t always sure whether the robot was helping them, and didn’t universally find it fun or engaging.”

Parents thought robotic training, which took place at Holland Bloorview Kids Rehabilitation Hospital in Toronto, boosted children’s confidence, but the children didn’t express this, and some felt anxiety about engaging the technology. Also a prominent problem for children was skin irritation caused by the trainer’s straps.

Both children and parents, however, said they valued the interactions with their therapists regardless of the technology.

“This study calls for critical reflection on why and how one might engage children in gait-related rehabilitation in ways that bring children’s desires and expectations to the forefront,” said Phelan. “This challenges clinicians to rethink how gait-related interventions are presented to children and families and how goals and outcomes are framed. For example, if a child is ambivalent about the quality of his or her gait, or [already] sees his or her gait pattern as ‘normal,’ one might consider presenting the benefits of an intervention in ways that highlight what is meaningful to the child and reinforce their abilities and positive self-identity.”

The study underscores the need for research that focuses on the opinion and voices of young patients, who often get mixed messages, she said.

“People in their lives often reinforce the idea of social acceptance. They hear, ‘there is nothing wrong with the way you walk,’ yet they participate in therapy to work on walking more like their same-aged, nondisabled peers,” she said. “When we focus solely on the physical aspects of walking/gait training, we can forget about the social and emotional implications for children.”

Theresa Sukal Moulton, PT, DPT, assistant research professor at Northwestern University in Evanston, IL, has worked extensively with children with CP using therapeutic robotic devices. Despite the inability to generalize the feelings, perceptions, and goals of this small cohort of patients onto all children with gait disorders, the study brings significant considerations to light, she said.

“The mismatch between a parent’s and child’s goals and perceptions about the effectiveness of therapeutic modalities is not uncommon in my clinical experience,” said Moulton. “Pediatric clinicians have the unique challenge of treating the whole family, so the perspective of both parents and patients must be considered and balanced, in an age-appropriate way.”

Gait training is a fundamental intervention in pediatric rehabilitation. At present, over-ground assistive devices and treadmills dominate the field, but we’re now seeing emerging robotic technologies that offer solutions to normalize and enhance the quality of gait mainly through the application of motor learning principles and the use of dynamic weight-bearing systems. We need to learn more about these technologies, what they offer and what their limitations might be.

One new qualitative study on robotics has just been published and it carries an important message: the goals and aims of clinicians need to remain sensitive to the goals and needs of the children being treated. Shanon Phelan and her colleagues at the University of Alberta in Canada have just published What is it like to walk with the help of a robot? Children’s perspectives on robotic gait training technology in the journal Disability and Rehabilitation and it’s an important contribution.

In Phelan’s study, the five participants were children with cerebral palsy with GMFCS levels II or III. These children were sampled from a larger randomized controlled study taking place simultaneously and comparing Lokomat therapy (a treadmill-based, robotic gait trainer with dynamic weight bearing support) to traditional gait training approaches. These five children were first observed at their Lokomat sessions and later took part in an interview.

From the interview, the researchers describe the children as having “mixed impressions” towards the robotic technology. The children were not completely convinced or excited by the technology and the need to “walk normally” and even expressed some initial anxiety and fears about its use. Additionally, even though the Lokomat provided screen-based games and other forms of engagement, the children became bored after walking in the device.

Notably, what the children valued above the actual therapy was the interaction between themselves and the therapists. This highlights the importance of human touch and relationships, something we all would do well to remember as we evaluate the available interventions for gait training.

Quickie’s new Q300 M mini has the tightest power chair turning radius on t...
No obstacle too big for this middle-school student with cerebral palsy
New phone app for patients with spina bifida
Parents file human rights complaint after girl with leg braces barred from...
Arthritis of the knee: Ten exercises
Serial casting had negative effect on health-related quality of life for p...