The Sunshine Coast teenager – who likes Doctor Who, Marvel movies and Star Wars but is most passionate about aviation – will give his first presentation on video editing at Brisbane’s Apple store on Thursday night. Hills will speak specifically about the impact that Switch Control, an accessibility program built into iOS and OS X, has had on allowing his career to flourish.

Hills lives with cerebral palsy and quadriplegia, and relies on technology and software he can control with a button located at the back of his wheelchair headrest.

Tapping the button with his head allows Hills to toggle through screens, surf the web, and edit video content.

“Whenever I get to show people what I’m capable of and I see their absolute amazement and help them see that it is also possible for them to be more capable, it inspires me to keep on going,” he said via email.

“When I get emails from all around the world from someone asking for my advice, I really enjoy being able to help them.”

Hills began working with PC computers as a youngster, but discovered Apples aged 14.

“I fell in love with the way the Mac looked and worked, so my move to Apple didn’t actually have anything to do with assistive technology,” he said.

“However, since then I have experienced more of Apple’s approach to accessibility, especially over the past 12 months when they have added Switch support for Macs and iOS devices and I’m very happy with the way it is heading.”

Hills’ talk marks Global Accessibility Awareness Day, a cause he is devoted to.
“I’m a proud Accessibility Ambassador, and love helping other people access technology to overcome their disabilities,” he said.

“For example, I recently wrote a guest blog post for AtMac describing how a person with visual impairment can access an iPhone and iPad without needing to see or touch the device.”

Having qualified as an Apple Certified Professional in editing software Final Cut Pro X and completed Video Production with RMIT University, Hills has started his own business, Switched-On Video Editing.

“I have created a series of YouTube videos about the intersection between Technology and disability,” he said. “I have also produced videos for the Able Movement, Queensland Health, and Control Bionics to name a few.”

Hills will be assisted in his Apple store presentation by Alex, a computerised voice assistant. Unlike the famous computerised voice of Stephen Hawking, Alex is a friend – and occasional foil – of Hills, and the pair banter and argue like old friends.

The teen hopes to help spread the happiness he has found by being able to pursue his vocation.

“Even though verbal communication is a barrier for me, I can overcome that and make a difference in peoples’ lives using email and social media,” she said.

Christopher Hills will discuss assistive technology at the Brisbane Apple store, Macarthur Chambers, from 5-6pm on Thursday May 21.

Hills runs Switched-On Video Editing in his home office on the Sunshine Coast in Queensland, Australia. He produces, directs and edits videos using sophisticated and complex film software that many people struggle to perfect. Hills, however, is a master of the technology, which he operates using only the muscles in his neck, thanks to a switch on his wheelchair.

The switch, mounted next to his head, allows Hills to control everything the way a mouse would. All he has to do is move his head to create finely wrought films that would be beyond the capabilities of most people with fully functioning limbs, and his talent has earned him accolades from several high-profile clients. Recently he produced, directed and edited a film for the National Disability Insurance Scheme, and he himself is only one example of how technology is breaking through the limitations of even the most severe disabilities.

If you follow 3D printing news at all, you’re likely well acquainted with the incredible ways the technology can change the lives of people with disabilities. We cover 3D printed prosthetic devices frequently, and while they never fail to amaze, they barely scratch the surface of the possibilities in 3D printed assistive technology. Much of that technology benefits people like Hills who have very little motor function, and some of the most ingenious designs come from members of the public thanks to crowdsourcing initiatives like MakerBot’s Assistive Technology Challenge. 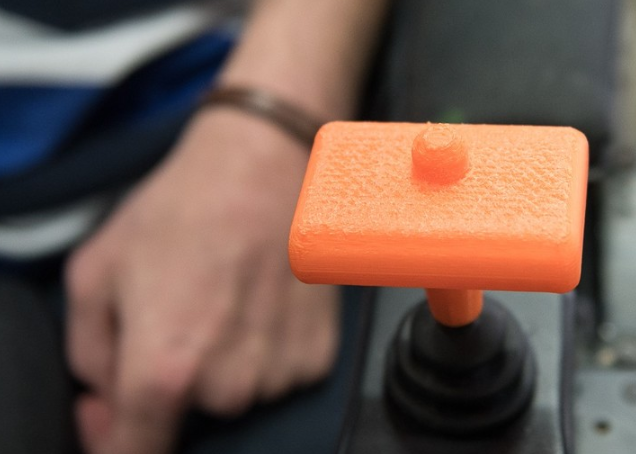 The workers also printed similar covers for wheelchair control joysticks, meaning that multiple individuals can easily use the same wheelchair simply by changing the grip covers. Wheelchair controls are an excellent, and  increasingly common, example of how 3D printing can easily and cheaply circumvent challenges.

Melissa Fuller founded AbilityMate, an open source community that links people in need with designers and makers who create customizable assistive devices. Wheelchair joysticks are some of the most common requests, she said, as even the most expensive wheelchairs often come with joysticks that are difficult to operate due to the nature of certain disabilities. She gave an example of a woman with cerebral palsy whose $35,000 wheelchair came with a joystick she couldn’t operate.

The impact of ankle-foot orthoses on balance in older adults: A scoping re...
The rest of the story - helmet treatment
First look at how children with cerebral palsy develop language skills
Paralympics haven’t decreased barriers to physical activity for most peopl...
Home schooling during pandemic a daunting challenge for families of kids w...
Class of 2017: Neuroscience grad hopes his fascination with the brain lead...