Clinical research led by Stanford University investigators has demonstrated that a brain-to-computer hookup can enable people with paralysis to type via direct brain control at the highest speeds and accuracy levels reported to date.

The report [1] involved three study participants with severe limb weakness — two from amyotrophic lateral sclerosis, also called Lou Gehrig’s disease, and one from a spinal cord injury. They each had one or two baby-aspirin-sized electrode arrays placed in their brains to record signals from the motor cortex, a region controlling muscle movement. These signals were transmitted to a computer via a cable and translated by algorithms into point-and-click commands guiding a cursor to characters on an onscreen keyboard.

Each participant, after minimal training, mastered the technique sufficiently to outperform the results of any previous test of brain-computer interfaces, or BCIs, for enhancing communication by people with similarly impaired movement. Notably, the study participants achieved these typing rates without the use of automatic word-completion assistance common in electronic keyboarding applications nowadays, which likely would have boosted their performance.

One participant, Dennis Degray of Menlo Park, California, was able to type 39 correct characters per minute, equivalent to about eight words per minute.

This point-and-click approach could be applied to a variety of computing devices, including smartphones and tablets, without substantial modifications, the Stanford researchers said.

“Our study’s success marks a major milestone on the road to improving quality of life for people with paralysis,” said Jaimie Henderson MD, professor of neurosurgery, who performed two of the three device-implantation procedures at Stanford Hospital. The third took place at Massachusetts General Hospital. 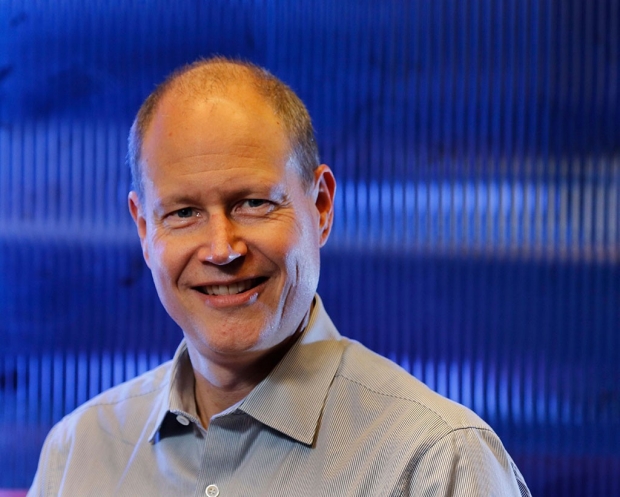 Neurosurgeon Jaimie Henderson has been collaborating with Shenoy on developing a brain-computer interface since 2004, and implanted the experimental devices in two patients as part of a clinical trial. Paul Sakuma

Henderson and Krishna Shenoy PhD, professor of electrical engineering, are co-senior authors of the study, which was published online Feb. 21 in eLife. The lead authors are former postdoctoral scholar Chethan Pandarinath, PhD, and postdoctoral scholar Paul Nuyujukian MD PhD, both of whom spent well over two years working full time on the project at Stanford.

“This study reports the highest speed and accuracy, by a factor of three, over what’s been shown before,” said Shenoy, a Howard Hughes Medical Institute investigator who’s been pursuing BCI development for 15 years and working with Henderson since 2009. “We’re approaching the speed at which you can type text on your cellphone.”

“The performance is really exciting,” said Pandarinath, who now has a joint appointment at Emory University and the Georgia Institute of Technology as an assistant professor of biomedical engineering. “We’re achieving communication rates that many people with arm and hand paralysis would find useful. That’s a critical step for making devices that could be suitable for real-world use.” 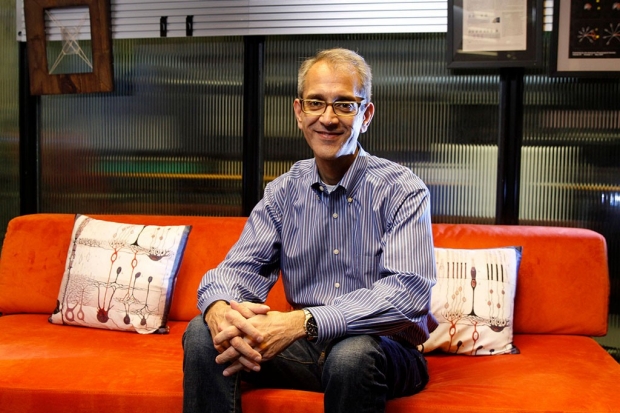 Shenoy’s lab pioneered the algorithms used to decode the complex volleys of electrical signals fired by nerve cells in the motor cortex, the brain’s command center for movement, and convert them in real time into actions ordinarily executed by spinal cord and muscles.

“These high-performing BCI algorithms’ use in human clinical trials demonstrates the potential for this class of technology to restore communication to people with paralysis,” said Nuyujukian.

Millions of people with paralysis reside in the United States. Sometimes their paralysis comes gradually, as occurs in ALS. Sometimes it arrives suddenly, as in Degray’s case.

Now 64, Degray became quadriplegic on Oct. 10, 2007, when he fell and sustained a life-changing spinal-cord injury. “I was taking out the trash in the rain,” he said. Holding the garbage in one hand and the recycling in the other, he slipped on the grass and landed on his chin. The impact spared his brain but severely injured his spine, cutting off all communication between his brain and musculature from the head down.

“I’ve got nothing going on below the collarbones,” he said.

Degray received two device implants at Henderson’s hands in August 2016. In several ensuing research sessions, he and the other two study participants, who underwent similar surgeries, were encouraged to attempt or visualize patterns of desired arm, hand and finger movements. Resulting neural signals from the motor cortex were electronically extracted by the embedded recording devices, transmitted to a computer and translated by Shenoy’s algorithms into commands directing a cursor on an onscreen keyboard to participant-specified characters.

The researchers gauged the speeds at which the patients were able to correctly copy phrases and sentences — for example, “The quick brown fox jumped over the lazy dog.” Average rates were 7.8 words per minute for Degray and 6.3 and 2.7 words per minute, respectively, for the other two participants.

Users reported it felt “more natural” than using a mouse. Two participants in the BrainGate clinical trial directly control a tablet computer through a brain-computer interface to chat with each other online. BrainGate Collaboration in IEEE Spectrum 21 Nov 2018

The investigational system used in the study, an intracortical brain-computer interface called the BrainGate Neural Interface System, [CAUTION: Investigational Device. Limited by Federal Law to Investigational Use]. represents the newest generation of BCIs. Previous generations picked up signals first via electrical leads placed on the scalp, then by being surgically positioned at the brain’s surface beneath the skull.

An intra-cortical BCI uses a tiny silicon chip, just over one-sixth of an inch square, from which protrude 100 electrodes that penetrate the brain to about the thickness of a quarter and tap into the electrical activity of individual nerve cells in the motor cortex.

This is like one of the coolest video games I’ve ever gotten to play with.

Henderson likened the resulting improved resolution of neural sensing, compared with that of older-generation BCIs, to that of handing out applause meters to individual members of a studio audience rather than just stationing them on the ceiling, “so you can tell just how hard and how fast each person in the audience is clapping.”

Shenoy said the day will come — closer to five than 10 years from now, he predicted —when a self-calibrating, fully implanted wireless system can be used without caregiver assistance, has no cosmetic impact and can be used around the clock.

“I don’t see any insurmountable challenges.” he said. “We know the steps we have to take to get there.”

Degray, who continues to participate actively in the research, knew how to type before his accident but was no expert at it. He described his newly revealed prowess in the language of a video game aficionado.

“This is like one of the coolest video games I’ve ever gotten to play with,” he said. “And I don’t even have to put a quarter in it.”

The study’s results are the culmination of a long-running collaboration between Henderson and Shenoy and a multi-institutional consortium called BrainGate. Leigh Hochberg MD PhD, a neurologist and neuroscientist at Massachusetts General Hospital, Brown University and the VA Rehabilitation Research and Development Center for Neurorestoration and Neurotechnology in Providence, Rhode Island, directs the pilot clinical trial of the BrainGate system and is a study co-author.

“This incredible collaboration continues to break new ground in developing powerful, intuitive, flexible neural interfaces that we all hope will one day restore communication, mobility and independence for people with neurologic disease or injury,” said Hochberg.

“I have no function below my collar bones,” says John Gardener*, who damaged his spinal cord in a fall 10 years ago. “I rely on devices,” he says.

Gardener, who lives in California, is unable to move any of his limbs. Although he is able to communicate by speaking, he is not able to use voice commands to do everything he wants to do on a computer, such as move a cursor or respond to emails. Instead, he uses an eye-tracking device to do these things. Gardener was keen to volunteer for a trial of a device that would make these tasks easier for him and others in similar situations. The device, developed by a collaboration called “Braingate” together with researchers at Stanford University, uses an implant to record brain activity. This then feeds a signal, through a wire, to a computer (see main story).

Gardener had the implant surgically placed onto his brain under anaesthetic, and felt no pain afterwards. The most testing part of the procedure was having the mount for the external components of the device screwed into his skull. “It was the sound, and the feeling of vibration, like someone was using a power drill,” he says.

Once Gardener had recovered from surgery, the team was able to train the device to recognise patterns of brain activity that appeared when Gardener thought about moving his limbs. This activity could then be used to direct a cursor on a screen.

Gardener’s first task was to move the cursor to a specific target. “When I first tried, the cursor wiggled and fell to the bottom of the screen,” he says.

Gardener learned to control the cursor by imagining his hand on top of a ball, rolling it one way or another. He quickly got the hang of it. When faced with a keyboard he was able to move the cursor across the screen to the desired letter and select it by thinking about clicking his fingers.

At the end of the first training session, Gardener was able to type on average 8.5 words per minute. “It’s at least five times as fast as the system I’ve been using,” he says.

His existing system is called a “SmartNav” – essentially a pair of glasses that monitors his head movements to allow him to control the movement of a cursor on a screen. But sending emails isn’t easy, says Gardener. “A short 20-word email takes 15 minutes,” he says.

At the moment, his brain implant is only being used for research. Before such devices hit the general market, they will have to be cordless, and be less labour intensive to set up.

The first of such devices will probably help people with paralysis to communicate, but others might help them control robotic limbs, or aspects of their home environment.

*Name has been changed

In search of a better backrest
Maximum Healthcare and Mobility in Calgary
AISH recipients slam changes, saying more is needed
Living in a greener neighbourhood could lower your risk of death
Got knee pain? The best tool for evaluating knee pain among middle-aged pa...
Pandemic upends the lives of people with disabilities — and of their careg...