Underwater vehicles, robot hands, hybrid rocket motors… it all sounds like something out of a sci-fi movie, but these are all devices crafted by students at the Schulich School of Engineering School at the University of Calgary. Almost 120 projects were unveiled at this year’s Capstone Design Fair, an annual showcase where fourth year students at the Schulich School of Engineering demonstrated a variety of projects they spent the year perfecting.

Engineering students learn by doing, resulting in a senior year spent taking their original ideas from concept to design and prototype.

Here are five projects we thought were both functional, and just plain cool.

The name sounds complicated, but it’s pretty simple once you see this radiation bed in action.

Coordinating with the Tom Baker Cancer Centre, four engineering students designed a bed with an acrylic sheet that can sink to fewer than nine inches off the ground, and hold up to 2,200 pounds.

Allen said traditionally, cancer patients needing irradiation treatment would be laid in a box and packed with 300 pounds of yellow, packaged jelly before these beds came along. University of Calgary engineering students Michael Cheung, left, Erica Floreani, Jiannan He, Nicholas Jung and Gurinder Lottay designed a prototype that gives children with cerebral palsy the freedom to ride a bike with parents steering from behind to keep them safe. Pier Moreno Silvestri, Postmedia Network

Groups of bystanders crowded around this booth, craning their necks to get a look at the most incredible projects at this year’s fair: a functional prosthetic hand.

This hand, which can be put together for just $25, can be assembled by almost anyone using a few simple components: a bike pump, pop bottle, sugar and a balloon.

What? That’s what we said. The bike pump acting as a vacuum, you slip your limb in the bottle and use the balloon as a gripper. This project could be revolutionary for third-world amputees lacking access to pricey prosthetics.

There are electric bikes, mountain bikes, recumbent bikes, but what about bikes for children with cerebral palsy?

Mike He was one of five students who helped design a specialized steering contraption for a bike program run through the Calgary Cerebral Palsy Association. Bikes designed for kids with cerebral palsy exist, but He said they can cost up to $6,000, and are quickly outgrown.

“Our design is adjustable to fit different bikes of different sizes,” he said. “You can use the parts over and over again, and the kids can enjoy the true feeling of riding a bike.”

Have you ever heard of a robot making… a robot?

U of C students have taken 3D printing to a whole new level with one team facilitating the “printing” of two, individual life-size legs for a robot. While the legs were inanimate (though they might not be if you added a torso and arms), this project is a stepping-stone to another realm of engineering.

Combined with another project designed by four other students who developed a visual system of a life-size robot companion for children in medical environments, there’s no telling what’s next — 3D printing humans?

We’ve seen highly developed exploration rovers doing work in inhospitable climates like Mars, but there are places on Earth that have claimed the lives of many either because of climate, accessibility or unexpected dangers.

Theo Gibb and three other students were the brains (literally) behind the mind of an unmanned ground vehicle, which he said could be used for arctic research, landmine removal or mapping out areas inaccessible to humans.

“They use robots for minefield removal already,” he said. “You could use something like this to inspect dangerous areas you don’t want to send people into.” 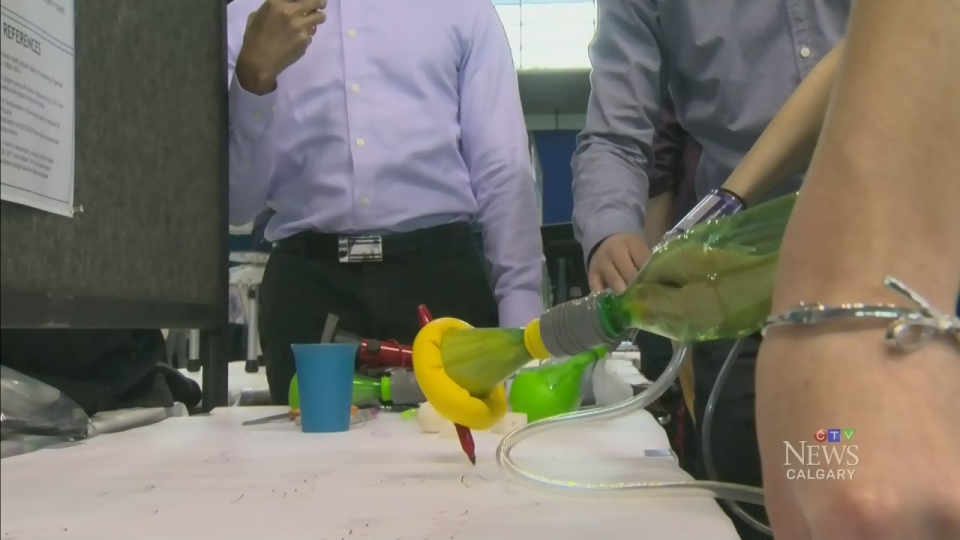 The pneumatic device may consist of a humble bicycle pump, a hacked-up pop bottle, a balloon full of sugar. And yes, it is held together with duct tape. But the project could one day change the lives of amputees across the developing world. CTV News

The original Canadarm cost about $100 million when it was built as a joint venture between the Canadian and U.S. governments in the mid-1970s and early 1980s. Today, a team from the University of Calgary is unveiling another ambitious arm-based project – albeit for a fraction of the development cost.

They’ve dubbed it the Calgary Arm, and it cost just 25 bucks.

The pneumatic device may consist of a humble bicycle pump, a hacked-up pop bottle, a balloon full of sugar. And yes, it is held together with duct tape. But the project could one day change the lives of amputees across the developing world.

“The objects that we bought, you should be able to buy anywhere. If it’s not bought, it was out of our recycling bins,” engineering student Tyler Anker told CTV News on Monday.

The Calgary Arm is a prosthetic capable of picking up small objects. The materials may be somewhat crude, but the device offers enough dexterity for the user to grasp and release virtually anything you would with a human hand, and even pick up a pen and write.

“The concept and the product look simple, but there was a bit of math that went into it,” said mechanical engineering student Shalese Baxandall.

The sugar-filled balloon serves as the Calgary Arm’s “hand.” It uses the suction power of the foot-operated bike pump, which has been hooked up backwards, to expand and contract. The pop bottle functions as a sleeve.

Unlike some of the groups showing off their final projects, team Calgary Arm isn’t looking to patent their invention or land a lucrative partnership a with top medical science firm. They’re giving away the blueprints for free, and even showing people how to make one on their own through a tutorial video.

“Here in Canada it might not be that feasible to use a $25 prosthetic, but in other countries where people can’t afford (expensive devices), and where people struggle with amputations, we thing it could be pretty useful,” said Anker.

“If it helps the world, I feel good about that,” added Baxandall.