Patients can track symptoms, share data right from their phone.

For some diseases, a simple blood test is all that’s needed to estimate severity or confirm a diagnosis. Not so for multiple sclerosis. With an iPhone app called MS Mosaic, people living with MS can track how they’re doing between doctor’s visits, uncover patterns and share their information with their healthcare team. Duke University

Durham NC — No single lab test can tell doctors what type of MS a patient has, nor whether it’s responding to treatment. But by better tracking patients’ symptoms and potential triggers with help from a new iPhone app, Duke University researchers hope to take some of the guesswork out of managing MS and pave the way to more personalized and timely treatment.

More than 400,000 Americans and 2.3 million people worldwide suffer from multiple sclerosis, an autoimmune disease that affects the central nervous system. The disease causes the immune system to attack myelin, the protective sheath surrounding the nerve fibers in the brain and spinal cord.

Like tattered insulation on an electrical wire that causes a short circuit, the damage to the myelin causes scarring that blocks communication between the brain and the rest of the body.

People living with MS can experience vision problems, numbness, muscle weakness, difficulty concentrating and other symptoms that vary from person to person and can come and go, often without warning.

While there’s no cure for MS, many medications are available to slow the course of the disease and speed recovery from MS attacks. But patients and doctors don’t have a surefire way of knowing what triggered a given attack and choosing medications accordingly.

“MS is difficult to manage because so many things can influence your day-to-day experience,” said neurologist Lee Hartsell, MD, MPH, assistant professor of neurology in the Duke University School of Medicine. “Genetics, stress, infections, even the outside temperature can have a direct effect on your symptoms.”

Take fatigue, Hartsell said. A patient may think a sudden bout of exhaustion is caused by their MS, when in fact it’s a side effect of a medication they’re taking or because they’re not getting good sleep.

What’s more, each person reacts differently to the available drugs. But treatment decisions are based on the typical treatment response for MS patients on average, and often it’s not clear whether something is working for a given patient until after a year or more.

It was challenges like these that gave Hartsell and Duke assistant professor of statistical science Katherine Heller the idea for MS Mosaic, an iPhone app that collects daily and weekly information on patients to more closely monitor MS.

“We want to see how things are going even when you’re not in front of a doctor,” Heller said. 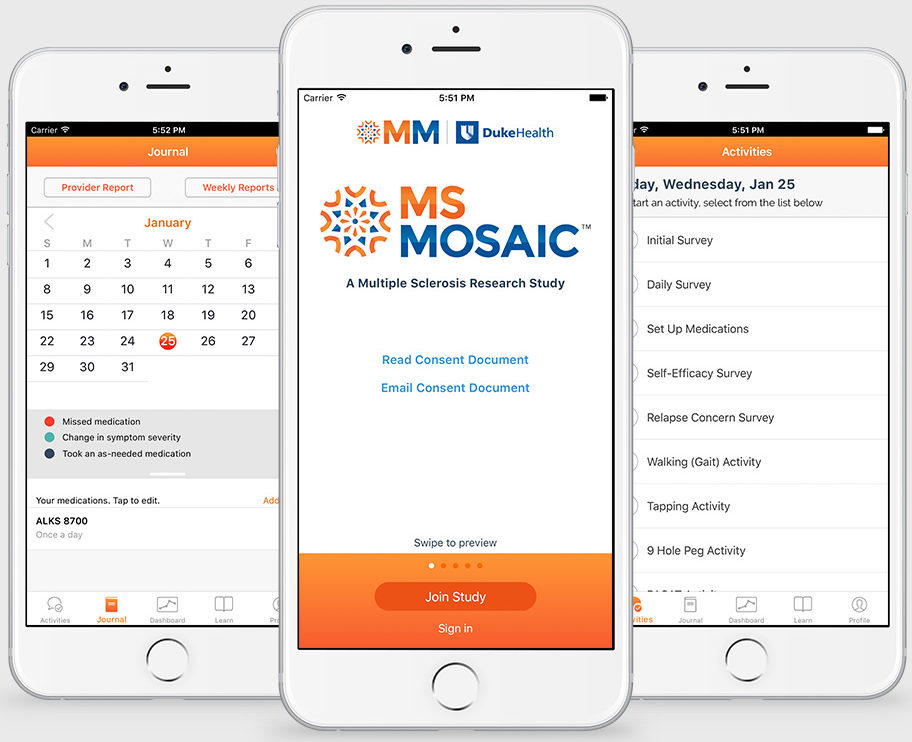 Duke University’s MS Mosaic is a study that seeks to better understand multiple sclerosis from daily experiences. MS Mosaic is a unique iPhone app that uses a mix of surveys and tasks that use phone sensors or wearable devices in order to collect and track your health and symptoms of MS. The insights gained from this study may help customize symptom management and perhaps eventually influence all MS care. MS Mosaic partner Thread Research.

The free app is available through  Apple App Store and on the study website at msmosaic.org.

Like other ResearchKit apps, MS Mosaic starts with a series of screens to explain the purpose of the study, determine eligibility and request permission to share the user’s data.

A daily survey prompts participants to record any changes in their symptoms or missed medications since the previous day.

Once a week, the app also guides users through various performance tests. These include a finger tapping test to gauge hand coordination and fatigue, a walking speed test, and a timed addition test to assess memory and attention.

MS Mosaic also works with Apple’s HealthKit to pull in data collected by wearable fitness devices or the iPhone’s built-in sensors, such as steps taken or hours slept per day.

A weekly report lists any new symptoms that cropped up or old symptoms that got worse, with links to more information. With a tap, users can also send a report to their doctor summarizing trends since their last visit.

“It’s hard to summarize several months of your life during a 20-minute clinic visit,” Hartsell said. “Many patients aren’t sure what to tell the doctor and what’s OK leave out. The report is meant to be a springboard.”

The collected data will help researchers develop algorithms to determine what type of MS a patient has, when their symptoms are likely to act up, and whether their current treatment plan is working or if it’s time to switch to a new class of drugs.

The researchers hope to gather enough data to identify patterns of activities or medications that make some people feel better or worse.

They also hope to combine the app data with patients’ annual MRI scans and other lab results to better distinguish between MS attacks caused by new nerve damage — which may require drugs to bring down inflammation — and flare-ups triggered by something else.

“If we could accurately differentiate between the different kinds of relapses, we could significantly reduce patient exposure to unnecessary steroids,” Hartsell said.

Eventually researchers may be able to predict which treatments will work best for a given patient before they’re prescribed, or before the disease has progressed to the point where some therapies are no longer effective.

“We hope to finally get somewhere in customizing treatment for individual patients based on their data,” Hartsell said. “This app helps the patient, the clinician and the researcher, all at the same time.”