Today the company officially unveiled its plan to make iPhone owners’ medical records available at the touch of a button via its Health app. One recent feature allows patients like Garry James (right) to view their medical record from the Health app on their iPhone. Cedars-Sinai Medical Center photo in Fast Company

Though not entirely unexpected (rumors of Apple’s plans have been swirling for months), the announcement confirms that Apple’s ambitions in the healthcare space go far beyond simple fitness tracking.

The feature, which will be available to iPhone and Apple Watch owners once the iOS 11.3 update rolls out later this year, stands to completely change how people access and track their medical history and care.

Healthcare providers typically work with third-party vendors who maintain the software that enables hospitals and doctors’ offices to provide electronic health records to patients in the first place. For now, Apple has formed partnerships with three such companies in order to make it possible for their software to be integrated with Apple’s Health app.

Of the hospitals that work with those companies, 12 are taking part in the initial beta, including Johns Hopkins, Cedars-Sinai, and Oschner.

Beginning with the public beta, patients at those hospitals can opt-in to getting health records on their phones using the iPhone’s Health app. The process is relatively straightforward: after selecting one of the hospitals, you’ll be directed to an authorization page, and then to a login page where you’ll able to sign in using your existing credentials. 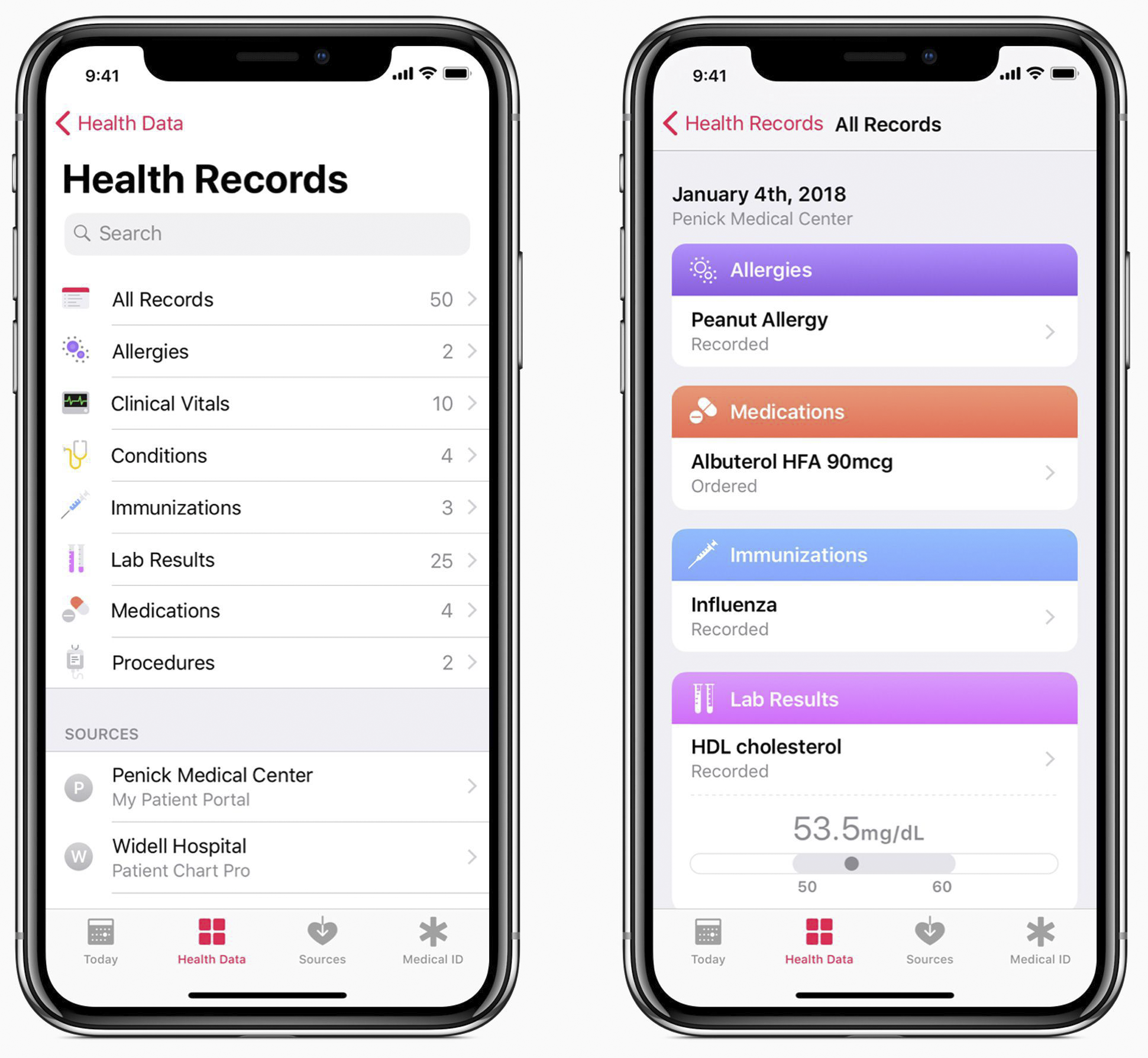 Once set up, the Health app essentially syncs with your existing online records, organizing all of the data into seven different categories: allergies, clinical visits, conditions, immunizations, lab results, medications, and procedures.

Just as with all the other data on your iPhone, medical records are encrypted and not stored in Apple’s cloud unless you opt in via iCloud. Records are also protected with a passcode, TouchID or Face ID. That may sound straightforward enough, but the program could have far-reaching implications for the medical industry. The availability and consistency of medical records has long been a pain point throughout the healthcare system. Having a way to easily view all of your data in one place on your phone would radically change how many people access and think about their medical data.

Outside of accessibility, a big part of Apple’s pitch here is that by simplifying records, it’s also able to help make medical data easier to understand. So not only are you able to quickly reference, say, your latest lab results, but the Health app is able to contextualize that information to help you make sense of it.

Instead of simply seeing your latest cholesterol numbers, for example, you’ll see where your numbers fall on the wider spectrum. That type of information may already be surfaced in some online records, but Apple is hoping to make this type of data more consistent for everyone.

One of the downsides of all this is that unless you’re a patient at one of the first 12 hospitals Apple is working with, it will likely be some time before you can take part in Apple’s program yourself.

Though the company hopes to eventually streamline the on-boarding process for hospitals, the reality is that the healthcare system is extremely fragmented and notoriously slow. Mass adoption is not going to happen overnight. And while Apple has already convinced a number of big-name hospitals to sign on, it could take much longer for smaller institutions to come onboard.

Even so, Apple clearly believes its well-positioned to make a big difference in the space. “We view the future as consumers owning their own health data,” Apple COO Jeff Williams told CNBC.