When Lama Nachman met Stephen Hawking in 2011, she was given one clear instruction: do not change his voice. Lama Nachman, right, worked with Stephen Hawking on upgrading the systems he used to communicate. The hardware for his voice was so old that it was in danger of failing at any time. Intel

Her task, leading a team of researchers and engineers, was to work with Hawking on upgrading the computer system which helped him to communicate.

“Initially I was in awe of the fact that I’m talking to one of the most brilliant people on Earth,” Nachman, director of the anticipatory computing lab at Intel Corporation, tells The Current’s guest host Laura Lynch.

“You realize all the challenges that he goes through… and how much he really has to work hard every single day, to just get his thoughts out to the world.”

Hawking, who died last week after living much of his life with a motor neuron disease, lost his voice after a tracheotomy in 1985.

A year later, he adopted the computer system that would give him his unmistakable voice.

His condition, and the technology he used to overcome it, changed over the decades, and by 2011 the technology that assisted him was in need of an overhaul.

Initially, Nachman and her team were asked to improve the speed at which he could communicate, but that was just the start.

The hardware that supported his voice was so old there were fears it might fail at any time.

Newer computerized voices had become available in the intervening decades, but Hawking wanted to keep the one he had.

He strongly felt the voice he gained in 1986 was his own — so much so that he had it copyrighted.

As they developed the new software, she says “he was actually able to figure out if that voice did not actually match exactly the hardware voice that he had.”

“In everything that we’ve developed, that was a big no-no,” Nachman says. “We could not change anything about the software voice.”

Developing assistive technology has to be tailored very specifically to an individual’s needs.

But Hawking asked the team to make sure the work they did for him could be used by others.

“One of the things that Stephen was very clear about was that he wanted that technology to enable others,” she says.

“He wanted us to open-source the technology.”

Nachman’s team developed a tool kit that could meet Hawking’s needs, but also be easily reconfigured, so other users could trigger devices in different ways, or have a different user interface, or a different output voice.

The response has been strong, she says, including from developers who wanted to create versions in different languages. The kit is now available in French, Spanish and Portuguese.

“That’s kind of the power of the open-source community, because they can really bring that to the people,” she says. Nachman’s work with Hawking has increased access to technology for people with disabilities, but finding and affording the right technology is still difficult for many people.

In Canada, it’s not a level playing field, says Gary Birch, as funding can vary from province to province.

Birch is an electrical engineer and the executive director of the Neil Squire Society, a national not-for-profit whose aim is to empower Canadians with disabilities through the use of technology.

This is even before the cost of buying the devices, he points out, or the necessary cost of having them tailored to individual needs.

“Although I have some use of my arms I really don’t have any use of my hands or my fingers,” he says, “so I’ve always had some challenges to interface with technology myself.” 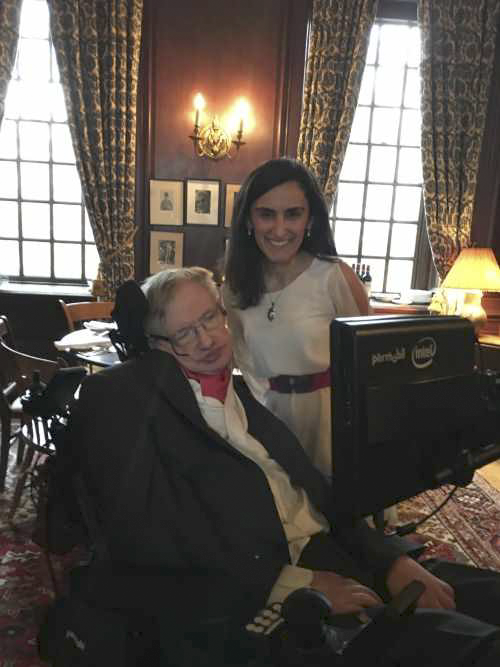 When he began to work in the field of assistive technology in the 1980s, he hoped to create devices that could be directly controlled by brainwaves.

While we’re not seeing devices like this in every home just yet, Birch says it’s still a dream worth pursuing — if companies can be convinced to invest.

“Typically when you’re developing these technologies, the market for a particular solution could be very small — so small it’s hard to get the cost down,” he says.

It can be frustrating, he says, to see people walking around with smartphones — a very complicated piece of technology that is relatively affordable — while simpler, assistive devices remain prohibitively expensive for people who really need them.

Solving that problem, he says, will introduce people with disabilities to a world of opportunity. He thinks companies should see it as an investment in people.

“It’s not a cost, because what you’re doing is you’re empowering these individuals to take part in our society, whether it be in the workforce or other ways.”

Cartilage degeneration algorithm predicts progression of osteoarthritis
Low wages are driving a shortage of care providers – elders and the disabl...
Telehealth services increasingly popular with consumers and insurers
Prevalence of idiopathic toe-walking in children from birth to 10 years of...
Robotic walker may help young people be more social and physically fit
Habitat for Humanity dedicates homes to families of special needs kids