Vince Ross suffered a car crash at the age of 22, becoming a wheelchair user.

He explains to the BBC’s Ellis Palmer how his Paralympic experience led him to create a successful wheelchair-making business in Liverpool. 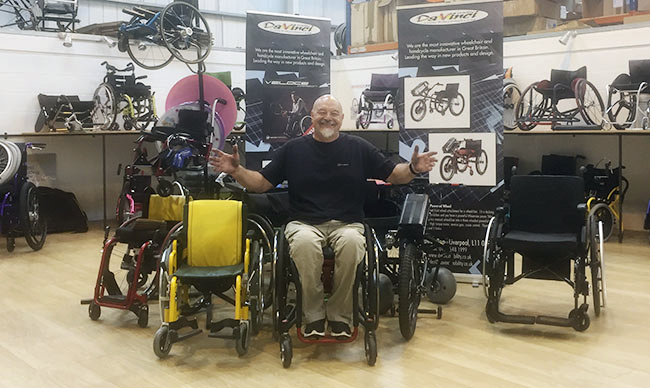 While millions of eyes are on the amazing Paralympians in Rio, one man in Liverpool is absolutely focused on the wheelchairs they are using!

“Ever since my injury more than 40 years ago I have concentrated on improving the design and functionality of wheelchairs,” says Vin, who co-runs the Gillmoss-based company, Da Vinci Mobility.

“Pushing a wheelchair is hard work, and over the years can put enormous stress on joints that just weren’t made for this. That’s what keeps driving me – trying to make life as easy as possible for wheelchair users.”

An engineer with English Electric, he was a passenger in a Bond three-wheeler when it went out of control on Queens Drive, Liverpool.

Five months later he left Southport’s spinal injuries unit – in a wheelchair, paralysed from the waist.

“Yes, it was a catastrophic, life-changing experience,” says Vin, “and there were moments of great despair. But it wasn’t the end of the world. It just needed a few readjustments, mentally and physically.”

While lying on his back for seven weeks Vin saw lots of other paralysed patients visiting the unit.

“It was very clear to me that the people who were healthier, those who lived longer, were those with positive attitudes and those involved in sport.”

English Electric provided him with a new job as a jig and tool design draughtsman, and the council gave them a new home – with lift – in Norris Green.

Amazingly, within just two years he made it into the GB wheelchair basketball and fencing teams at the Toronto Paralympics – and returned home with a bronze medal in foil.

“It was great, but we could have done so much better had we had the kind of wheelchairs the Americans used.

“All we had was bog-standard NHS chairs that we tried to adapt. The Americans had aluminium tubing, rigid frames. They were so much better.”

Two weeks later Vin made his own sports chair – half the weight of his original model – and by the time the Arnhem Paralympics came around half of the GB basketball squad were also using his chairs.

Back in 1980 there were no mobility shops in the UK.

“You couldn’t just go and buy a wheelchair. You got them from NHS centres. They were very basic, and you had no choice.”
Vin’s response was to quit his job and start making chairs from the garage of his new Aintree home.

A few years later he helped a local charity build their own chairs, and to boost the charity’s funds he completed a John O’Groats-Land’s End wheelchair push in just 14 days, followed by another marathon across Japan.

“It’s all been fantastic. Naturally, there have been a few lows along the way, but and I couldn’t be happier the way things are turning out.”

Vin and friend, John Ingram, set up the new company Da Vinci in 2001 and quickly became one of the UK’s most respected wheelchair makers.

Following John’s retirement earlier this year that team now comprises Vin and his three partners – wife, Mary, brother and sister-in-laws, Steve and Ann Curran – and a staff of 15, half who have a disability.

Source All Together NOW!