Canadian researchers developed an at-home virtual rehabilitation system for people with weakness on one side of their body, then tested it in a two-month-long cerebral palsy related clinical trial – Functional Engagement in Assisted Therapy Through Exercise Robotics (FEATHERS).

The study was recently published in the Games for Health Journal. The team talked with those who tried the motion capture-based system, their physical therapists, and engineers involved in the project to come up with conclusions on how well it worked, how much participants used it, and what could be done to improve it.

They concluded that technical problems dampened participants’ and therapists’ enthusiasm for the system and prevented participants from sticking with it. They also concluded that ads that popped up during the Facebook video games that were at the heart of the system hurt the rehabilitation effort’s chance of success. Still another conclusion was that the video game fare needs to be adjusted over time to keep the rehabilitation challenging.

Those who tested the tool included seven adults and three adolescents with hemiparesis, a condition that involves weakness on the entire length of one side of the body. The condition usually stems from cerebral palsy, a brain injury or stroke.

Researchers assembled a team of engineers, therapists and others to help create the system.

“Our objective was to identify factors affecting the use of the system to inform future virtual rehabilitation research, based on feedback from participants with hemiparesis secondary to stroke, brain injury, and cerebral palsy, as well as research team therapists and engineers,” the team wrote.

They named the system FEATHERS, for Functional Engagement in Assisted Therapy through Therapy Robotics. It consists of a PlayStation Eye camera that’s similar to a webcam, two PlayStation Move controllers, and a computer running Microsoft Windows. 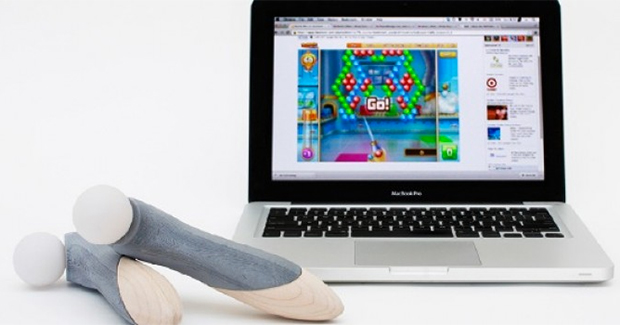 An earlier version of the FEATHERS bimanual controllers (above), which use a laptop to play online games, was updated with better button arrangement before in-home testing began with patients in October. The controllers use electronic components similar to a commercial Play Station Move controller, with a completely redesigned shell. University of British Columbia

Once a week the participants called the researchers to report on their experience with the system, including how much they were using it. This communication gave the team a grasp of how confident the participants felt about using the system and how motivated they were to keep using it their treatment.

Participants’ use of the system depended on three factors, participants decided. One was technology. This included the system’s hardware and software designs, the characteristics of the games and their therapy implications, and whether the system was easy to use.

Another factor was communication among those involved in the study, including their preferences and how effective communication was.

The third factor was participants’ and therapists’ ability to use the system. This covered such things as their familiarity with Facebook, the time it took for them to master the system, and the need for them to convey therapy-related information remotely.

One conclusion that researchers reached was that it was important to keep the participants’ rehabilitation work challenging, since most made progress from week to week. Another conclusion was that pop-up ads and in-game purchase requests were frustrating distractions that hurt the therapy process.

Still another conclusion was that technical problems prevented participants from sticking with the therapy, decreasing its chance of success.

The researchers also learned that participants preferred communicating by telephone rather than Facebook.

“More training in the use of the Facebook application and reinforcement of the available communication channels may help to improve access to support,” the team wrote.

Another conclusion was that therapists needed more help to become familiar with how the system operated and how it can be used in rehabilitation.

“Affording time for therapists to make clinical observations of participants throughout the intervention period through video conferencing or periodic home visits is also necessary to enhance clinical decision-making,” the researchers said.

Long waits for wheelchairs like having 'your legs taken away,' disability ...
A day in the life of four wheelers
We're not addicted to smartphones, we're addicted to social interaction
Future wearable device could tell how we power human movement
Phantom: the first ultrasound for the Mac
Researchers watch the knee degenerate and understand how osteoarthritis ma...