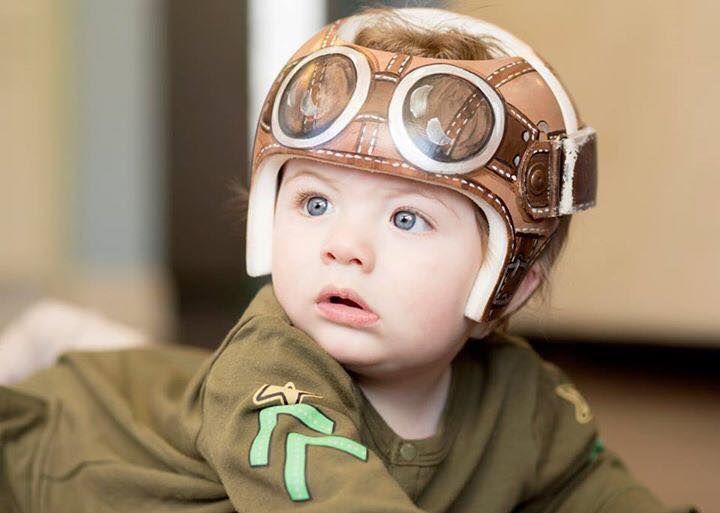 Plagiocephaly is defined as a malformation of the skull producing the appearance of a lopsided head (Thomas, 1997).[15] It can result from premature fusion of one or more cranial sutures (craniosynostosis) but is more commonly caused by external forces shaping the infant’s scull including intrauterine constraint and twinning; this is termed deformational plagiocephaly (Collett, Breiger, King, Cunningham & Speltz, 2005).[3] Positional plagiocephaly, according to Collett et al, is a term used to indicate external forces associated with the parent’s or caregiver’s positioning of the infant during sleep or other activities.

In February 1999, a joint statement, entitled Reducing the Risk of Sudden Infant Death Syndrome (SIDS) in Canada [2] was released by the Canadian Foundation for the Study of Infant Deaths, the Canadian Paediatric Society and the Canadian Institute for Child Health. The statement recommends that all healthy infants be placed supine (on their backs) to sleep.[2] This supine sleep position has been linked to an increase in positional plagiocephaly across Canada (Neufeld & Birkett, 2000).[12]

Clinic hours of operation ranged from one day a week to three days a week. I was unable to contact anyone in Quebec. Children who are diagnosed with plagiocephaly in Saskatchewan are referred to the Edmonton clinic. Patients from Northern British Columbia and the Northwest Territories are also referred to the Edmonton clinic. Although there is no clinic devoted to head shapes in Nova Scotia, New Brunswick, PEI and Newfoundland, infants are managed by physiotherapists as the need arises.

Local orthotists construct cranial remolding orthoses, commonly known as helmets for the Maritime provinces and Newfoundland. The clinic in Toronto closed after it was unable to keep up with the demand. As a result, the management of plagiocephaly in the Toronto area has been decentralized. Family physicians now work with infants identified has having plagiocephaly and their families. Referrals are made as required to orthotists at the Sick Kids hospital if a helmet is the indicated treatment.

Across Canada, professionals from various disciplines work in the area of plagiocephaly. Most often, nurses, physiotherapists, and occupational therapists manage and run the clinics identified above. The clinic in Calgary was the only clinic identified to have physicians directly involved in the day to day assessments of infants. The majority of the clinics were linked to local orthotists who create helmets as indicated for treatment. The clinic in Calgary outsources helmet manufacturing to Orthomerica, a U.S. based company.

Referral mechanisms vary across Canada ranging from family self-referrals to nurse referrals, to nurse or physician referrals. Clinic formats vary across Canada from consultations with individual families to group clinics in Vancouver where four families are seen at one time. Telehealth services are also provided out of the Edmonton clinic to areas where plagiocephaly expertise is minimal. Assessment of severity also differs across provinces. Assessment techniques identified include subjective observations, the use of various rating scales, manually collecting anthropometric measurements; and the use of Orthomerica STARscanner.

The plagiocephaly rating scale produced by Cranial Technologies, Inc., another U.S. based company appears to be utilized by the clinics in Calgary and Ottawa, while the clinic in Edmonton has adapted this scale and produced a ten-point scale of their own. The STARscanner uses 3D technology to acquire head shape data through lasers and cameras. Although the clinic in Winnipeg uses the scanner to obtain assessment data, the Calgary clinic uses the scanner after severity has been assessed by physicians to produce measurement data for helmet production. The resulting 3D model is employed by Orthomerica to manufacture the corresponding helmet. The traditional method for producing helmets is to cast the infant’s head.

Although effort has been made in the Canadian context to identify reliable and valid anthropometric methods for quantifying the severity of positional plagiocephaly (Mortenson & Steinbok, 2006),[10] a discussion with one of the authors suggests that these methods, in the end, were proven to be unreliable and other means of quantifying severity is much needed. Little work has been done to establish reliable and practical assessment tools for plagiocephaly. Argenta (2004) [1] presents a five-point classification scale that is easily reproducible, cost-effective and easily understood by both families and health care professionals. Spermon, Spermon-Marijnen and Scholten-Peeters (2008),[14] found Argenta’s five-point rating scale to be moderately reliable.

The minimal Canadian literature on plagiocephaly identifies an increase in the number of infants with plagiocephaly in the last decade (Neufeld & Birkett, 1999; [11] Neufeld & Birkett, 2000; [12] Dubé & Flake, 2003).[4] Although no information on the incidence of plagiocephaly in Canada was found in the literature, clinicians report a definite increase over the last few years in observed plagiocephaly, ranging from 100 referrals a year to over 1000 referrals a year. This range appears to be an underestimation in terms of incidence of plagiocephaly as many clinicians mentioned that they see very few of the infants identified in the community as having plagiocephaly. In many cases, only those recognized by public health nurses or family physicians as requiring intervention are referred to the clinics, where they exist.

However, it must be noted that a couple of clinicians recognize an ineffective referral mechanism since many infants (ranging from half to about three quarters of infants assessed) are identified as having very slight positional plagiocephaly where intervention in terms of helmetting would not be indicated. No surveillance system currently exists in Canada to capture data on plagiocephaly.

Some information on the incidence of plagiocephaly does exist, albeit not Canadian. In the United States general population, the incidence rate for positional plagiocephaly is more commonly cited as 1 in 300 live births (Argenta, 2004; [1] Kane, Mitchell, Craven & Marsh, 1996; [7] Liu et al, 2008) [8] although this may have been taken out of context or misinterpreted from the original source, as this figure was calculated in the 1970s, before the significant increase in plagiocephaly was observed (McGarry et al, 2008).[9] Peitsch, Keefer, LaBrie and Mulliken (2002) [13] report the incidence as 13% in singletons, while Glasgow, Siddiqi, Hoff and Young (2007) [5] assert that plagiocephaly is present in about 20% of all infants.

In the United States, disparities in diagnostic criteria and subjective classifications are noted as factors contributing to the lack of clarity in prevalence (and perhaps incidence) information currently available (Hutchison, Hutchison, Thompson & Mitchell, 2004).[6] The reported incidence varies widely and is frequently based on anecdotal evidence of the increase in the number of referrals to specialty clinics (Kane et al, 1996; [7] Glasgow, Siddiqi, Hoff & Young, 2007; [5] McGarry et al, 2008).[9]

I welcome any feedback or comments.