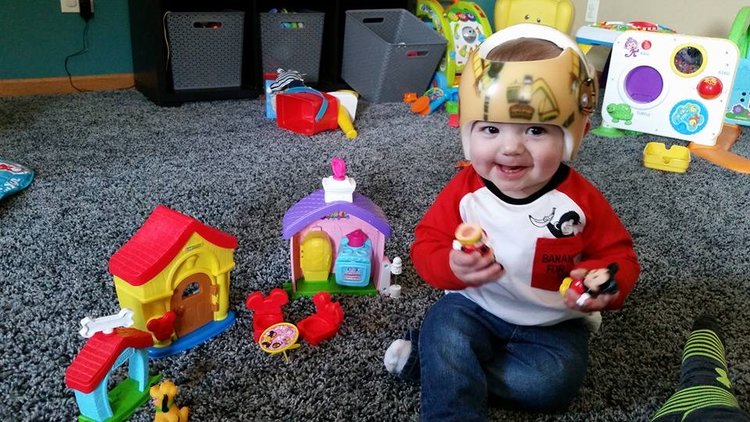 The goal of this study was to review the current literature on orthotic (helmet) therapy use in the treatment of deformational plagiocephaly.

Forty-two articles were found. There were no Class I studies, 7 Class II studies, 1 Class III study, and 13 Class IV studies. Cranial orthoses have been shown to be effective in treating deformational plagiocephaly. It continues to be debated as to whether the statistical significance of treatment with cranial orthoses compared with conservative therapies is clinically significant.

Children older than 12 months of age with deformational plagiocephaly may still benefit from orthotic therapy. The long-term effects of orthotic therapy are controversial.

There is a lack of Class I literature evidence supporting the use of helmet therapy in deformational plagiocephaly. There are controversies surrounding the use of orthotic therapy such as appropriate use, cost, use in older children, and long-term outcomes. Clinical indications for orthotic therapy need to be better defined with further research studies.

In 1992, the American Academy of Pediatrics Task Force recommended that infants be placed on their backs during sleep to reduce the risk of sudden infant death syndrome. Following this “Back to Sleep” recommendation, a significant drop in sudden infant death syndrome and an associated increase in the incidence of deformational plagiocephaly was noted,[1,21,28] and the use of cranial orthoses have been commonplace for the treatment of deformational plagiocephaly.

A cranial orthotic device is also referred to as a cranial helmet, cranial orthosis, or cranial band. These devices were first described in the scientific literature by Clarren et al. in 1979.[4] However, the idea of using artificial cranial deformation was conceived at least 30,000 years ago in ancient Peru,[2] where infant skulls were artificially shaped using external compression with fixed boards and pads [2] or ritual head wrapping.[25]

Modern-day cranial orthotic devices use that same principle. They are usually custom fit and molded to allow for growth in certain regions of the cranium and concomitant growth restriction in others. Most helmets apply passive restriction rather than active compression forces,[5,9,12,13] encouraging the infant’s malleable and rapidly expanding skull to grow into a desired configuration.

There are helmets that reportedly apply active molding forces to aid in the corrections, such as the Dynamic Orthotic Cranioplasty Band (Cranial Technologics, Inc.) and the pneumatic orthotic helmet described by Lee et al.[16] Some researchers argue that there is no true distinction between passive and active devices because the application of constant active pressure would easily exceed the ischemic tolerance of the overlying skin and lead to pressure ulceration.[36]

In the US, many cranial orthotic devices have been FDA regulated. There were currently 37 FDA-approved cranial orthoses listed on the FDA website [in 2013].

Of note, there has been some controversy surrounding the regulation of cranial orthoses. Many argue that FDA regulation helped standardize the industry,[19] while others argue that it has caused an increase in treatment-associated costs due to centralized production of the orthoses by larger companies.[32]

Cranial measurements have traditionally been obtained using anthropometric calipers. Recent technological advances such as photogrammetry [25,35] or 3D surface scanning with a laser [31,41] allow clinicians and researchers to use more accurate and efficient measurement.[41] The common anthropometric measurements used are explained in Table 2. 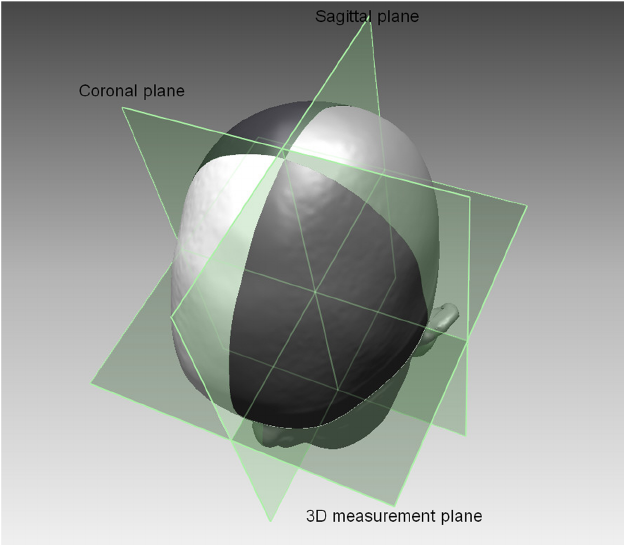 To judge the quality of the studies, the following classifications were used:

Forty-two articles were found using the search terms detailed above. Six articles were excluded because they were not directly related to cranial orthoses therapy in deformational plagiocephaly (n = 5), or involved nonhuman subjects (n = 1).

Of the remaining 36 papers,

Of the 21 primary research articles, there were

This review article focuses on the controversies that exist in the use of orthotic therapy in deformational plagiocephaly.

There is a lack of Class I evidence surrounding the use of helmet therapy in deformational plagiocephaly, as has been noted in previous review articles.[7,22,32] Nevertheless, the general consensus is that cranial orthoses are indeed as efficacious, if not more efficacious, in treating deformational plagiocephaly as compared with other more conservative treatments.[22,23,32]

Studies of helmet therapy often target patients who have already undergone unsuccessful osteopathy and/or physiotherapy as conservative measures.[5] This experience consequently introduces a selection bias whereby patients who have more severe deformational plagiocephaly are selected to take part in orthotic trials. It is uncertain whether orthotic therapy is warranted to treat infants with mild to moderate deformational plagiocephaly.[27]

Moss prescribed only neck-stretching exercises, positioning changes, and parental training to 66 infants with deformational plagiocephaly of mild to moderate severity, and found that the outcomes were comparable to infants who were treated by headbands in a previous study.[27] However, because the rate of correction is faster if infants start using the helmets earlier,[13,36] parents and providers alike may feel the pressure to begin infants with mild to moderate cases of deformational plagiocephaly on helmet therapy to prevent long-term cosmetic issues.

Similarly, Lipira et al. showed in his 2010 prospective cohort study that orthotic helmets yielded statistically superior reduction in overall head asymmetry compared with active repositioning via a novel 3D surface scanning technique.[17] However, this study also questioned the actual clinical significance of these statistically significant values in terms of quality of life, long-term outcomes, and parental satisfaction. Interestingly, another study that was aimed toward determining the optimal time to begin helmet therapy noted that some parents requested to withdraw prior to study aims being met, as they believed that the asymmetry was already corrected.[36]

Two studies have attempted to address the issue of clinical significance compared with statistical significance by also incorporating measurements of parental satisfaction into their research study. Both studies showed that subjective assessments are often discordant with objective measurements.[12,14] Katzel et al. measured both head asymmetry and improvement in ear position following helmet therapy.[12] He also asked parents to subjectively rate the improvements in both head asymmetry and ear position before and after therapy. Interestingly, the parents’ perceived improvement in ear position were similar in magnitude to the changes in head shape, despite less impressive changes in actual ear offset.

The issue of ear position was made even more interesting in a study by Kluba et al.[14] They observed that parents often noted ear shifts because they often have infants in their laps, and ear displacements were particularly apparent when observed from the vantage point of the parent from above. In their study, 40% of babies with deformational plagiocephaly without initial ear shift showed subsequent increased ear shift after being treated with cranial orthoses.

However, they found that subjective impressions of the babies’ ear positions as measured by ratings of medical doctors had a low concordance rate when compared with objective measures of ear shift.

The issue of clinical significance correlating with statistical significance is not a trivial one, as this could potentially affect the prevalence of use of cranial orthoses in deformational plagiocephaly. Ultimately, it is a cost-benefit analysis. These cranial orthotic devices cost anywhere from $1000 to $3500.[23]

Part of the high cost is secondary to the fact that the companies that make most devices pride themselves on custom-making the orthosis for the baby. However, Thompson et al. reported positive results in 2009 while using a generic-sized soft foam helmet that was fitted to patients by applying extra foam padding.[41] In the current atmosphere of burgeoning health care costs, this may potentially be more cost-effective for the health care system as a whole. 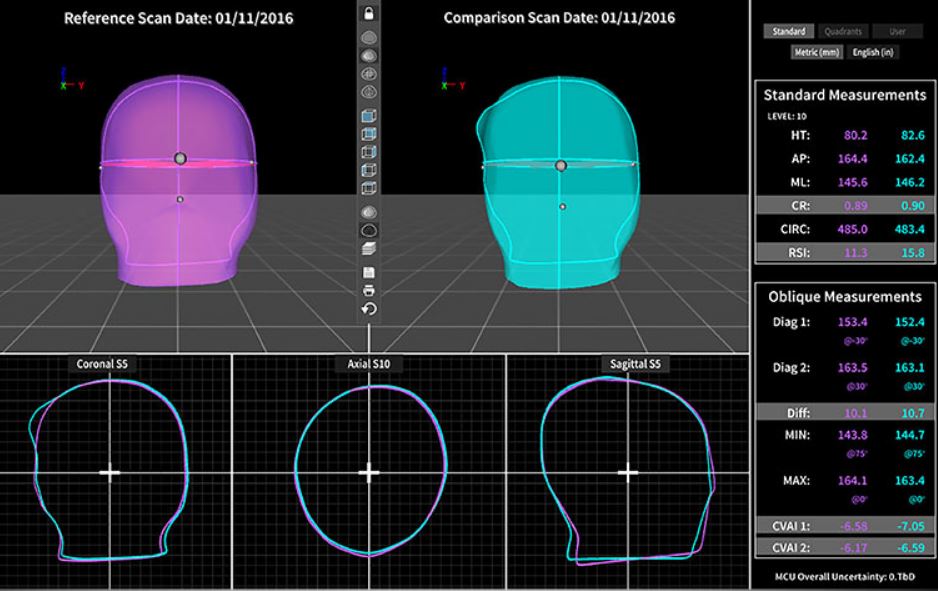 3D Measurement and Comparison Unit (MCU) software from Orthomerica allows an orthotist to provide concise and objective measurements of a child’s head shape. Whether treating conservatively, with a helmet or just monitoring for growth, the MCU will show comparative changes in growth and symmetry. OAPL Australia

Currently, most experts agree that starting cranial orthoses at 4 to 6 months of age is appropriate once more conservative measures have failed to correct the plagiocephaly. Kluba et al. in 2011 showed that patients who began helmet therapy prior to 6 months of age showed better relative and absolute reduction in head asymmetry when compared with patients who started after 6 months.[13] They found that patients older than 6 months on average continued to have an abnormal cranial vault index at 4.5% at last follow-up.

This suggests that a later starting age for helmet therapy may result in incomplete resolution of the asymmetry compared with beginning helmet therapy earlier. However, there have been published case reports in which infants older than 12 months of age were treated with dynamic orthotic cranioplasty with a reduction in cranial asymmetry.[20]

As such, it appears that cranial orthotic therapy continues to be warranted for older infants, but the rate of correction is slower and cranial asymmetry may not be absolutely corrected. In addition, many researchers have mentioned the logistical difficulty parents have in keeping their now more-active infant in a helmet for long periods of time per day, which may contribute toward the relatively slower rate of change documented in the literature.

Many review papers have acknowledged the lack of randomized control trials in the deformational plagiocephaly study.[7,22,32] However, van Wijk et al. are trying to correct this void in the literature with their current pragmatic randomized controlled trial nested in a cohort study.[43]

Participants are recruited at 2–4 months of age when first diagnosed with deformational plagiocephaly. At 5 months of age, they will be reassessed; if the plagiocephaly persists, parents are offered the opportunity to participate in a randomized controlled trial for helmet therapy compared with conservative treatment.

Parents who decline to participate will then be part of a non-randomized controlled trial and allowed to choose helmet or non-helmet therapy. Participants will be followed at set intervals until 24 months of age. Their outcome measures will include anthropometric measures and assessments of satisfaction in parents. Final results of this trial are expected in 2013.

In this study we demonstrate a lack of Class I literature evidence supporting the use of helmet therapy in deformational plagiocephaly and address the issues of appropriate use, cost, use in older children, and long-term outcomes. Hopefully, as new research studies address these issues, the clinical indications for helmet therapy in deformational plagiocephaly will be better defined.

Pandemic has brought unexpected joy for some families with autism, 'wake-u...
The power of music for special needs kids
Orthotic bracing in the treatment of Pectus carinatum
Knee extensor strength linked to improved physical function in patients wi...
When the barriers aren’t just physical
Orthopedic issue in kids? Skip these tests, experts say