Some of the most commonly used devices for infants — car seats, swings, bouncy seats, strollers, carriers or any device that inhibits a young child’s chance to roll, move, wiggle and kick — pose a risk for motor skill delay, plagiocephaly and/or torticollis, conditions that collectively, make up container baby syndrome, a clinical therapist told Healio Primary Care. 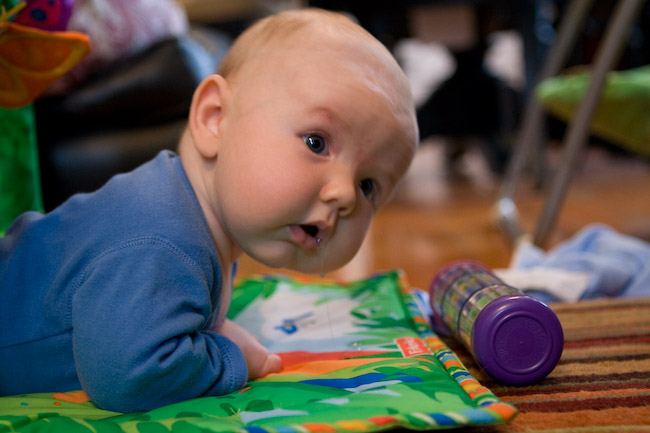 “Conversely, evidence indicates that ‘tummy time’ — placing infants on their stomach several times a day for short durations, working up to longer stints on their tummy — may stave off the syndrome,” Lori Grisez PT DPT of the clinical therapies department at Nationwide Children’s Hospital, also said.

Motor skill delay, plagiocephaly and/or torticollis varying degrees of prevalence, suggesting the link between the three conditions may not be well-known in the medical community.

“Since children with container baby syndrome are not using their muscles the way they’re supposed to, they’re not having an opportunity to practice all of these skills and use those muscles then they can have delays with their motor development. Sometimes, this means the children are delayed in learning how to roll over, sit up and eventually learn to stand,” Grisez said.

The AAP report titled Promoting Healthy Development provides an overview of what age normally developing children should acquire a variety of motor skills and information on commonly used developmental screening tools, such as the Ages and Stages Questionnaires (ASQ), the Parents’ Evaluation of Developmental Status (PEDStest) and the Survey of Well-being of Young Children (SWYC).

Grisez said plagiocephaly, another component of container baby syndrome, is often identified by flat spots on the back of a young child’s head. A study in Pediatrics suggested its impact may be more than cosmetic.

Brent R. Collett PhD, of the Center for Child Health, Behavior, and Development at the Seattle Research Institute wrote in Pediatrics that 187 school-aged children with moderate to severe positional plagiocephaly and/or brachycephaly deformation had lower cognitive and academic scores vs. 149 children that made up the control cohort.

“The findings do not necessarily imply that these associations are causal; rather, positional plagiocephaly and/or brachycephaly may serve as a marker of developmental risk,” Collett et al, cautioned as they discussed their findings.

The tell-tale sign of torticollis, the final element of container baby syndrome, is a twisted head and neck and a chin turned the opposite direction, according to the Journal of Child Neurology.

The start of the NIH Back to Sleep® Campaign in 1994, which encouraged babies be placed to sleep wholly on their backs to lower the occurrence of sudden infant death syndrome, or SIDS, seems to have coincided with increased awareness of torticollis and plagiocephaly.

While the Back to Sleep campaign is regarded as being largely successful, related recommendations on developing infants’ motor skills were overshadowed, resulting in an increase in reported cases of container baby syndrome, torticollis and plagiocephaly.

“The Back to Sleep campaign… was well adopted, with U.S. sources indicating that the percentage of infants placed on their back to sleep rose from 27% in 1994 to 74% in 2009, while the incidence of SIDS appeared to decrease,” Kristy Wittmeier PT PhD and Kathy Mulder PT, of the department of Pediatrics and Child Health, at the University of Manitoba wrote in Paediatrics & Child Health.

They added that a medical center received about 50 referrals each year for torticollis and/or plagiocephaly. But since once the sleep-related initiative began, referrals steadily increased, reaching 200 referrals annually in 2011 and leveling off at 307 in 2014.

Other researchers, such as Joyce Miller BSc DC PhD, of the Anglo-European College of Chiropractic, Bournemouth, UK and Sharon Vallone DC, owner of a business geared towards kids play and wellness in South Windsor, Connecticut, said Back to Sleep had the opposite impact on increasing the syndrome’s visibility.

“The AAP recognized that infants were missing out on important health motor [development] by 1996 and recommended to parents that they vary their infant’s head position in their sleep and give them some tummy time when awake, beginning at birth. Unfortunately, this advice was largely ignored,” they wrote in the Journal of Clinical Chiropractic Pediatrics.

“Despite that early warning about the need for tummy time, it has never really become common advice for health care professionals to disseminate. Parents have had to learn on their own of its many benefits and they sometimes have a fear of placing their baby on his/her front based on the 1992 information linking any position except supine with [sudden infant death syndrome],” Miller and Valone continued.

Wittmeier and Mulder wrote that it is crucial that primary care providers and other clinicians discuss container baby syndrome’s components with their expectant patients before delivery.

“It is imperative for prevention messaging to begin during pregnancy and be reinforced during the postpartum period… It would be ideal if parents/guardians could receive this information first from prenatal educators and prenatal care providers (midwives, obstetricians, family doctors). Postpartum nurses could reinforce this information before discharge from the hospital, and public health nurses could explain the importance of such prevention activities and demonstrate strategies in the home environment,” they wrote.

“Ideally, information pertaining to preventing the development of a head positional preference could [also] be delivered by family physicians and pediatricians who see infants during the first few weeks of life,” Wittmeier and Mulder added.

Grisez said there are no guidelines to steer decisions on how long infants can stay in car seats, swings, bouncy seats, strollers, infant carriers before the risk for container baby syndrome becomes significant, meaning parents need to use their best judgment on time limits.

“Primary care providers should tell patients’ parents that they need to limit the use of container equipment as much as possible and utilize it just for safety purposes. For example, if a child has a long car ride to get to the babysitter then maybe the next day you cut back on the time spent in a vehicle. Or if you kept the infant in a swing while you cooked dinner on a particular day, limit the swing time the next day,” Grisez said, adding that what is a suitable length of time for one child may not be appropriate for another.

“Clinicians should also ask parents at every infant visit during baby’s first year if the infant isn’t looking to both sides the same amount of time,” she said.

Noting that those signs run parallel to other behavioral conditions, she offered a few other physical signs that may indicate the child is impacted.

“Children who keep their head tilted to one side, or if one ear is positioned more in front of the other or more prominent on one side of the forehead as that pushes everything around on that one side from the flattening, are at risk for developing one of container baby syndrome’s components,” Grisez continued.

She added that primary care providers should ask infants’ parents questions such as ‘Does the child use one arm and leg more than the other?’ or ‘Are we seeing higher muscle tone in their arm and leg than what is normal for infants at that age?’ to further gauge a child’s risk.

Aliyah Mawji RN PhD, of the School of Nursing at Mount Royal University and co-authors wrote in Paediatrics & Child Health – reviewed the records of 440 infants at four community health centers ranging from 7 to 12 weeks in age and found babies born via vacuum/forceps assisted delivery and/or boys are at greater risk for developing plagiocephaly.

Risk factors that are more unique to torticollis include intrauterine crowding, a vascular phenomenon, fibrosis from peripartum bleeds, compartment syndrome and traumatic delivery, Srijon Mukherji MD of the oral and maxillofacial surgery department at the School of Dental Sciences in India wrote in Annals of Maxillofacial Surgery.

The causal evidence of effects of physical activity on certain delays noted in a BioMed Research International study is one of many resources available for treating motor skill delays.

However, treatment options for those diagnosed with the syndrome’s other elements is limited.

Other than waiting for normal skull growth to cure plagiocephaly, the condition’s most common treatment appears to be specially-designed helmets that fit closely to an infant’s head but also provide room for the skull to grow at the flattened area, Kate Rowland MD MS, of the department of family medicine at The University of Chicago and Nil Das MD, of the University of Pittsburgh Medical Center wrote in The Journal of Family Practice.

However, helmet therapy sometimes led to adverse events such as irritation, bad helmet odor, helmet-related pain and parents feeling hindered from snuggling with their child.

“Helmets for infants: No help and some harm,” Rowland and Das summarized.

Key Moments in Safe to Sleep® History, NIH Eunice Kennedy Shriver National Institute of Child Health and Human Development. The Safe to Sleep® campaign (formerly known as the Back to Sleep campaign) began in 1994 as a way to bring public attention to SIDS and to educate caregivers on ways to reduce SIDS risk. But the history of the campaign actually begins well before 1994 and includes activities in the United States and abroad.