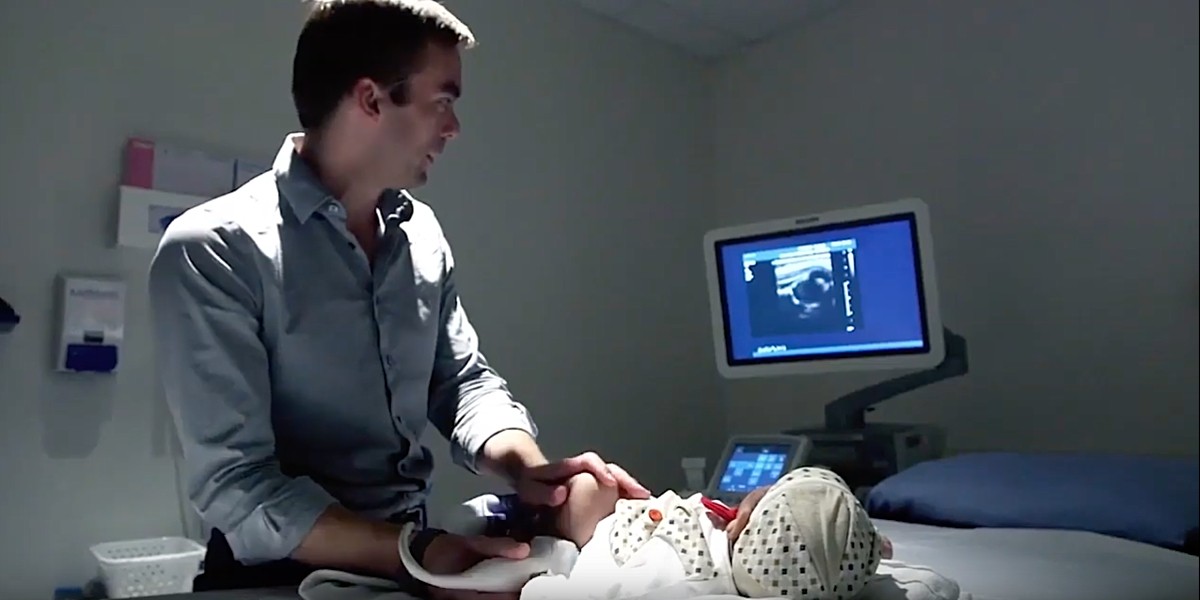 U of A radiologist and Medo.ai co-founder Jacob Jaremko performs an ultrasound scan on a baby to diagnose hip dysplasia. The U of A spinoff company is developing an app that would allow expert analysis of medical ultrasound images with minimal training—a boon for rural and remote areas with limited access to radiology services. Medo.ai

A University of Alberta spinoff company is hoping its new technology to analyze ultrasound images will make diagnosing health problems possible even from remote locations.

“My vision is for a 21st-century stethoscope, a tool where you can look inside the body and use artificial intelligence to help people who are not experts interpret the images,” said U of A radiologist Jacob Jaremko.

Along with former U of A, Alberta Innovates post-doctoral fellow Dornoosh Zonoobi and Jeevesh Kapur, a radiologist from Singapore, Jaremko formed Medo.ai two years ago to develop and commercialize software that creates and analyzes 3-D images from ultrasounds.

The company is focusing first on using its technology to diagnose hip dysplasia in infants. Newborns are typically given a physical exam to determine whether they have hip problems, but abnormalities can be easy to miss. When diagnosed early, hip dysplasia can be treated with a simple harness worn by the infant for a few weeks. Left untreated, it can lead to lifelong hip arthritis.

“In Alberta, there are about four babies born with hip dysplasia per day. And then on the other end of it, there are about two arthroplasties—hip replacements—done per day in patients younger than 65, people who have premature hip arthritis due to hip dysplasia,” said Jaremko, who holds the Alberta Health Services Chair in Diagnostic Imaging at the U of A and is also a member of the Women and Children’s Health Research Institute (WCHRI).

He said his goal is to eliminate the need for such surgeries by creating a universal ultrasound screening program for infants.

Jaremko found that with traditional ultrasound, which takes two-dimensional still images, even a small shift in the probe’s location can lead to a misdiagnosis.

The new system allows an operator with minimal training to take three-dimensional images that can be uploaded and compared with a large data set of other images to identify abnormalities and suggest a diagnosis.

Jaremko and Zonoobi gave medical students just one hour of training and found they were able to produce 3-D images as reliable as those produced by senior technicians.

Jaremko said analysis of the images is made possible by recent advances in computing power that allow networked computers to artificially mimic the learning function of the human brain.

“This is a revolutionary thing,” he said, adding that other medical imaging methods such as CT, MRI and X-ray are easier to analyze than ultrasound but are not as portable.

“Then you can really extend the reach of ultrasound and take it all over the world.”

“Ultrasound is safe, it is becoming cheaper by the day and it can easily fit into a pocket,” said Zonoobi. “It’s like magic—you can see inside the patient’s body in real time.” 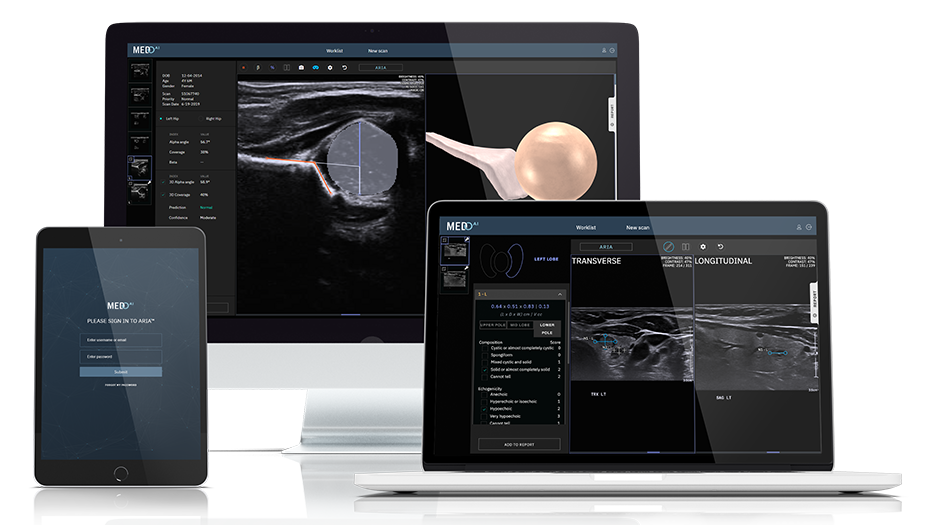 Medo.ai is already testing applications of the technology for other types of injuries and conditions.

“We want to take the expertise of the hospital to the patient, rather than have the patient come to the hospital,” Jaremko said. “Over time, we hope to put together a package which can analyze a lot of the body using ultrasound in ways that can help throughout the health-care system.

“You can imagine the potential of this point-of-care ultrasound for a physician in a clinic, a nurse in a public health setting, an EMT in an ambulance or a shopping mall.”

Jaremko and Zonoobi also see the potential for use in remote communities in northern Canada and around the world.

“Right now, families have to drive for hours and hours in the middle of winter just to get a simple scan done,” said Zonoobi. “There should be a way of decentralizing and democratizing medical imaging.”

Medo.ai employs 24 people in Edmonton, mostly computer programmers, many of them U of A grads, with venture capital from a Singapore firm.

Jaremko and Zonoobi said Edmonton is well placed for this type of startup, due to the high quality and integration of its health-care system and the expertise in artificial intelligence at the U of A.

They said Medo.ai will apply for U.S. Food and Drug Administration clearance by the end of this year and will begin pilots at the U of A and in the United States, Singapore, Brazil and Australia next year. They plan to have a proven hip dysplasia detection application ready for market within 18 months, and aim to have it in use throughout Alberta within five years.