Government says it did “informal” consultations about changes effective in March.

Albertans with disabilities who receive benefits from the province say they were never consulted about changes to monthly benefits which they say will put some recipients in a financial bind. 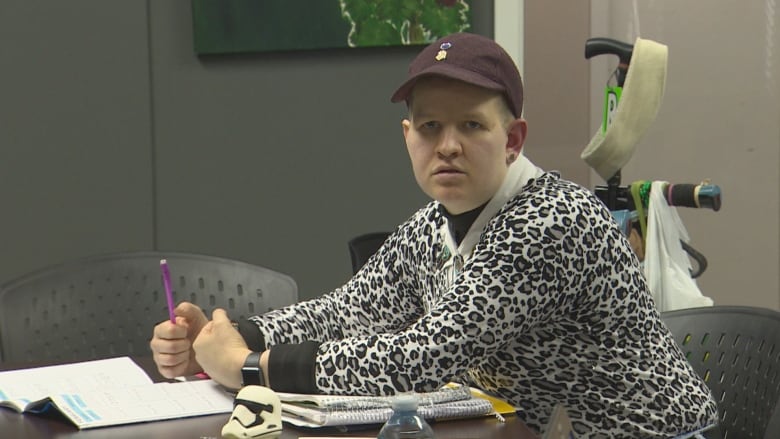 Sarah Symington receives AISH payments each month. She found out about the changes to payment dates on Facebook. Travis McEwan CBC

Starting in March, payments under the Assured Income for the Severely Handicapped program (AISH) will come on the first day of the month, instead of three or four working days before the start of the month.

When the first of the month falls on a weekend or holiday, payments will be made on the last business day of the previous month.

The same change is applying to Albertans on the province’s Income Support caseload. That program provides payments to individuals and families who don’t have resources to meet their basic needs.

Government statistics from November show 67,600 people were on AISH and another 61,000 were on the Income Support caseload.

People with disabilities say they were blindsided by the change which came without any consultation.

“I should not have found out through Facebook,” said Sarah Symington, an AISH recipient from Edmonton.

AISH recipients and advocates say the old system ensured they had money in their accounts in time for rent payments, or to buy their monthly bus passes in advance. The dates were posted online.

But Symington and others are frustrated and upset the government never asked them if the date change could cause problems for anyone in their community.

Heath Birkholz, the community advocate coordinator for the Self Advocacy Federation of Edmonton, said the lack of consultation over the date change was a surprise, particularly since the group was involved in discussions with the government about changes to Persons with Developmental Disabilities program.

“Nothing about us, without us,” Birkholz said, quoting a principle held by people with disabilities when it comes to changes that affect them.

“We really want to make sure that is acknowledged because again, we are as much of an Albertan as any other. It’s more of a way of dehumanizing our community.”

The government announced in the October budget that it would stop indexing AISH and Income Support to the cost of living, while holding monthly payments at the same level. Advocates say that amounts to a cut as the value of the benefits will erode over time as the cost of living goes up.

Marie Renaud, the NDP MLA for St. Albert and opposition critic for community and social services, was the executive director of a non-profit that worked with adults with disabilities before she was elected in 2015.

Renaud wants the government to give AISH recipients more time to weigh in so they can avoid any unintended consequences.

“People are nervous that decisions are being made behind closed doors,” she said. “This isn’t how you establish trust and rapport with this community.”

Diane Carter, press secretary for Community and Social Services Minister Rajan Sawhney, said the old schedule meant recipients waited as long as 41 days between payments. The situation was particularly acute over Christmas as payments went out before the holiday. That would create a surge in emergency requests for financial help in January.

The UCP have already attacked disabled Albertans by cutting AISH benefits and changing support payment dates. Now Jason Kenney will take away their ability to afford transportation, all to pay for his $4.7 billion corporate handout. #ableg #abhealth pic.twitter.com/c69ceIEFaO

Anyone concerned about missing rent or bill payments should reach out to their caseworker for help, Carter said.

The government was reluctant to answer questions about who Sawhney talked to about the changes.

CBC News asked a question about consultation. On Wednesday, Carter sent an email to Christine Myatt, the premier’s press secretary, Matt Wolf, the executive director of issues management, and Bryan Rogers, an issues manager in the premier’s office.

The email was part of a chain discussing how Carter would answer the question. The email chain accidentally included CBC News in the list of recipients.

“Think this is a good opportunity to push the 97% message. Was there any consultation with the community done at all?” Myatt responded.

“We have been doing informal consultations with stakeholders since minister began in the role,” Carter replied. “Informally, yes we have been talking to stakeholders.”

In the same email, Carter submitted a statement to Myatt, Wolf and Roger for approval. The statement didn’t answer CBC’s questions about who Sawhney had consulted with.

In a follow-up phone call with CBC News, Carter acknowledged there were no formal consultations. She later sent an email with an additional clarification.

“The minister is in regular contact with a wide variety of stakeholders including department policy experts and front-line staff,” she wrote.

People on AISH are still waiting for answers from the government. Even people who receive benefits its via direct deposit say the changes will create problems.

AISH recipient Julie Heffel said an earlier payment before the end of the month gave her time to take the bus downtown to buy her monthly transit pass. The changes mean she won’t have it for the start of the month.

“I have to get it on time,” Heffel said. “The lineups for bus passes are insane.”

Julie Heffel and her partner Jesse Andrew took part in a board meeting of Self Advocacy Federation of Edmonton on Tuesday. Travis McEwan CBC

Heffel said she has some savings to cushion the blow. She worries about people who are living month-to-month who could get hit with non-sufficient funds (NSF) fees they can’t afford.

“And you’re running into insufficient funds and a whole bunch other banking problems you don’t really want.”

Renaud is also concerned about the lack of consultation.

“The vast majority of people on AISH and on income support are struggling with grinding poverty. So when you introduce this additional stress you are introducing harm that wasn’t necessary,” she said.

“You have to respect all Albertans enough to talk to them about decisions that impact them now.”