Nearly two years after a relatively minor operation that required just three weeks of recovery, Maria Konopeskas remains stranded in an Ottawa hospital because a chronic shortage of personal support workers is preventing her from returning home.

Konopeskas, 62, is no longer receiving any medical treatment, and her situation isn’t unique.

In November 2018, there were six people stuck in hospitals in the region due to a shortage of personal support workers (PSWs).

Now, just a year later, there are 19, according to the Champlain Local Health Integration Network (LHIN).

The Champlain LHIN has determined Konopeskas, who has cerebral palsy, needs three PSWs to visit twice a day for about an hour each time, first to get her out of bed and assist with her personal hygiene in the morning, then again in the evening to get her back into bed.

Before she was admitted to hospital, Konopeskas had the help of just one PSW twice a day.

Prior to her surgery in November 2017, Konopeskas, who taught high school English and French before becoming a federal government translator, was able to walk and used a scooter for longer distances.

She said she’s lost mobility since being in hospital, where she isn’t receiving any physiotherapy.

“I have slowed down and I’ve gotten weaker,” she said. “Being in the hospital has done that.”

Konopeskas said she’s seen a hand-pedalling machine gathering dust in a nearby office at the Ottawa Hospital’s General campus.

“I want to move and exercise so my muscles don’t hurt,” she said. “I’ve been begging to use it.”

The Champlain LHIN would not agree to an interview, but in a statement interim CEO Catherine Butler said the agency is committed to meeting the needs of its home-care clients.

“Recently, the province-wide shortage of PSWs has been affecting our ability to do so for all of our clients in this region. At times, because of this shortage, the safest option for some clients is to remain in hospital,” Butler wrote.

“We deeply and genuinely regret the problems this shortage causes for our clients and their loved ones, and completely understand clients want to go home.” Konopeskas says she’s lost mobility since being admitted to hospital, where she’s receiving no physiotherapy. CBC

Konopeskas’s private hospital hospital room is small and crammed with books. The sunny window ledge is dotted with flowering plants.

“They are rather soul-destroying, and it’s monotonous.” 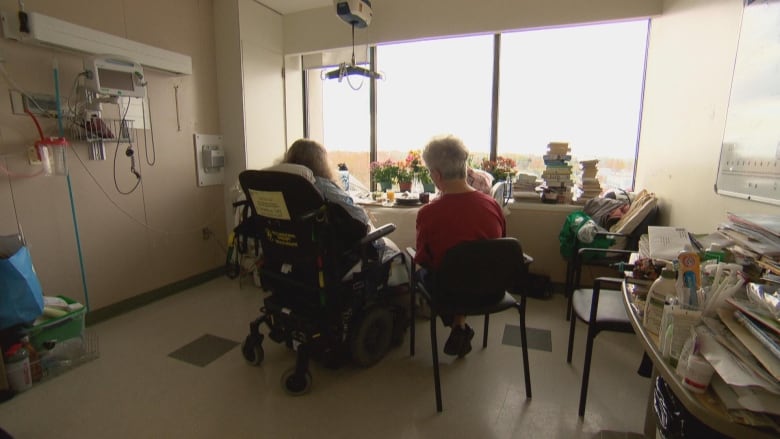 Konopeskas enjoys a rare visit. ‘People have forgotten about me.’ CBC

Her room is on a locked ward, and she often hears the shouts of older dementia patients in the night.

“There’s no privacy and no dignity,” she said. “My friends haven’t seen me. People have forgotten about me.”

Robin Meyers, director of community support services at Carefor, a not-for-profit agency that provides community health care in Ottawa, said there’s been a 40 per cent increase in the demand for PSW services over the last two years.

Despite hiring more than 100 new workers in that time, Meyers said Carefor is still short 15 employees. The average PSW who works in a client’s home earns about $19 per hour, $5 or $6 less than they would in a hospital, Meyers said.

“To bring this… crisis under control, it’s not just the actual shortage of PSWs,” she said “There’s wage parity, job conditions and recruitment, and everyone has to come to the table to solve this.”

After a long wait for an accessible apartment in a housing co-op in Vanier, Konopeskas finally got a unit in July 2018 — while she lay languishing in hospital. She’s never lived there.

“I’ve paid rent for over a year and I’ve paid hydro and for a water heater [even though] I haven’t used one drop of that water. But I’m not going to lose it. I waited too long to get it.”

On Nov. 26, Konopeskas will contest the LHIN’s PSW assessment before Ontario’s Health Services Appeal and Review Board, where she’ll be represented pro bono by a lawyer who will argue for her discharge from hospital.