A biking accident left Kirk Williams paralyzed, but he has traveled widely and inspired others to follow in his tire tracks. 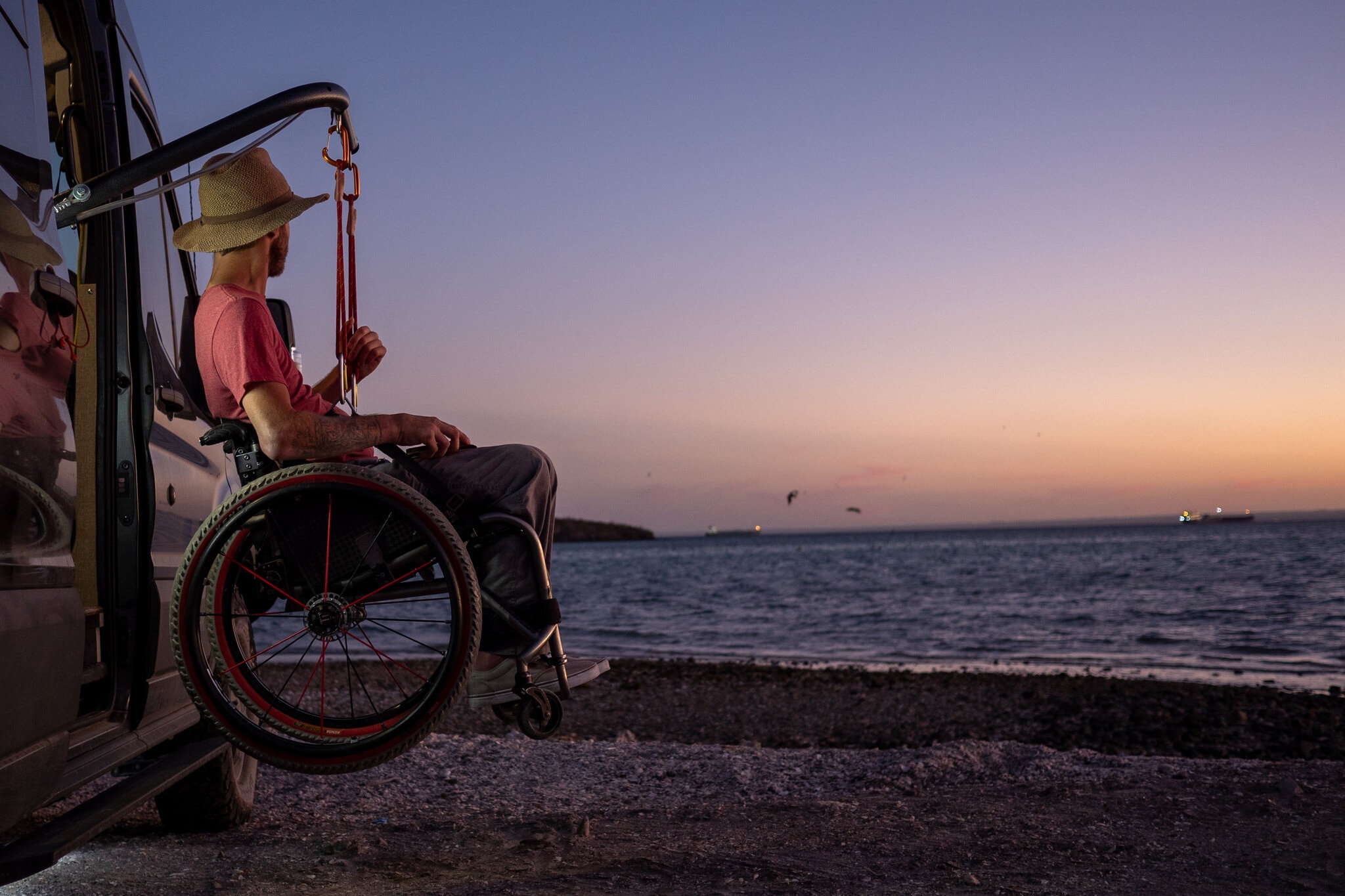 Kirk Williams in Baja, Mexico. “When I take the lift out of the van,” he said, “everyone seems to stop what they’re doing to watch me.” Kirk Williams photo

Kirk Williams loved racing mountain bikes and “enjoyed playing on anything that had a motor,” he said.

Katie Renker, a photographer and musician, chained herself to big pink boats in climate protests and sang songs with refugee choirs.

Mr. Williams graduated in 2009 with a degree in sociology from the University of Colorado in Boulder, “although after spending a semester abroad in Ghana, Africa, I knew my career path was headed towards travel, photography and storytelling,” he said.

Four months later, he crashed on a routine mountain bike ride and broke his neck — leaving him a quadriplegic, with no movement below his upper chest and limited sensation in his arms and hands.

Just over 14 months ago, Ms. Renker’s life also derailed. She “beautifully exploded my C7 vertebra by diving into a lake at midnight that turned out to be quite shallow during a Tinder date gone wrong,” she said. It left her paralyzed from the collarbone down.

Mr. Williams never lost his adventurous spirit, and with a specially outfitted van, he has traveled widely — and inspired people like Ms. Renker, with whom he has communicated via Instagram. He made a trek to Alaska in 2015 and has just returned from a trip to Argentina in his 2017 Ford Transit van.

“The medium roof is a great height,” he said, adding that it was “barely short enough to fit inside a high cube container for international shipping.”

Loren Worthington, vice president for marketing and communication for Ability360, a nonprofit group in Arizona that supports people with disabilities, has picked Mr. Williams’s brain about what has worked and what hasn’t in his accessible van. Mr. Worthington, who was injured playing baseball 36 years ago, also pilots a four-wheel-drive accessible van.

Mr. Williams’s willingness to share private details about living on the road with a disability sets him apart, Mr. Worthington said.

“Other people with disabilities often don’t even think it’s possible to travel until they meet someone like Kirk, who’s an open book,” he added.

The details are complex, but the cost is what’s daunting. “The biggest hurdle in accessible vehicles,” Mr. Williams said, “is often the enormous expense that goes into modifying them to work for you.” Building accessible vans with mobility equipment can start at $30,000. But programs or grants can help offset costs. 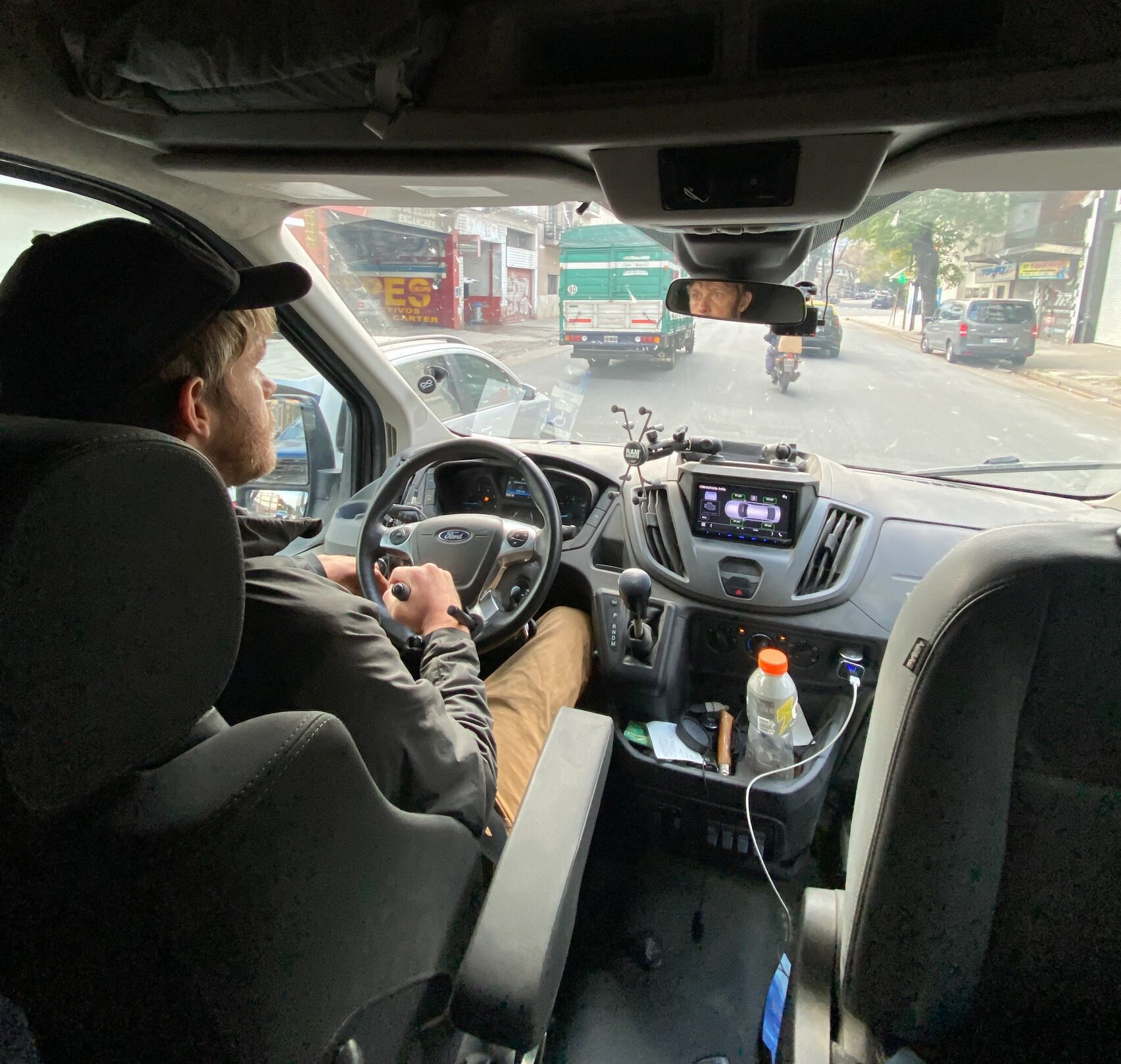 For his retrofitting project, Mr. Williams qualified for a Colorado Division of Vocational Rehabilitation program.

“Not all states have as well-funded programs, and not all people qualify for them,” he said. “The process is slow, tedious and took me nearly a year and a half to complete.” Although he received aid for 75 percent of the project, he bought the van himself.

That was when he got in touch with Leland Gilmore, a fellow cyclist, at Benchmark Vehicles in Portland, Ore. The business now specializes in high-end vans but was originally a cabinet and furniture company.

Mr. Gilmore “was just getting going in the van game,” Mr. Williams said. They “immediately hit it off,” he said.

Mr. Gilmore added, “Once I got on board with the story and his mission, I was really motivated to do it.”

Before starting, Mr. Williams simulated layouts using coffee tables and painter’s tape. He measured how high he could transfer into bed, what angles he needed, how tall his knees were and how high counters were.

While the alterations to help Mr. Williams drive the van and get his wheelchair in and out were completed by a licensed mobility specialist, the interior was completed by Benchmark Vehicles. Consequently, Mr. Williams’s van is more comfortable for him than hotel rooms certified as compliant with the Americans With Disabilities Act.

This “apartment on wheels” uses only electric amenities. “It would be difficult for me to fill up a propane tank, and I don’t like to be around open flames,” Mr. Williams said. “I don’t have temperature sensation in about 80 percent of my body,” he added, and “fire in a wooden van scares me.” Mr. Williams no longer sweats or shivers, “so I need to make sure I can stay warm and cool accordingly,” as well. 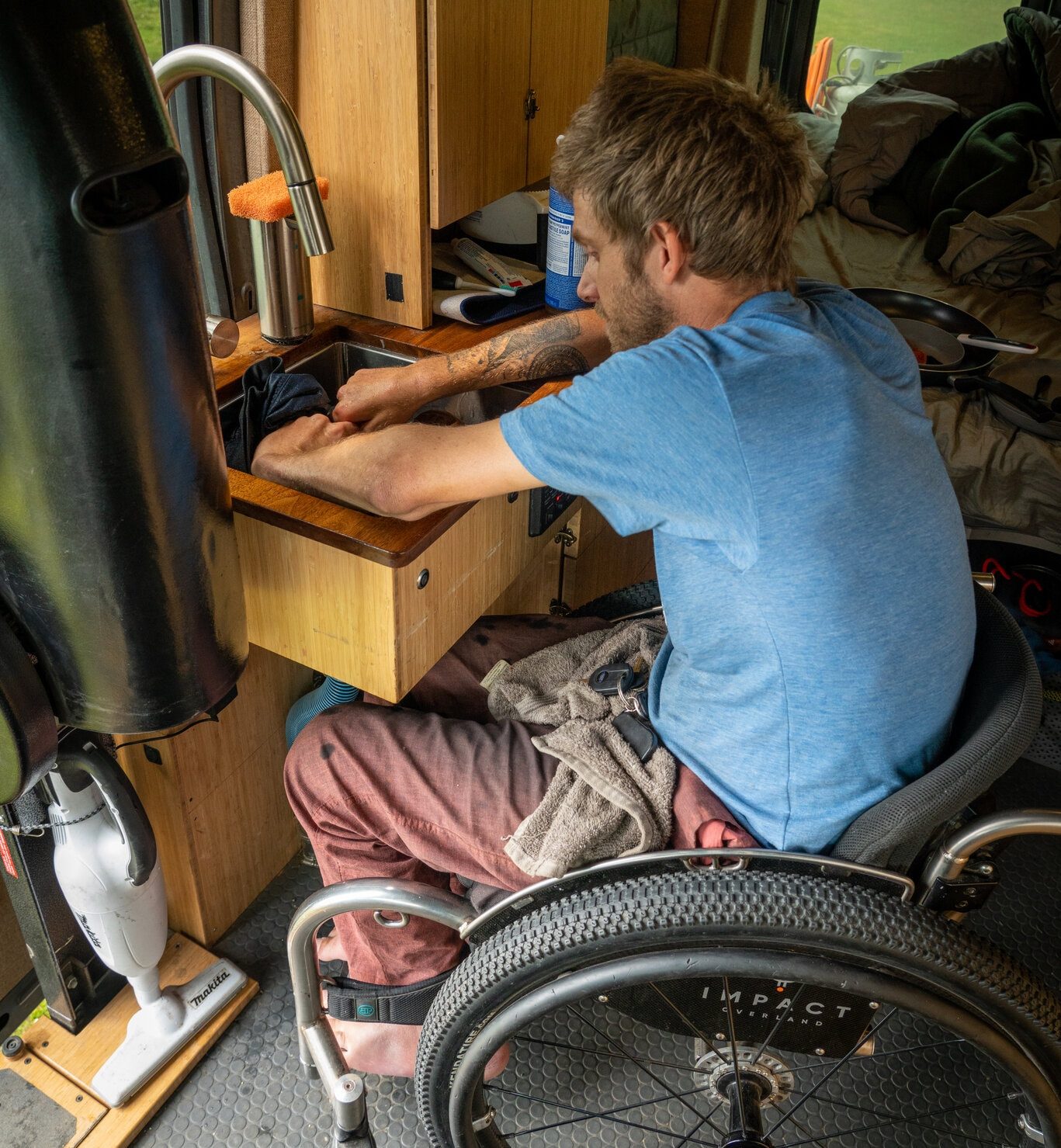 Mr. Williams at the sink in his van. The amenities have helped him maintain his independence. Clayton Williams photo

He is proud of the van’s ample counter space and storage areas. “It’s really difficult for me to lean over and do anything without any core muscle functions,” he said. Pullout counters and drawers with adaptive cooking knives and can openers make things easier. Wide aisles for his wheelchair mean greater maneuverability. Incorporating proper heights and clearances was critical.

The van has an induction stovetop, a 12-volt refrigerator, a sink, a heater, insulation, operable windows, a bed and other amenities.

After his accident, Mr. Williams learned to live independently. “This led me to starting my own drone photography business,” providing photos and videos for everything from construction projects to movies, he said. He added that he was one of the only quadriplegic drone pilots certified by the Federal Aviation Administration.

He has piloted the van over 45,000 miles so far, traveling from Key West to Seattle to Cabo San Lucas, Mexico, and down to Ushuaia, Argentina, from Santiago, Chile.

All those miles take a toll. “I’ve had issues with my lift, the power door and the power seat base,” Mr. Williams said. “Everything except for the hand controls.” Accessibility equipment isn’t made for harsh environments, and not every mechanic’s shop can fix the gear, either. 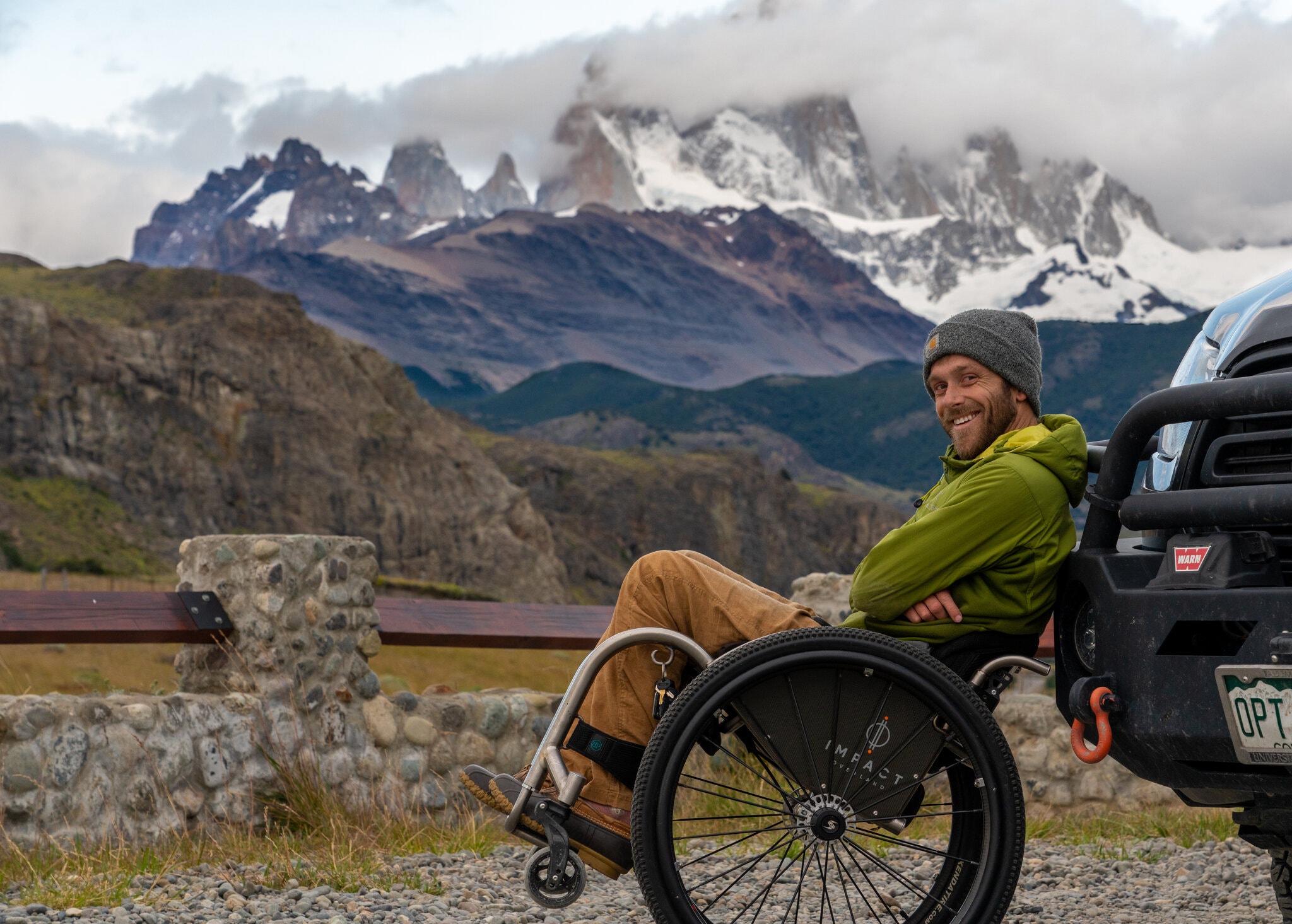 After all of his experiences, Mr. Williams is eager to give back, and he has teamed with the nonprofit Walkabout Foundation, which provides wheelchairs in developing countries and teaches about adapting vehicles for accessibility. For just over $300, Walkabout can deliver a wheelchair anywhere in the world. Mr. Williams’s goal is to raise $15,000 to ship an entire container of wheelchairs to Latin America.

He also gives talks at hospitals as a peer mentor, teaching patients about adaptive overlanding or van life.

“Kirk is a yaysayer, not a naysayer,” said Topher Downham, an outreach coordinator at the City of Boulder Open Space and Mountain Parks. Mr. Downham is a quadriplegic, too, and he and Mr. Williams have become good friends.

They have traveled together on multiple adventures, like scuba diving in Cozumel and four-wheel mountain biking on the steep trails around Boulder. “There are a lot of good people around the world that’ll help you in a pinch,” Mr. Downham said.

Mr. Williams realized that people with and without physical obstacles were curious about adapting vehicles. His goal is to build a website with information about his van as well as networking opportunities.

His wheelchair breaks down prejudices, he said. “People generally are excited and willing to help me any way they can,” he said. “When I take the lift out of the van, everyone seems to stop what they’re doing to watch me.” He’s used to that, knowing that people are excited to see what’s possible with a disability.

The coronavirus had kept Mr. Williams stuck in Buenos Aires for four months. But he was fortunate to have his brother, Clayton, with him. They recently returned to the United States to continue helping others. 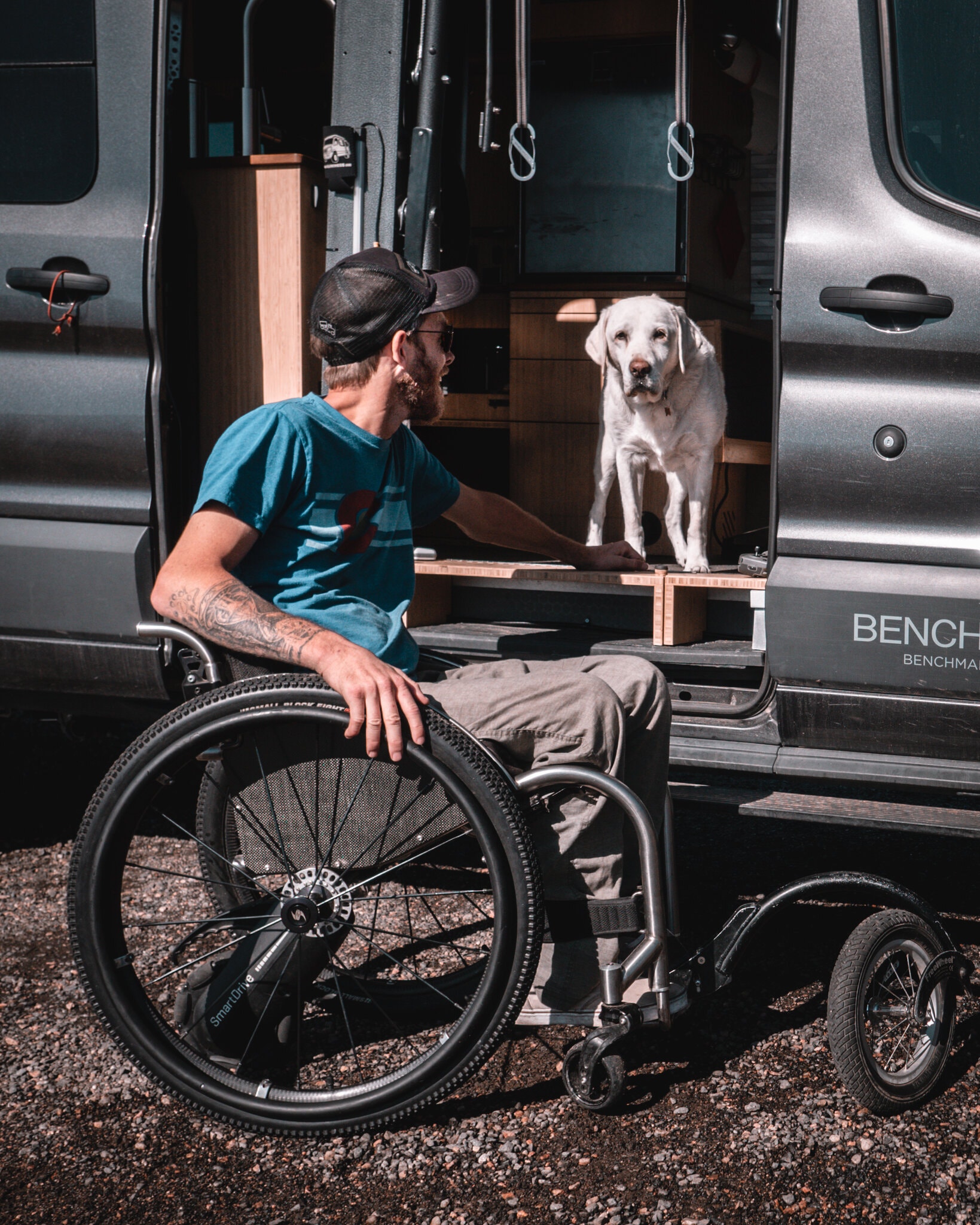 “People generally are excited and willing to help me any way they can,” said Mr. Williams, with his dog, Bella. Clayton Williams photo

His Instagram acquaintance, Ms. Renker, plans to move to Edinburgh to start her degree in transformative teaching and learning. After talking to Mr. Williams, she’s inspired. Her dream is to build an accessible sailboat and sail back to her childhood home in Sri Lanka.

“I wanted to change the world. And I will,” she said.

“Adventure and freedom and independence were everything to me,” she said, with him in mind. “So, keep living like you do, so I know I can too.”

Pediatric Orthopedic Clinic, Alberta Children's Hospital
20% of disabled Albertans who need workplace modifications don't get them
When not to fix: Thoughts of an orthopaedic surgeon
Mobility is a key factor in self–care independence for kids with cerebral ...
Calgary researchers develop portable brain imaging system to shed light on...
Pectus carinatum patients report high satisfaction with bracing