Sask. government promised to expand funding for autistic children in 2021. 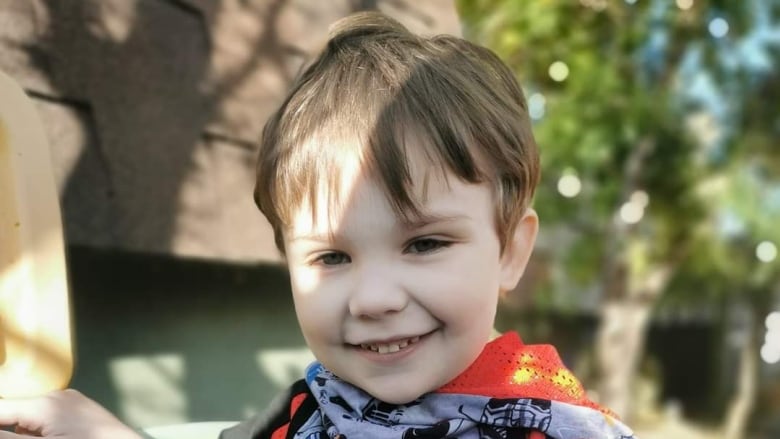 Declan, who recently turned six, is autistic. His mother, Tarah Degelman, says the pandemic has been hard on him because of the lack of access to therapies and the disruptions to his routine. Submitted by Tarah Degelman

At the start of the COVID-19 pandemic, his mother, Ali Mysiorek, says she was “really scared” of how the impending lockdowns would impact her autistic son. She was afraid he would suffer without access to the programs and therapies he normally attends in Saskatoon.

Instead, the extra time she and her husband have been able to spend at home this year has been a boon for her family.

“There were a lot of times in his childhood where other kids his age were hitting developmental milestones and we thought we would never see them. He was so delayed in some aspects,” said Mysiorek.

“It hurts when you see everyone else learning this, that and the other thing, and your child has yet to say ‘I love you, mom.’ But since COVID hit, now my kid is actually calling me mom.”

I hate to be that parent or that person who said we’ve benefited from the pandemic, but I wouldn’t change it for the world. – Ali Mysiorek

They opted to homeschool Hunter for kindergarten this fall, and found out that he knew more than they realized. With that time, and the online resources that have been made available to families during the pandemic, Mysiorek said Hunter’s reading and language skills have improved beyond what she could have imagined.

“COVID definitely hurt our businesses, but in the grand scheme of things, when I look at how far my son has come this year, it doesn’t even matter,” she said. “I hate to be that parent or that person who said we’ve benefited from the pandemic, but I wouldn’t change it for the world.”

But while some families with autism have found a silver lining in the pandemic disruptions, others have lost the routine and supports that helped their kids learn, and say it’s a “wake-up call” for the gaps that exist in the system.

Amanda Hayward, a mother of three in Regina, said the pandemic has brought some positives for her two autistic sons — particularly her nine-year-old, who used to struggle with anxiety at school.

“For my son to get in front of a class and share something, or participate in a Christmas concert, he would scream the whole time,” she said. “But being at home and getting to share with his friends but having his mom beside him, that takes some of the anxiety off.”

Hayward said online learning has given her children the opportunity to practise problem-solving skills outside of a classroom setting, like knowing when and how to ask for help .

“These are more adult skills about how to navigate the world, so I feel that there’s some independence that’s being built that might translate into having a job later on, like when you need to ask your employer for clarification,” she said.

But for those who benefit from supports outside the home, losing them has come at a cost.

Tarah Degelman’s six-year-old son, Declan, thrives off of routine. When his activities and therapy sessions shut down in March, he struggled to adapt.

Normally, Declan is a very happy little boy, and he was not happy anymore. – Tarah Degelman

“Although we tried our best to do the things that were always being done in therapy,” said Degelman, “he seems to do better with learning outside the home, so we saw a massive regression.”

Declan was always crying and struggled to sleep. He also got more angry and violent. Degelman was covered in bites and bruises.

“Normally, Declan is a very happy little boy, and he was not happy anymore,” his mother said.

When some schools in Saskatchewan moved to remove learning, Amanda Kish’s family struggled, too. Her seven-year-old twins, Brynn and Brielle, are autistic, and they would normally have educational assistants in the classroom. But once the pandemic started, the family “felt like we had no support whatsoever.”

“We were basically left on our own,” said the mother of three from the town of Redvers, Sask. “The school tried until the end of June — they would meet us on the other side of the fence, maintaining social distancing — but Brynn would be having a meltdown, trying to get back in the house. Brielle would just be ripping around the yard.”

Kish also struggled to co-ordinate appointments with the twins’ pediatrician, who wanted to see them in person for medication adjustments despite the risks of travelling between communities. She tried reaching out to local organizations for support, but found their responses underwhelming.

“[An] autism [organization] in Weyburn sent us some stickers, which, you know, the girls eat,” she said. “So that wasn’t helpful.” Amanda Kish of Redvers, Sask., sits with her daughters, Kadence, and twins Brynn and Brielle. Submitted by Amanda Kish

For Kish, the pandemic has been “a big wake-up call” for how flimsy some of the support systems her children rely on can be.

“We went through six months with our children being basically ignored, not helped at all,” she said. “To me, it should be essential that they were still able to access services. I am very disappointed in the province and the federal government as well.”

From June through September, caregivers of people with intellectual disabilities in Saskatchewan received an extra $100 a month from the provincial government.

“These funds were in recognition of the closure of a number of respite options such as summer camps this year, and was meant to support caregivers in accessing broader respite options,” said Shelley Reddekopp, executive director with disability programs at the Ministry of Social Services.

But Kish said those funds didn’t make a dent in her family’s additional needs during the summer months.

Christa Baron, co-founder of Above and Beyond Autism Consulting Services in Regina, heard similar concerns from many families during the early days of the provincial lockdown.

“There was a lot of fear, and I think a lot of that fear was warranted,” she said. “Some families will report to us that they are isolated in what they can access, whether that’s in their community or what services are available to them. So the idea of then closing down those limited resources was even more worrisome for them.”

Baron said this past year has made many families of autistic children more aware of gaps and insufficiencies in resources and services.

“I think it really becomes apparent how much you’re relying on those services to continue, and perhaps wanting more so you won’t be in this position in the future, if we ever end up this way again.”

According to a spokesperson from the Saskatchewan Ministry of Health, the government is continuing to work toward an implementation date.

When it was announced that school would be returning in-person learning for the fall term, Kish knew her daughters would finally get the support they needed again.

“I was so beyond ecstatic. I cried with joy and relief … because you can only do so much,” she said. “When they say ‘it takes a village to raise a child,’ it takes a couple villages to raise our daughters with all the supports they would normally have. So it was a big, huge relief that school was back.” Declan, who recently turned six, is autistic. His mother, Tarah Degelman, says the pandemic has been hard on him because of the lack of access to therapies and the disruptions to his routine. Submitted by Tarah Degelman

“He thrives off routine, so we just notice a much calmer boy, and he loves being there. In fact, so much so that weekends can be a little tough because he’s wanting to go. We have to hide his jacket and his boots and his backpack or he’ll take them to the door.”

Kish is asking her fellow Saskatchewan residents to follow all the public health guidelines so that schools can stay open and her children don’t “regress again.”

Also see
Sask. parents of children with autism face rocky return to school CBC
Working from home with an autistic child has been the greatest challenge and the greatest eyeopener CBC