Born with brittle bone disease, Jackson Storey is defying the odds and wearing a cute helmet while doing it. 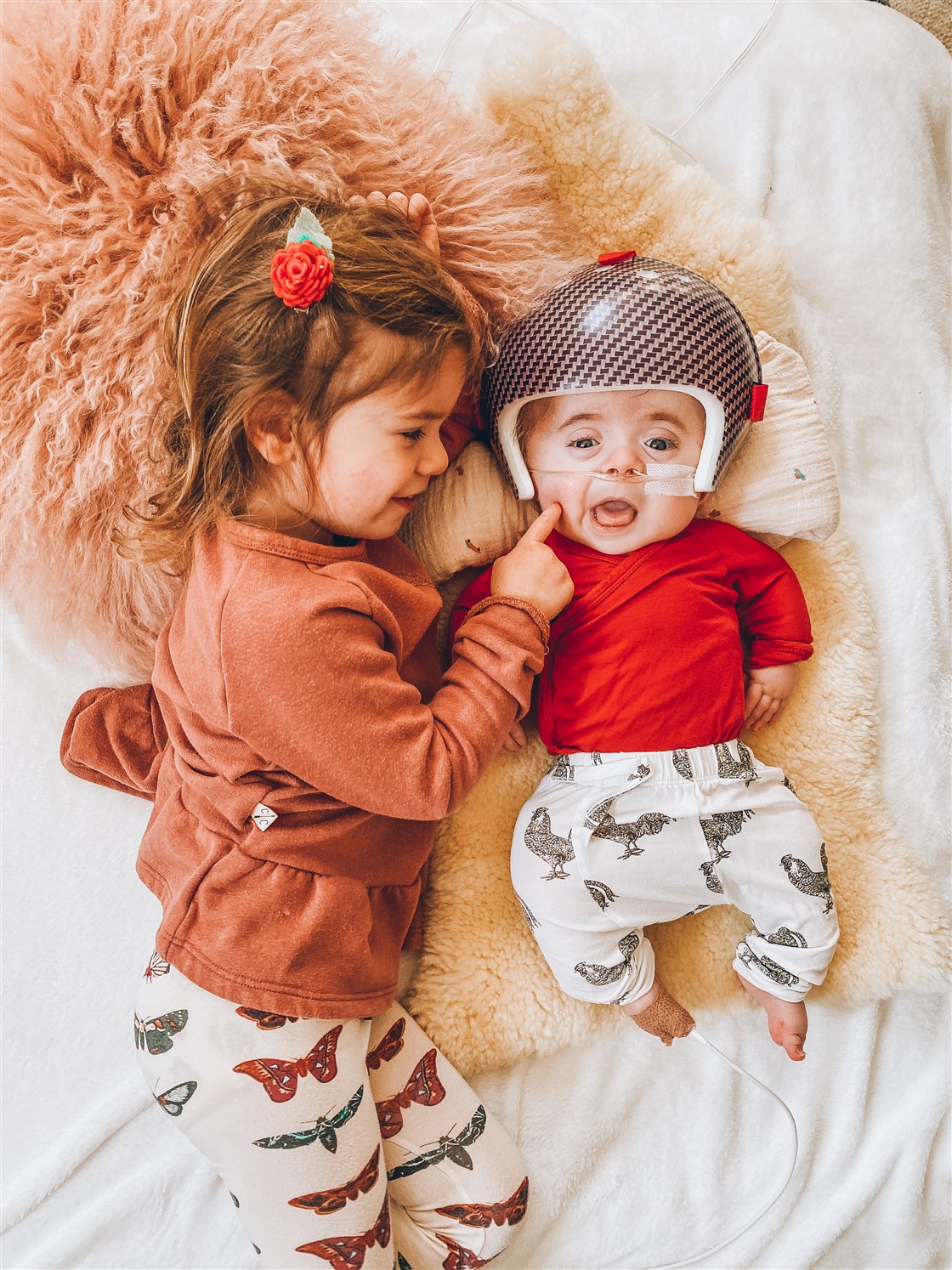 When Abby Storey was 28 weeks pregnant with her son, Jackson, she and her husband, Jordan, learned their baby had a rare genetic disorder that causes weak bones and is often called “brittle bone disease.”

Doctors told the Storeys there was a chance Jackson would not be able to breathe at birth due to weakness within his chest wall, leaving the couple to handle the devastating prospect of losing their child.

“It was really touch and go,” said Storey, who delivered Jackson via C-section on March 17, 2020. “But then he came out and they got him stable and never had to do any type of invasive respiratory support.”

Jackson was, however, born with multiple broken bones due to his genetic disorder, stage 3 osteogenesis imperfecta (OI).

“He had a lot of fractures, broke his tibias and had a bunch of broken ribs,” Storey recalled. “Some people count (the number of fractures an OI baby has at birth), but we really feel like there is no point. He had tons. Countless.”

Storey also noticed the back of Jackson’s head was flat. After spending eight weeks in the NICU, he had to spend a lot of time resting on his back while healing. 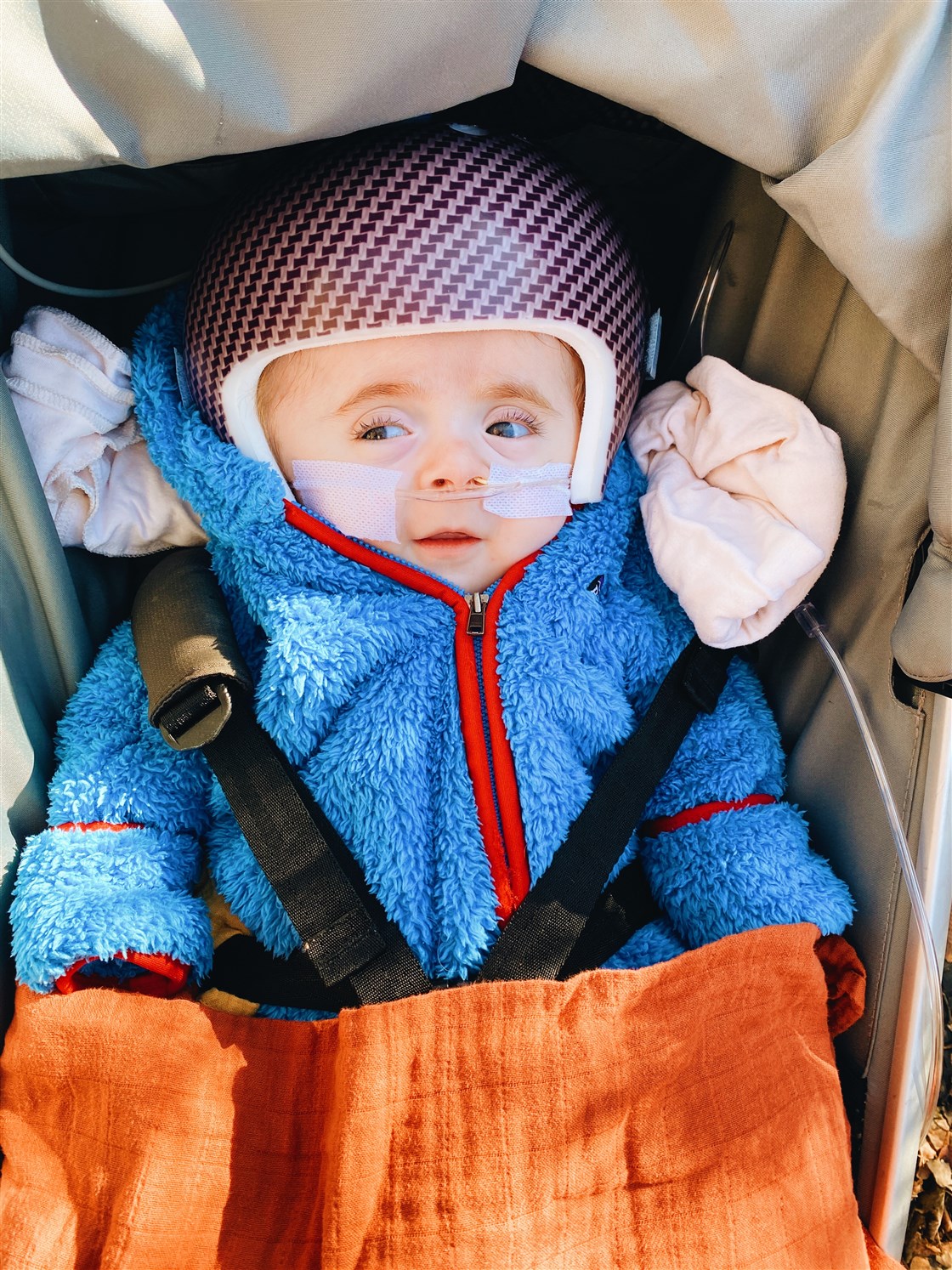 Jackson turned 1 in March 2021, and will continue wearing his helmet for a few more months. Abby Storey photo

“It was hard to reposition him, even when he was not broken,” said Storey, who currently takes Jackson for regular infusions of pamidronate, a drug that strengthens brittle bones. “He has a massive soft spot in the back of his head, so we always knew we’d want to try treating it with a helmet.”

Eventually, Jackson’s doctors suggested he begin therapy with a helmet to treat his cranial plagiocephaly, a condition that can affect any baby and occurs when an infant develops a flat spot on part of their head.

In October 2020, when Jackson was 8 months old, he began treatment with Shannon O’Shea, a prosthetist and orthotist at a Hanger Clinic location within Children’s Mercy Hospital Kansas City.

O’Shea, who has studied the use of cranial helmets to treat babies with OI, created a special helmet for Jackson that separates into two sections so he can be gently placed into it before the top is attached. 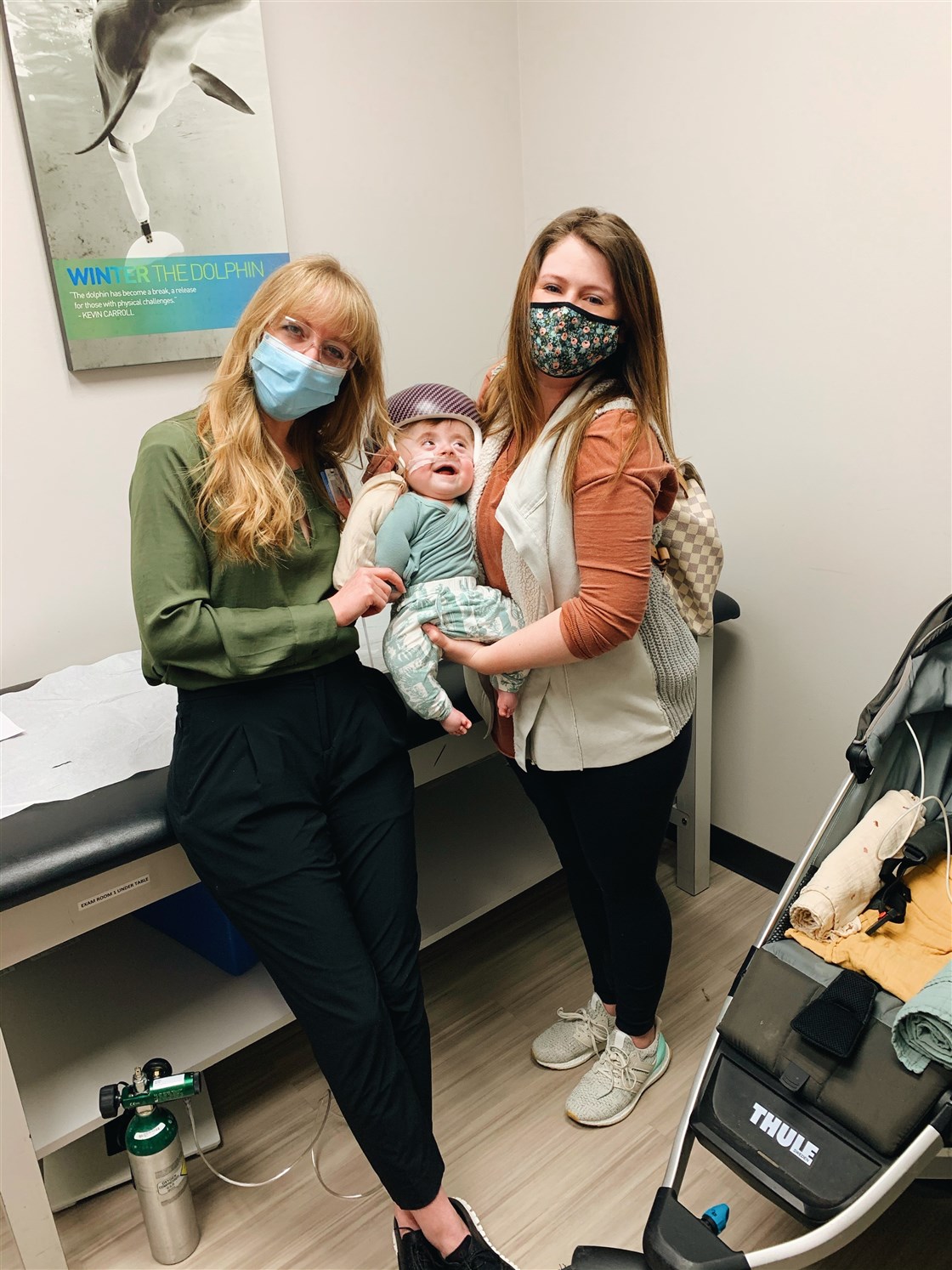 Jackson, who turned 1 on March 17, has been wearing his helmet ever since, and O’Shea says it’s working. Jackson’s current treatment plan calls for continuing use of the helmet until he’s about 15 months old.

“We want to make sure that any correction we do achieve with the cranial remolding treatment, we maintain as long as possible because with OI, that bony structure is so incredibly sensitive to force and pressure,” O’Shea explained. “If we are still lying in a back sleeping position constantly, there is potential opportunity of regression, but around the 15 to 18 month age range, the chance of regression goes down.”

Storey said she often gets questions about her son’s helmet and why he needs to wear it.

“They ask if we do it for protection and the protection part of it is nice,” she said, “but that’s not why we have it.”

To help raise awareness of why babies sometimes need helmets, Storey frequently shares adorable photos of Jackson on her blog, And So the Storey Begins, and her Instagram account.

“It’s not necessarily an awareness account, but I’m just sharing him in his helmet and sharing us doing normal things,” said the mom of two. “Sometimes I think that’s better than oversharing the nitty-gritty detail stuff.”

According to a 2013 study by the American Academy of Pediatrics, nearly half of all babies have some form of cranial plagiocephaly. March 20 is National Plagiocephaly and Torticollis Awareness Day, and Storey hopes sharing Jackson’s helmet success story will help educate parents whose babies may need the same treatment.

So what advice does Storey have for parents who are considering a helmet for their baby?