People with the condition risk fracture more than the general population, but the timing raises new questions. 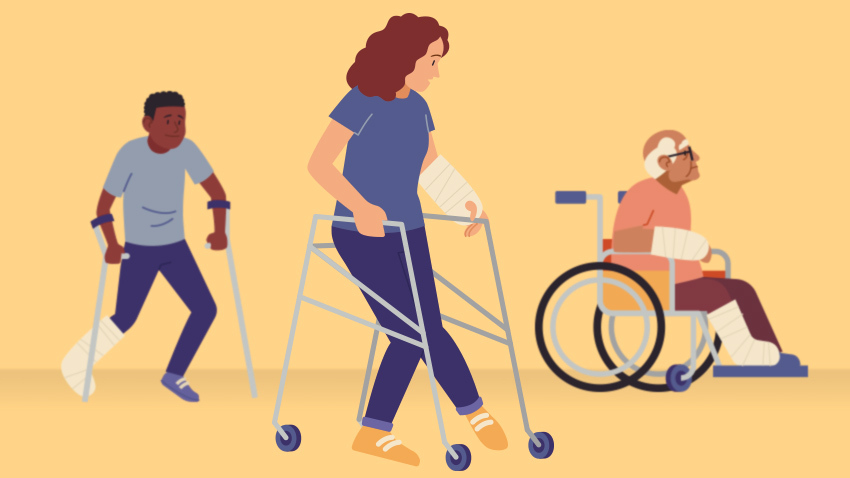 Throwing out one’s back is a universal, albeit clichéd, sign of middle age. What’s less common is 50-year-old men with the fragile bone strength of men in their 80s.

Researchers at Michigan Medicine found a subset of middle-aged men with cerebral palsy are up to 5.6 times more likely to suffer fractures than men without the disorder.

“We are not really sure why this happens,” said Edward A. Hurvitz MD, professor and chair of the Michigan Medicine Department of Physical Therapy and Rehabilitation. “It may be related to structural differences that occur during adolescent growth, or to greater bone mineral loss at earlier age for people with cerebral palsy compared to peers.”

For a study published in BONE, the team examined the timing and site of bone fractures for around 10 million people with and without cerebral palsy using public and private insurance claims from 2016. They found people with the disability have fragile bones that present high fracture risk, but at different times across the lifespan compared to the general population.

“Knowing that critical periods of bone health are different for people with cerebral palsy is vital for clinicians so they aren’t missing windows to augment bone strength,” said Daniel Whitney PhD, the study lead and assistant professor of physical medicine and rehabilitation at Michigan Medicine.

A period of critical bone health is when a person’s bones are rapidly changing. In developmental years, they grow larger and stronger. They lose bone mineral density over time and may become weaker – for women, that can happen during menopause. Physicians often use these critical periods as reference points for fracture prevention efforts and post-fracture health care management.

The team examined fracture risk across the lifespan to see if the critical periods of bone health from the general population align with the timing of fracture vulnerability for people with cerebral palsy.

In addition to the revelation about the surprisingly elevated fracture risk in middle aged-men, researchers found that adolescence and young adult years are a particularly vulnerable time for fractures for people with cerebral palsy, but in different ways for females and males.

Finding that both age and sex influence fracture risk at different times across the lifespan, the team developed new sex-specific critical periods of bone health for this population.

While this study positions clinical care to better align with the timing of the skeletal needs for people with cerebral palsy, it also raises a number of questions, Whitney said.

“Why do middle-aged men with cerebral palsy exhibit such a drastic increase in fracture risk?” he said. “Do women with cerebral palsy experience a similar timing or effect by the menopause transition on bone health? What is going on with the bone biology and structure early in life that sets the stage for their premature and profound bone fragility?”

It is well known that people with cerebral palsy have a higher risk of fractures, but this new study will change the way we think about fracture prevention, especially for adults, Hurvitz said.

“When we consider the high risk of chronic disease and early mortality associated with fractures that we have discovered in our previous work, fracture prevention for this population is a critical aspect of their care,” he said.

The claims data used for the study doesn’t reveal the severity of cerebral palsy patient’s condition, which, researchers noted, would have added to their understanding of bone fragility.

This study will allow physicians to be more proactive with fracture prevention, and the next step is understanding exactly why bone health presents differently with these patients compared to the general population, Whitney said.

“When we only have a screwdriver, every problem will look like a screw,” he said. “This study provides novel insight into the magnitude and unique timing of bone fragility across the lifespan for individuals with cerebral palsy, and it expands our toolkit to identify new ways to address a long-standing problem.”

Strenuous exercise is safe for people at high risk of knee OA
An engineer explains how to forge a career designing for disabilities
Self-identifying as disabled and developing pride in disability aid overal...
Relief for joints besieged by arthritis
Leg exercise is critical to brain and nervous system health
Calgary researchers develop portable brain imaging system to shed light on...