Ryan Straschnitzki had epidural stimulator implanted in his spine in Thailand two years ago. 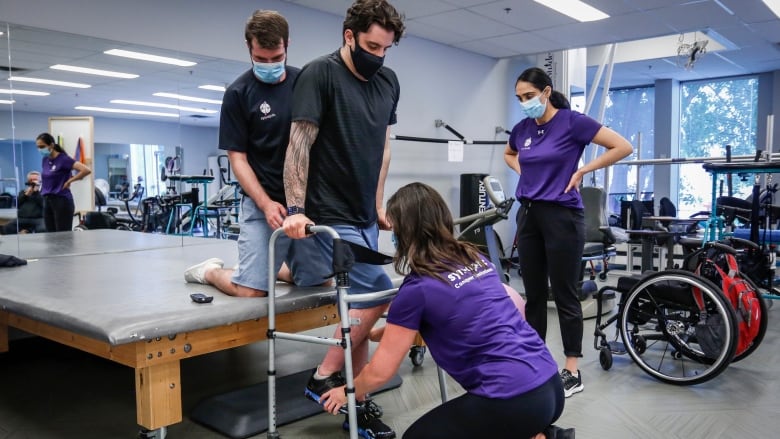 Humboldt Broncos bus crash survivor Ryan Straschnitzki, centre, is helped to stand in a walker by Eric Daigle, left, and Jill Mack, centre right, while he attends a physiotherapy session in Calgary on June 24, 2021. Jeff McIntosh, The Canadian Press

Behind his face mask, sweat glistening on his forehead, Ryan Straschnitzki was smiling.

The 22-year-old, paralyzed from the chest down when a bus carrying the Humboldt Broncos junior hockey team crashed in 2018, had accomplished another milestone in his long recovery.

He needed a walker to help him, and his arms were shaky from the effort, but after three-plus years he was seeing the world from a different — and higher — perspective.

“Sitting down here you kind of look up at everyone. You forget how tall you are,” he laughed.

“I’m pretty happy… but again not really satisfied. I know I’ve got a lot more to give, and I know next session’s going to be even harder. It’s really humbling to see the progress that I’ve made but I’ve got a long way to go.”

Straschnitzki has been working with a team from the Synaptic Neuro Rehabilitation Centre in Calgary. He had an epidural stimulator implanted in his spine in Thailand two years ago. The device sends electrical currents to his spinal cord to try to stimulate nerves and move limbs.

He has learned to program the device, which looks from a distance like a calculator, and part of his physio while standing involved him lifting his legs.

Trying out the walker for the first time ! thankful for the physios that push me to be the best I can every session. One step closer than I was the day before 👊🏻 pic.twitter.com/PHw6HHg6Ys

“The [stimulator] helps me move my legs and keeps me balanced. I’ve kind of became accustomed to it and using certain programs that work best for certain movements.”

Straschnitzki, who hopes to one day play sledge hockey for Canada at the Olympics, said his next goal is being able to take a few steps.

Uyen Nguyen, the executive director at Synaptic, said Straschnitzki has worked hard since his return from Thailand. She said standing up is an important move forward.

“He didn’t realize the significance of what this means,” she said. “Being able to do something like that on his own gives him a little bit more independence and freedom to navigate his world.” 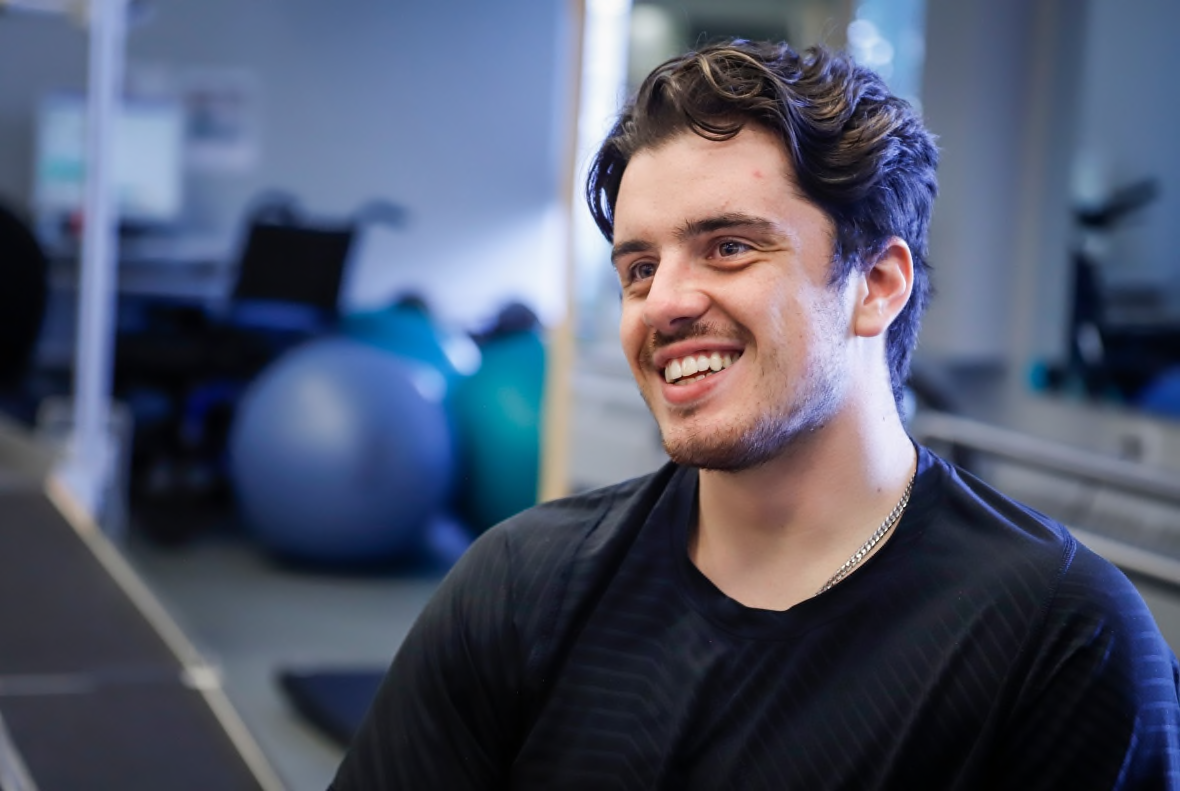 Straschnitzki says while he’s happy with the progress he’s made, he still has a long way to go. The Canadian Press, Jeff McIntosh

Nguyen said Straschnitzki might be able to step on the spot at some point, but the key is making enough progress to give him emotional lifts.

“For those of us who don’t live in that space, we forget what it feels like to be as tall as we are or be able to look at the world from a very different vantage point.” she said.

“For Ryan to be able to get up on his own and have that viewpoint, it would be a huge step for him mentally and emotionally.”

Straschnitzki didn’t tell his parents what he had done. They found out when they saw a short video he posted on Twitter earlier this month.

Tom Straschnitzki said his son didn’t think it was worth mentioning.

“It was pretty amazing and emotional. I was shocked more than anything else.”