Working out just five minutes daily via a practice described as “strength training for your breathing muscles” lowers blood pressure and improves some measures of vascular health as well as, or even more than, aerobic exercise or medication, new CU Boulder research shows. 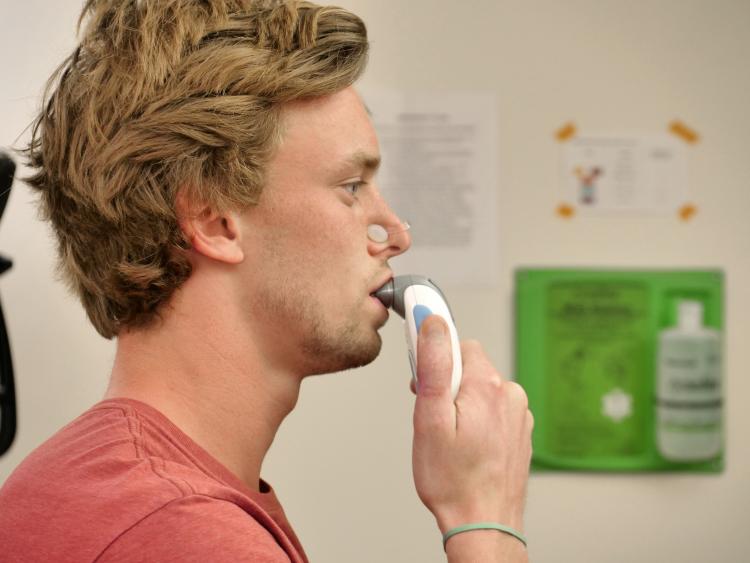 The study, published today in the Journal of the American Heart Association, provides the strongest evidence yet that the ultra-time-efficient maneuver known as High-Resistance Inspiratory Muscle Strength Training (IMST) could play a key role in helping aging adults fend off cardiovascular disease––the nation’s leading killer.

In the United States alone, 65% of adults over age 50 have above-normal blood pressure––putting them at greater risk of heart attack or stroke. Yet fewer than 40% meet recommended aerobic exercise guidelines.

“There are a lot of lifestyle strategies we know can help people maintain cardiovascular health as they age. But the reality is, they take a lot of time and effort and can be expensive and hard for some people to access,” said lead author Daniel Craighead, an assistant research professor in the Department of Integrative Physiology. “IMST can be done in five minutes in your own home while you watch TV.”

“It’s something you can do quickly in your home or office, without having to change your clothes, and so far it looks like it is very beneficial to lower blood pressure and possibly boost cognitive and physical performance.” Daniel Craighead, Postdoctoral researcher in Integrative Physiology.

Developed in the 1980s as a way to help critically ill respiratory disease patients strengthen their diaphragm and other inspiratory (breathing) muscles, IMST involves inhaling vigorously through a hand-held device which provides resistance. Imagine sucking hard through a tube that sucks back.

Initially, when prescribing it for breathing disorders, doctors recommended a 30-minute-per-day regimen at low resistance. But in recent years, Craighead and colleagues at the University of Arizona have been testing whether a more time-efficient protocol––30 inhalations per day at high resistance, six days per week––could also reap cardiovascular, cognitive and sports performance improvements.

For the new study, they recruited 36 otherwise healthy adults ages 50 to 79 with above normal systolic blood pressure (120 millimeters of mercury or higher). Half did High-Resistance IMST for six weeks; and half did a placebo protocol, in which the resistance was much lower. Participants didn’t know which group they were in.

When assessed after six weeks, the IMST group saw their systolic blood pressure (the top number) dip nine points on average, a reduction which generally exceeds that achieved by walking 30 minutes a day five days a week. That decline is also equal to the effects of some blood pressure-lowering drug regimens. 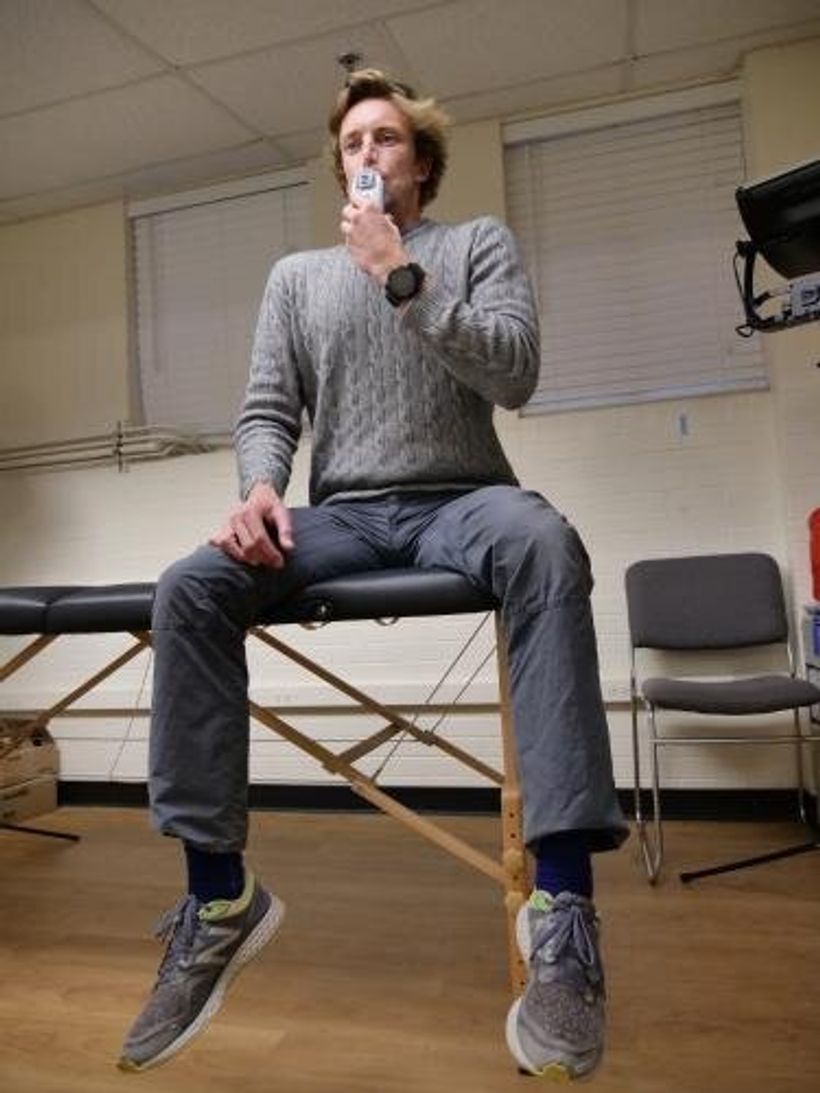 Tom Heinbockel demonstrating how to use a Power Breathe device, when he was a master’s student in the Integrative Physiology department in 2019. Photo by Casey A. Cass, CU Boulder

Even six weeks after they quit doing IMST, they maintained most of that improvement.

“We found not only is it more time-efficient than traditional exercise programs, the benefits may be longer lasting,” Craighead said.

The treatment group also saw a 45% improvement in vascular endothelial function, or the ability for arteries to expand upon stimulation, and a significant increase in levels of nitric oxide, a molecule key for dilating arteries and preventing plaque buildup. Nitric oxide levels naturally decline with age.

Markers of inflammation and oxidative stress, which can also boost heart attack risk, were significantly lower after people did IMST for six weeks.

And, remarkably, those in the IMST group completed 95% of the sessions.

“We have identified a novel form of therapy that lowers blood pressure without giving people pharmacological compounds and with much higher adherence than aerobic exercise,” said senior author Doug Seals, a Distinguished Professor of Integrative Physiology. “That’s noteworthy.”

The practice may be particularly helpful for postmenopausal women.

In previous research, Seals’ lab showed that postmenopausal women who are not taking supplemental estrogen don’t reap as much benefit from aerobic exercise programs as men do when it comes to vascular endothelial function. IMST, the new study showed, improved it just as much in these women as in men.

“If aerobic exercise won’t improve this key measure of cardiovascular health for postmenopausal women, they need another lifestyle intervention that will,” said Craighead. “This could be it.”

Preliminary results from the same group suggest IMST also improved some measures of brain function and physical fitness. And previous studies from other researchers have shown it can be useful for improving sports performance.

“If you’re running a marathon, your respiratory muscles get tired and begin to steal blood from your skeletal muscles,” said Craighead, who uses IMST in his own marathon training. “The idea is that if you build up endurance of those respiratory muscles, that won’t happen and your legs won’t get as fatigued.”

Seals said they’re uncertain exactly how a maneuver to strengthen breathing muscles ends up lowering blood pressure, but they suspect it prompts the cells lining blood vessels to produce more nitric oxide, enabling them to relax.

The National Institutes of Health recently awarded Seals $4 million to launch a larger follow-up study of about 100 people, comparing a 12-week IMST protocol head-to-head with an aerobic exercise program.

Meanwhile, the research group is developing a smartphone app to enable people to do the protocol at home using already commercially available devices.

They say the practice is not necessarily meant to replace exercise but can be a useful option for those who lack access to walking trails or recreation centers, have trouble doing aerobic activities due to health reasons or just want to add another tool to their blood-pressure-lowering toolbox.

In an editorial accompanying the journal publication, researchers not involved in the study called for more research on the myriad health benefits, including potentially mental health benefits, the practice may hold.

Those considering IMST should consult with their doctor first. But thus far, IMST has proven remarkably safe, they said.

“It’s easy to do, it doesn’t take long, and we think it has a lot of potential to help a lot of people,” said Craighead.