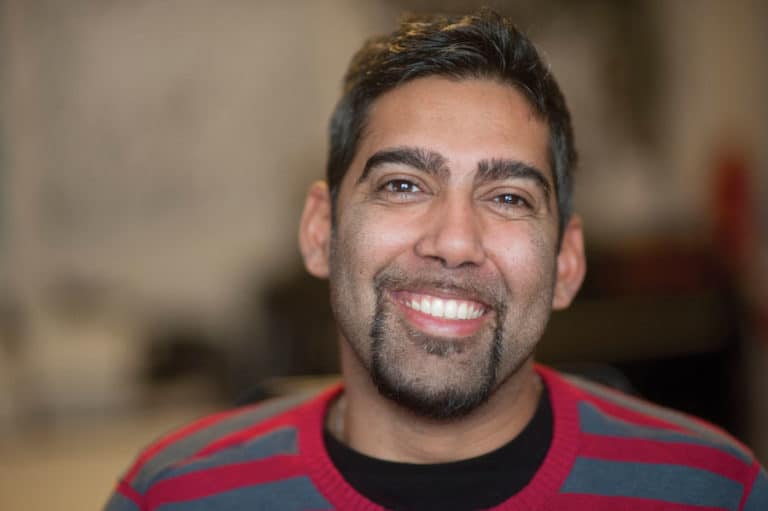 Jason DaSilva’s award-winning film, When I Walk, raised awareness of what it is like to live with primary progressive multiple sclerosis. Photo by Charlie Samuels

Award-winning filmmaker and 2014 New Mobility Person of the Year Jason DaSilva’s new documentary chronicles his quest to understand why he got primary progressive multiple sclerosis. The 30-minute film Predicting My MS debuted Feb. 23 on the PBS science series NOVA.

DaSilva used the pause brought on by the pandemic to reach out to family members, doctors and researchers to better understand the disease and any possible causes in his personal history. The result is a fast-moving, informative and optimistic watch for anyone interested in MS or DaSilva’s work. “I went through every possibility and left no stone unturned,” he says.

DaSilva’s MS is unusually agressive, and he chronicled its progression in his 2013 documentary, When I Walk. Since then, he has directed more than a dozen documentaries and short films.

His 2018 documentary, The Disability Trap, chronicled the agonizing choices he and many others with disabilities face because of state-to-state differences in Medicaid. His dilemma was stark: Move to a Texas nursing home to be closer to his young son or keep living independently in New York City with excellent attendant care but no direct access to his son. He opted to remain in New York City, and his experience from the ordeal only motivated him more. “I want to keep telling the stories of other people with disabilities that are being affected by Medicaid,” he says. “That people with disabilities who are on Medicaid have to be locked in by where they live is crazy to me.”

In 2021, DaSilva’s nonprofit launched the AXS Film Fund to support creators of color with disabilities. The team behind Fire Through Dry Grass, the upcoming documentary from New Mobility’s 2021 People of the Year, was one of the fund’s first five award recipients. DaSilva is currently producing When They Walk, the final film in a trilogy focusing on his life with MS.

Navigating Rio with disabilities can be tough
Two discus athletes from Alberta headed to Japan for Paralympics preparati...
Carbon fiber AFO-SMO orthoses improved gait in patient with cerebral palsy
Community and Social Services contacts, including AISH and PDD
Dyson award-winning orthosis counteracts hypertonia in children with Cereb...
How Canada is harming its most vulnerable citizens