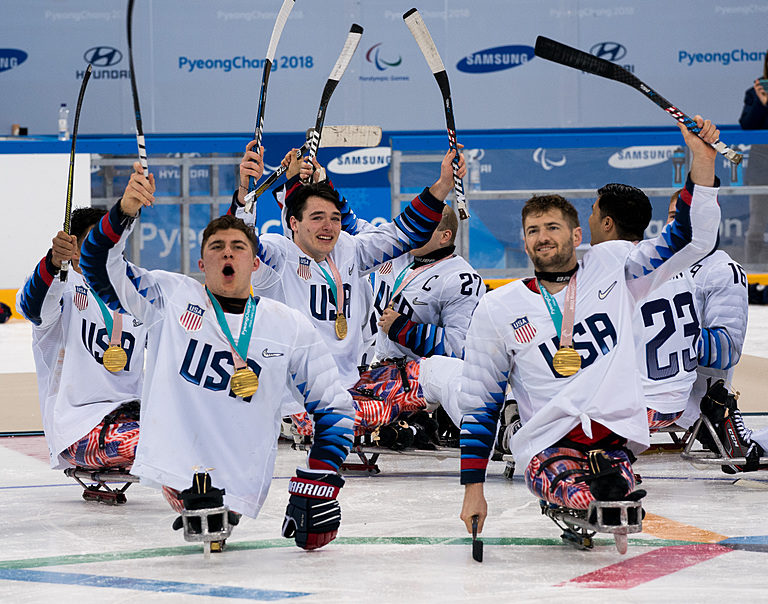 Players of the US Ice Hockey team celebrate after winning 2:1 in the Gold Medal Game against Canada at the 2018 Paralympics. Photo: Bob Martin for OIS/IOC.

They won in Vancouver. They won in Sochi. They won in PyeongChang. Team USA players and coaches have built the best sled hockey team in the world and hope to win an unprecedented fourth-consecutive gold medal at the Beijing Paralympics. That journey starts March 4, at 9:05 pm PT, as USA opens group play against archrival Canada, a rematch of the 2018 gold medal game. Here’s a closer look at a U.S. team that has every intention of keeping its crown.

Brody Roybal is one of the more experienced players on Team USA sled hockey, a squad that features 11 returning Paralympians and six first-timers. He was 15 years old when he helped the U.S. win gold at the 2014 Sochi Paralympics.

“Man, that was a dream come true,” says Roybal. “I had always looked up to the guys on the team and knew that I wanted to be at that stage with them, and I just worked really, really hard to get to that point. I had trained every day before school, during school and after school. I didn’t live the life of a normal 15-year-old.” 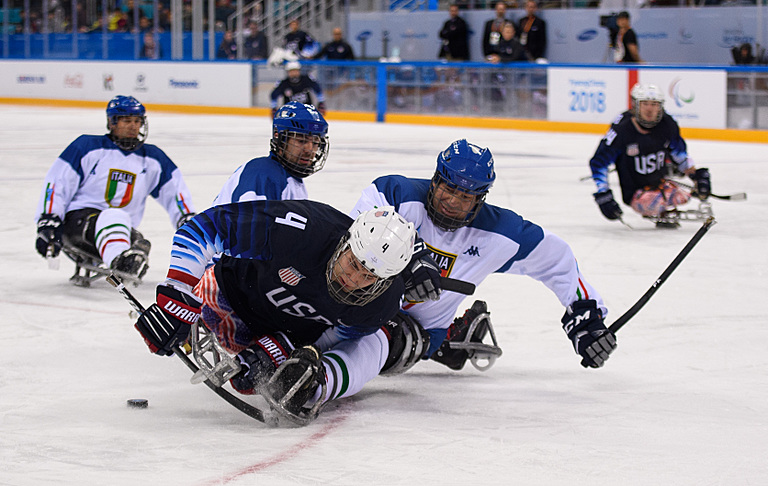 Brody Roybal and Gian Luca Cavaliere of Italy battle for the puck during the the PyeongChang Paralympics. Photo: Thomas Lovelock for OIS/IOC.

Spinal cord untethering surgeries when he was 19 and 20 caused him to lose strength and mobility in his hips and legs. He started using arm crutches or a wheelchair, and he then began looking into adaptive sports and found sled hockey.

Once he did, he was all in. He spent four years on the U.S. development team before being called up to the national team. “At the time, we would have camps once a month, and then we would play Canada up in Montreal once a year for a three-game series. I thought that was awesome — and it was — but it’s totally different being on the national team,” he says.

He was first named to the national team in 2018, after the PyeongChang Paralympics. Throughout his time on the development team and now on the national team, he has scheduled his life around the sport. He works out in the gym six days a week and has been skating two hours a day with the team most days in the months leading up to the Beijing games. Everyday decisions such as what he eats revolve around hockey and staying in elite shape. “It was a lot of hard work and a lot of sacrifice to get to this point, but every second has been worth it,” he says. 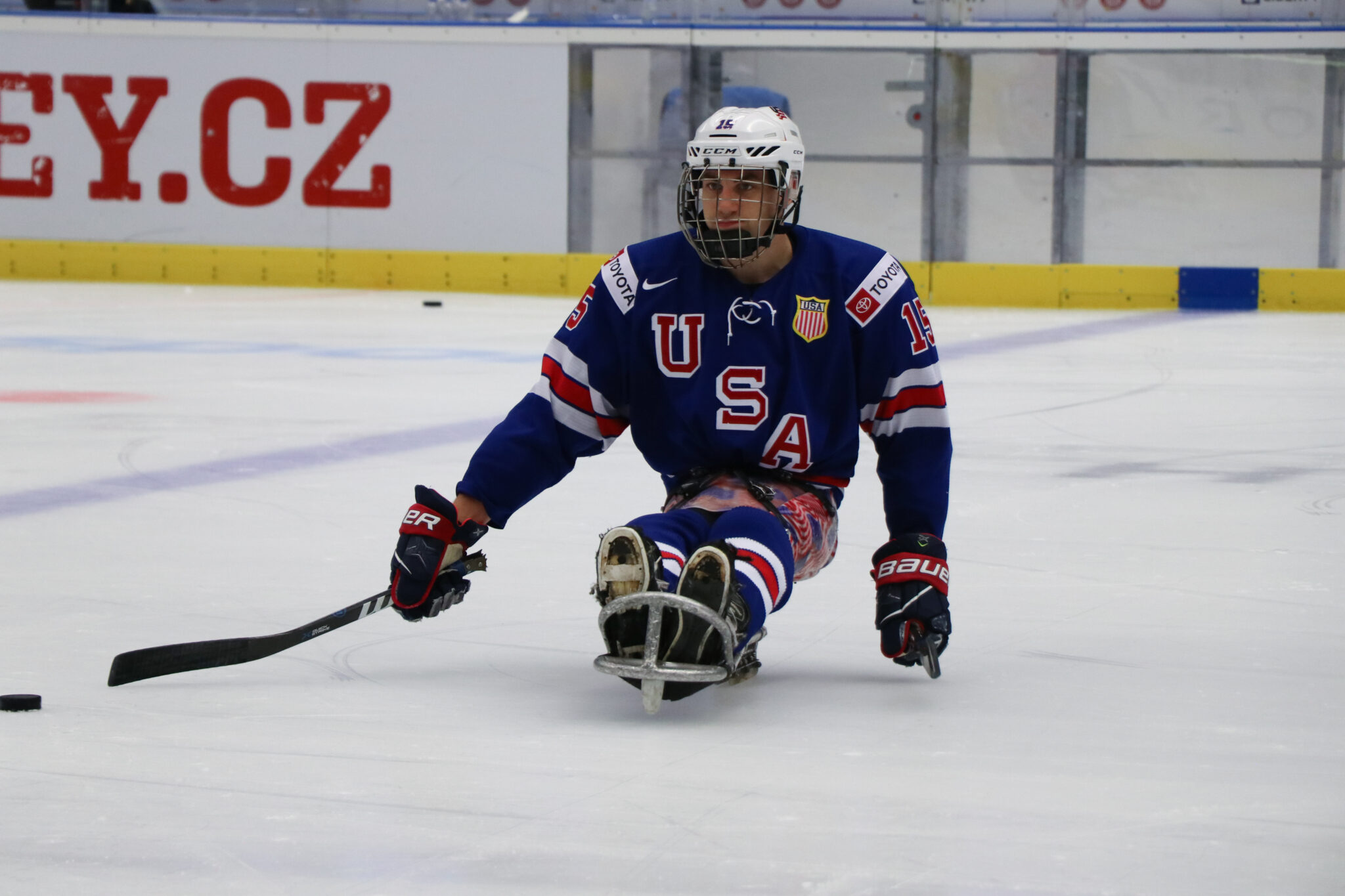 Kyle Zych, who won gold with Team USA at the 2019 World Championships, will be competing in his first Paralympics.

USA sled hockey is coached by David Hoff, who grew up playing and then coaching what he calls “stand-up hockey” in North Dakota. Hoff, who doesn’t have a disability, joined USA Hockey’s sled hockey program in 2011 after being recruited by then-head coach Jeff Sauer. He served as an assistant coach for the national team from 2016 to 2018 before being named head coach following the PyeongChang Paralympics.

“Really, the game is the same,” he says when asked to compare stand-up hockey and sled hockey. “There are some small differences, such as a player not being able to skate backward and things like that but, really, for the most part, all of the skills and concepts are very similar.”

He has learned to adapt and adjust his coaching strategies to fit with the different disabilities that each player has. Hoff gives the example of Roybal using a shorter sled than other players since he does not need room for legs. The custom sled allows Roybal a tighter turn radius and more options for attacking opposing defenses. 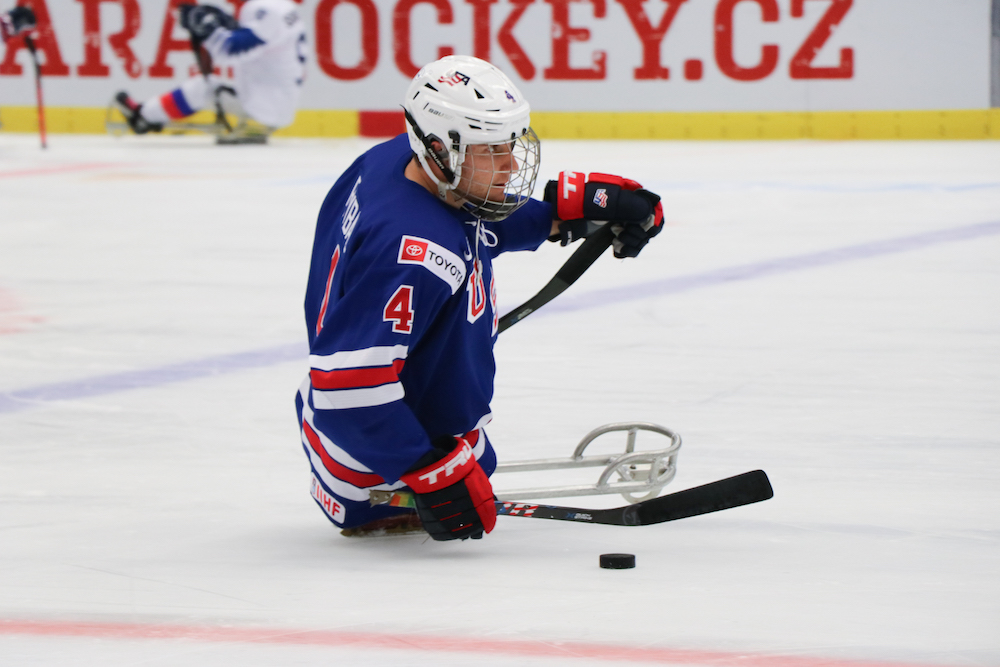 Roybal’s shorter sled allows him more maneuverability than players whose sleds are long enough to accommodate their legs.

Hoff sees the combination of experience — players like Roybal and Rico Roman will be playing in their third Paralympics — and the unique excitement of first-time Paralympians like Zych as an asset. Hoff says that Roman, the oldest team member at 41, has a “fatherly” influence on the younger players. Zych credits the more experienced players on the team with teaching him about the game and how to excel as an athlete.

“Seeing the professionalism those guys carry on and off the ice, just knowing what to say, knowing what to do, how much time we’ve put into this, it really is a full-time professional environment that those guys carry themselves in,” Zych says. “It rubs off on everybody else, and it just makes this team that much better, that much more dedicated and willing to sacrifice for each other. I’ve learned a lot from those guys for sure.”

The preparation for the Beijing 2022 Paralympics has taken place amid the ongoing COVID pandemic. “It’s been something we’ve had to deal with,” says Roybal. “It’s been a little bit difficult with training, but we’ve made the best out of it. Our team has to overcome adversity all the time, so it’s just something we’ve dealt with and made the best out of.”

Hockey is a full-time job for the 17 players, who all receive funding from USA Hockey, and they have been limiting interactions with people beyond their family and close circle of friends. Roybal says the biggest concern in the run-up to the games has been avoiding infection, which would limit, or potentially prohibit, a player from participating in the Beijing games.

As with the Beijing Winter Olympics, there will be no spectators at the Paralympics. No American friends and family, not even Chinese spectators. “Obviously, it takes away a little bit of the excitement from it at that point for sure,” says Hoff. “You want to perform in front of a lot of people, and sled hockey has grown so much.” 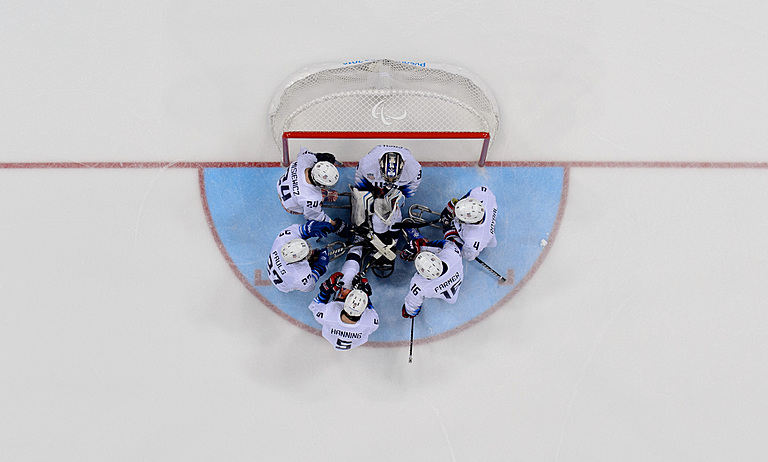 Team USA players huddle together before a gold medal game against Canada at the PyeongChang Paralympics. Photo: Joel Marklund for OIS/IOC.

In the last World Championships before the pandemic hit, the team played the host country, the Czech Republic, in Ostrava in front of 10,000 people, an environment that this year’s Games will not replicate. But despite the absence of fans and spectators, Hoff says the team still approaches the Games with the same goal and focus. Fans in the stands or not, it’s all about coming away with a gold medal.

Whatever the atmosphere in Beijing, the team still knows fans will be watching back home. There is a United States Olympic and Paralympic Committee-hosted watch party planned in Park City, Utah, as well as other regional gatherings of friends and families to watch. Zych is admittedly disappointed he won’t have friends and family in the stadium for his first Paralympics, but they have told him they will watch every game live no matter when it is on.

Eleven months later, when the two teams met in the gold medal match of the 2018 Paralympics, Canada led 1-0 after the first period and held that advantage until the final minutes of the final period. While still trailing with a minute left to go in the game, the U.S. pulled the goalie to put an extra skater on the ice. An empty-net shot by Canada bounced off the post, and Declan Farmer gathered the puck and scored the tying goal with 36 seconds left. He then scored the game- and gold-medal-winning goal three and a half minutes into overtime.

“We’ve had a rivalry with Canada for years. They’re a great team, and we’re really excited to play them,” says Roybal, who was named Para Ice Hockey MVP of the 2018 Paralympics. “I think it’s really cool that we get to play them in our first game over there. I think it’s going to be a great hockey game, but it’s just another team that we have to play on our journey to that gold medal game.”

Workplace mHealth program shows improved step count, weight loss
Update: Orthotic care and physical therapy for DMD
Despite a first-ever ‘Right-to-repair’ law, there’s no easy fix for wheelc...
Youth in transition to adult care
The horse is the therapist
Mobility is the most important measure of health