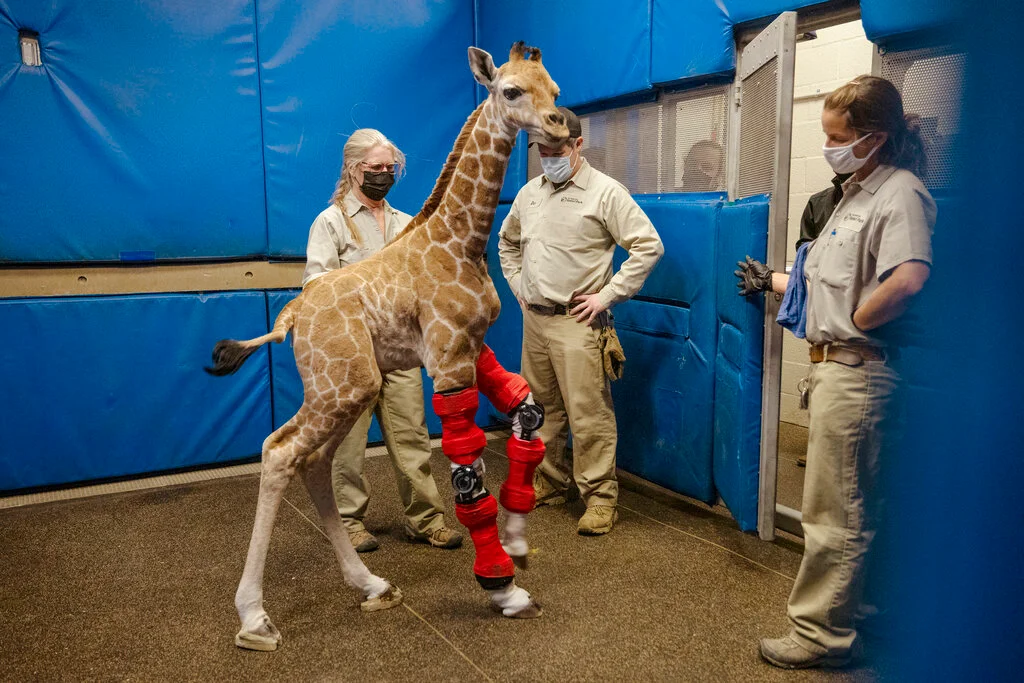 Msituni, seen here in a pair of braces, was born with an unusual disorder that caused her legs to bend the wrong way. San Diego Zoo Wildlife Alliance. The Associated Press

Over the past three decades, Ara Mirzaian has fitted braces for everyone from Paralympians to children with scoliosis. But Msituni was a patient like none other — a newborn giraffe.

The calf was born Feb. 1 at the San Diego Zoo Safari Park in Escondido, north of San Diego, with her front limb bending the wrong way. Safari park staff feared she could die if they didn’t immediately correct the condition, which could prevent her from nursing and walking around the habitat.

But they had no experience with fitting a baby giraffe in a brace. That proved especially challenging given she was a 178-centimetre newborn and growing taller every day. So they reached out to experts in orthotics at the Hanger Clinic, where Mirzaian landed his very first animal patient.

“It was pretty surreal when I first heard about it,” Mirzaian told The Associated Press this week during a tour to meet Msituni, who was strutting alongside the other giraffes with no troubles. “Of course, all I did was go online and study giraffes for like 24/7 until we got out here.”

Zoos increasingly are turning to medical professionals who treat people to find solutions for ailing animals. The collaboration has been especially helpful in the field of prosthetics and orthotics. Earlier this year, ZooTampa in Florida teamed up with similar experts to successfully replace the beak of a cancer-stricken great hornbill bird with a 3D-printed prosthetic.

The Hanger team in California had fit orthotics for a cyclist and kayaker who both went on to win medals at the 2016 Paralympics in Brazil and customized a brace for a marathoner with multiple sclerosis who raced in seven continents.

In 2006, a Hanger team in Florida created a prosthetic for a bottlenose dolphin that had lost its tail after becoming tangled in ropes from a crab trap. Their story inspired the 2011 movie Dolphin Tale.

But Msituni was a definite learning curve for all, including Matt Kinney, a senior veterinarian for the San Diego Zoo Wildlife Alliance in charge of the giraffe’s case.

“We commonly put on casts and bandages and stuff. But something that extensive, like this brace that she was provided, that’s something we really had to turn to our human [medicine] colleagues for,” Kinney said.

Msituni suffered from hyperextended carpi — wrist joint bones in giraffes’ front limbs, which are more like arms. As she overcompensated, the second front limb started to hyperextend as well. Her back leg joints were also weak, but were able to be corrected with specialized hoof extenders.

Given that she weighed more than 55 kilograms at birth, the abnormality was already taking its toll on her joints and bones.

While the custom braces were being built, Kinney first bought post-surgery knee braces at Target that he cut up and re-sewed, but they kept slipping off. Then Msituni wore medical-grade braces for humans that were modified for her long legs. But eventually Msituni broke one. 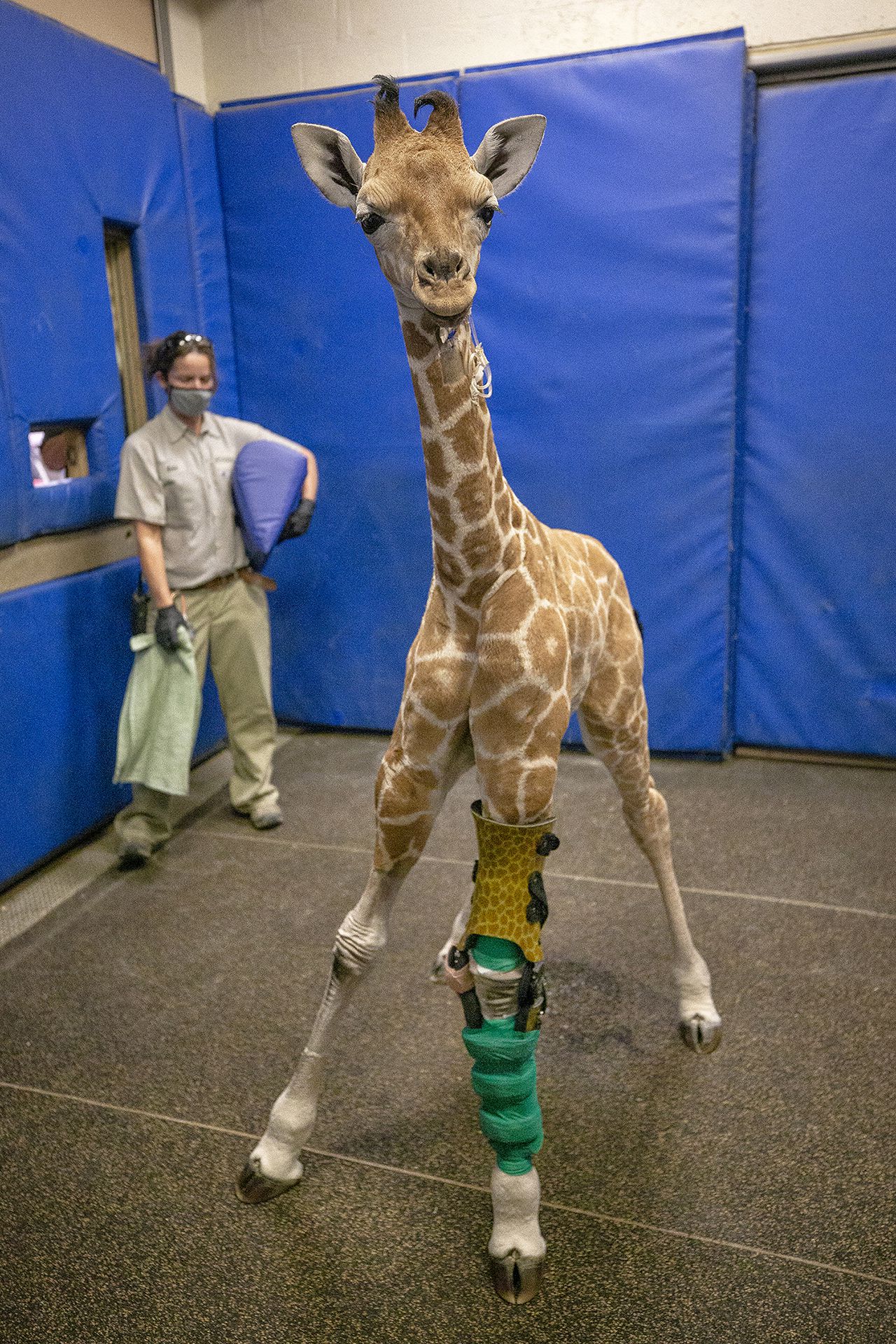 This Feb. 18, 2022, image released by the San Diego Zoo Wildlife Alliance shows Msituni, a giraffe calf born with an unusual disorder that caused her legs to bend the wrong way, at the San Diego Zoo Safari Park in Escondido, north of San Diego. Using cast moldings of the giraffe’s legs, a carbon graphite brace features the animal’s distinct pattern of crooked spots to match her fur. In the end, Msituni only needed one brace. The other leg corrected itself with the medical grade brace. Tammy Spratt, San Diego Zoo Wildlife Alliance via AP

For the custom braces to work, they would need to have a range of motion but be durable, so Hanger worked with a company that makes horse braces.

Using cast moldings of the giraffe’s legs, it took eight days to make the carbon graphite braces that featured the animal’s distinct pattern of crooked spots to match her fur.

“We put on the giraffe pattern just to make it fun,” Mirzaian said. “We do this with kids all the time. They get to pick super-heroes, or their favourite team and we imprint it on their bracing. So why not do it with a giraffe?”

In the end, Msituni only needed one brace. The other leg corrected itself with the medical-grade brace.

When they put her under to fit the custom brace, Mirzaian was so moved by the animal’s beauty, he gave her a hug.

“It was just amazing seeing such a big, beautiful creature just laying there in front of me,” he said.

After 10 days in the custom brace, the problem was corrected.

All told, Msituni was in braces for 39 days from the day she was born. She stayed in the animal hospital the entire time. After that, she was slowly introduced to her mom and others in the herd. Her mom never took her back, but another female giraffe has adopted her, so to speak, and she now runs along like the other giraffes.

Mirzaian hopes to hang up a picture of the baby giraffe in her patterned brace so the kids he treats will be inspired to wear theirs.

“It was the coolest thing to see an animal like that walk in a brace,” he said. “It feels good to know we saved a giraffe’s life.”