New guidelines from the American Academy of Pediatrics offer important guidance for parents on how to keep their babies safe during sleep. 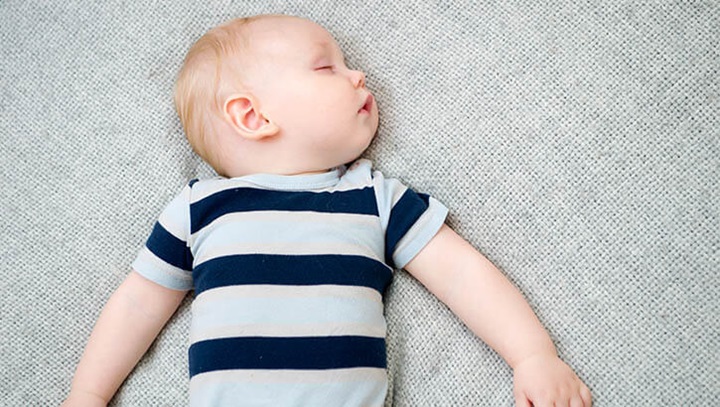 A baby sleeps on his back in a crib that just has a fitted sheet on it and nothing more. To prevent SIDS, always place babies on their backs for naps and at nighttime with no extras in the sleeping space – no toys, bumpers, or blankets. Health.mil

The American Academy of Pediatrics has updated its safe-sleep guidelines for infants for the first time in more than five years, emphasizing that babies should sleep on their backs on flat, level surfaces to reduce their risk of Sudden Unexpected Infant Death Syndrome (SIDS).

It’s estimated that there are 3,500 sleep-related infant deaths in the United States each year. Many of those deaths are preventable, and the authors of the new guidelines are urging parents to take simple steps to help keep their children safe.

“The best way to protect your baby while they are asleep is to follow these guidelines,” said UVA Children’s Rachel Moon, MD, the lead author of the new guidelines, which come from the AAP’s Task Force on Sudden Infant Death Syndrome and the AAP’s Committee on Fetus and Newborn. “When you place your baby for sleep, they should be on their back in a crib, portable crib or bassinet that meets Consumer Product Safety Commission standards, and there should be nothing but the baby in the crib.”

The United States made great progress in preventing infant deaths during the 1990s, after a public-education campaign urged parents to put their babies to sleep on their backs. But the decline in deaths has been stalled for more than 20 years. Safe-sleep experts say more can be done, and hope the new guidelines spur fresh action.

The recommendations, published online today in the scientific journal Pediatrics, include:

In addition, parents are advised that awake “tummy time” is important to facilitate infant development. Babies should not be left to sleep on their stomachs, however.

“These recommendations are consistent with prior guidelines, with some updates based on new information. We want to reach new parents, grandparents and other infant caregivers so that everyone is aware about how best to keep their baby safe,” said UVA Health’s Fern Hauck, MD, MS, a member of the AAP’s Task Force on SIDS. “We also want parents to know that it is important to speak to your baby’s doctor about the guidelines and have an open discussion so that you can share your thoughts and make the best choices in caring for your baby.”

A full list of the AAP’s safe-sleep recommendations is available online. The guidelines are accompanied by a technical report that details the evidence used in developing the recommendations.

New online tool predicts individual risks and benefits of joint replacemen...
The virtual human is here — how much are you willing to share about yourse...
The hidden extra costs of living with a disability
Autonomous wheelchairs arrive at Japanese airport
Recent trends favor use of bracing for knee OA
Canada’s health-care wait times hit new record high, again