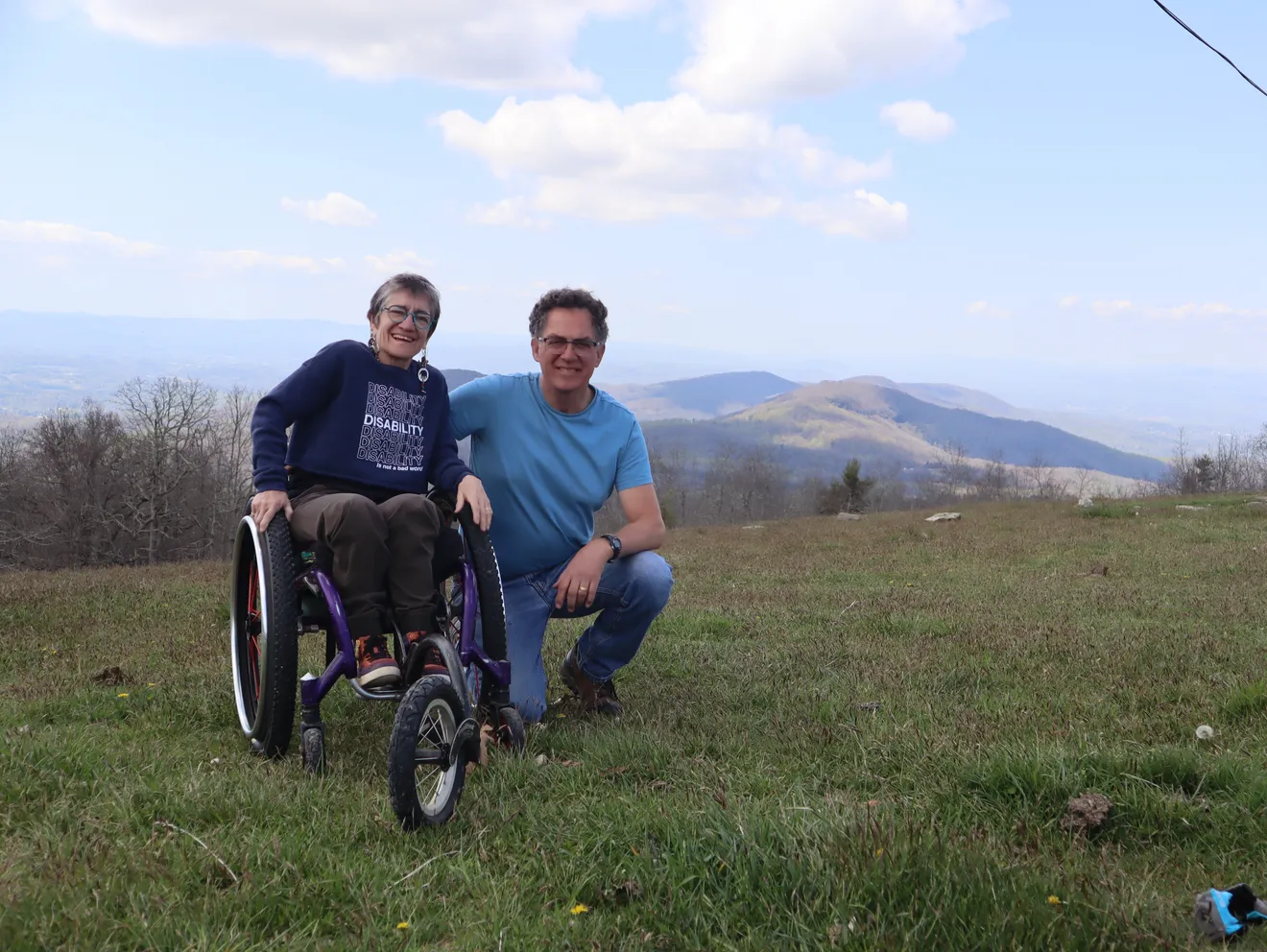 On a spring morning, Terry Schupbach-Gordon found herself outside of a locked gate. On the other side was a gravel road that leads to a mountaintop with panoramic views. Other hikers could slip through a narrow gap beside the gate, but Terry and her husband, Toby Gordon were left evaluating their options. Terry can’t walk, but she can crawl. So, she could get out of her off-road wheelchair and crawl through. Then, Toby could hoist the chair up and over and they could get on with their hike.

That morning, it didn’t come to that because they were meeting with trail managers who could open the gate. So, they started up Bearwallow Mountain, part of Conserving Carolina’s trail network in the Hickory Nut Gorge. The road is steep, but as a team Terry and Toby had it covered. She wheeled her chair, which comes with mountain bike tires and a FreeWheel attachment that converts it into a off-road trike. Where the road was too steep for Terry alone, Toby pushed. When they needed to rest, they rested.

Terry is an artist, storyteller, teacher, mother, grandmother, and disability rights advocate who loves to hike. If you’re not used to seeing people like her on mountaintops, she says, it’s time to revamp your expectations. Adaptive equipment has come a long way in just the last decade, whether it’s designed for hiking, climbing, biking, kayaking, or snow sports. But it’s not just about equipment, Terry says. We also need to change how people think about access—about who gets to go where.

When she was born almost 70 years ago, Terry says, you weren’t supposed to see people like her, period. Not on trails, not in school, not at work, not on stage. Terry was born with spina bifida, a spinal cord condition. For much of her life she could walk, off and on, with a lopsided gait using braces. Other times, she used a wheelchair.

As a child in the 1950s, Terry had no legal right to go to school. Her parents were told to send her to an institution called the “spastics’ home.” But her mother wasn’t having it and insisted that she would go to public school, which she did.

“Fortunately, I grew up in a family who fell in love with my body before I even knew I had one,” Terry says. “My mother thought I was the best thing since sliced bread. I’ll give it to Mama, no matter how many surgeries I had, it was never to fix it. At that time, most people with spina bifida went through surgeries to get you as ‘normal’ as possible rather than get you as functional as possible.”

As a little girl, Terry admired the girl in advertisements for Sunbeam bread. On a billboard in her Kentucky town, she saw the pretty blonde Sunbeam girl pumping a swing with her strong legs, braids flying. Terry was not that girl — not blonde, no braids, no strong legs.

In the summers, Terry often had surgeries and afterwards wore casts. But she loved to swim. So her mother would put Sunbeam bread bags over her casts and seal them with duct tape. At a nearby lake, Terry would crawl into the water until she could float and then swim.

One day in the lake, she looked down at her legs and saw the Sunbeam girl — and herself. “I recognized that she and I were not the same kind of beautiful but that water lifted both of us. Because water is about buoyancy, and buoyancy is about who you are as a human body,” she says. “From that point on, I never questioned whether she was more beautiful than I was.” Terry saw that she was also beautiful—a loved and joyful body, playing in a lake.

Decades later, Terry was teaching at the College of Art and Design in Minneapolis. Toby was an artist who came to Minnesota after discovering that New York City didn’t suit him. He was renting an art studio and he was handy at fixing things, including an antique letterpress that the college had adopted. Terry and Toby bonded over printmaking and literature. “Then we found that we had more in common,” Terry says.

Now, they’ve been married for 35 years. They have two children and one grandchild and they love spending time outdoors with their family. Toby is a mountain biker and birder, while Terry is passionate about picnics and gardening. They love hiking near their home in Tobaccoville, NC or their cabin in Old Fort. 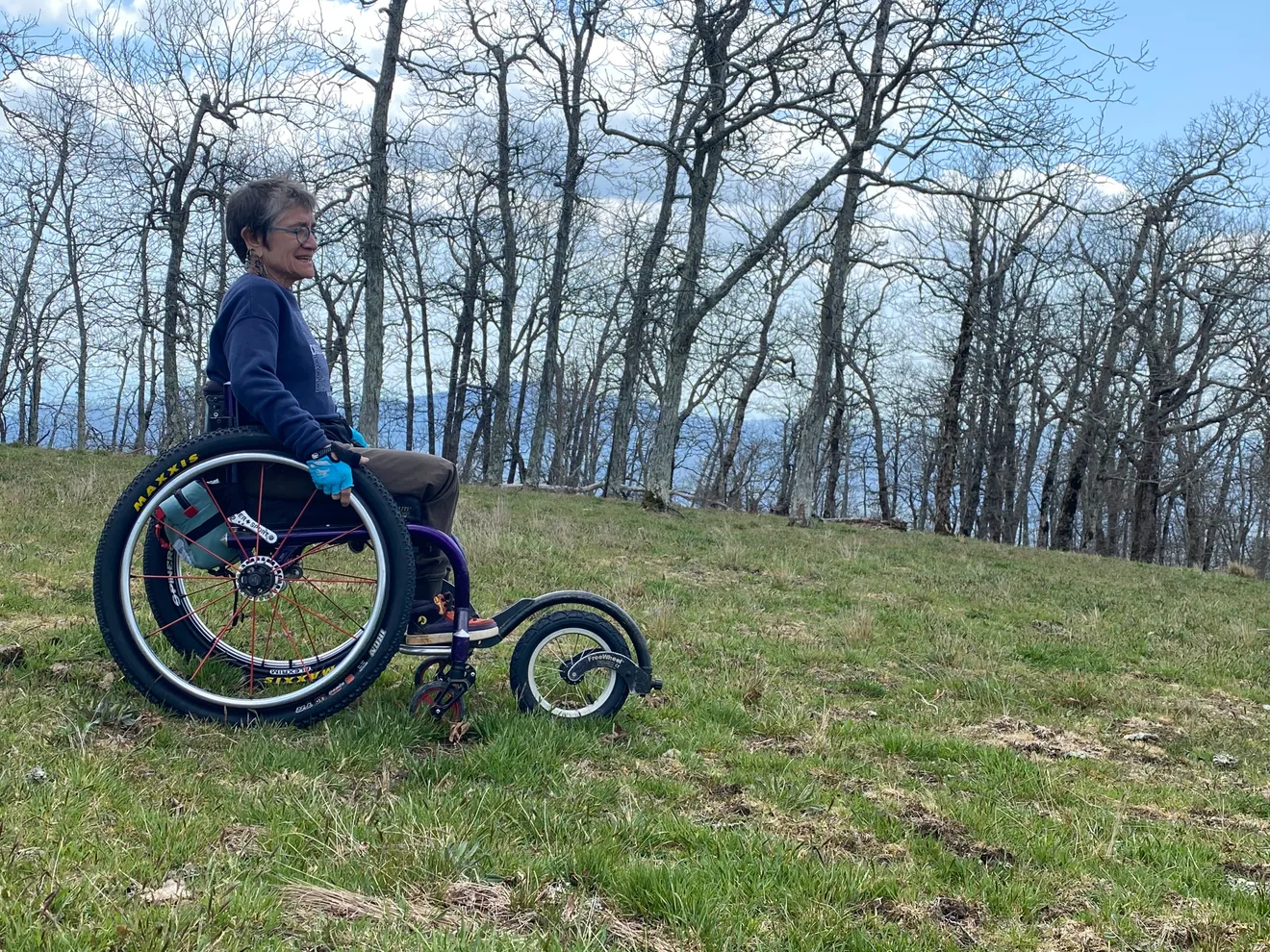 When they reached the top of Bearwallow Mountain, views encircled the grassy summit and a grove of wind-stunted oak trees reached their branches over a boulder field. Terry said, “I’m out here. I’m looking at things that seem right in their space and it’s beautiful. And I can do it.”

More people can have outdoor adventures because of volunteers with Catalyst Sports like Matthew “Kirby” Kirby. Professionally, Kirby is a prosthetist orthotist at Carepartners in Asheville — a job where he equips people with devices such as artificial limbs or braces.

More people can have outdoor adventures because of volunteers with Catalyst Sports like Matthew “Kirby” Kirby. Professionally. Kirby is a prosthetist orthotist at Carepartners in Asheville — a job where he equips people with devices such as artificial limbs or braces.

In the office, his patients would talk about things they wanted to do or activities they missed. As a mountain biker, Kirby could relate to their passion for sports and adventure. But his work in a medical setting felt clinical. Volunteering sparked a more personal connection.

Catalyst Sports is a nonprofit that creates opportunities for adaptive adventure sports in the Southeast. Kirby now coordinates the Asheville chapter’s mountain biking program (one of two local programs, along with climbing).

The athletes ride adaptive trikes, usually at DuPont State Recreational Forest or Kanuga Bike Park. Some use e-assist technology to move uphill faster, so they can cover more ground and enjoy longer downhills. As mobility devices, their adaptive bikes are permitted in settings where e-bikes aren’t otherwise allowed. 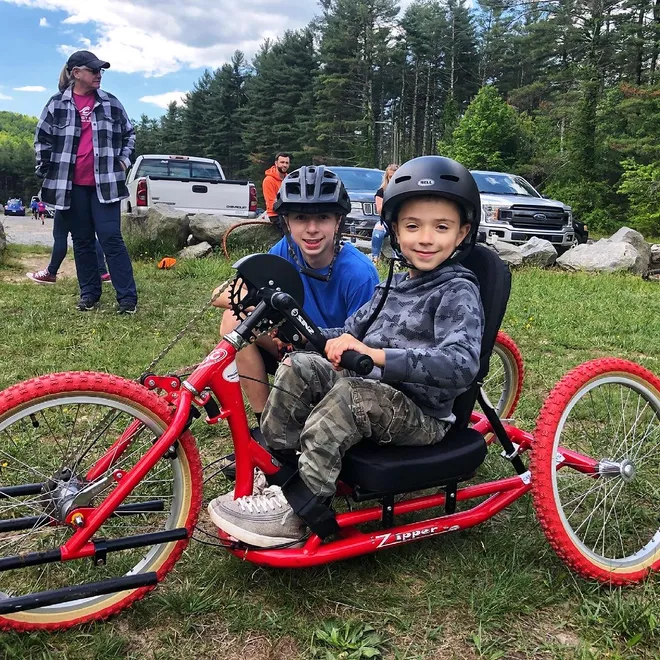 An adaptive mountain biker getting ready for an outdoor adventure. Photo courtesy of Catalyst Sports

“When I started volunteering with Catalyst I got to see people with disabilities and even some of my patients out enjoying things that I’m passionate about,” Kirby says. “I get a sense of accomplishment and satisfaction in seeing that access for people who wouldn’t necessarily have access without the equipment we provide.”

He says, “We’re just looking to keep accessing terrain and expanding possibilities for everybody here in Western North Carolina.

Trail managers are thinking about access too. Not every trail can be passable in an off-road wheelchair. And sometimes, the need to fence in livestock or prevent motor vehicle use can result in barriers to access. But, with advances in adaptive recreation, groups like Conserving Carolina are challenged to think in new ways about trails.

“We see greenways as one important way to expand access, and we’re also exploring how we can improve access on other kinds of trails, like hiking trails and blueways,” says Conserving Carolina’s assistant director, Rebekah Robinson.

Conserving Carolina has helped to create or expand five local greenways including the Cane Creek, Oklawaha, and Vaughn Creek Greenways; the Estatoe Trail; and the future Ecusta Trail, a 19-mile rail trail that will connect Hendersonville and Brevard.

“Greenways can be a gateway drug,” Terry says. Getting out on those paths gets you thinking about more places you want to explore.

Conserving Carolina is currently surveying the accessibility of its hiking trails, so they can share information about features like gates, steps, or stream crossings. That way, people of varying abilities can decide whether they want to go for it. The nonprofit is also looking at ways to improve accessiblity at put-ins along the French Broad River. And where they’re managing land with wider trails or old roads, they now see potential to encourage adaptive recreation. 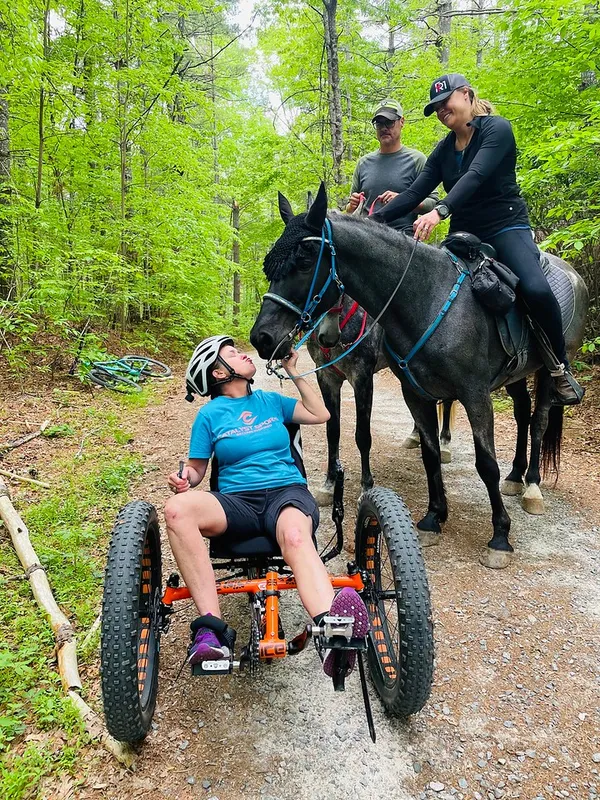 Conserving Carolina also launched the Flying Squirrel Outdoor Challenge last year — a flexible challenge that can be tailored to a range of abilities and interests.

“The outdoors is for everyone,” says Robinson. “We want to make sure that we’re providing opportunities for all kinds of people to enjoy the places we’re working to protect.”

You might be the parent of a child like Terry, who is born with a disability. You might be a veteran who loses a limb. You could be an athlete injured while pursuing your passion. Your life could be changed by a car crash. Or, you might grow older and find that walking up rugged trails is no longer possible for your body.

If any of that is true for you, Terry says, the mountains may still be calling.