New technology could lead to treatments for osteoarthritis. 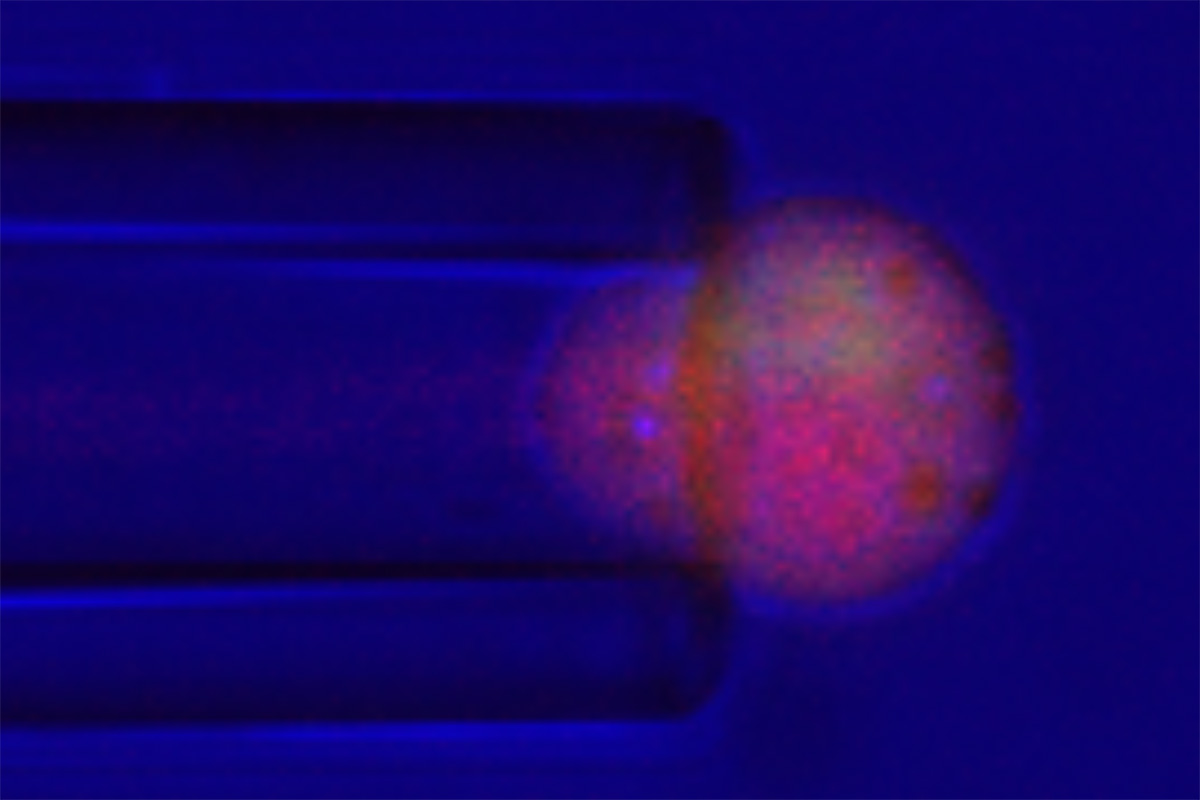 Researchers at Washington University School of Medicine in St. Louis have engineered cartilage cells to release an anti-inflammatory drug in response to stresses such cells undergo when they are compressed during weight bearing and movement. Here, the cell, called a chondrocyte, is stimulated with a very small glass pipette, about 1/5 the diameter of a human hair. When these cells undergo compression, they release the drug that combats inflammation. GUILAK LAB

Working to develop new treatments for osteoarthritis, researchers at Washington University School of Medicine in St. Louis have genetically engineered cartilage to deliver an anti-inflammatory drug in response to activity similar to the bending of a knee or other motions that put stress on joints.

Among the early symptoms of osteoarthritis is pain in response to such movements — motions that involve the so-called mechanical loading of a joint. Joint pain that accompanies bending or lifting can make it difficult to perform normal activities. But by altering genes in cartilage cells in the laboratory, the researchers have been able to program them to respond to the mechanical stress associated with movement and weight-bearing by producing a drug to combat inflammation.

The study is published online Jan. 27 in the journal Science Advances.

“Drugs such as ibuprofen and naproxen that ease joint pain and lower systemic inflammation are the main treatments for osteoarthritis pain, but there are no therapies that actually prevent damage in the joints of patients with this debilitating form of arthritis,” said senior investigator Farshid Guilak, PhD, the Mildred B. Simon Professor of Orthopaedic Surgery. “We’ve developed a new field of research called mechanogenetics, where we can engineer cartilage cells to respond to the mechanical loading of the joint. Every time cells are under that stress, they produce an anti-inflammatory, biologic drug to reduce inflammation and limit arthritis-related damage.”

With his team, Guilak, a co-director of the Washington University Center of Regenerative Medicine and director of research at Shriners Hospitals for Children — St. Louis, first conducted experiments in the lab using cartilage cells from pigs to figure out how those cells sense when they are being mechanically stressed.

“Studying these cells in the lab, we were able to identify key pathways in the cells that respond to stress from loading and the gene circuits in cartilage that are activated by mechanical loading,” said co-first author Robert J. Nims, PhD, a postdoctoral researcher in Guilak’s laboratory.

Like the touch sensor on a smartphone, cartilage cells sense when stress is being applied, and the inflammation associated with the excessive stress of arthritis causes cartilage to break down. The cells developed in these experiments, however, responded to that stress by secreting an anti-inflammatory drug that blocked cartilage damage.

“We altered snippets of DNA in the cells to tell them to do something different than normal when they sense a load,” Guilak said. “That is, to make an arthritis-fighting drug.”

“It’s kind of like turning on a light,” said co-first author Lara Pferdehirt, a biomedical engineer and graduate research assistant in Guilak’s lab. “With a light, you flip a switch, and a lightbulb turns on. But in this case, the switch is the mechanical loading of a joint, and the bulb is the anti-inflammatory drug.”

The cells were engineered to release interleukin-1 receptor antagonist — a drug called anakinra (Kineret) that’s used to treat rheumatoid arthritis and shows promise for treating post-traumatic osteoarthritis that occurs following joint injury. Prior studies of the drug in patients with osteoarthritis have shown it to be safe but ineffective when only injected into a joint one time. Guilak believes that is because to work well, the drug must be released in arthritic joints over longer periods, while mechanical loading is occurring.

“This drug doesn’t seem to work unless it’s delivered continuously for years, which may be why it hasn’t worked well in clinical trials involving patients with osteoarthritis,” he said. “In our experiments in cells in the lab, we used existing signaling systems in the cartilage cells that we engineered so that they would release the drug whenever it’s needed. Here, we are using synthetic biology to create an artificial cell type that we can program to respond to what we want it to respond to.”

In addition to reducing inflammation in arthritic joints, having specific cartilage cells deliver the drug only when and where it’s needed should make it possible to avoid side effects associated with long-term delivery of a strong anti-inflammatory drug to the entire body. Those side effects can include stomach pain, diarrhea, fatigue and hair loss.

Guilak’s team plans to use the same technique to alter other types of cells to make different drugs.

“We can create cells that automatically produce pain-relieving drugs, anti-inflammatory drugs or growth factors to make cartilage regenerate,” Guilak said. “We think this strategy could be a framework for doing what we might need to do to program cells to deliver therapies in response to a variety of medical problems.”