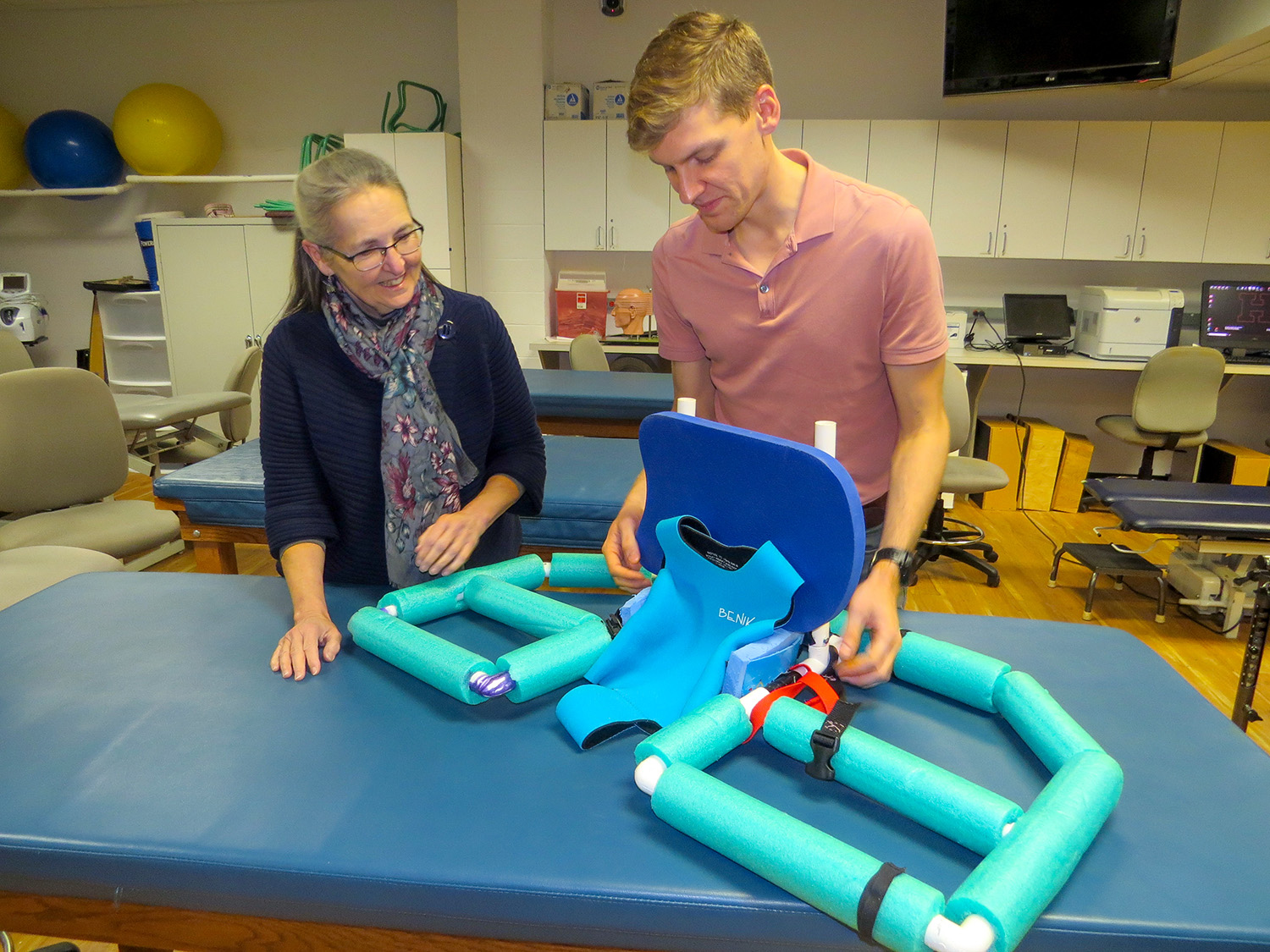 Sandra Saavedra (left), associate professor of physical therapy, and Josh Breighner ’20 with the Water Strider, which allows children with cerebral palsy to play in the pool independently. University of Hartford

Like most four-year-olds, JR Ellis loves to play in the pool. But because he has cerebral palsy, a neurological disorder that affects his muscle control, the only way he could safely enjoy the water was in his parents’ arms.

Like most four-year-olds, JR Ellis loves to play in the pool. But because he has cerebral palsy, a neurological disorder that affects his muscle control, the only way he could safely enjoy the water was in his parents’ arms.

Now, thanks to an innovative device called the Water Strider, JR was able to play in the pool independently during a test of the product. The Water Strider was designed and built by Josh Breighner ‘20, a student in the Doctor of Physical Therapy program, as part of a research project with faculty members Sandra Saavedra and Donna Snowdon.

“From a parent’s perspective, this is a game changer,” said Sara Ellis, JR’s mother. “When your child has a disability and can’t use typical water toys, you can’t just go to the store and find something that works. The Water Strider is incredible because it gives JR independence, which is something he doesn’t have a lot of. He just lit up when he used it.”

The Water Strider has been such a success that Breighner and the University have filed a patent application for it. Breighner hopes to locate a company that would help develop the device to make it commercially available in the future.

My long-term goal is that you walk into an aquatic therapy facility and see the Water Strider. It can be used for so many populations – children with cerebral palsy, or adults with spinal cord injuries.” — Josh Breighner ’20, Doctor of Physical Therapy student 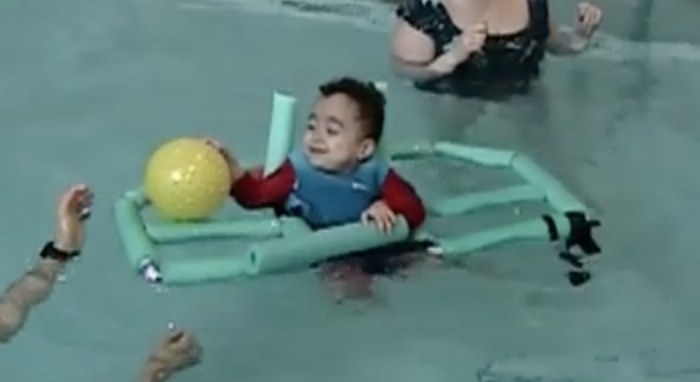 The Water Strider allowed JR Ellis to play in the pool without being held by his parents. University of Hartford

Saavedra, associate professor of physical therapy in the College of Education, Nursing, and Health Professions, studies development of trunk control in children who are non-ambulatory with a special focus on children with cerebral palsy. As part of her research, she examines how adaptive devices can help children participate more fully in the classroom and in recreational activities. 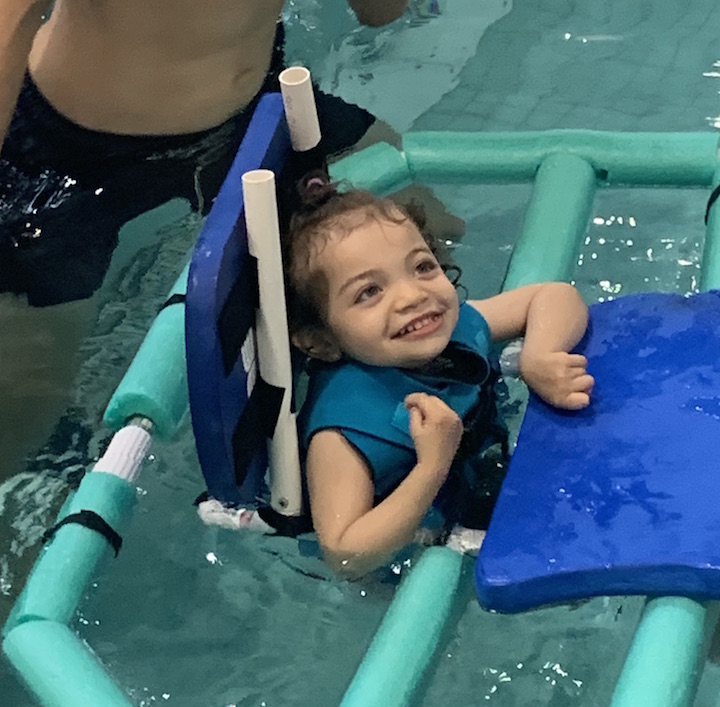 For children who need extra support, a head rest and tray can be attached to the Water Strider for added stability. University of Hartford

Commercially available pool toys don’t provide enough support to children who can’t hold their heads above water. For this project, Breighner and Saavedra wanted to develop a device that would provide enough trunk support to keep a child upright in the water and allow more autonomy and independence.

“Children who aren’t able to walk don’t get to learn how their body works in space because they can’t control gravity,” Saavedra said. “But in the pool, this device gives them the ability to be upright and explore what their bodies can do.”

Breighner designed the Water Strider with common materials such as PVC pipes, pool noodles and pool skimmers. For children with more severe cerebral palsy who need extra support, he added a head rest and tray support made from foam kickboards. The Water Strider also includes a neoprene vest with Velcro to firmly hold the child in place. 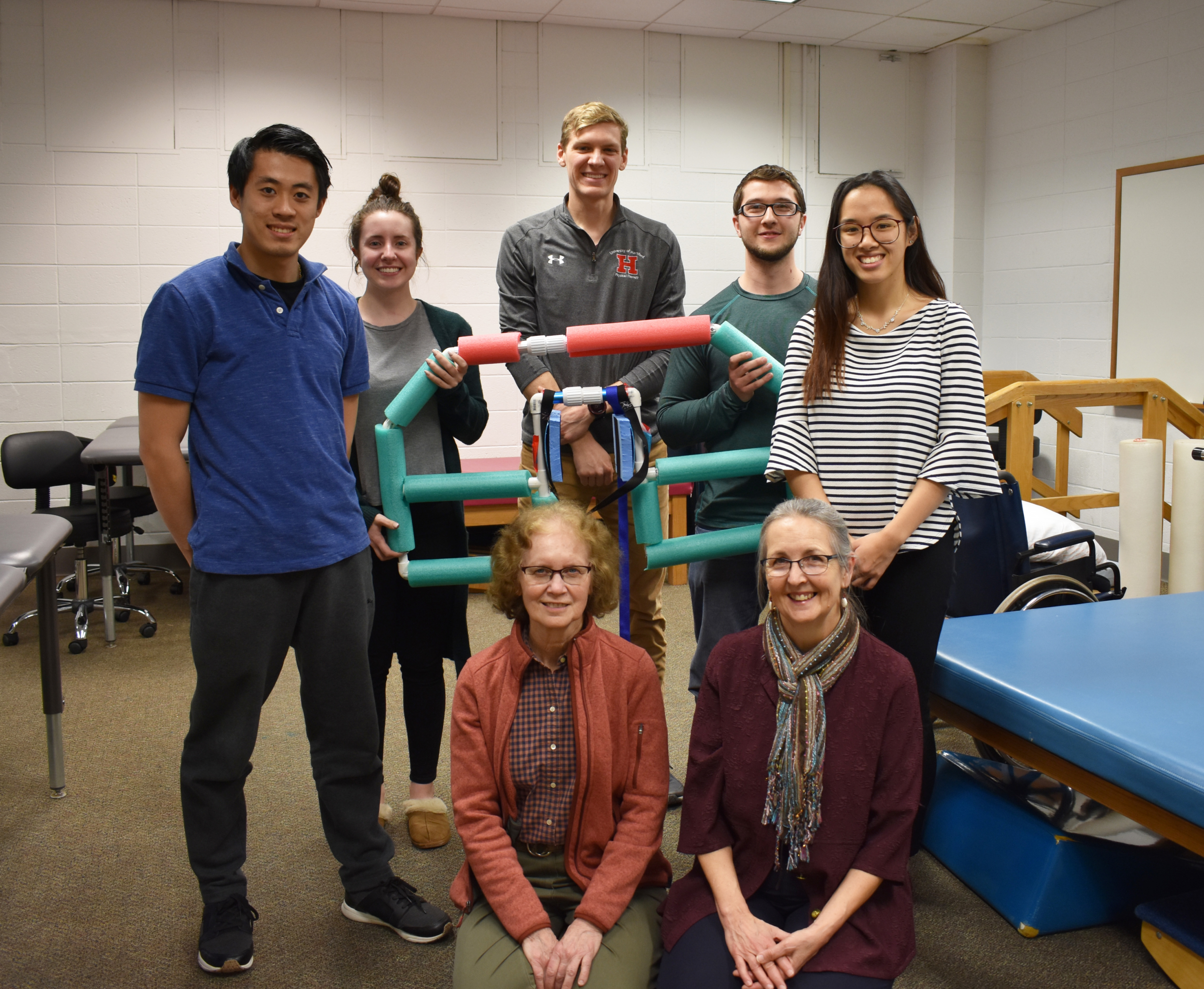 Breighner and his research team tested the Water Strider with eight children using the pool at the nearby Mandell Jewish Community Center in West Hartford in the spring and summer of 2019. The results were striking. Children with milder cerebral palsy were able to kick and propel themselves around the pool, and children with more severe cerebral palsy were able to stay upright and engage with their parents and other children in the pool. “The kids could spend half an hour in the pool and not be exhausted. It was a huge difference,” he said.

“There hasn’t been any family in the study that hasn’t wanted one,” Saavedra added. “JR’s mother also asked Josh to design a support for the bathtub.”

Breighner said the process of developing the Water Strider moved quickly, from testing a preliminary design in his bathtub to working with children in the pool in only a few months. Adding the work of the patent application was an additional challenge. “But seeing the kids enjoying it makes it all worthwhile,” he said.  Saavedra added, “Giving a child who has no independent ability in the pool that freedom is a really rewarding experience.”

Breighner is now wrapping up the data collection from the study and preparing a research paper before he graduates in May 2020. “My long-term goal is that you walk into an aquatic therapy facility and see the Water Strider. It can be used for so many populations – children with cerebral palsy, or adults with spinal cord injuries. This can help even more people enjoy being in the water,” he said.